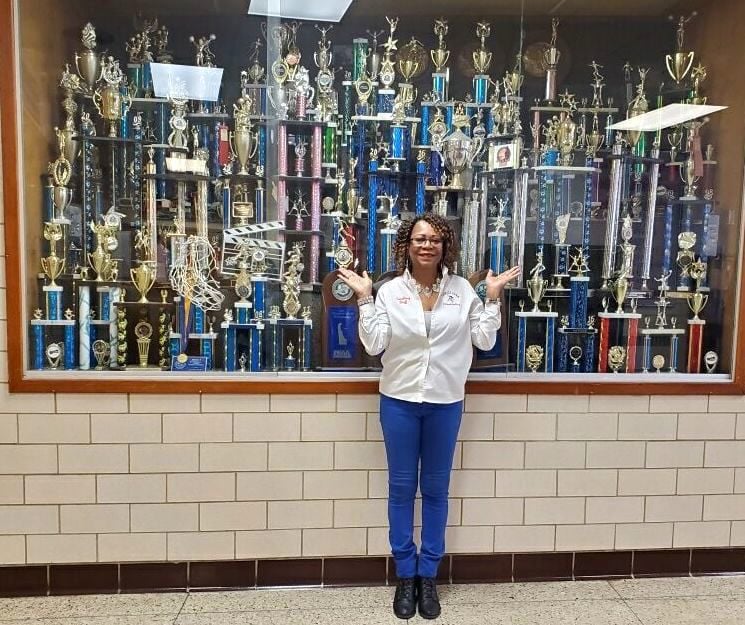 Jean Avery has been coaching so long that she has coached some of her former cheerleaders’ daughters, nieces and cousins.

Avery, popularly known as “Ms. A” or “Coach A,” is as spry as a 30-year-old. But the reality is she’s been the head coach at Christiana High School for longer than that – 38 years to be exact. During that time, between her high school team and various club teams, she has coached more than 1,000 cheerleaders.

“I’m still directly involved somehow with every kid I’ve ever coached,” she said. “I’ll email with them, they come to games, or I’ll see them out somewhere. I was a tough coach. But now look what they’ve accomplished. Every one of my cheerleaders graduated [from high school].”

Born and raised in Wilmington, Avery started cheering when she was 11 years old. She went on to cheer in middle school and at the now-closed Wilmington High School.

She attended Delaware State College in the fall of 1972 and cheered for three years before deciding to take her senior year off. Or so she thought.

“I did not cheer, but instead was asked to help with the J.V. cheer squad,” she recalled. “So that’s what I did.”

That experience was Avery’s introduction 45 years ago to coaching cheerleading and soon after graduating from Delaware State, Avery was asked to assist her sister-in-law, who was the cheerleading coach at Christiana High School.

“She didn’t know a lot of the terms, so she asked me to help,” Avery explained.

The following year, her sister-in-law went on maternity leave and Avery stepped in to take over the role of head coach. Thirty-eight years later, she is still the head coach for the Vikings.

“Wow, a lot has changed,” Avery said when asked about the differences then and now. “We went from being pom-pom shakers to athletes. It’s just not standing and leading the crowd in cheers anymore. It’s doing gymnastics and tosses and building pyramids. It’s gone from being an activity to support the teams at the schools to being a sport within itself.”

That fact was on display Feb. 2 when one of the largest cheerleading competitions in the state took place at Christiana High School. Fifty teams representing a variety of age groups gathered for the 35th annual Christiana Cheer Challenge, believed to be the longest running competition of its kind in the Tri-State area. It’s an event Avery helped start, and ironically, is one that represents her second favorite change in the sport since she became involved in it more than 50 years ago.

“Competitive cheer is now its own season,” said Avery, who founded the Delaware Cheerleading Coaches Association and last year became the first cheer coach enshrined into the Delaware Afro-American Sports Hall of Fame. “Our cheerleaders cheer for their teams Monday through Friday and then travel across the state and around the region to compete on weekends.”

When asked about her favorite change, she was quick to reply.

“That’s easy. Cheerleaders are addressed as athletes now,” she said. “That’s the biggest plus. They do conditioning, lifting, running. They weren’t always considered athletes. The last 10 to 15 years that’s changed.”

Avery retired from her career working in accounts receivable at two different companies several years ago and now works part-time as a paraprofessional at Christiana. Avery admitted she’s considered retiring from coaching often over the past eight years, but there’s one thing that keeps her coming back.

“The kids. It’s the kids,” she said. “I’ve been trying to transition out, but then I’ll get a ninth-grader who I really want to see through the program and I’ll stay around until they’re a senior. Then I’ll get another freshman. It’s the kids. I like having the one-on-one with them.”

Kennika Caesar was one of those kids.

“In 1989, I decided to try out for the Christiana cheerleading team but unfortunately didn’t make the cut,” Caesar recalled. “Most girls would have moved on but I was persistent and I continued showing up for every practice that was held in the following weeks. I was there working and practicing with the team as if I was part of them. I wore Coach ‘A’ down and she eventually realized that I wasn’t going anywhere, so she made me an official member of the team. She was stuck with me.”

After volunteering as an assistant coach for several years during and after college, Caesar joined Avery’s staff at Christiana in 2010.

“Little did we know back then just how stuck with me she was,” Caesar joked. “The Christiana cheer program has truly become a family to me. Not only has Ms. ‘A’ coached me, but she has coached my sister, Nadaya, and my daughter, Kierra. Not many coaches have the opportunity to coach second and third generations like Ms. A has. She has had such an impact on my life in so many ways. She has been there every step of the way – through graduations, my wedding, the birth of all of my children. She is definitely one of the family and now I have the pleasure of coaching with her.”

Caesar, along with Christina Bader, both play major roles in organizing the Cheer Challenge. Bader met Avery in 2000 when the cheer team she was coaching practiced at Christiana High.

“From the moment I met her, she was a coach that I inspired to be like and over these past 20 years, I have learned so much from her and she has become one of my nearest and dearest friends,” Bader said.

Bader would later cheer on an adult all-star team that was coached by Avery.

“Her athletes carry the highest respect for her and love cheering for her program,” Bader said. “She has accomplished so many things and has done so much to help grow the sport of cheerleading in the state of Delaware.”

Avery has led Christiana to nine state championships and four national titles, but admitted that’s not what has brought her the most satisfaction as a coach.

“I love seeing the camaraderie between the girls,” Avery explained. “Developing true friendships and depending on each other, even after the season. They stay in contact and support each other. I tell them it’s not all about winning as long as you did the best job you could when you hit that floor. Be proud of what you did. That’s the best feeling. I love the smiles on their faces when they come off the floor knowing that they did a good job.”

When she sees those same smiles years later, whether it’s at a game, a cheer competition or just crossing paths in public, her former athletes always thank her for what she did for them. And it’s then when Avery knows she’s made a difference.

“My motto is your life should be in this order and you should never forget it: family, school, cheerleading,” she said. “If you keep those in mind, you’ll persevere.”