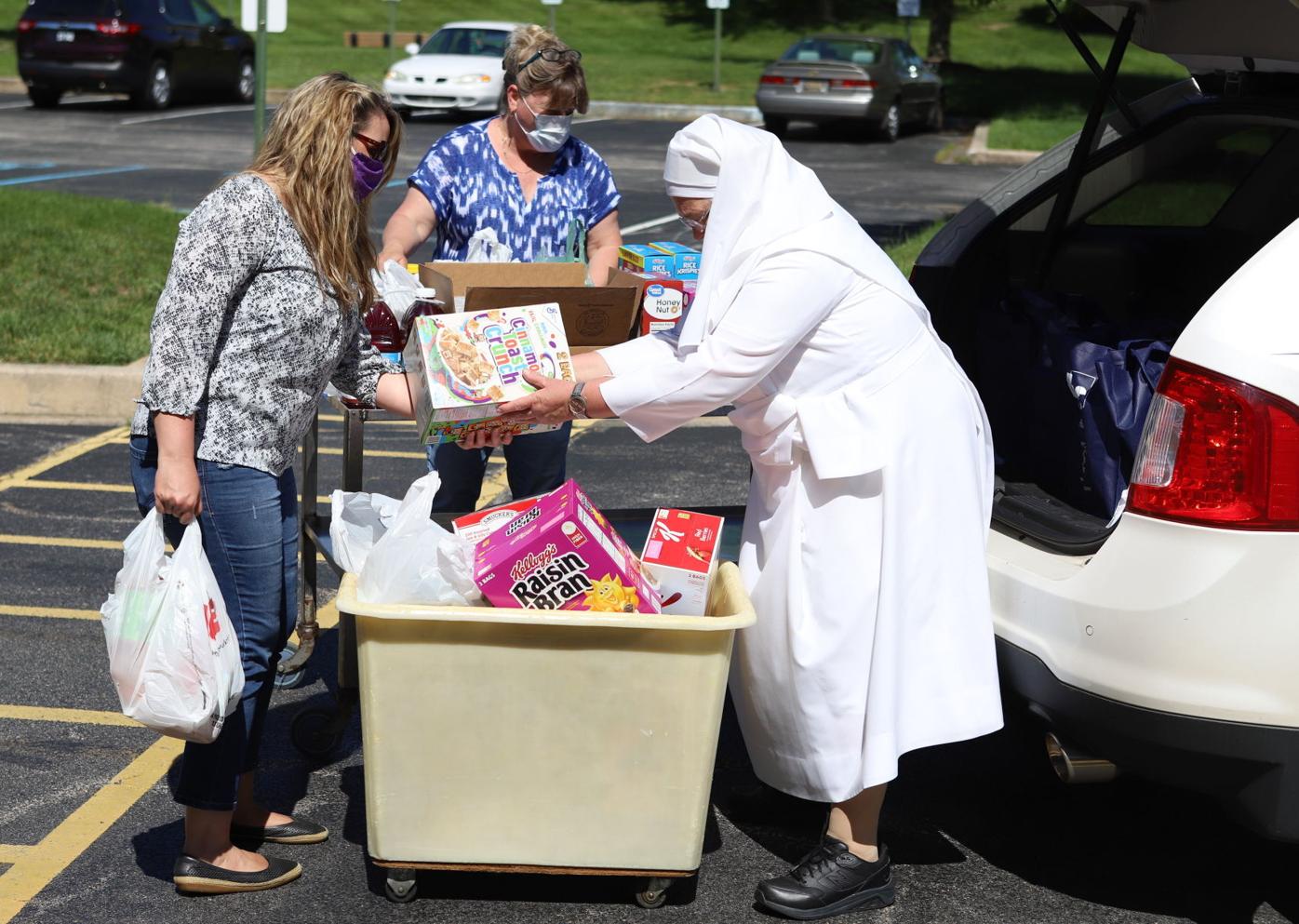 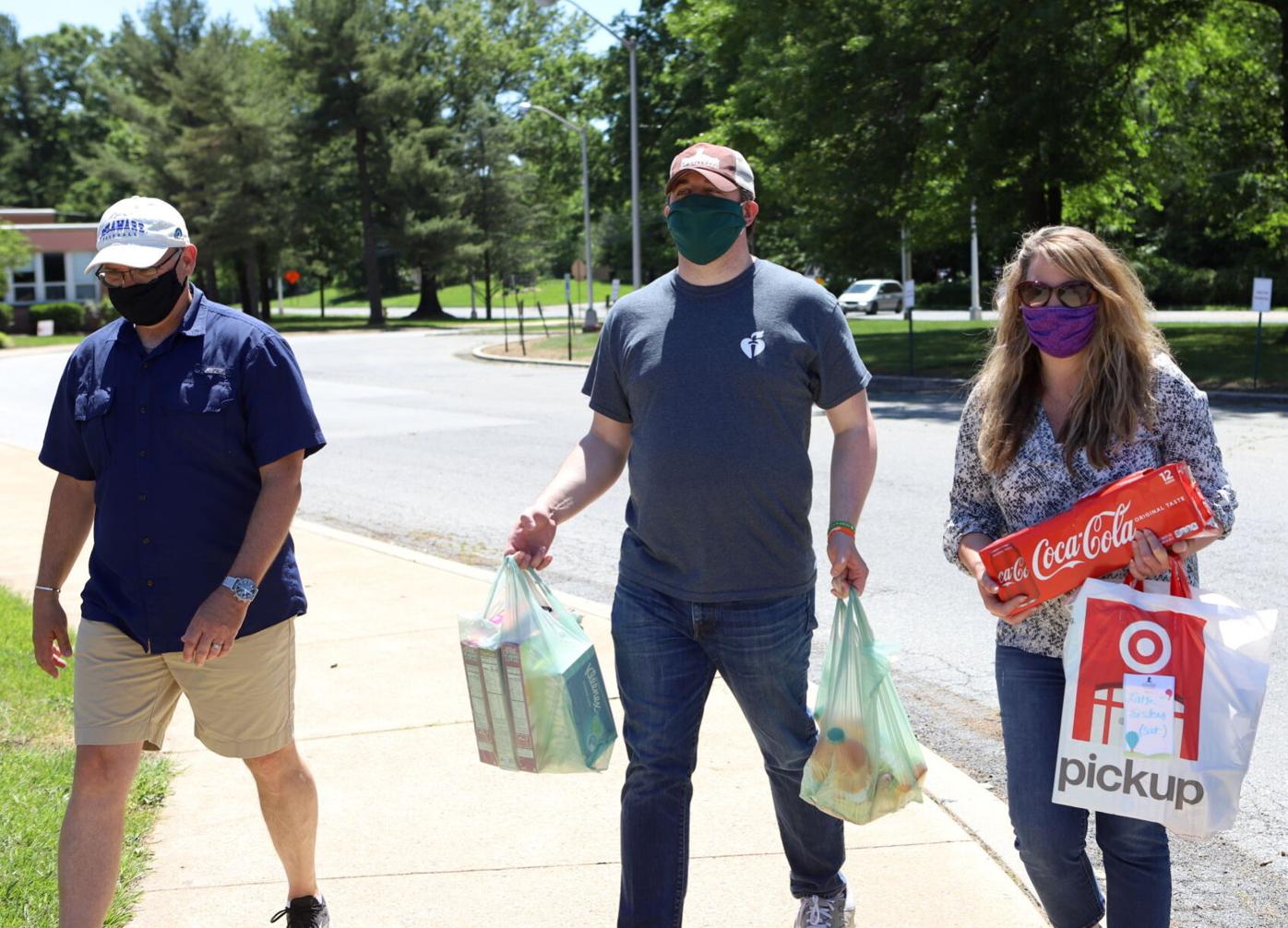 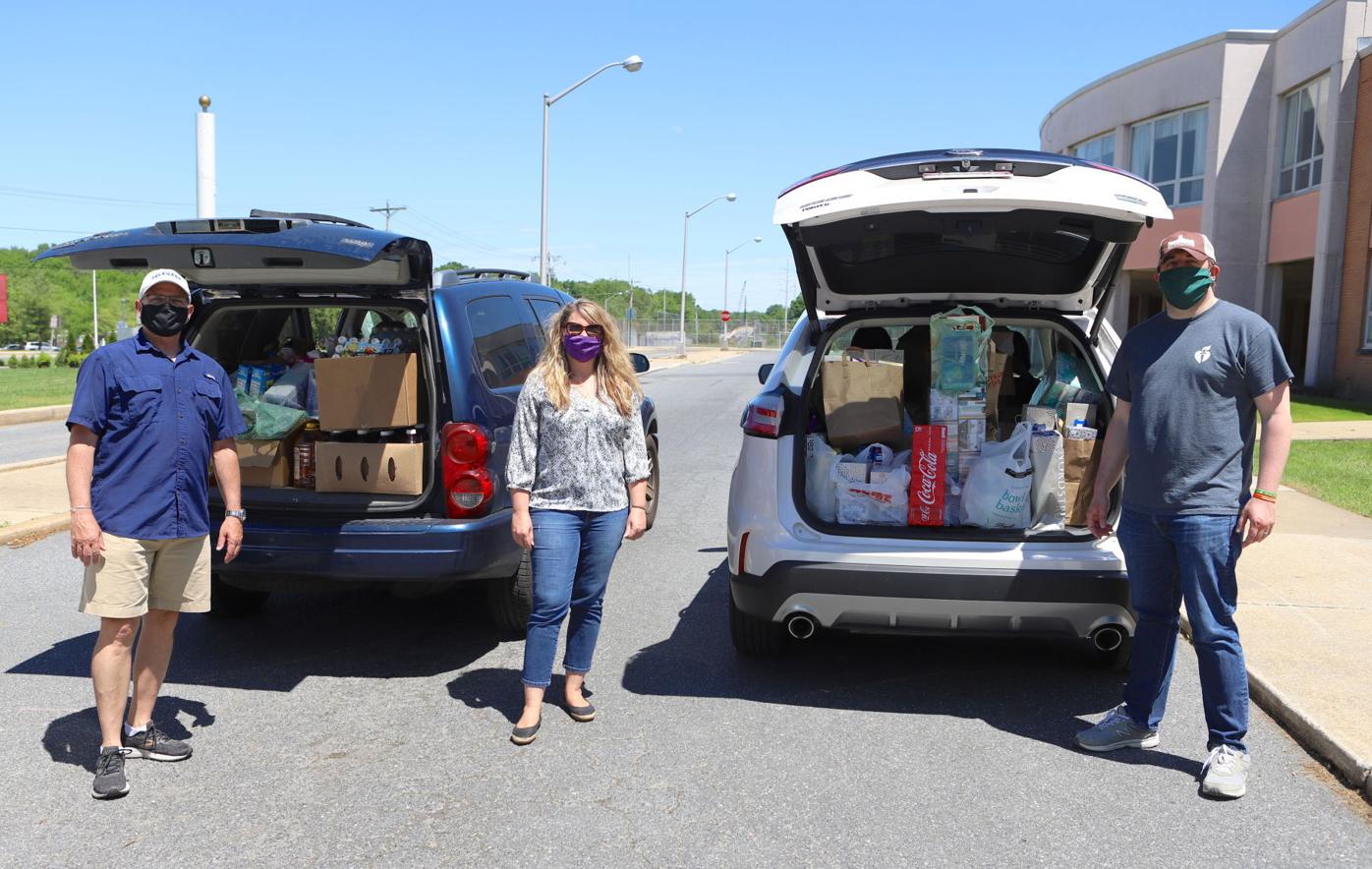 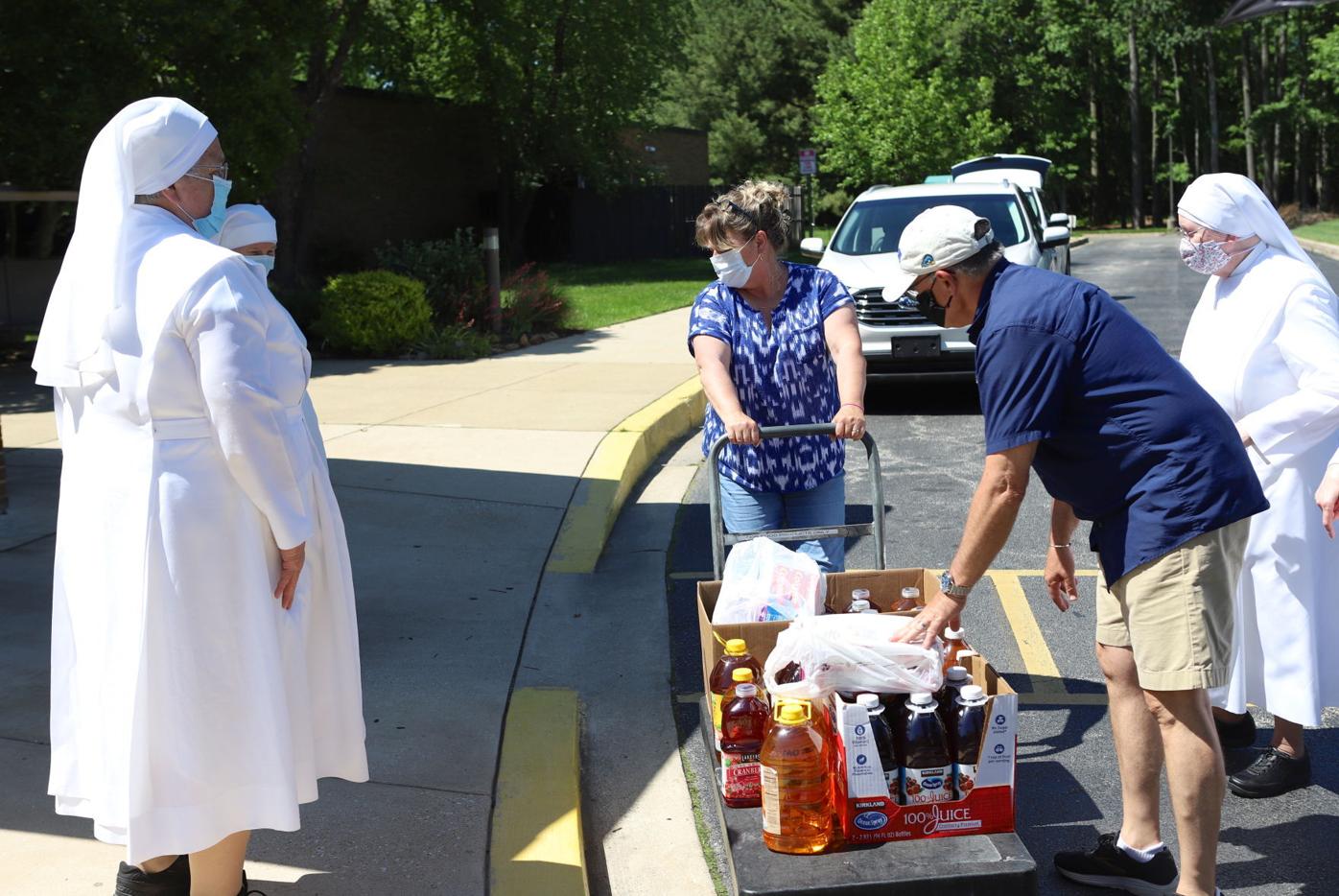 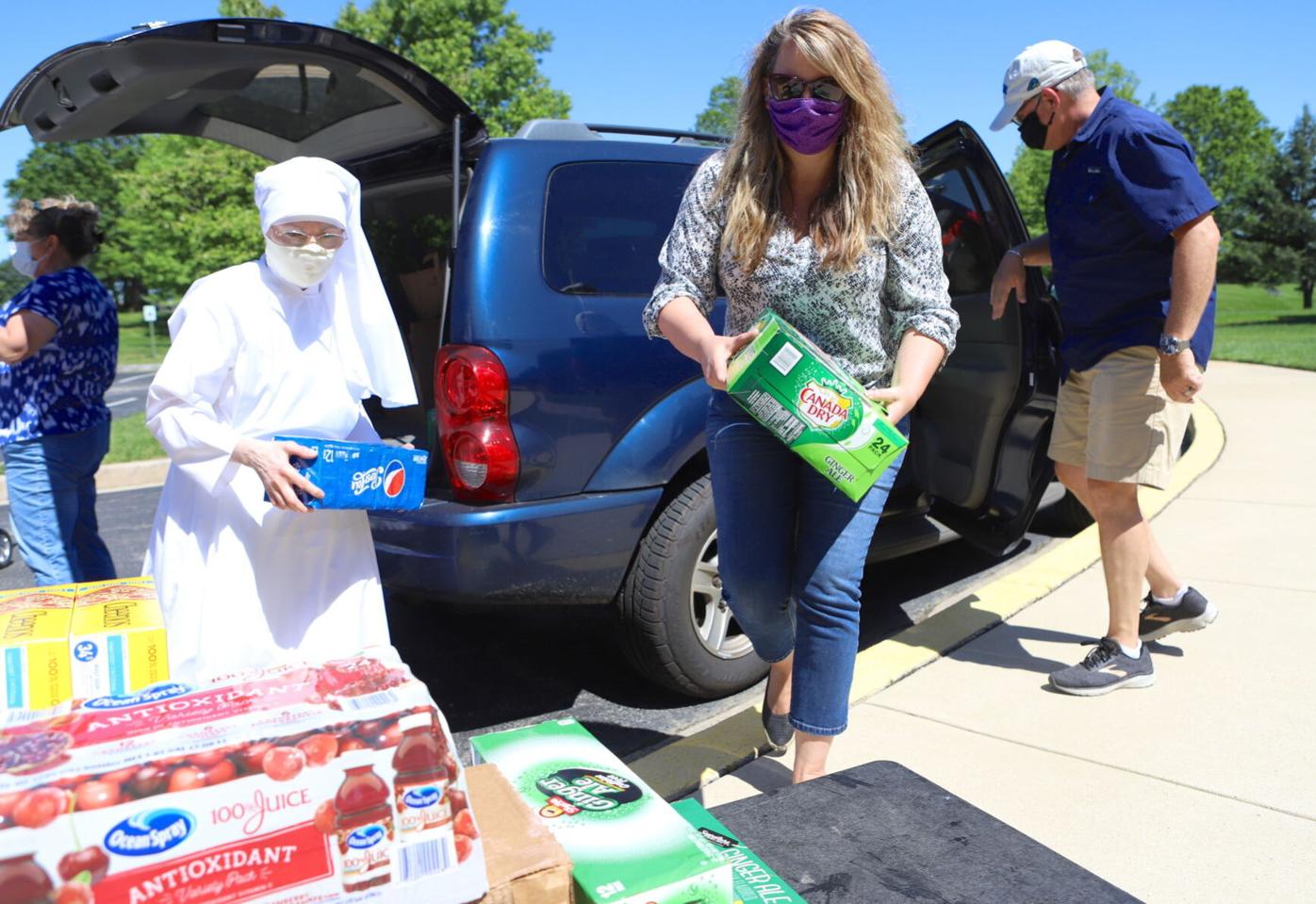 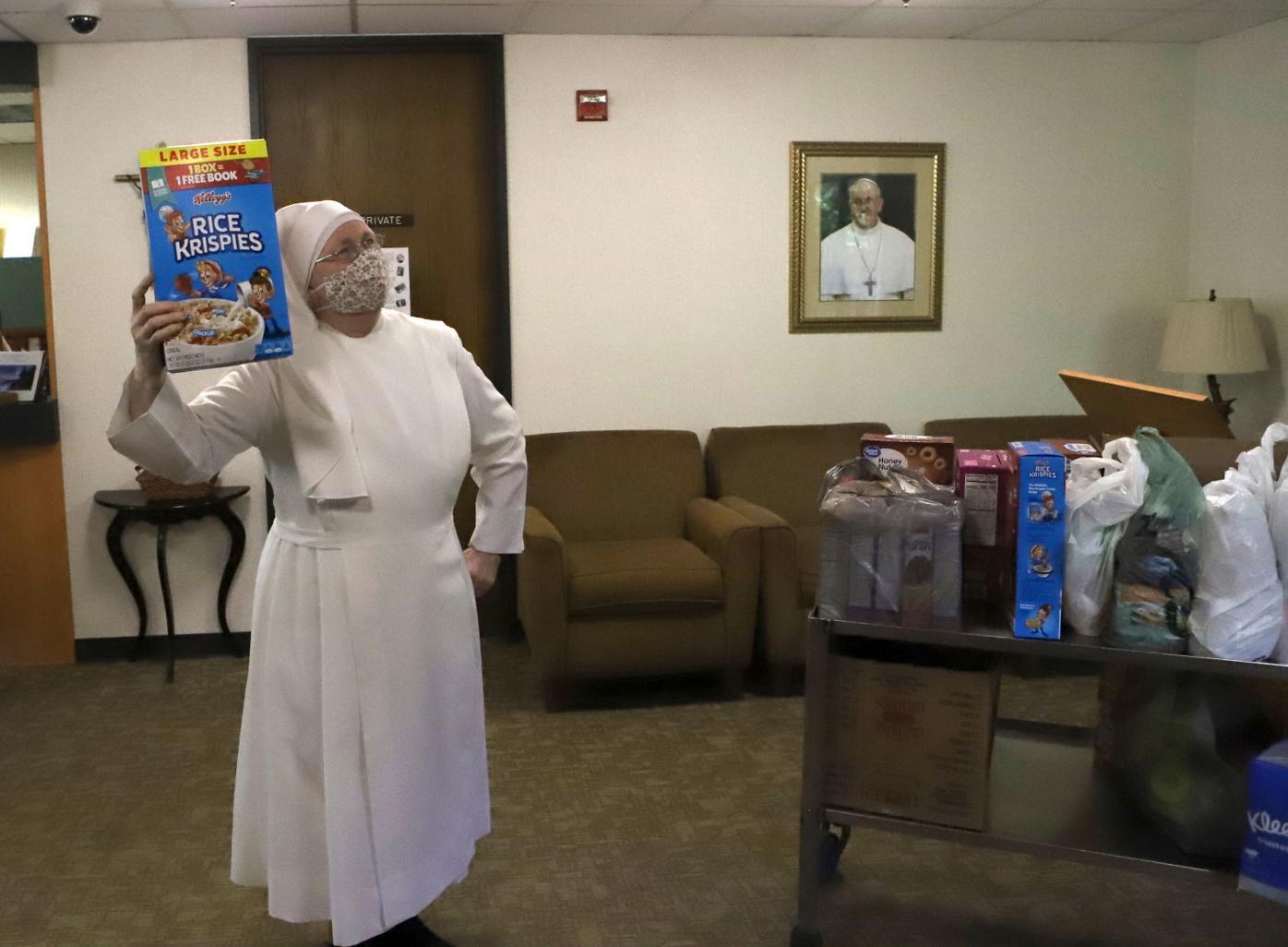 Donated food is held up to a camera in the lobby of Little Sisters of the Poor so residents could see it via a closed-circuit television system. 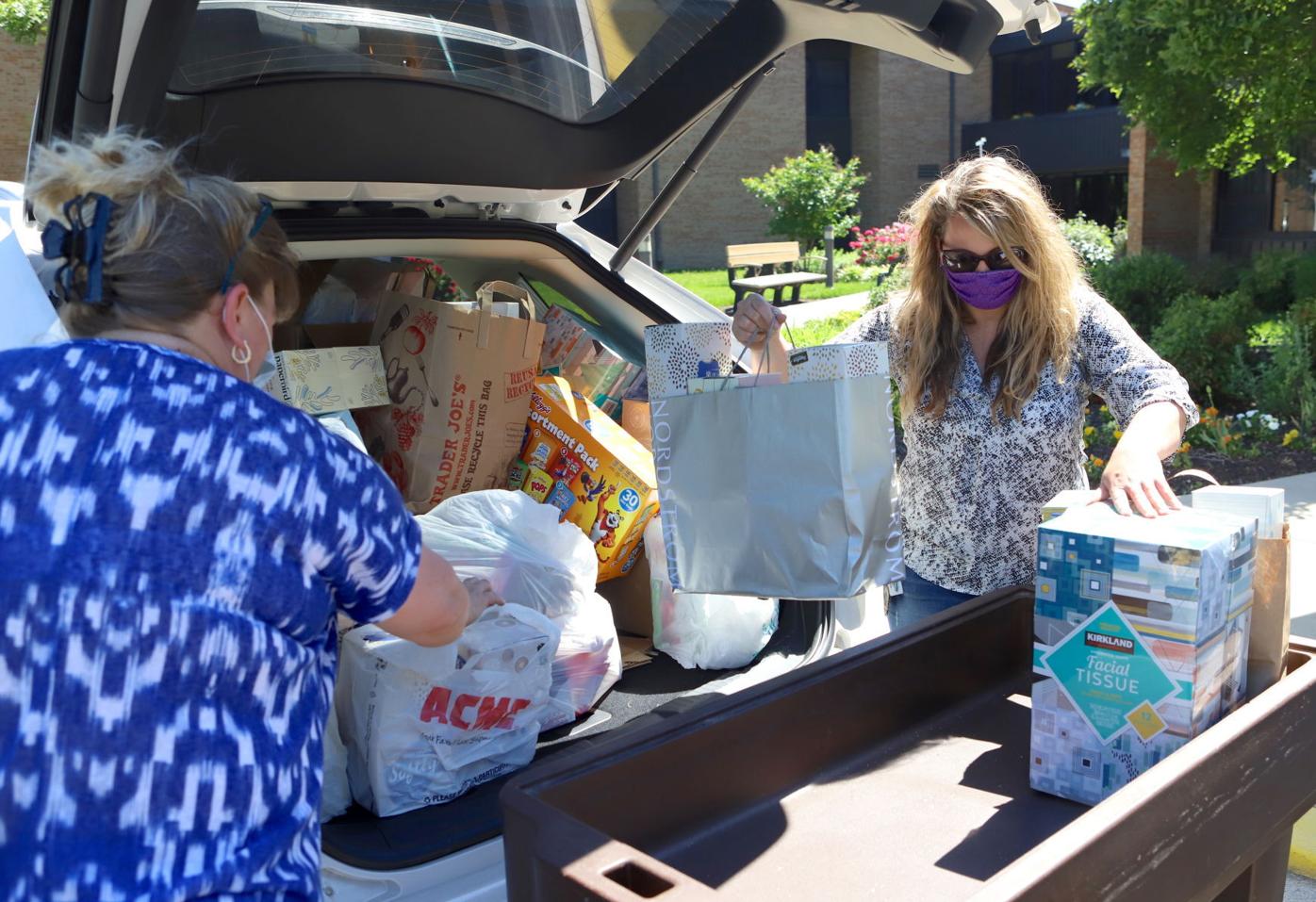 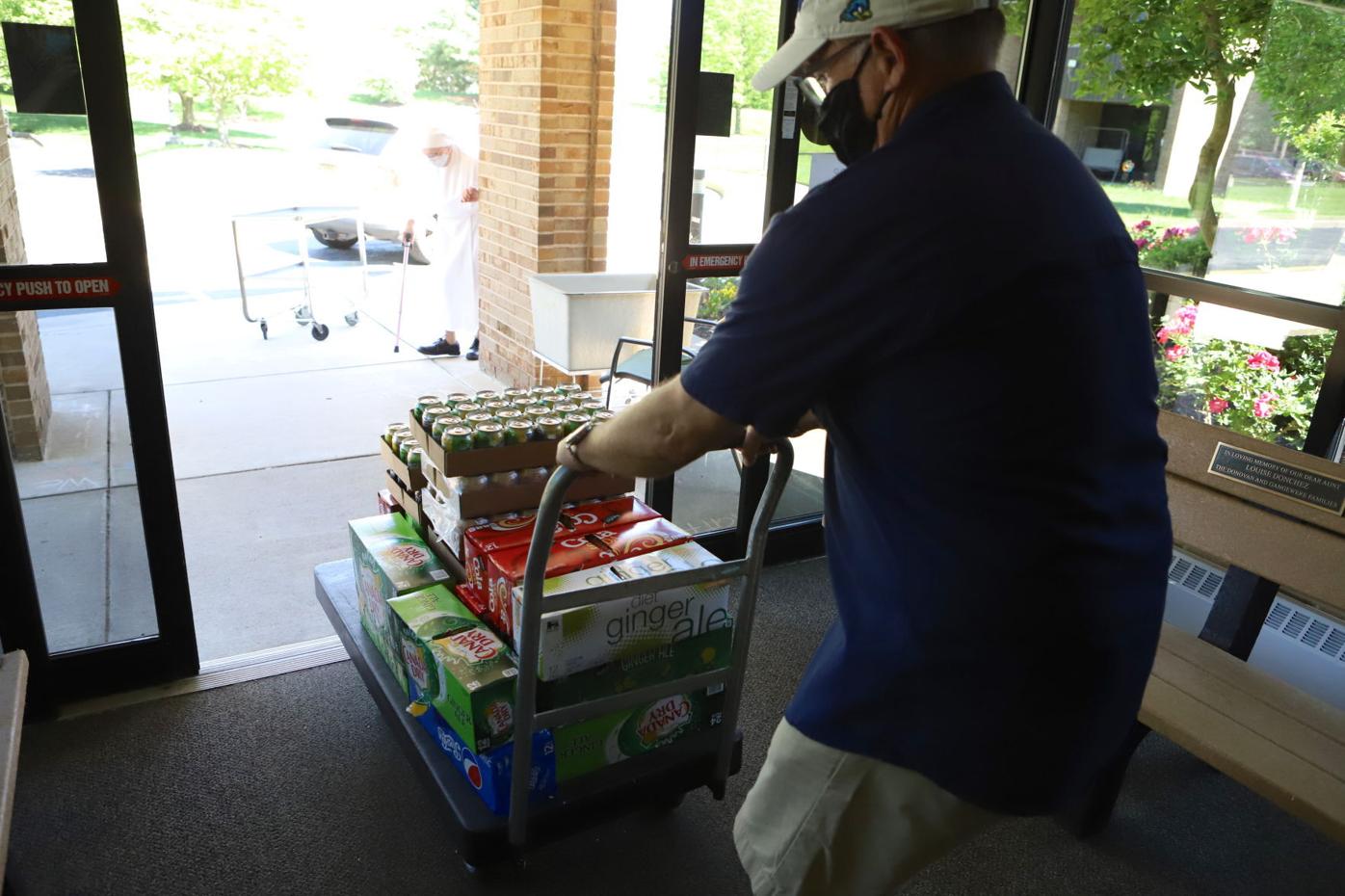 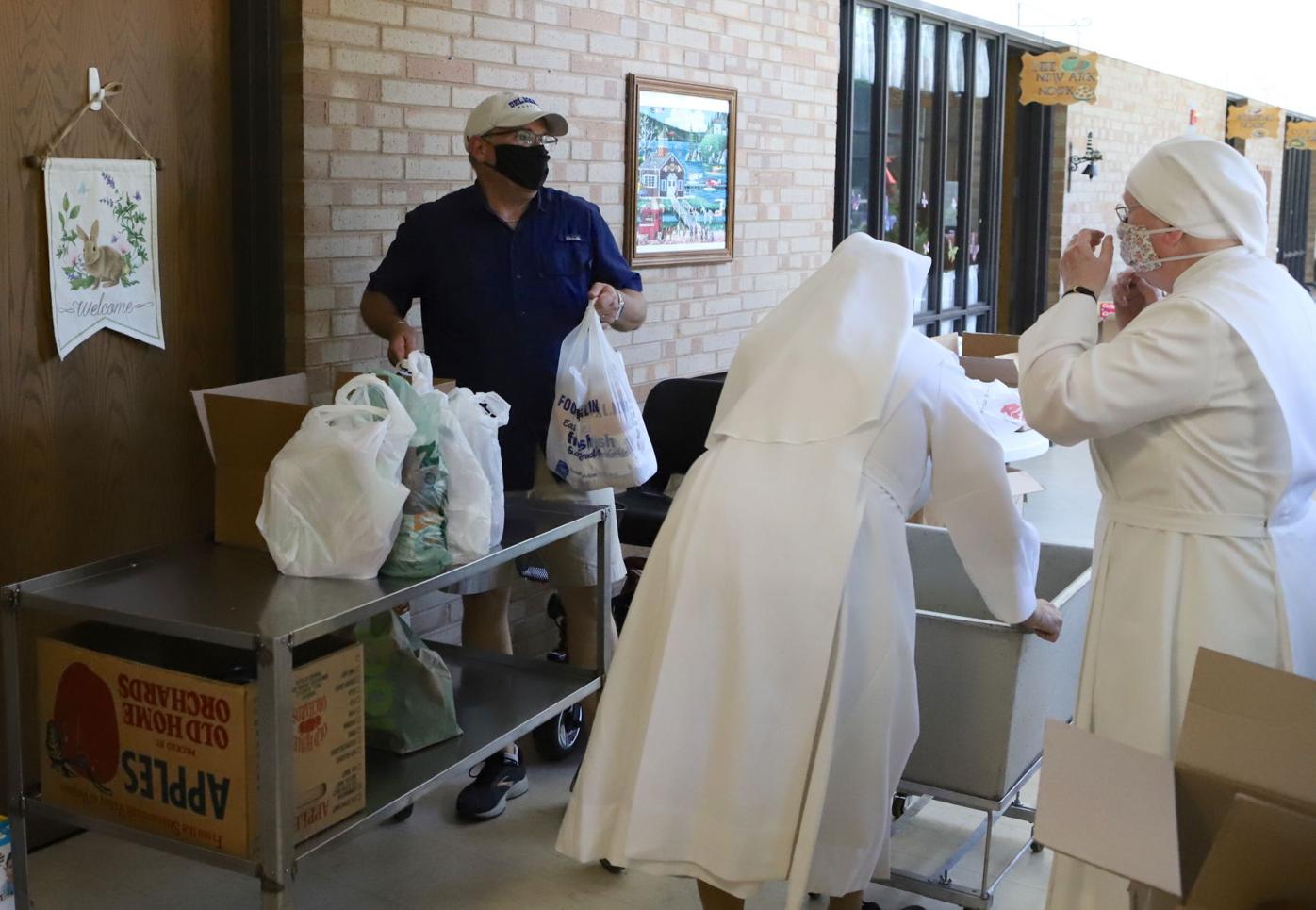 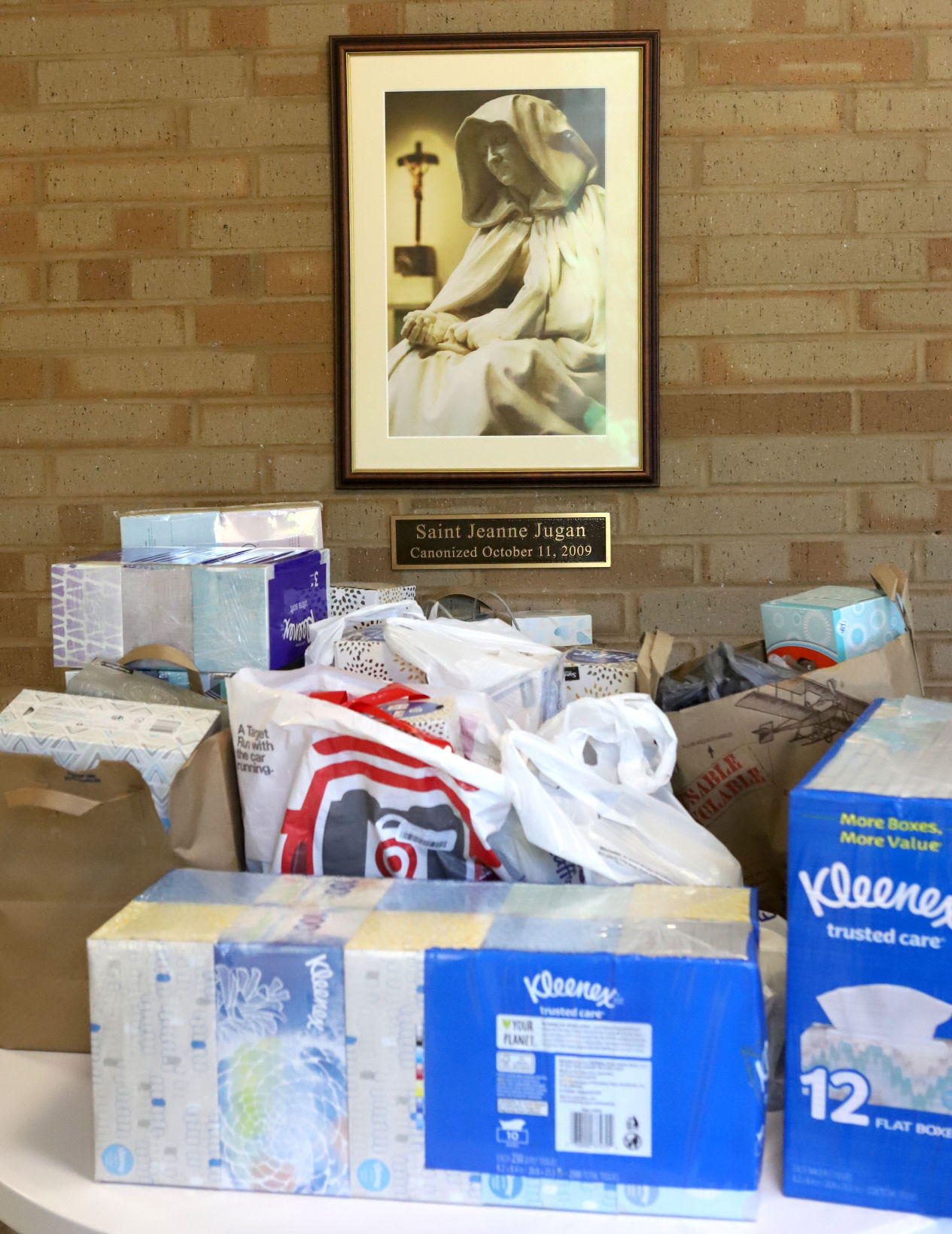 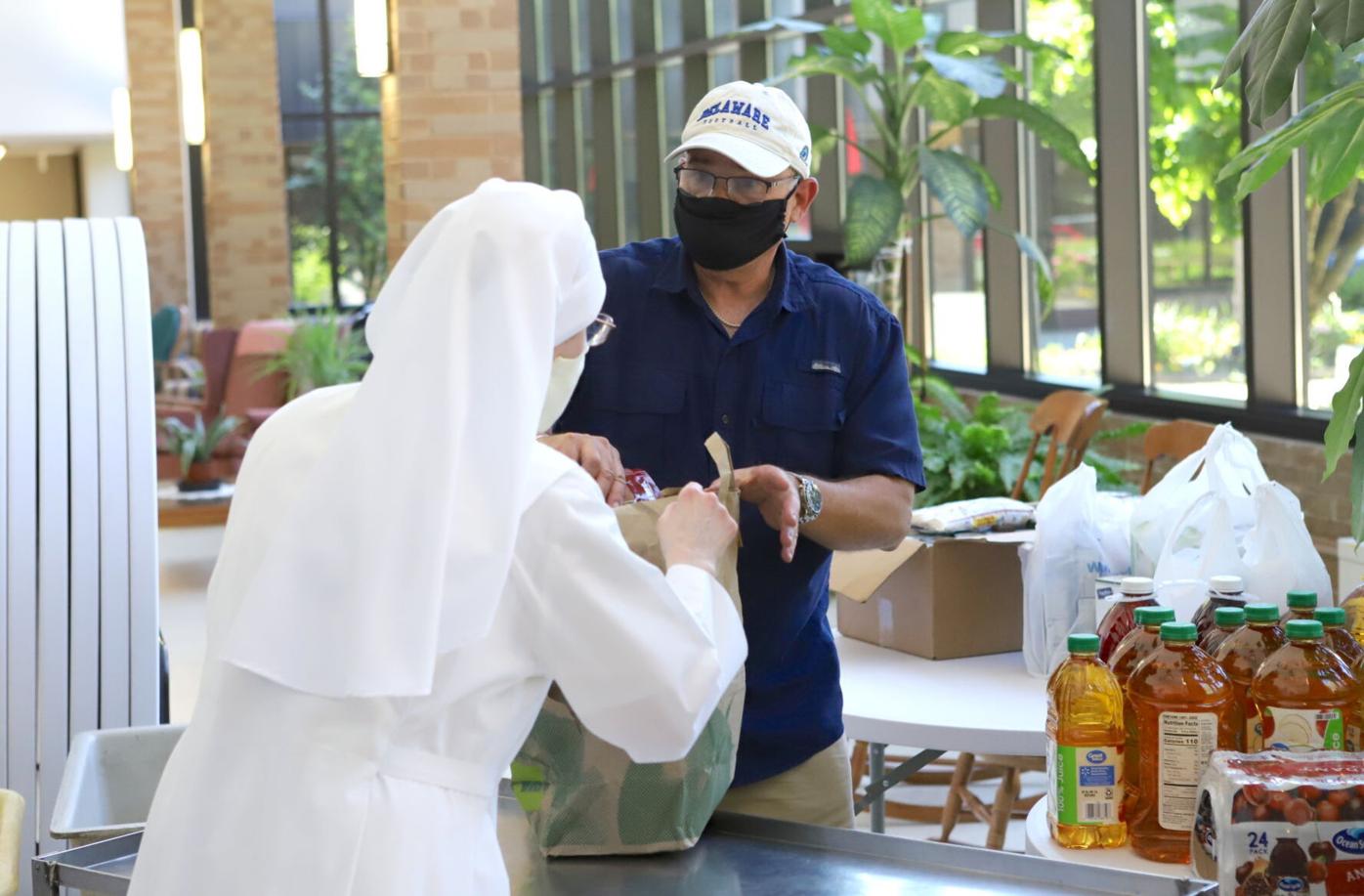 Donated food is held up to a camera in the lobby of Little Sisters of the Poor so residents could see it via a closed-circuit television system.

Tears well up in Mother Margaret Regina Halloran’s eyes when she talks about the support Little Sisters of the Poor has received from the greater Newark community as it battles a devastating coronavirus outbreak.

From the moment word spread of the facility’s first case, people reached out to donate money and supplies. Horticulture students from Christiana High School donated plants for each resident. A nurse from ChristianaCare raised money online to buy Easter baskets for the residents.

“We’ve been so touched by the goodness of people in the local community,” Halloran said. “We’re overwhelmed. From the first day, they’ve been there to help us.”

The latest example of that support came Saturday, when a food drive collected hundreds of items requested by the Little Sisters of the Poor’s Jeanne Jugan Residence, which serves 66 low-income seniors and includes nursing care rooms, independent living apartments and rehabilitation facilities.

For four hours Saturday, a steady stream of people pulled into the parking lot of Christiana High School to drop off items such as juice, soda, jam, tissues, cereal and more. Some dropped of a few items, while others showed up with their trunk full of more than $100 worth of food. One person said she had just gotten home from the beach, read about the food drive and rushed to Walmart to buy food to donate. Another said he didn’t have time to buy food, but dropped off cash instead.

“It’s been a tremendous outpouring today,” Townsend said. “At a time when there’s so much tension around the country, today is an inspirational example of the community coming together.”

Jones said the food drive is just one small example of the support Little Sisters of the Poor has in the community.

“It shows how endeared they are,” she said.

Townsend noted that because of the virus, the volunteer groups and others that normally support the facility have been forced to stay away.

“For that interaction to be on hold is one of the many sad results of the pandemic,” he said.

After the food drive was over, Osienski, Jones and Jones’ friend Renee Taschner delivered the three carloads of food to the nursing home.

The residents are still confined to their room, but the facility has a camera in the lobby that residents can watch through a closed-circuit television system. The Sisters got on the public address system and asked residents to turn on the camera stream while Osienski, Jones and Taschner displayed the donated food and waved to the camera so the residents could see the community support.

Little Sisters of the Poor was the first Delaware nursing home to be hit by the coronavirus, and 11 residents succumbed to the virus in late March and early April. Since then, the situation has improved, and on May 13, the Delaware Division of Public Health declared the facility coronavirus-free, and residents were able to leave their rooms for the first time in nearly two months, Halloran said.

However, the state later decided to test the 17 nursing home residents who had not previously been tested. Four who were asymptomatic tested positive for coronavirus, meaning the facility is once again locked down. The Sisters are still awaiting results for residents of the apartments.

So far, the four patients are doing well, Halloran said.

The first few weeks were tough on everyone, from the residents to the 11 Sisters and the 123 staff members who work at the facility.

“We were counting on one another and counting on the Lord’s grace to get us through,” Halloran said.

In normal times, the sisters stay beside residents in their final hours, offering prayers and comfort. But, due to concerns about spreading the virus, they weren’t able to do that for the 11 coronavirus patients who died.

“It was very hard,” Halloran said.

For each dying patient, one family member was allowed to visit 20 minutes, but others had to remain outside.

“That was very heartrending,” Halloran said.

She credited her “tremendous” staff, as well as Sisters from neighboring states and staff members from ChristianaCare who came to help out during the worst of the outbreak. ChristianaCare nurses took care of the coronavirus patients, while the facility’s staff focused on the others. ChristianaCare also used telemedicine technology to allow doctors to consult with patients via iPad.

“We really felt supported by the goodness of God and his people,” Halloran said.