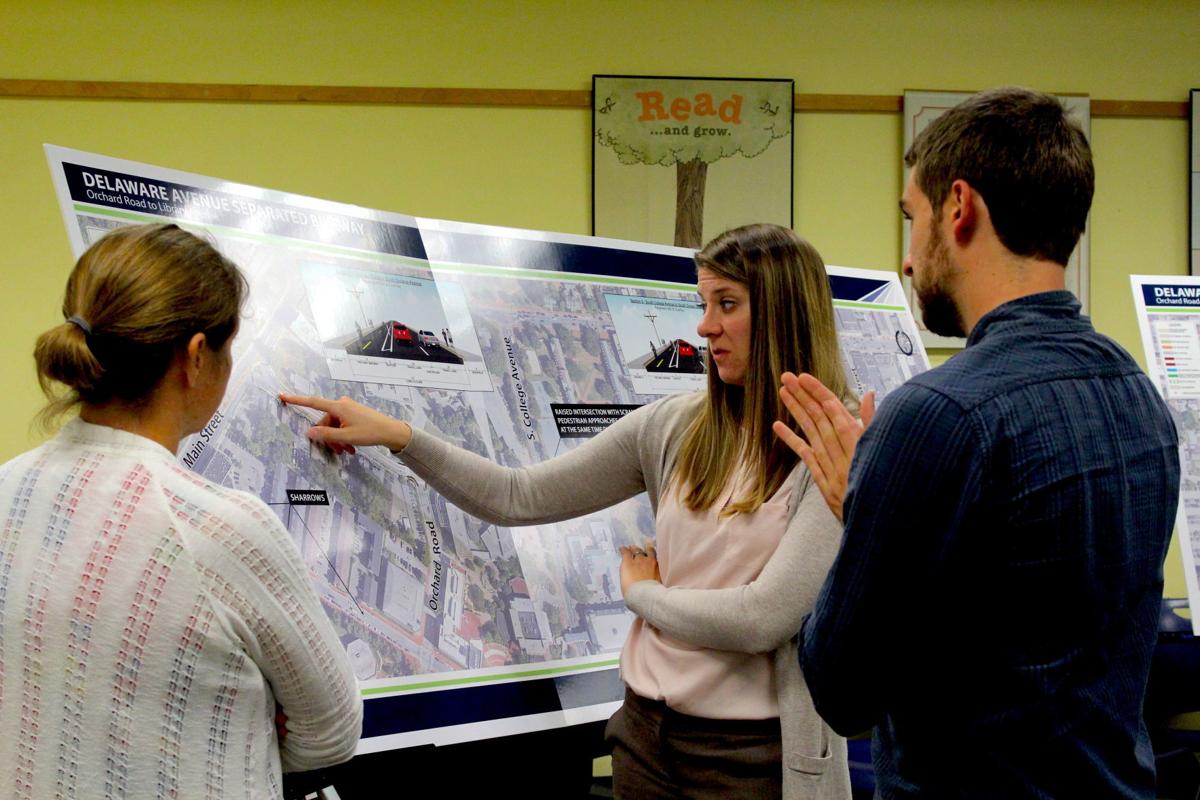 The Delaware Department of Transportation held an information session Monday about the construction of a cycle track on Delaware Avenue. The track has been in conversation since 2014, but looks like it could see construction beginning in the summer of 2021. 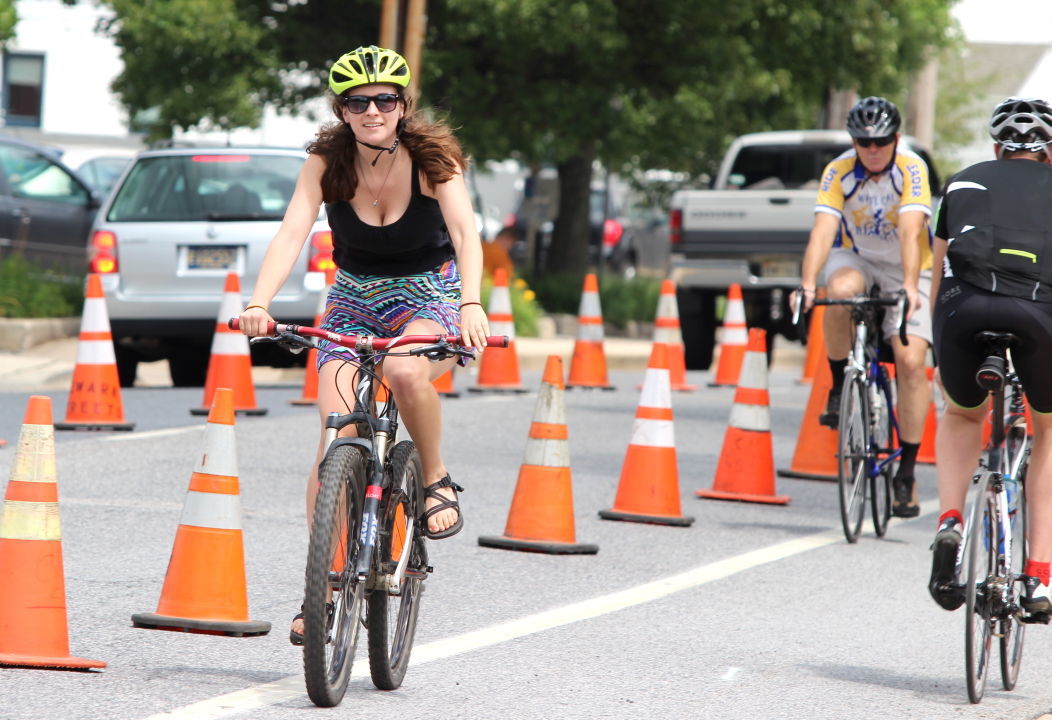 Cyclists test a prototype of the two-way cycle track proposed for Delaware Avenue during an event in 2015.

After four years of conversation, the details of a proposed cycle track for Delaware Avenue got clearer this week.

A cycle track, or separated bikeway, is a one- or two-way bike lane that separates cyclists from traffic. It would be the first of its kind in Delaware.

The Delaware Department of Transportation held a public workshop at the Newark Free Library on Monday night to elicit feedback on the project.

Tom Brooks, project manager for DelDOT, said construction is slated to begin following the completion of work on Main Street, likely in 2021.

Work will take place over two summers, and one lane will remain open at all times to keep traffic moving through the area.

“We just need to make sure traffic flows,” Brooks said. “That’s the biggest thing these projects, for construction, to maintain traffic.”

Because vehicular traffic on Delaware Avenue is one-way, the two-way cycle track will require cyclist-only signals.

Like a traffic light, the bicycle signals will have a bicycle-only green light, where bicyclists will move through an intersection conflict-free. A flashing yellow light will appear when motorists have a green light, meaning that bicyclists may move through the intersection but it warns them to be wary of motorists. A shared red phase and a shared yellow phase work the same as typical traffic signals.

“That was something that our traffic section with DelDOT had to go to [the Federal Highway Administration] and ask for permission to try this,” he said. “We’ll try it out, we’ll analyze it after it’s done and report back.”

According to a timeline, an evaluation will take place in 2022.

The conversation regarding the cycle track first began in 2014, when city council unanimously voted to approve the Newark Bicycle Plan, which included the proposed track.

The reason for the track boils down to safety.

“Cyclists are going in the opposite direction, which is illegal and it’s not safe,” Brooks explained. “They can use Main Street; Main Street is a little more congested with traffic. Here, we identified a location where you could get in the westbound cycle track to get people westbound, so it made sense.”

As Brooks explained, despite the fact Delaware Avenue has a one-way bike lane, cyclists are currently biking against traffic.

In 2015, DelDOT set up a temporary cycle track as a way to gauge if the proposed width and design would properly accommodate cyclists. The prototype was positively reviewed by the nearly 100 cyclists who participated in the test that year.

Since then, the biggest change has been switching the side of the road the track will appear on.

“The cycle track test was on the south side, and we’ve moved everything up to the north side,” he said. “I think the right turns were the biggest concern – how to deal with the two-lane bike track with traffic making a right on red. That was a big conflict in all these locations.”

Brooks explained that after the test in 2015, WLMAPCO, the city of Newark, University of Delaware, Bike Delaware and DelDOT met with a design consultant to hash out details.

“The city has been great with this project,” he added. “They’re part of the group that really wanted to see this happen, them and the University of Delaware, so the city’s been great to work with.”

The event on Monday evening was meant to answer the community’s questions and explain the project to residents.

“It sounds pretty positive from our discussions with the community,” Brooks said. “So far it’s been a pretty good turnout for a DelDOT project.”

Tired, you nailed it. BOOM!

No, no, no.... Stop it with the bikes already. Roads are for cars. The bikes are a menace. They never stop at the lights, they ride in the wrong direction, they ride on the sidewalks, the bike lands and the roads - basically, they ride wherever they please - even between cars when they can scoot through. They need to stop catering to the bikes and allow the cars to actually use the roads that they are supposed to use. Now, maybe I'll feel differently when I see bikes actually follow the law and bikes that are tagged and registered. At this point, the bikes pay nothing for the roads that they ride on - the cars are stuck with the bill. Maybe if the bikes paid towards the roads, they could use some of them.

Will wait for the first bicyclist, heading "against traffic flow" to be hit head on......then will see who sues who for negligence !!

Why not require bicyclists to pay for a license? After all, the citizens are funding all these projects and the bicyclists ride for free. Why won't they post how much this will cost?

Enough, Mayor Polly, enough. Bicyclists have been catered to and pampered ever since Mayor Polly got in to office. We all know she likes to ride her bike a lot, but considering how many taxes she has raised on the citizens of Newark to support her obsession, enough is enough. Lower taxes, encourage new businesses to come to Newark. Act like a real mayor. There must be a handbook somewhere.

OK Winkie-------it may be time to let this one go. It will be built: for the bike rider's safety I am all for it. There seems to be very generous project managers at DOT who are OK with renovations to both Cleveland Ave. and Delaware Ave. for bicycle rider's safety. Again...............let's let it go.

"generous project managers at DOT" what does that mean. They work for us. You do now that right?

What that means is that they are "state employees" designing bicycle paths on "state roadways" in Newark. Can you think of any other city in this state that devotes this much effort in the transportation of bicyclists, and transporting them on state maintained roadways?

I cannot think of another city. Those other cities live within their means and don't raise taxes every few days to pay for little pet projects Pull your head out.

My head is out. And it was out five years ago when I was moving to the Newark area. I purposely stayed out of the City limits because of the utility costs and other incidentals. Now "Citizen of Newark" --- pull your wallet out.

Newark, like the State of Delaware is insisting on catering to the demands of the bicyclists. Ok; they're vehicles (Says DelDOT). So why can't they ride in the same direction as other vehicles? And stay in Bike Path? East on Del Av; West on Main. Done.

And pay registration fees and a use taxes to support these projects just like drivers do.

Will they be adding the new bike lane tax to our water bill to pay for all of the bike mafia's pet projects?

----The conversation regarding the cycle track first began in 2014, when city council unanimously voted to approve the Newark Bicycle Plan---- POLLY SIERER WAS ELECTED MAYOR IN NOVEMBER 2013....SHE STARTED ALL THIS !!!!

Notice that they PURPOSELY didn't post any $$ COST OF LIGHTS AND $$ COST OF LANE PAINTINGS or what taxes will be raised to pay for all this !!

----The conversation regarding the cycle track first began in 2014, when city council unanimously voted to approve the Newark Bicycle Plan---- POLLY SIERER WAS ELECTED MAYOR IN NOVEMBER 2013....SHE STARTED ALL THIS !!!!

-----“That was something that our traffic section with DelDOT had to go to [the Federal Highway Administration] and ask for permission to try this,” he said.---- MORE NONSENSE FROM POLLY SIERER !!!