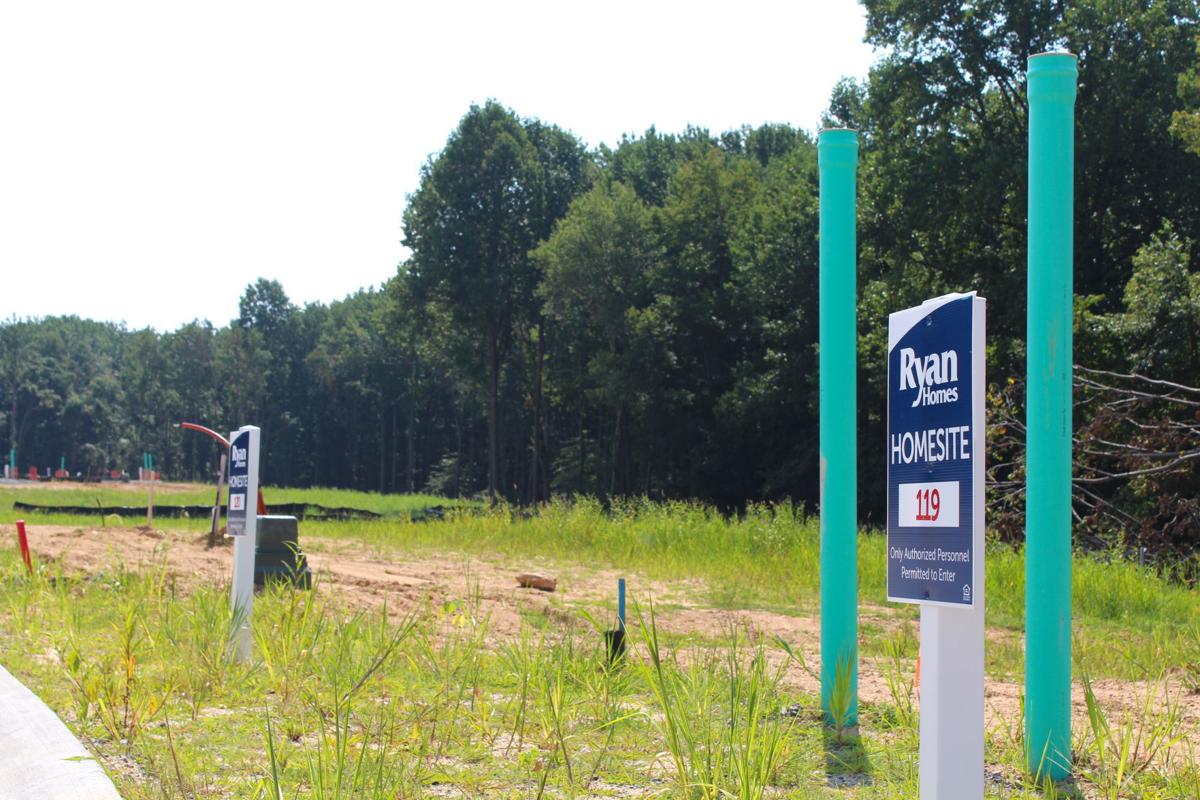 A series of proposed trails, slated for the wooded area behind the former Our Lady of Grace orphanage property, remains in limbo despite having state funding. 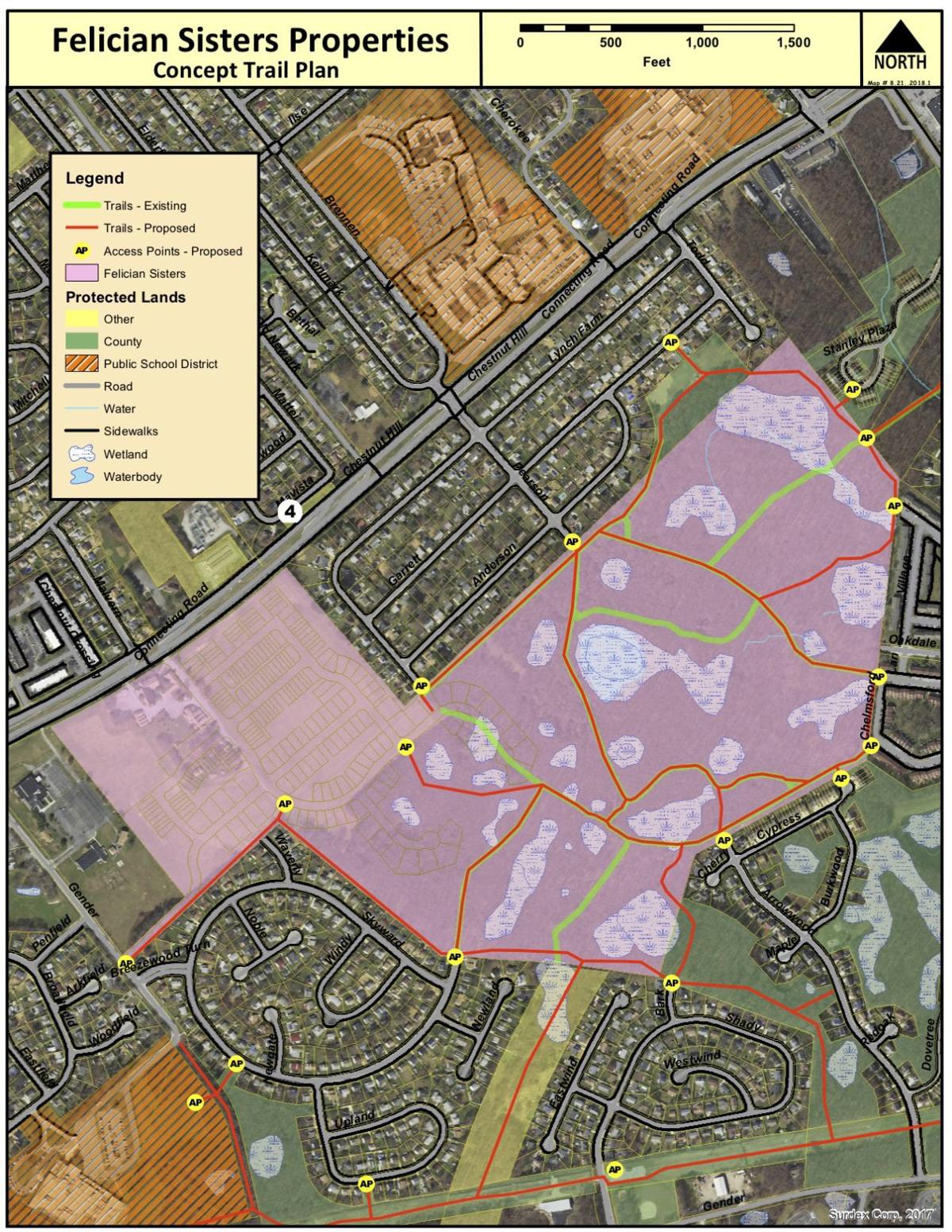 The proposed plan for trails behind the former orphanage property on East Chestnut Hill Road include multiple opportunities for looping, with a variety of access points for the communities nearby to the land.

A series of proposed trails, slated for the wooded area behind the former Our Lady of Grace orphanage property, remains in limbo despite having state funding.

The proposed plan for trails behind the former orphanage property on East Chestnut Hill Road include multiple opportunities for looping, with a variety of access points for the communities nearby to the land.

For the second year, trails proposed for the wooded land behind the former Our Lady of Grace Orphanage are stuck in limbo.

The trails, which would be funded by the state, are intended to let residents of surrounding neighborhoods – such as Scottfield, Breezewood, Todd Estates, as well as the future residents of the neighborhood being built at the orphanage site – enjoy the property.

The project, however, remains stalled after the developer decided against signing an easement that would make the wooded area open to the public.

The issue relates to the 181-acre property at 487 E. Chestnut Hill Road, east of Newark.

Work is underway on the 260-home Chestnut Hill Preserve neighborhood, which drew fierce opposition from neighbors, who wanted the site to become a park instead. State and county officials approached the Felician Sisters, which owned the property, but the deal fell through.

“Initially, we thought the area was in need of a county park and that’s why Sen. Bryan Townsend and I did pursue that route with the county,” said State Rep. Ed Osienski. “When that did not happen, we thought that the surrounding communities would still be interested. There are some trails back there that have developed over the years.”

The wooded area on the property contains seasonal ponds and vernal pools, the largest of which is referred to as Ogletown Pond. Vernal pools are temporary bodies of water, usually devoid of fish, that provide a safe breeding ground for amphibians and insects.

Having official walking trails would help protect the environment by keeping residents from forging their own paths through sensitive areas, as well as deter littering, illegal dumping and tent camps created by homeless populations, Townsend said.

With that in mind, the state allocated $500,000 for fiscal year 2019 to fund the development and maintenance of trails.

The trails, which were recommended to be 5 feet wide and made of crushed stone, would have nearly 20 access points.

Osienski said that after the money was allocated last year, he and Townsend began reaching out to the developer, Bob Sipple, and had a meeting with Delaware State Parks and Delaware Department of Natural Resources and Environment Control, which would maintain that portion of the land.

The group met and did a walk-through of the property together.

“We walked back in the trails. And it was just gorgeous back there. The way the light comes through the canopy, it really is gorgeous. But we wanted to show him kind of what we were thinking,” Townsend said.

To go through with the trails, a resubdivision plan would have to be filled out with the county land use department, explaining how and by whom the trails would be maintained, prior to the first lot being sold.

Ultimately, Sipple decided not to sign the easement due to the changes it required, according to emails obtained by the Newark Post. Sipple did not return a request for comment.

Osienski said that he was disappointed that Sipple decided not to move forward, but he and Townsend are holding out hope for trails.

“I think we want to try to keep it for these trails, and if that doesn’t work out, then I think we would have a conversation with the other parts of the Route 4 corridor about what kind of local investments might be helpful to people, ideally from an environmental and leisure perspective,” Townsend said.

---The project, however, remains stalled after the developer, Bob Sipple, decided against signing an easement that would make the wooded area open to the public.---- Bob Sipple ONLY CARES ABOUT PROFITS !!! Community service is not his focus nor priority nor interest.

The People that will be living there, probably don't want anyone back there. When People figure out They can live back there, how are The Cops going to chase Them out. What a Mess, thanks Delvelopers for not being Honest. Take a Picture of This Guy and show that. $$$