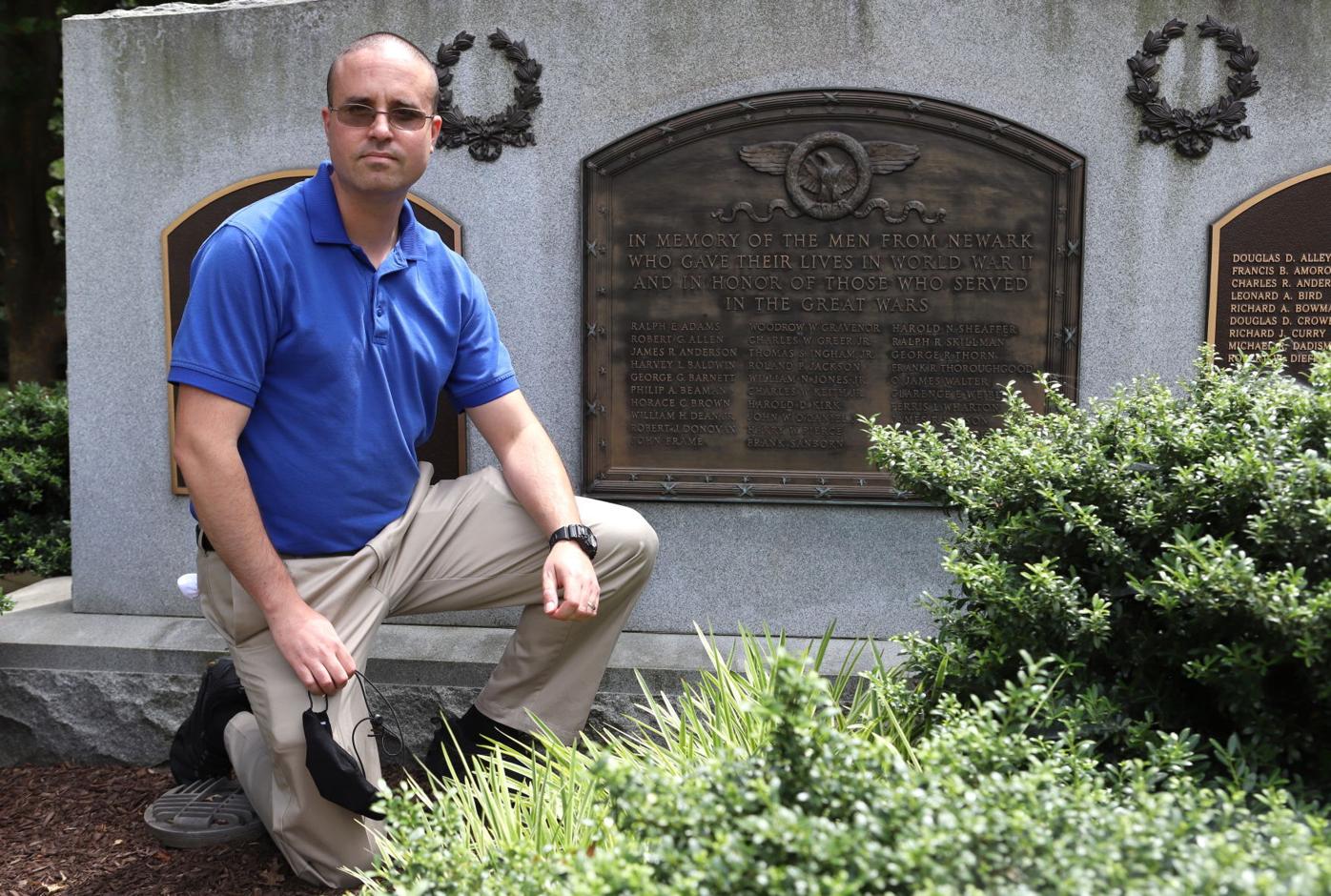 Lowell Silverman poses next to Newark’s war memorial on the Academy Lawn on Main Street. He is researching the 29 Newarkers who were killed in World War II. 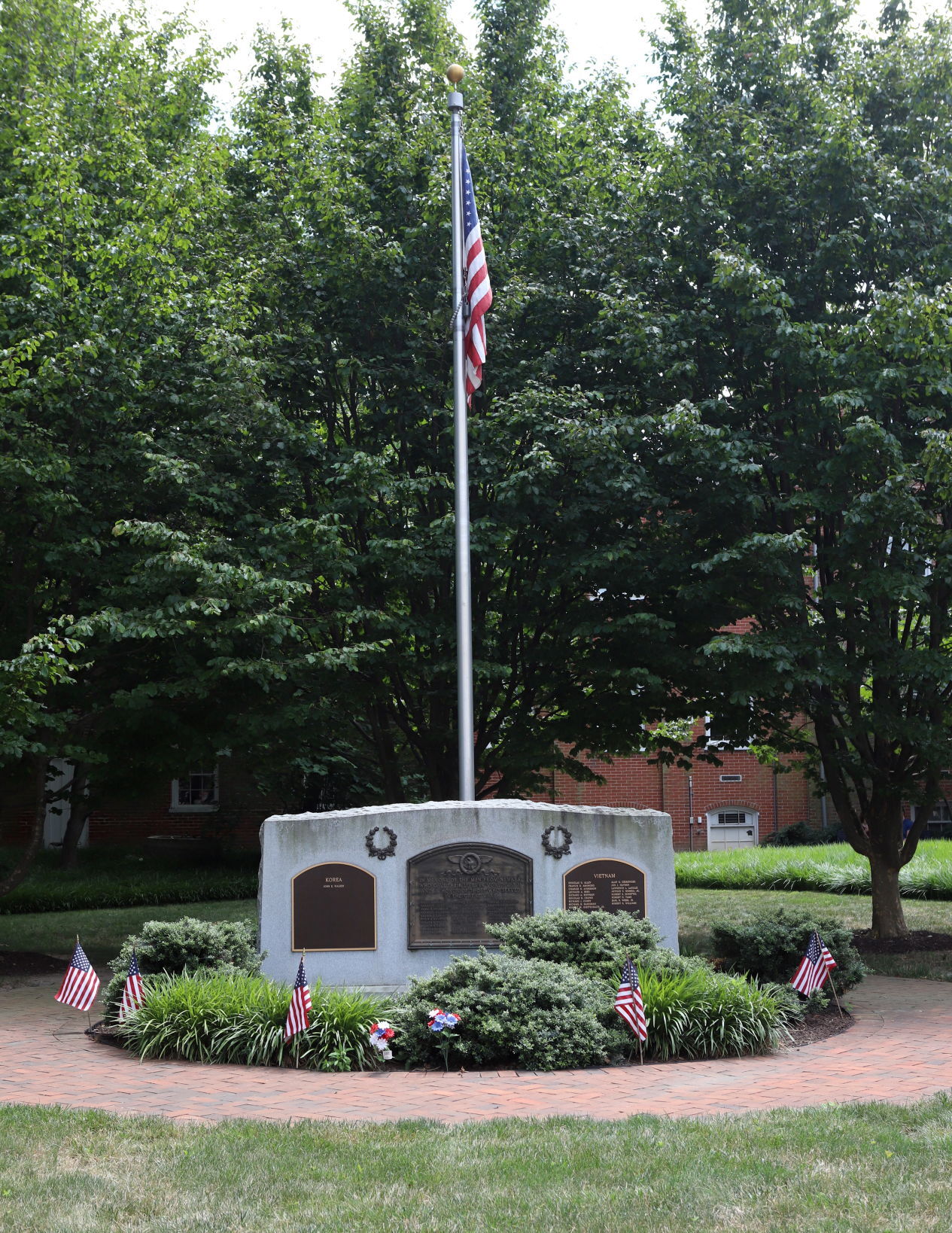 The war memorial on the Academy Lawn was built in 1949 as a way to honor Newarkers killed in World War II. In 1988, plaques were added to honor locals who were killed in the Korean and Vietnam wars.

Lowell Silverman poses next to Newark’s war memorial on the Academy Lawn on Main Street. He is researching the 29 Newarkers who were killed in World War II.

The war memorial on the Academy Lawn was built in 1949 as a way to honor Newarkers killed in World War II. In 1988, plaques were added to honor locals who were killed in the Korean and Vietnam wars.

For years, Lowell Silverman passed by the war memorial on Newark’s Academy Lawn and never gave a second thought to the names engraved on the monument.

That all changed earlier this year when he got involved with a national project that aims to compile biographies of all the Americans who died in World War II. Silverman began researching the Newark residents who died in the war and has already published articles on three of them, with two more coming soon.

Ultimately, he hopes to tell the stories of all 29 of the Newarkers who died in the war and are honored on the memorial, which was built in 1949.

“I walked by that memorial hundreds, thousands of times maybe, without paying it any attention,” Silverman said. “I hope if the stories get out there, that as people pass by, they’ll look and say, oh I recognize that name and here’s how he died.”

Silverman, 36, grew up in Maryland and moved to Newark to attend the University of Delaware, where he majored in history.

Though he didn’t pursue history professionally – he works as a 911 dispatcher – he said he has always considered historical research a hobby. In 2007, he contributed two articles to “Histories of Newark,” the book published in honor of the city’s 250th anniversary.

He has been fascinated by WWII history since he was a kid but first started in-depth research into it two years ago when he began compiling information on his grandfather’s unit, the 32nd Station Hospital, which operated in Algeria and Italy. The late Dr. Robert Silverman served 33 months overseas as a dentist.

“The project was a way of meeting him,” Silverman said. “He died six years before I was born.”

He started with the simple goal of digitizing his grandfather’s old scrapbook, but as he learned more about the unit and its members, he published an entire website, 32ndstationhospital.com.

What hooked him on doing the research was connecting with the family of a man his grandfather served with and providing them with information from his grandfather’s collection.

“It turns out I have two minutes of color 8-millimeter footage from this man’s wedding in Algeria to a French woman. Obviously, they had never seen this footage before. In return, I got a photo of my grandfather I’d never seen before,” he said.

It was through that project that Silverman learned of The Stories Behind the Stars project, which was founded in 2016 by Utah resident Don Milne. Assisted by volunteers from across the country, Milne’s goal is to publish the stories of all of the more than 400,000 Americans killed in WWII.

Silverman signed on to research the Newarkers and, with extra free time on his hands due to the coronavirus shutdown, began his work in June.

He uses resources like old newspapers, Ancestry.com, the Newark History Museum and the Delaware Public Archives to find his research. He also tries to contact family members, though more than 75 years after WWII, that can be tricky, he said.

“I always wish I’d started 10 years sooner, but today is better than tomorrow,” he said.

Learning about the fallen service members’ stories has been a moving experience, he said, and he’s been struck by the seeming randomness of how many of them died.

Second Lt. Robert Gage Allen was killed immediately after parachuting into the Philippines when he got stuck in a tree and was an easy target for Japanese snipers. Private George G. Barnett survived an initial injury but was killed three days later on Christmas Eve when the military hospital he was recuperating in was bombed. Second Lt. Harold N. Sheaffer was in the bomb bay of a B-17 without a parachute, trying to free a stuck bomb, when the plane was hit.

“These stories of sacrifice can almost drive you crazy, just the sadness and trauma,” Silverman said. “If it weren’t for events far beyond their control, these men would have been growing up and possibly done great things, and had families of their own. In many cases, they were killed too young to even have that.”

The project puts things in perspective, he said.

“You often find yourself imagining them in frankly an unimaginable situation,” Silverman said. “As tough as things are for all of us during the pandemic, being present in a global war is about a million times worse.”

Silverman’s articles are published at Fold3.com, a military records site that is affiliated with Ancestry.com. He plans to have all 29 profiles done in about a year and is considering publishing them in a booklet as well.

Ultimately, he would like to team up with other people to publish a book on all 579 of the Delawareans killed in the war.

“These people sacrificed their lives for their country. They deserve not to be committed to history just as a name on a plaque,” he said.

Silverman’s articles can be accessed at https://www.fold3.com/page/653606401-lowell-silvermans-tributes-to-world-war-ii-fallen or at https://www.facebook.com/DelawareWWIIFallen.

The war memorial honors the following 29 Newarkers who were killed in World War II. Anyone who has information about their lives is urged to contact Lowell Silverman at delawarewwiifallen@gmail.com.