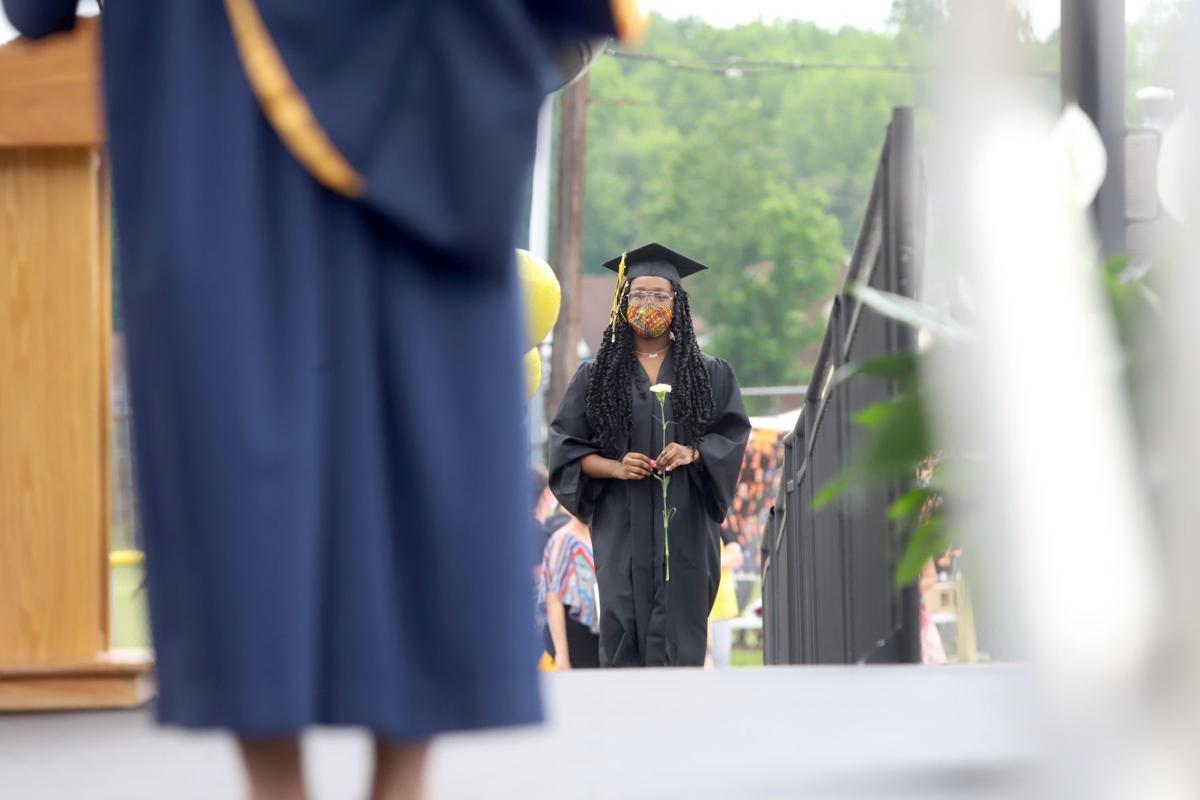 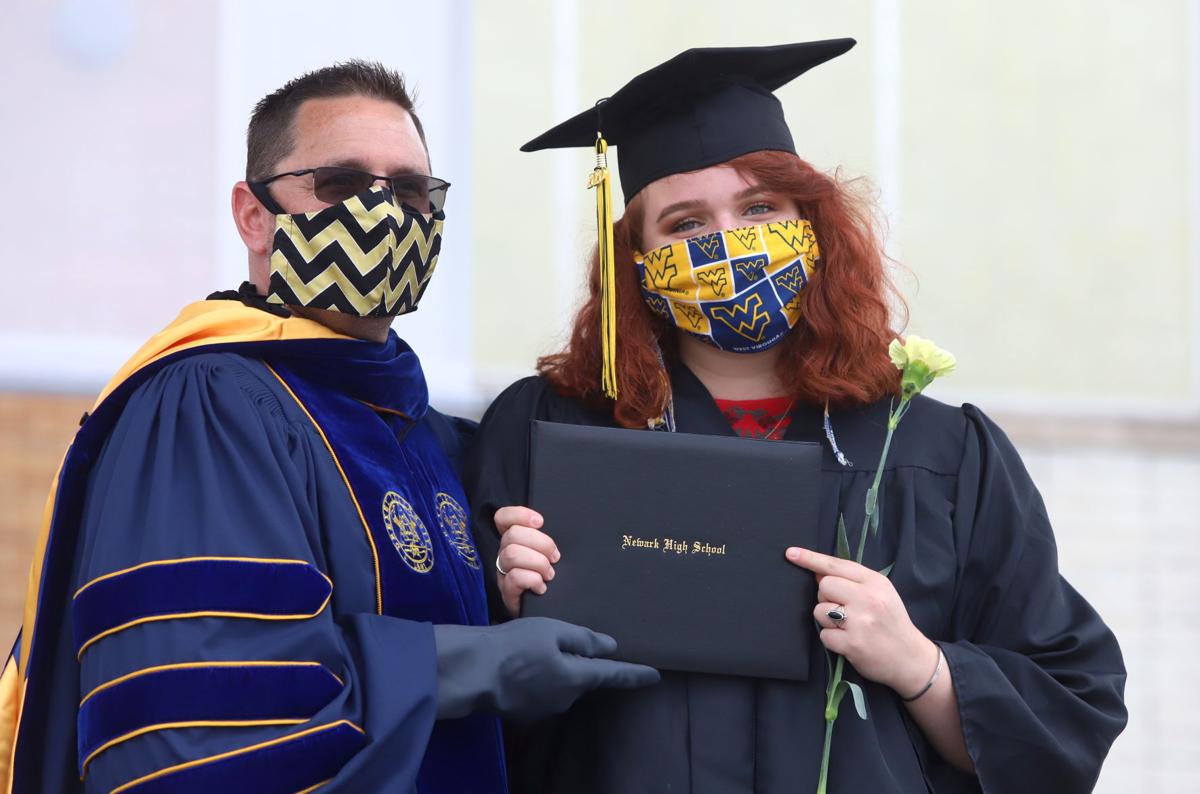 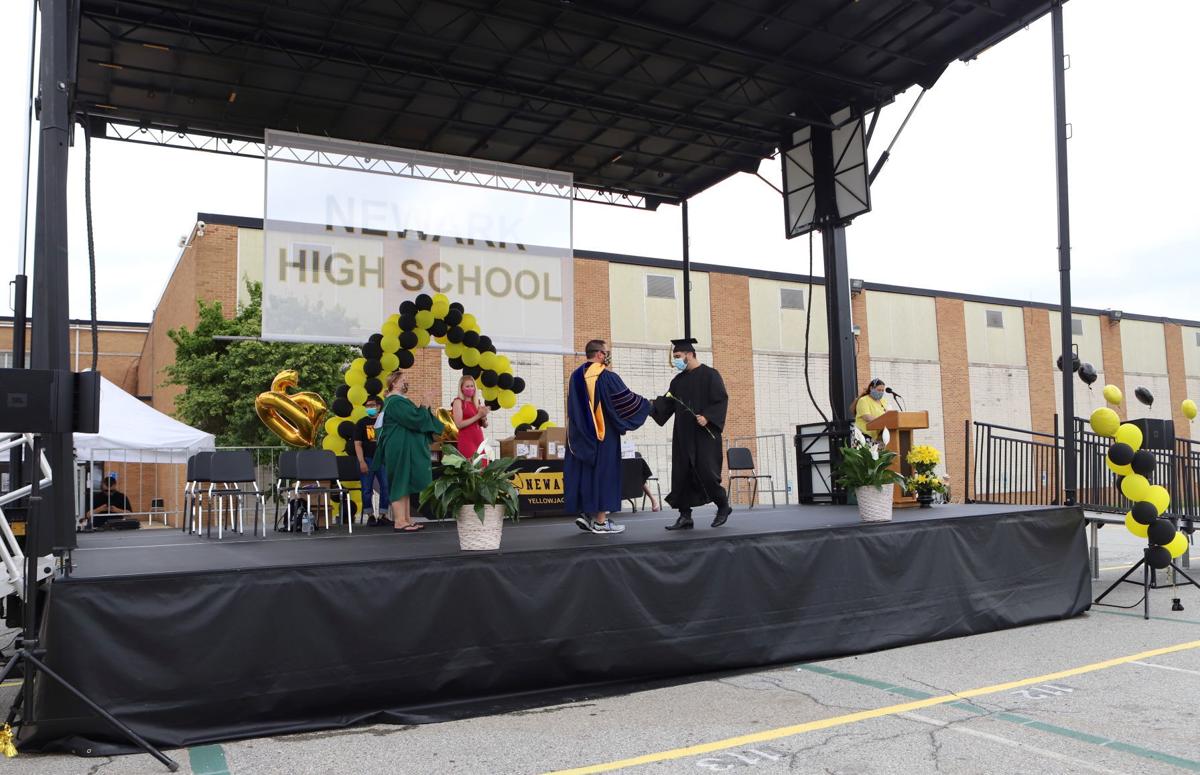 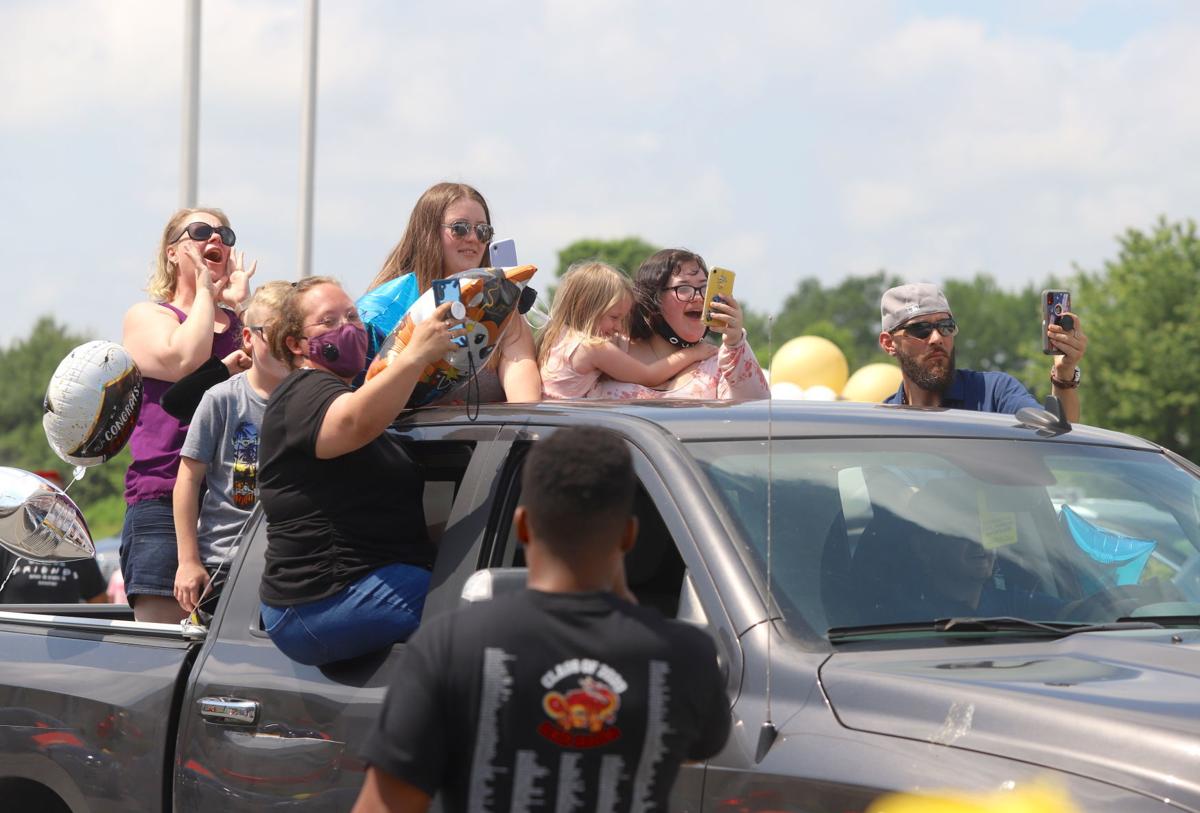 Glasgow High graduate Joshua Gatrell had a large contingent of family members cheering him on as he received his diploma. 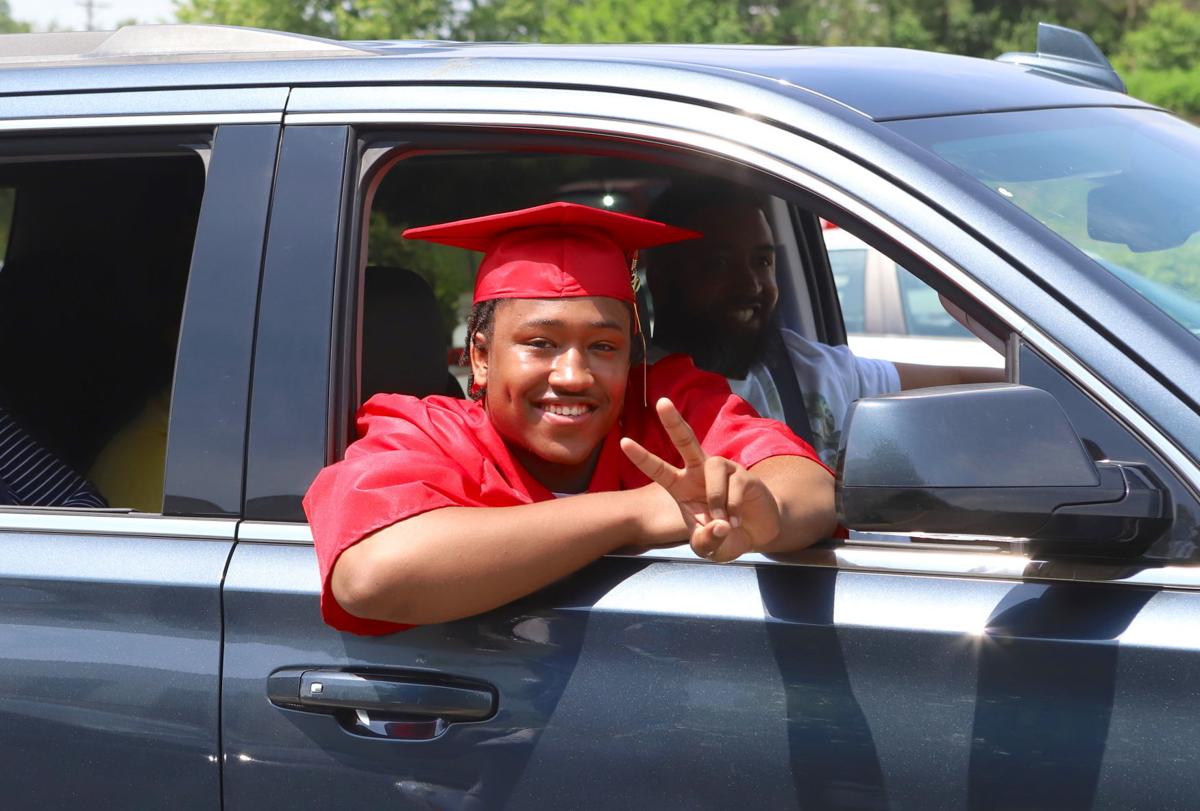 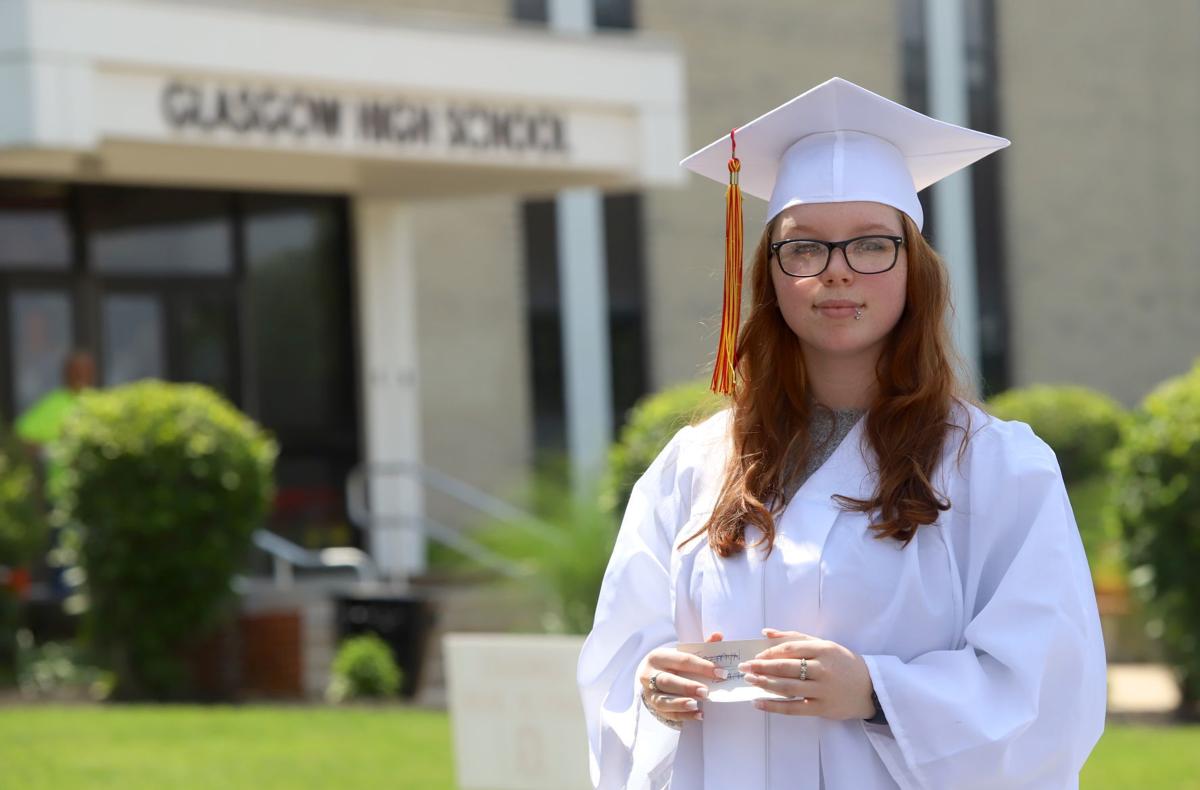 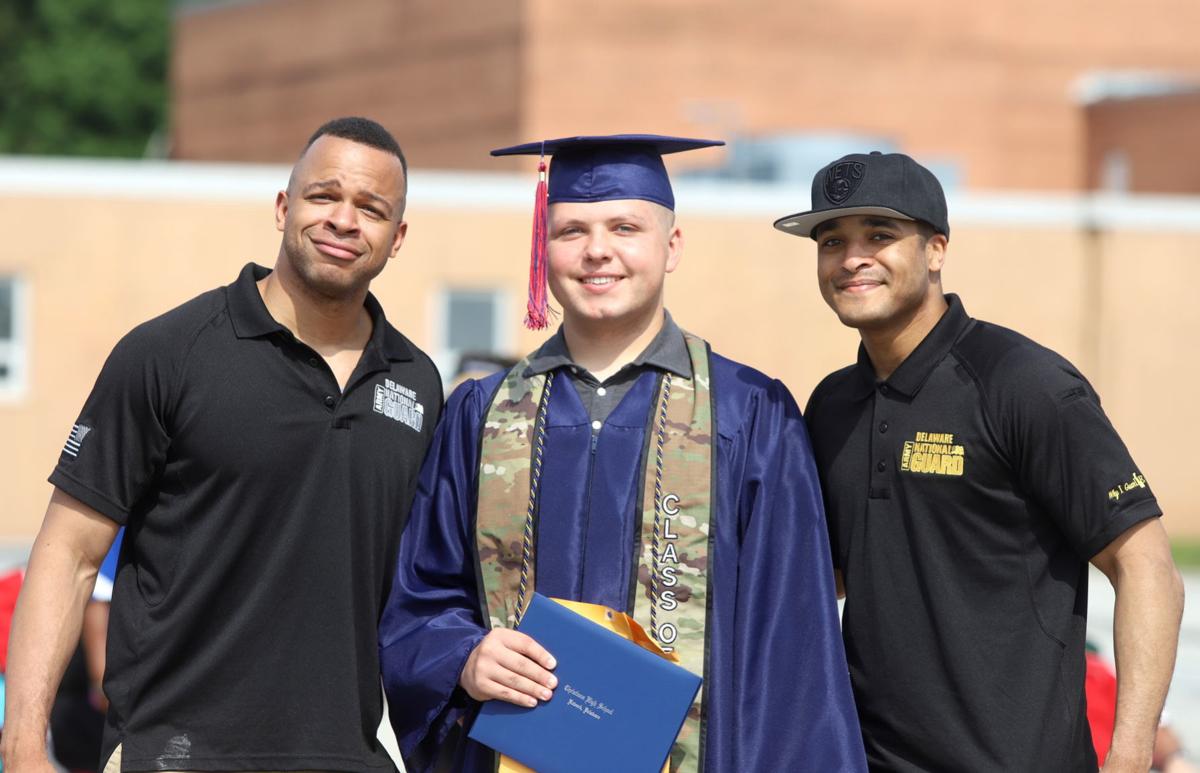 Christiana High graduate Jacob Barber, who is heading to the National Guard, poses with his military recruiters. 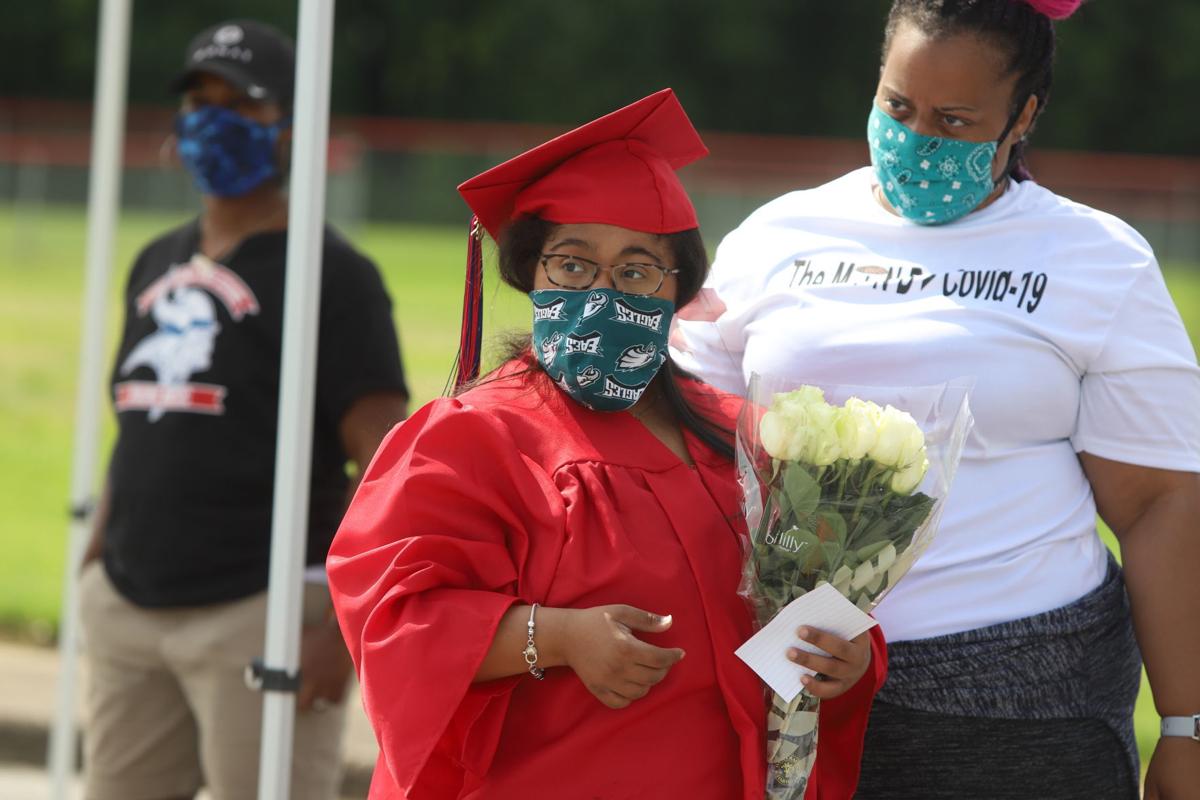 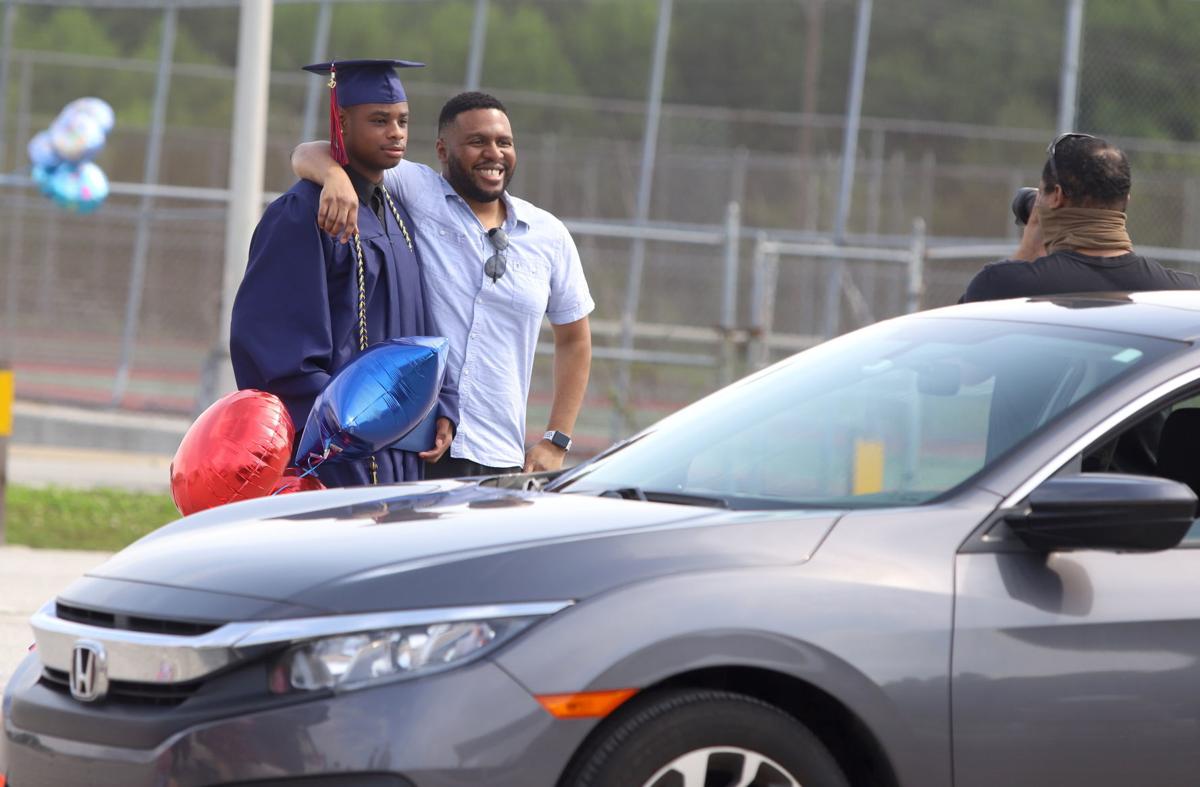 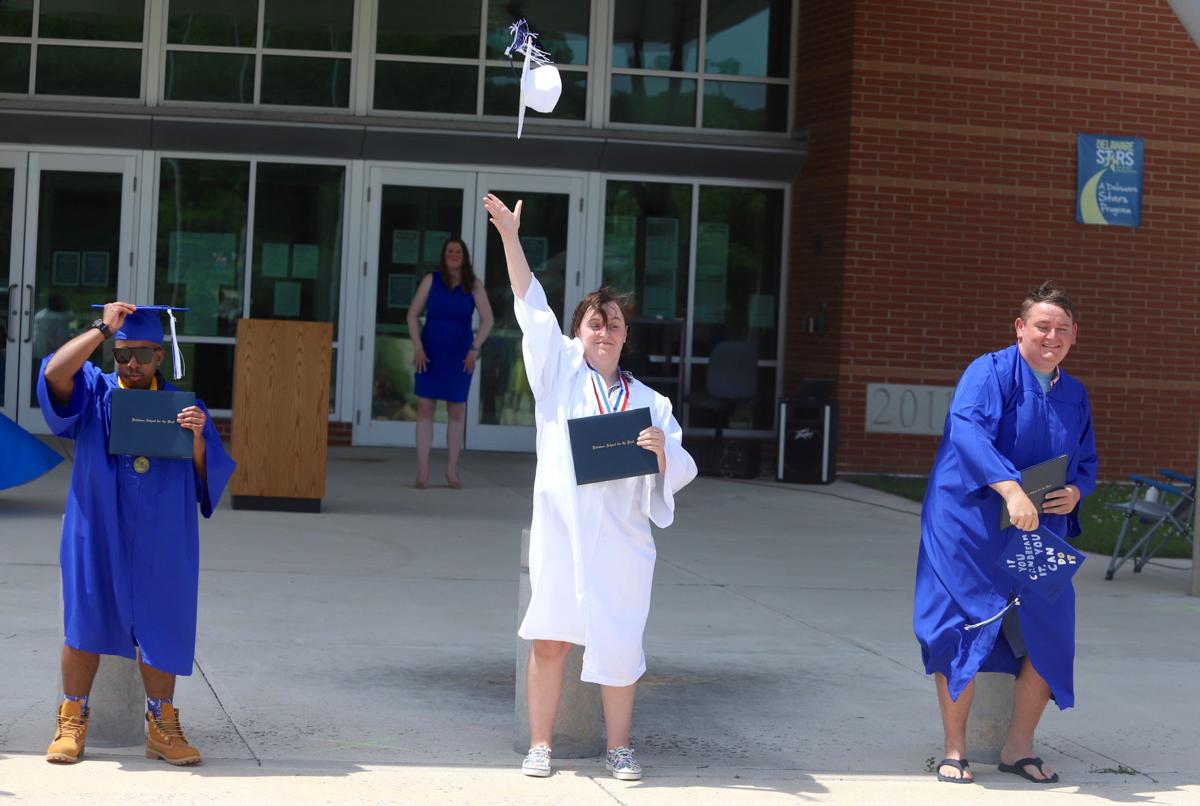 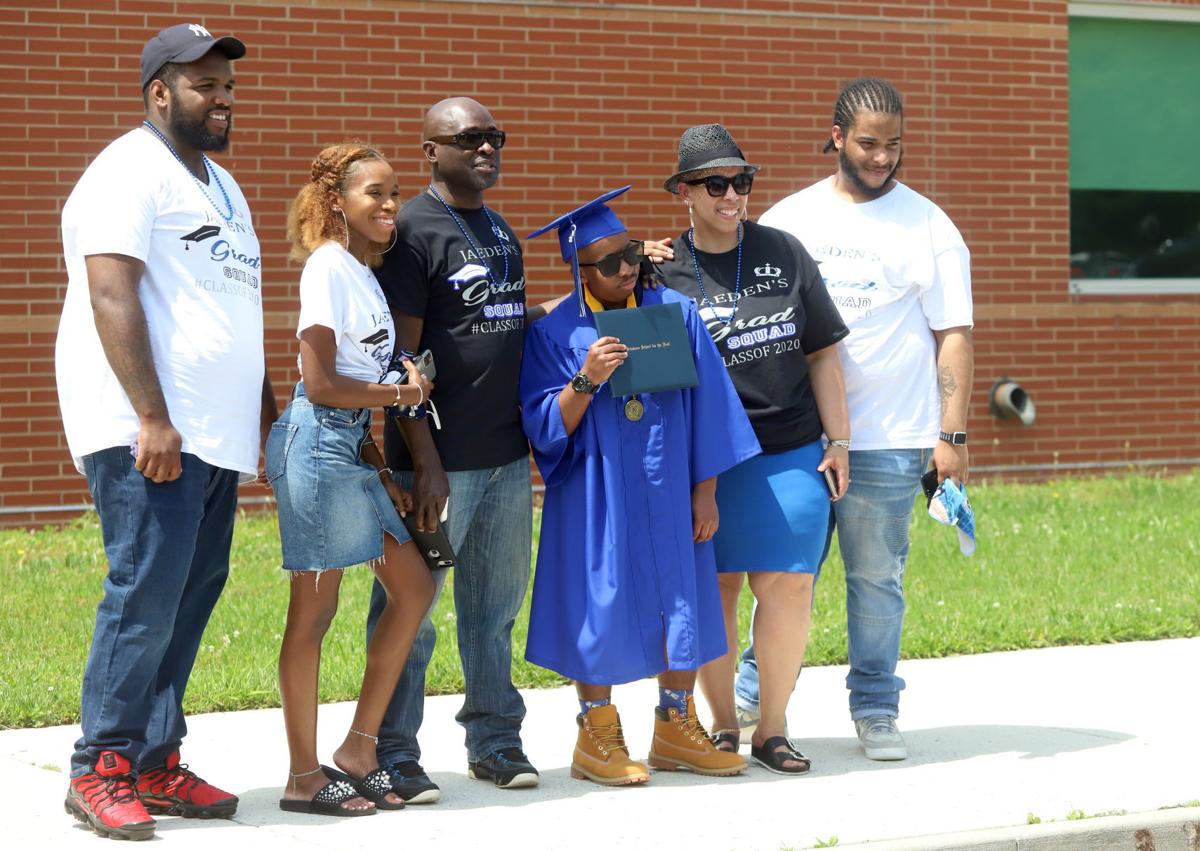 Delaware School for the Deaf graduate Jaeden Murray poses for a photo. 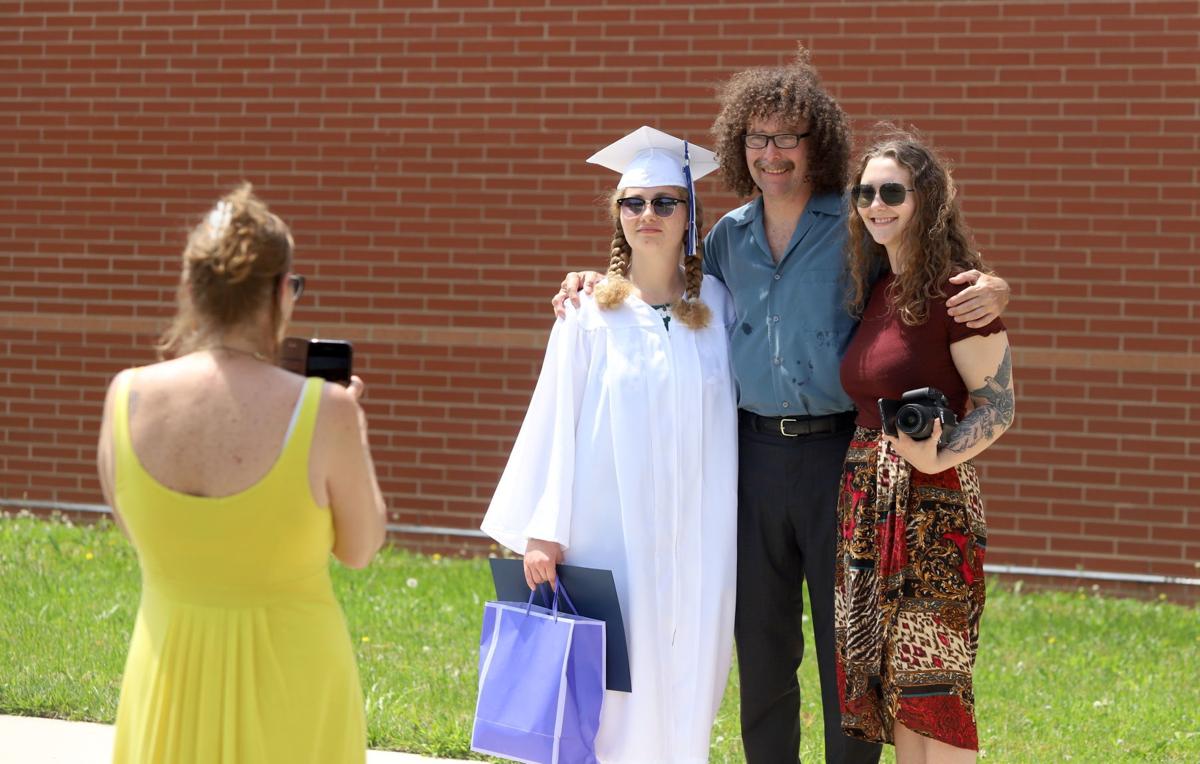 Delaware School for the Deaf graduate Emily Caseiro poses for a photo.

Glasgow High graduate Joshua Gatrell had a large contingent of family members cheering him on as he received his diploma.

Christiana High graduate Jacob Barber, who is heading to the National Guard, poses with his military recruiters.

Delaware School for the Deaf graduate Jaeden Murray poses for a photo.

Delaware School for the Deaf graduate Emily Caseiro poses for a photo.

With music blaring, a DJ hyped up the graduates lining up to get their diploma in the parking lot of Glasgow High School. On stage, administrators danced, and many of the students followed suit as they crossed the stage. From their cars, parents and family members cheered, waved streamers and leaned out the window to take photos.

The party-like atmosphere was a far cry from the usual graduation ceremony at the Bob Carpenter Center, and for students like Joshua Gatrell, that was just fine.

“This is actually better than the Bob. Who else is going to have this?” Gatrell said, referring to the Class of 2020’s unique place in history as the first group of students – and hopefully the last – to graduate during a global pandemic.

Gatrell, who has a job lined up at Amazon and aspirations of joining the National Guard, came with a large cheering section. Twelve family members packed into a pickup truck, many standing in the bed of the truck to yell and cheer as he collected his diploma.

Glasgow and the two other Christina School District high schools each held drive-thru graduation ceremonies on Friday. The schools planned the events as it became clear that holding a large, group ceremony would not be possible due to the risk of spreading coronavirus.

Each one was designed differently – Newark’s and Christiana’s were more muted than Glasgow’s – but they all followed the same concept. Over the span of several hours, each graduate was assigned a time to arrive to collect his or her diploma. As each family pulled into the school’s parking lot, the graduate got out and walked across the stage as family members were able to take photos.

In the lead up to the graduations, Christina took heat from some parents who called for the district to postpone graduation or hold a more traditional ceremony outdoors in the football stadium. However, Newark High Principal Aaron Selekman said the drive-thru ceremony was a success.

“It’s been phenomenal,” Selekman said. “I think they feel like they got their different, special day.”

Wearing a mask and gloves, Selekman spent seven hours on stage with no break, handing each graduate a diploma and taking a few moments to have a conversation with each of the students as they crossed the stage.

“We’ve paced it out so each family has as much time as they want,” he said.

For most students, Friday marked the first time they had seen their teachers and principal since school closed in mid-March.

“It’s a shame we couldn’t be with all our friends and have an official ceremony, but it still feels like we made it,” Newark High graduate Mariel Hazelwood said.

Still, Hazelwood – who crossed the stage wearing a face mask adorned with the logo of West Virginia University, where she plans to study musical theater – said she appreciated the school’s effort to make graduation special.

“They did the best they could with what they were given,” she said.

Earlier in the week, each school held a virtual graduation ceremony that included a slideshow featuring the senior portraits of each graduate along with many of the traditional trappings of a graduation, such as valedictorian speeches and a message from the principal. The videos were filmed in advance and streamed online.

“This pandemic has taken enough away from us already. Do not let it take away our pride, excitement and achievement, as well,” Christiana valedictorian Kate Dawson said. “Tonight is still our night to shine.”

“Glasgow High School is a family as well. You all grew up together, strived and succeeded together. I know right now the pain is immense, but his memory will always have a place in your hearts,” Biden said. “As you go out into the world and begin the next phase of your lives, take that memory, take everything you've learned, and use it to find your purpose, because you're going to need to find that purpose, because we need you. I can't wait to see what you'll accomplish.”

Delaware School for the Deaf’s ceremony, meanwhile, most resembled a traditional graduation. With only six students in the graduating class, the school conducted a brief ceremony in front of the building as family members watched from lawn chairs.

“I was nervous at first, then got excited,” graduate Nishma Reyes said of anticipating graduation. “I’m proud of myself for graduating.”

Valedictorian Megan Hopkins, who has attended DSD since preschool, concurred.

“It feels nice all my hard work paid off, and I’m proud I proved everyone wrong that I am able to do this,” said Hopkins, who is heading to Gallaudet University to study to be a school counselor.

Jaeden Murray had a big cheering section of family members on hand to watch him graduate.

“It would have been four times bigger, if not for corona,” his mom, Evelyn, said.

Murray, who lost his hearing due to a brain tumor at age 5, plans to return to DSD to work as a paraprofessional next year while pursuing his teaching degree. He hopes to ultimately work at DSD as a teacher.

“He’s been through a lot,” Evelyn Murray said as she watched Jaeden graduate. “This was a long time coming.”