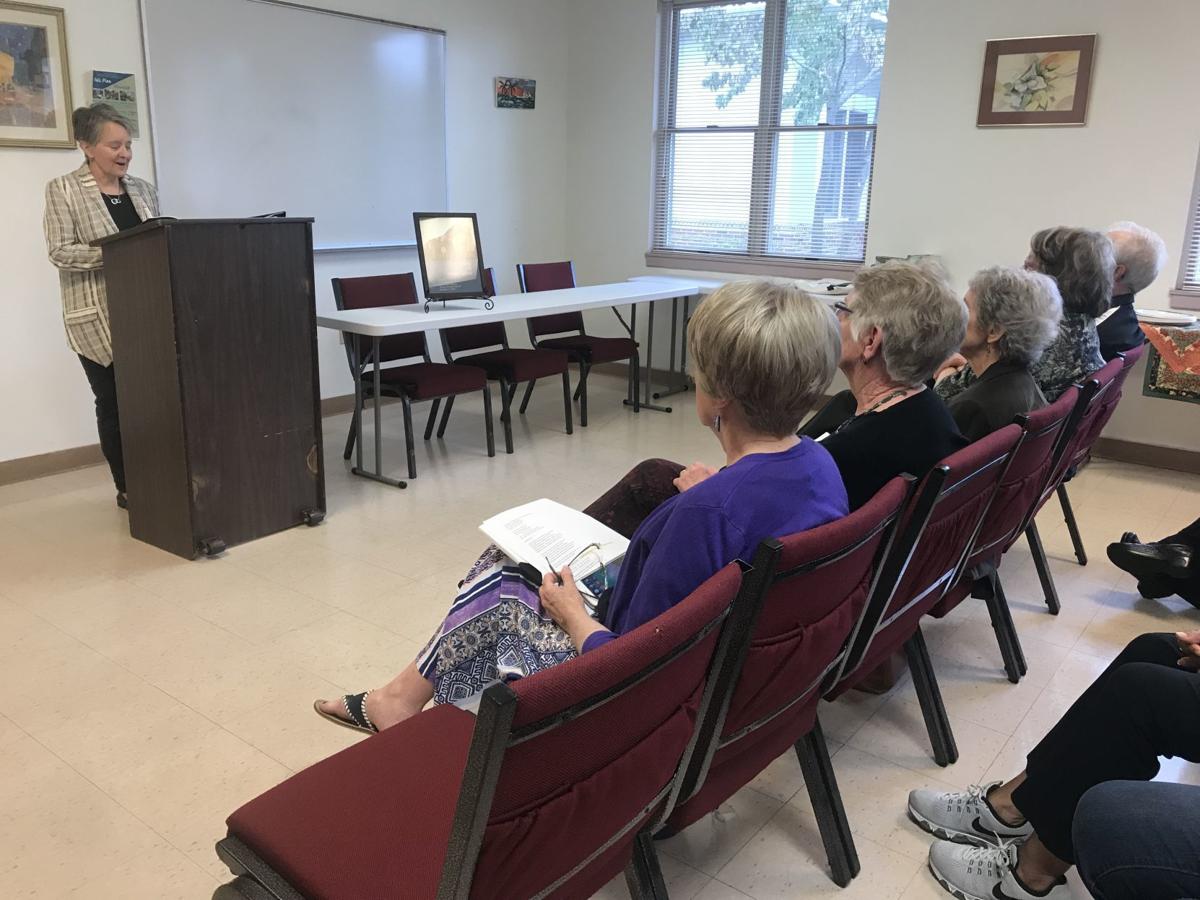 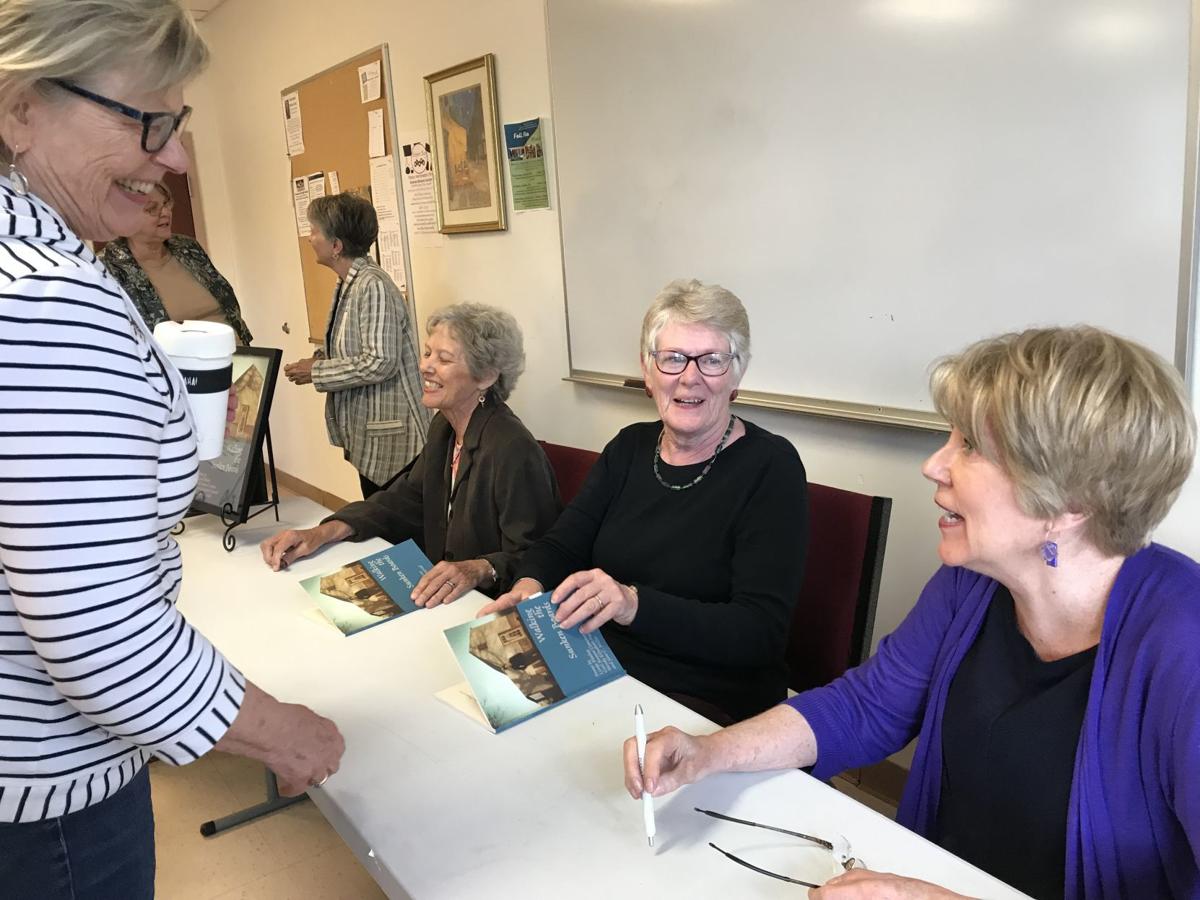 Four award-winning Delaware poets read from their first collaborative book last week at the Newark Senior Center, extolling the virtues of friendship, longevity, time alone in nature and the immortality of the written word.

Linda Blaskey, Gail Braune Comorat, Wendy Elizabeth Ingersoll and Jane C. Miller are the collective co-authors of “Walking the Sunken Boards,” a collection of poems written or edited at Ingersoll’s family farmland along the Chester River in Maryland.

The simple farmhouse, which they call “the muse,” graces the cover in a 1944 picture and conveys a sense of place that threads throughout the compilation. A lone woman, Ingersoll’s mother Betsy, stands in the middle of the frame, striking a confident pose in pants and a hair kerchief.

They bring poems, critique each other’s works and write new ones. During the reading, each woman shared a few poems from their previous books and some from the new tome.

Ingersoll’s parents built the farmhouse more than half a century ago at Shipping Creek Farm, their property on the Chester River on the Eastern Shore of Maryland.

“The house has been expanded since then,” said Ingersoll, showcasing an aerial view of the property. In view are the river’s cove, meadows, an orchard, the farmhouse and a creek.

“The house is what holds us to look out and look in,” she said. “We walk and we are inspired.”

After 10 years of working together and meeting at the Eastern Shore home, “Walking the Sunken Boards” has emerged. The four poets have readings scheduled in both Maryland and Delaware to share the fruits of their years of love and labor.

At the Newark Senior Center last Monday, the four women regaled more than a dozen fans, friends and poetry lovers with tales of their process and poems from their books.

Many of the poems, all crisp with their wordsmithing, were about husbands aging or long gone. Others were about mothers, the passage of time and the space between — that is, the quiet, more mundane moments of life.

Listeners were enrapt with melodic meter and disparate line ends — with slivers of light orienting you to a room, falling toothbrushes as a symbol of youth passed and cheeky phrases about the mating habits of rare birds falling on the deaf ears of a baseball fan.

The mood in the nondescript classroom flowed with the poetry and the women delivering their work. At times, the room was filled with laughter. Other moments, there was intentional silence for a beat. The four women masterfully shared their work, which rang both light and grim.

“It is amazing that, when putting this book together, without consulting each other, we ended up with a lot of the same images,” said Blaskey after reading a poem about a moon-shaped scar. Another one of her co-poet’s works featured a similar phrase, but about a completely different subject.

There’s no denying the power of poetry, and of the quartet as a whole. Each writer is widely published and well-respected in the mid-Atlantic arts world on her own, but the dynamism of the group made for a uniquely intimate and lively event.

The reading was well-attended and open to the public, and was hosted in conjunction with the Newark Partnership.

Linda Blaskey’s work has appeared in numerous journals and anthologies including Best New Poets 2014. Her work was also chosen for the North Carolina Poetry on the Bus project and has been nominated for a Pushcart Prize, Best of the Net, and Bettering American Poetry. Her chapbook, “Farm,” was published by Bay Oak Publishers, and was a winner in the Delaware Press Association’s Communications Contest. She was a finalist for the Patricia Dobler Poetry Award, and a winner in Third Wednesday’s One Sentence Poem contest. She is the recipient of two fellowship grants from Delaware Division of Arts and is poetry/interview editor for The Broadkill Review and coordinator for the Dogfish Head Poetry Prize.

At the book signing after the event, Blaskey talked to readers about how to write a one sentence poem.

Gail Braune Comorat is a founding member of Rehoboth Beach Writers’ Guild (RBWG), and the author of “Phases of the Moon” from Finishing Line Press. A Pushcart nominee, she has twice received Delaware Division of the Arts fellowship grants for poetry. Her work has appeared in “Gargoyle,” “Grist,” “Mudfish,” “Philadelphia Stories,” “The Widows’ Handbook” and numerous anthologies. In 2012 she won the Artsmith Literary Award for her poem “Summer of Ladybugs.” She’s a long-time member of several writing groups in Lewes, where she teaches poetry and grief writing classes.

Wendy Elizabeth Ingersoll is a retired piano teacher whose publications include her book “Grace Only Follows,” which won the National Federation of Press Women Contest; two chapbooks; and poems in various journals, for which she’s twice received Pushcart Prize nominations. Other contests include first places in the John Milton Memorial Celebration of Poets and Poetry, the Delaware Literary Connection, and Rehoboth Beach Writers’ Guild, as well as finalist in the Dogfish Head Poetry Prize. She also enjoys serving as reader for “The Delmarva Review.”

Jane C. Miller’s poetry has appeared in the “Colorado Review,” “The American Journal of Poetry,” “Iron Horse Literary Review,” “Summerset Review,” “Mojave River Review” and elsewhere. Miller has been nominated for Best New Poets and Best of the Net. A finalist in the 2017 Red Wheelbarrow Poetry Contest and the 2018 Florence C. Coltman Award for Creative Writing, she has received a fellowship and honorable mention in poetry from the Delaware Division of the Arts.