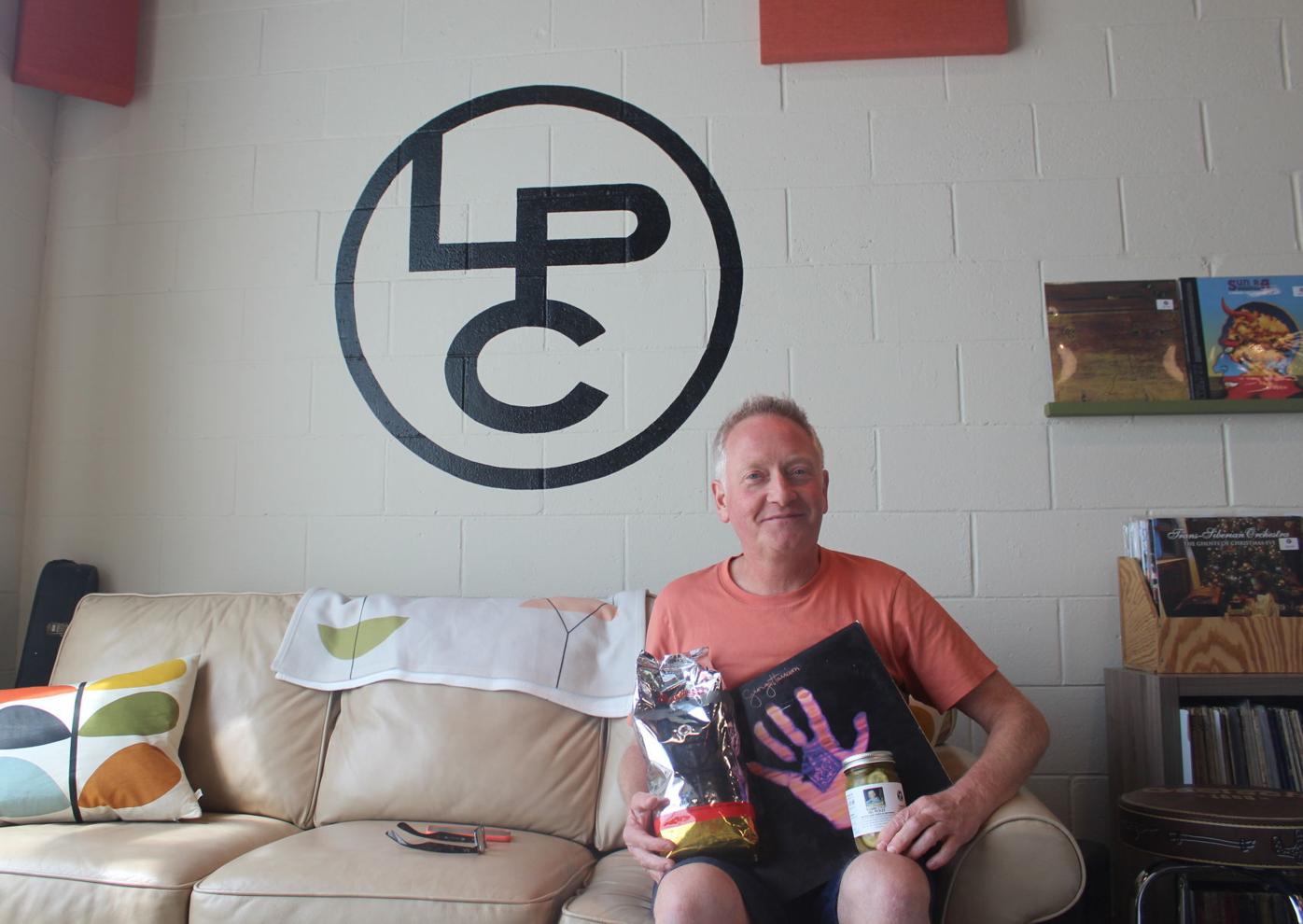 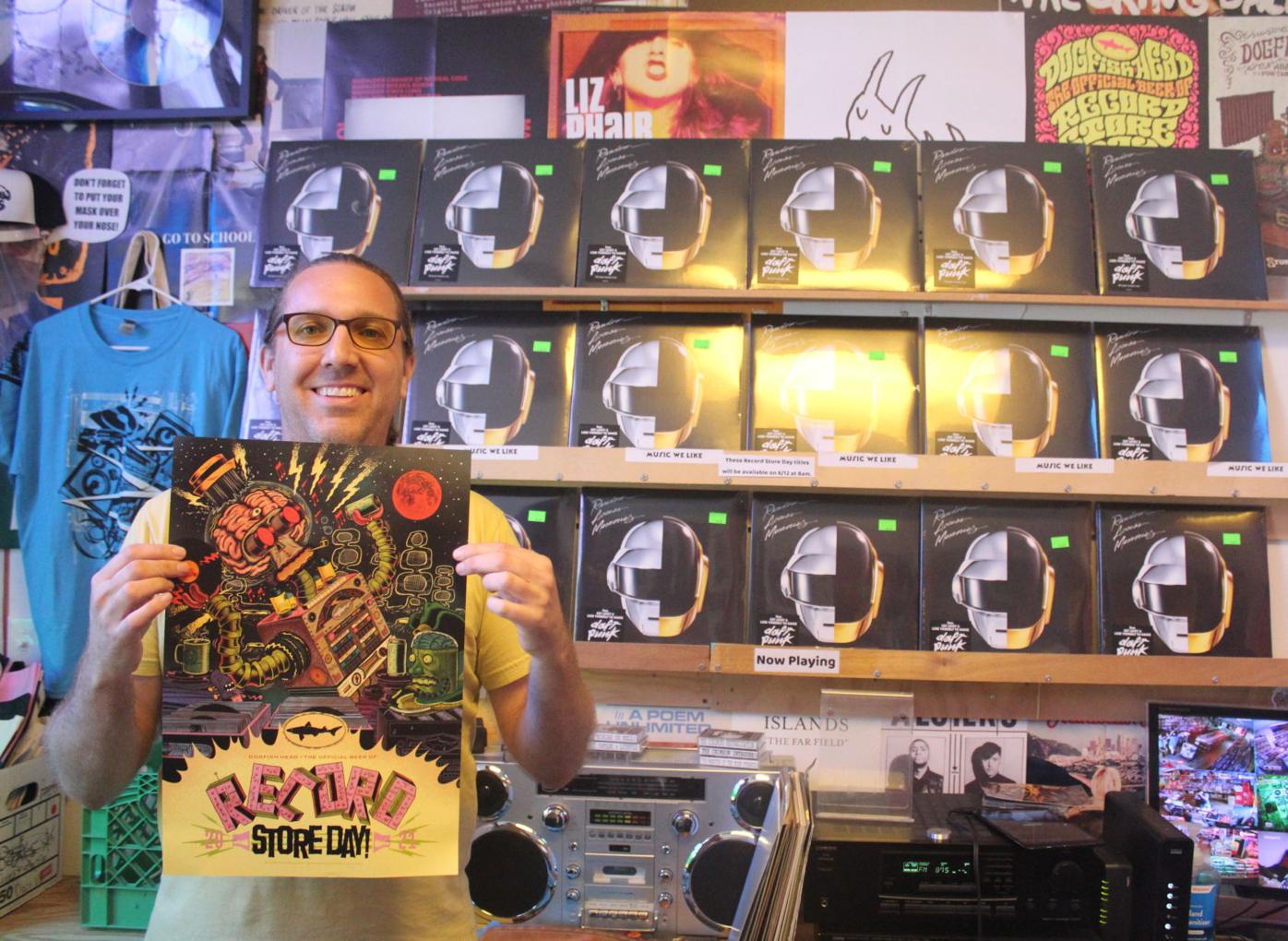 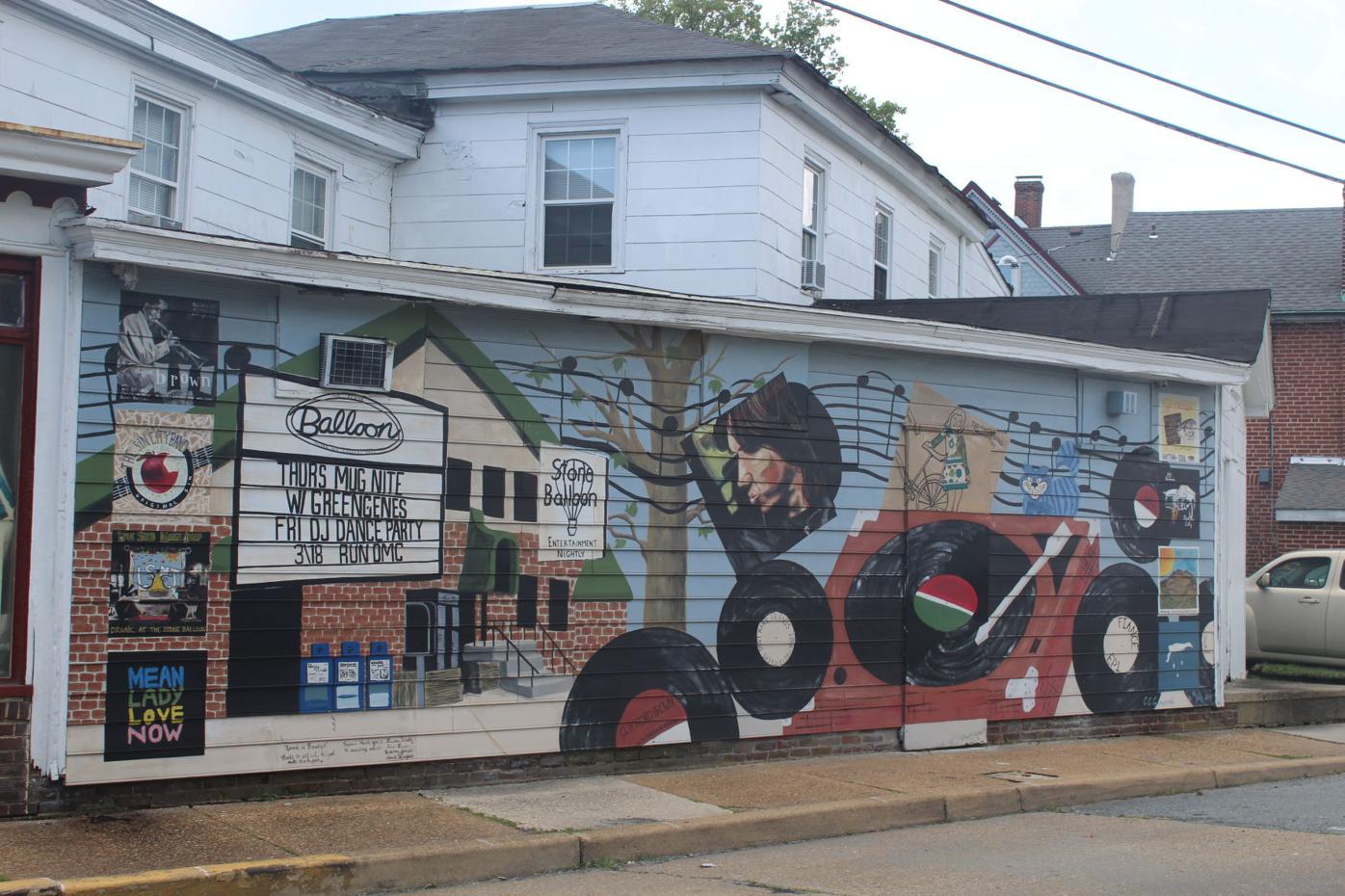 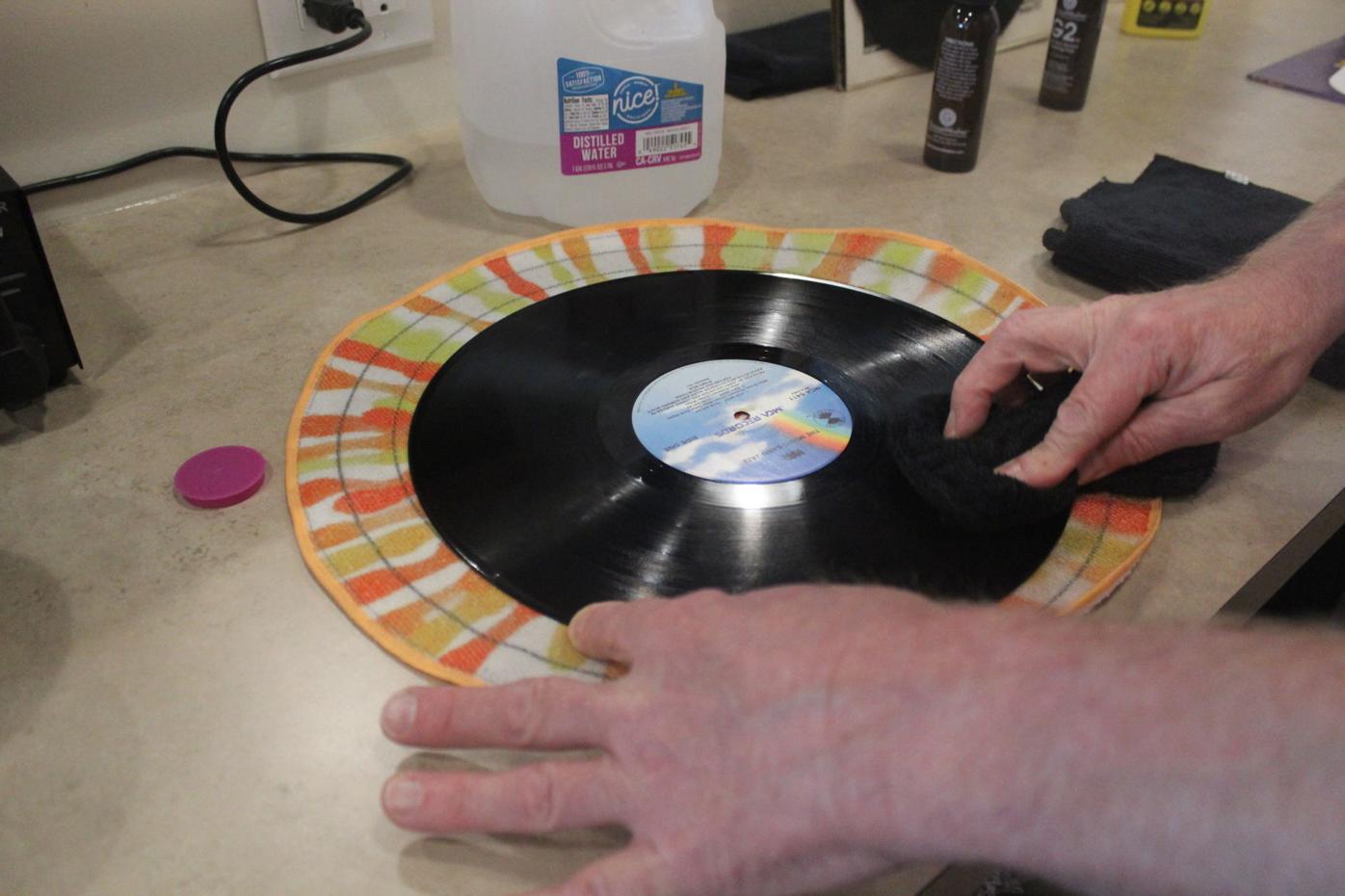 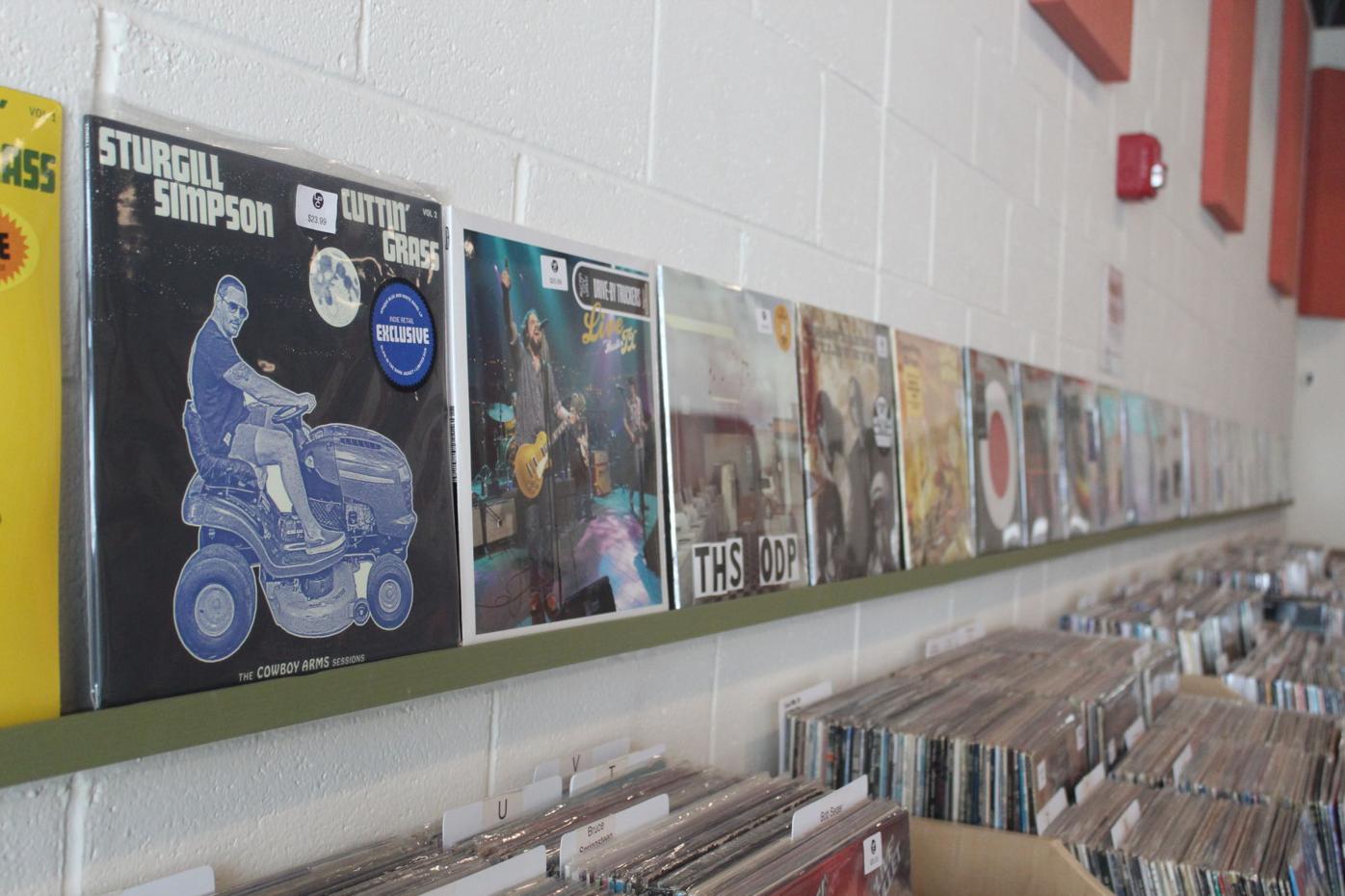 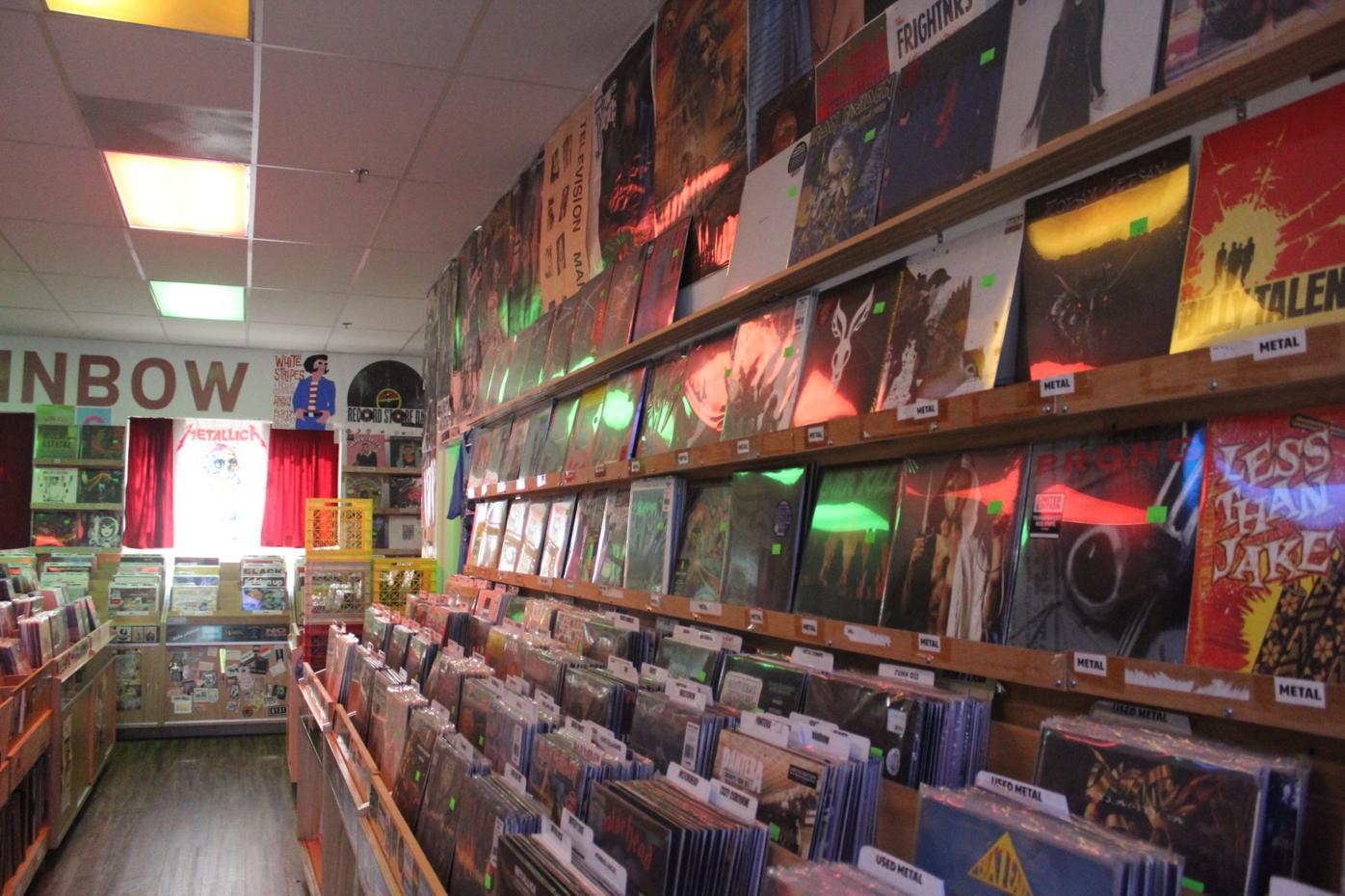 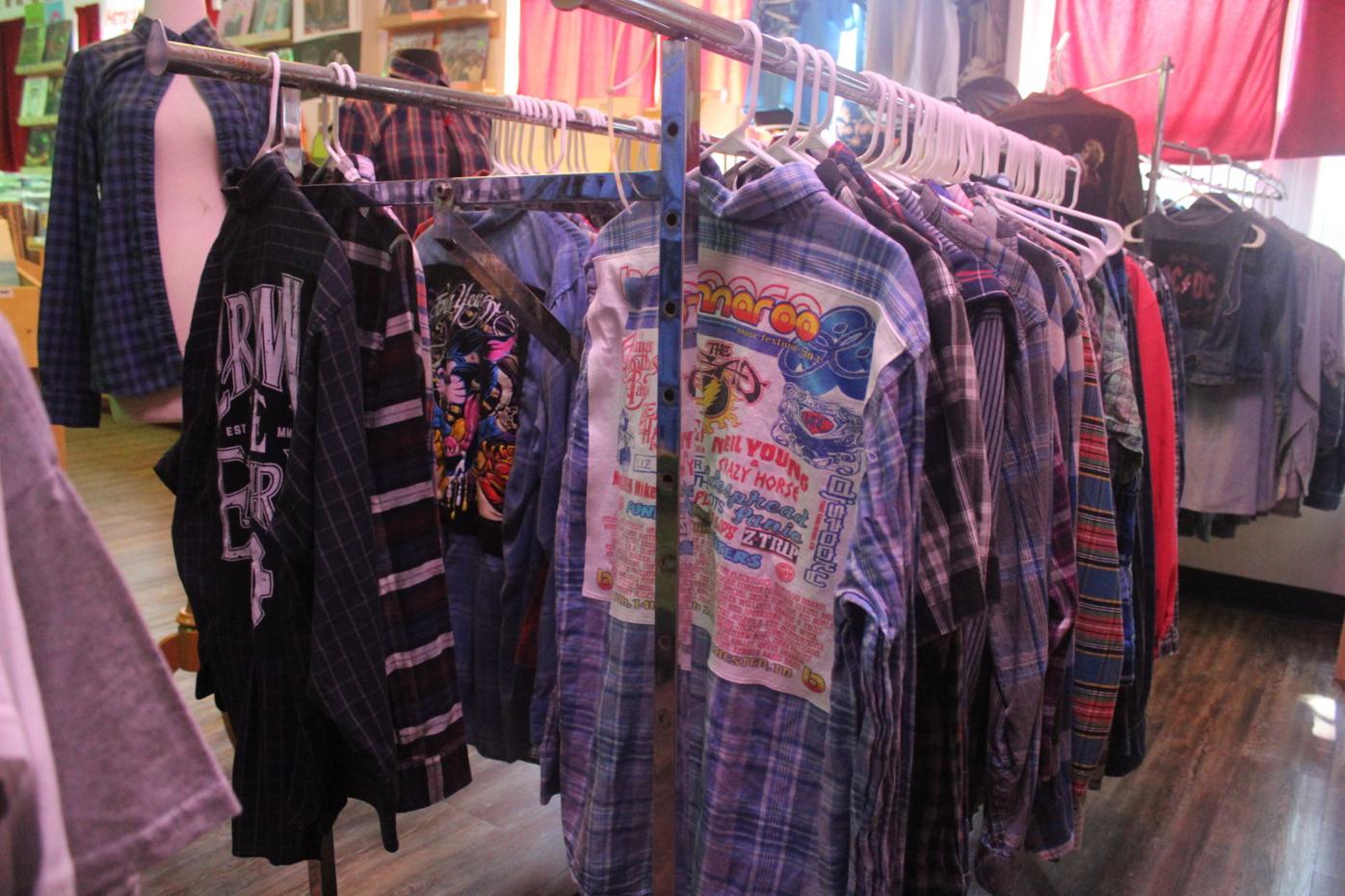 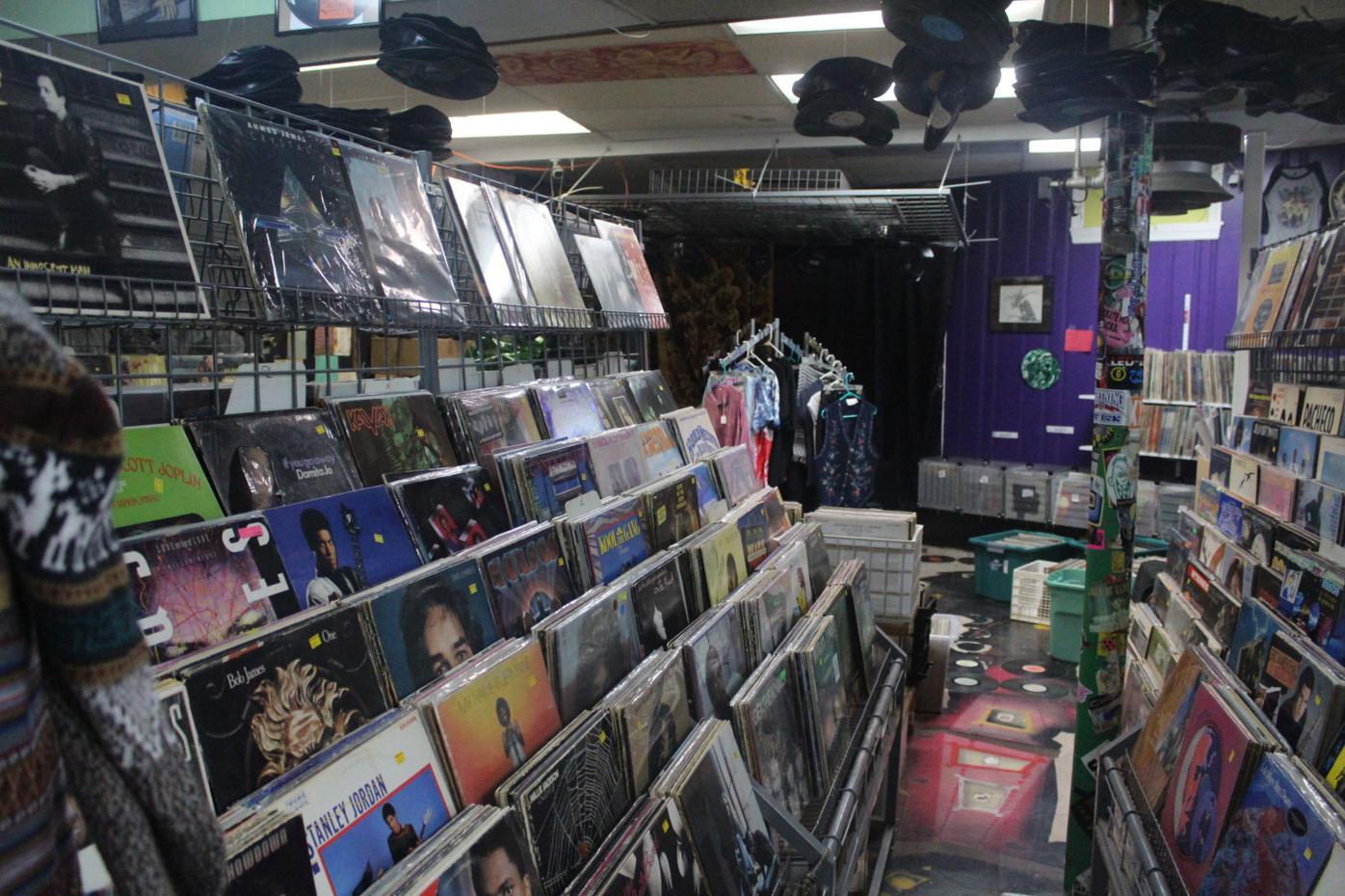 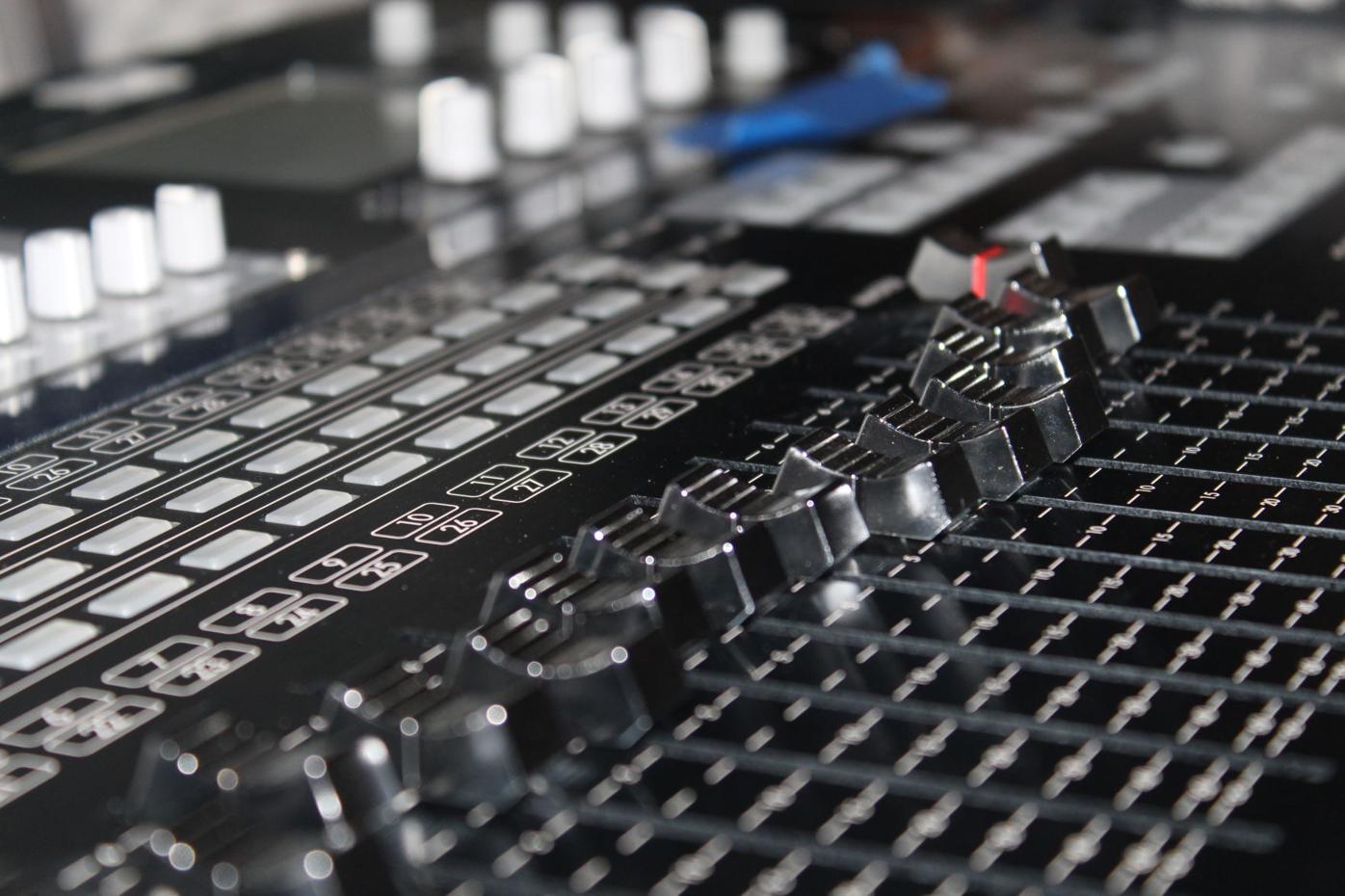 Wonderland Records is one of three Newark record stores celebrating Record Store Day on July 17. The store has its own recording studio for up and coming bands to record their music. 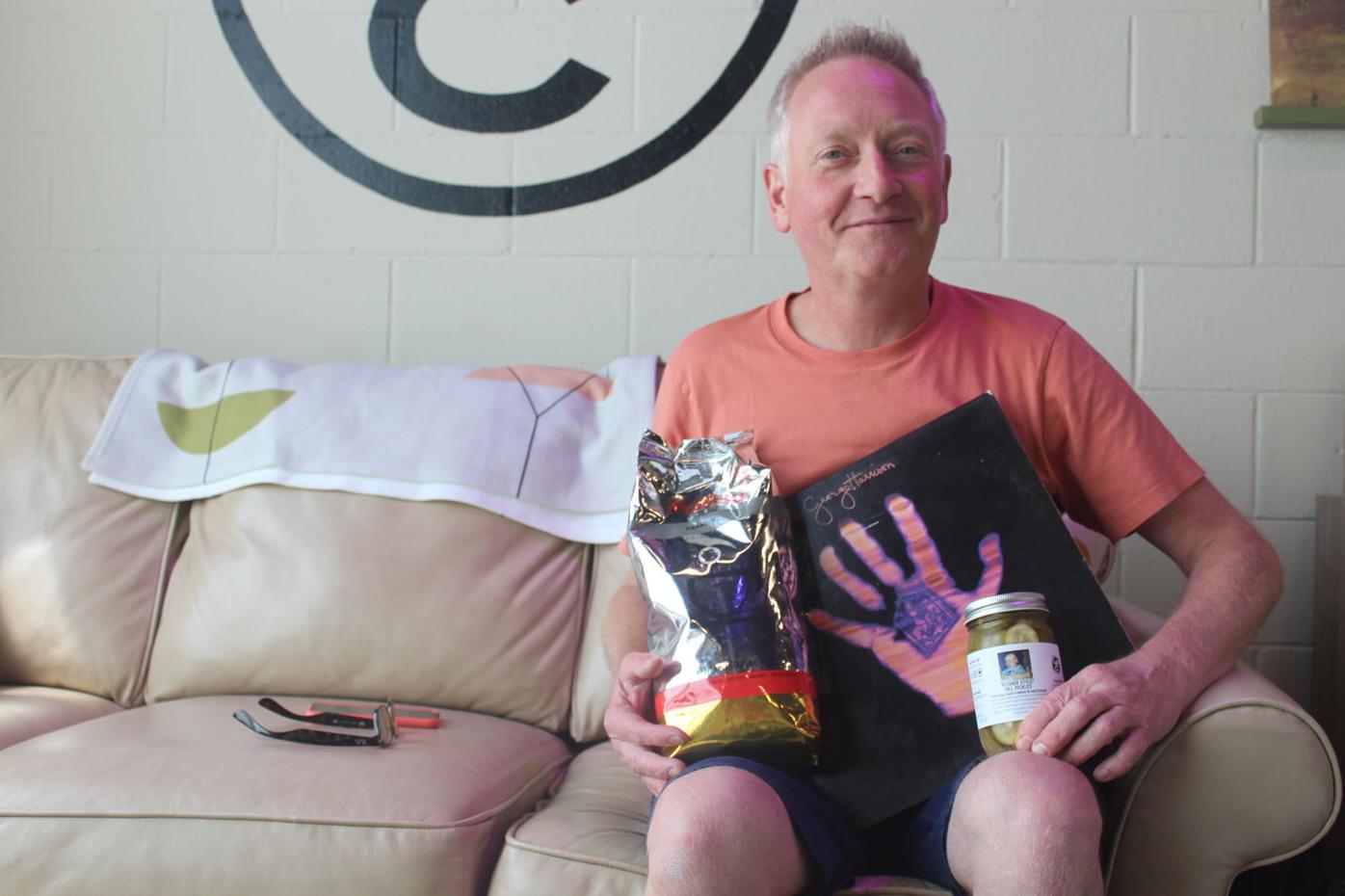 Long Play Cafe owner Brian Broad holding three elements of his business, coffee, records, and pickles. His store is one of three in Newark celebrating Record Store Day on July 17.

Wonderland Records is one of three Newark record stores celebrating Record Store Day on July 17. The store has its own recording studio for up and coming bands to record their music.

Long Play Cafe owner Brian Broad holding three elements of his business, coffee, records, and pickles. His store is one of three in Newark celebrating Record Store Day on July 17.

Newark has become a regional destination for record collectors, with three record stores, all near Main Street within a mile of each other, offering the perfect place for crate diggers to find a rare vinyl they’ve sought after.

Wonderland Records, Rainbow Records and Long Play Cafe will each be celebrating Record Store Day on Saturday differently showing their own unique niche. July 17 is the second Record Store Day this year, with the first being celebrated on June 12. Both drops feature new vinyl pressings and reissues.

“People will travel 100 miles to go to a town with three record stores,” said Demitri Theodoropoulos, owner of Wonderland Records.

The three stores offer different shopping experiences and selection. Long Play Cafe has coffee and some light food items and specializes in popular music. Rainbow has its own custom-made flannels designed by Melissa Forsythe and other shirts along with an expansive selection of rare and independent music. Wonderland provides a recording studio for up-and-coming bands, along with a smoke shop to accompany a selection focusing on jazz and R&B vinyl.

“We work together. It’s a small business, so you have to help each other to survive,” Rainbow Records co-owner Todd Brewer said. “Our competition is Amazon, Target and Walmart.”

The three Newark stores work together referring customers to each others’ stores if a customer asks for something they know the other store specializes in.

“I thank the universe every day that there are three record stores in Newark because everybody benefits,” Theodoropoulos said.

Brewer is expecting a line outside the door when Rainbow opens at 8 a.m. on Saturday. He will feature around 150 new releases from Record Store Day on the wall of his store. Notable releases include “CHAMPIONS” a collection of outtakes from Jazz trumpeter Miles Davis’s “Jack Johnson” sessions, a 1972 live album in Philadelphia “Oh Me Oh My” by Aretha Franklin, a re-release of KMD’s “Mr. Hood” featuring the late rapper MF DOOM, and a John Prine box set.

Brewer said the clothing aspect of his business is complementary to music, as people who enjoy a band will often want to display their love on a shirt.

Brewer said an important element to the resurgence of vinyl is how new artists now regularly put out vinyl.

“All the artists are pressing vinyl, and even eight years ago, that was not the case,” Brewer said. “You have people like Frank Ocean or Tyler the Creator or Mac Miller or DOOM or The Weeknd putting out vinyl, and that’s getting younger people into it. And once they get into it, they love it.”

Long Play will feature live music beginning around noon, with DJ Coobie, the Gretchen Emery Band and Onism all set to perform. There will also be a barbecue with hot dogs, burgers, beer, wine and non-alcoholic beverages. The event is sponsored by the Newark Music and Performance Alliance. The store will also have 15 to 20 different special record store day releases.

Owner Brian Broad’s mixture of a record store and a cafe was inspired by his previous home of Amsterdam, where stores often blend records with other concepts, such as a restaurant or a barbershop.

Broad created Long Play in 2019 after moving to Newark when his wife Brenda accepted a job at W.L. Gore. He said the main change over his two years in business was reducing the reliance on food as record and coffee sales increased. The cafe still makes its own kosher-style dill pickles and is one of the few importers in North America of the Paradiso blend by Italian coffee company Caffe Musetti.

“I’ve got a small but fervent followership for that coffee,” Broad said

Broad aims for the store to exemplify the Dutch concept of “gezellig,” a word similar to “cozy,” a place where people can hang out with a coffee, listen to music and buy a record. Broad even has guitars and amps that customers can try out.

“Think of your favorite place to be, where you know you’re warm, you don’t want to leave, you can get your favorite drink or your favorite book or movie and you can’t be anywhere else in the world,” Broad said. “That’s gezellig. And that’s what we’re trying to create here.”

Broad said that in Europe, vinyl never went away and he credited hip-hop culture with keeping record culture alive in the United States. He said a major appeal of vinyl is its tactile nature.

“All of a sudden, they got something tangible in their hands,” Broad said, describing young people discovering vinyl. “They can look at it, they can read it, and they can feel it.”

Broad wants the space to host regular concerts on Fridays or Saturdays so people can come to the store after dinner to enjoy music and shop for records.

“It really focuses the attention on what the artists are doing,” Broad said.

Theodoropoulos said Wonderland is not doing too much for Record Store Day, with nine or 10 exclusive records for the event. However, he is placing albums from his personal collection, such as Miles Davis’s “Kind of Blue” and Isaac’s Hayes “Black Moses,” and Marvin Gaye’s “Let’s Get It On,” throughout the store.

Theodoropoulos said record stores were able to adjust to COVID-19 well, using outline platforms such as Discogs to sell their inventory.

Theodoropoulos said Wonderland’s recording studio came as a way to use extra space inside the store in 2005. He originally thought of hosting a clothing section but decided that the inventory requirement on those ventures would be too high compared to a recording studio, because after the initial start-up cost, there is no need to constantly replace sold inventory.

Before the pandemic, Wonderland hosted concerts on the third Saturday of every month.

Theodoropoulos used to be a mechanical engineer before taking over Wonderland. The store was founded in 1972 and next year, it will celebrate its 50th anniversary.

“I’m not making nearly as much money, but I’d rather be happy and skip to work than be miserable,” Theodoropoulos said.

Both Broad and Theodoropoulos said the vinyl resurgence is partially a response to streaming, as young people wanted to have an experience with owning and collecting physical music instead of just having streaming access.

“Everybody has all their music on their phone and it’s really poor quality.” Theodoropoulos said. “Once they hear the quality that’s on records, they just get into it.”