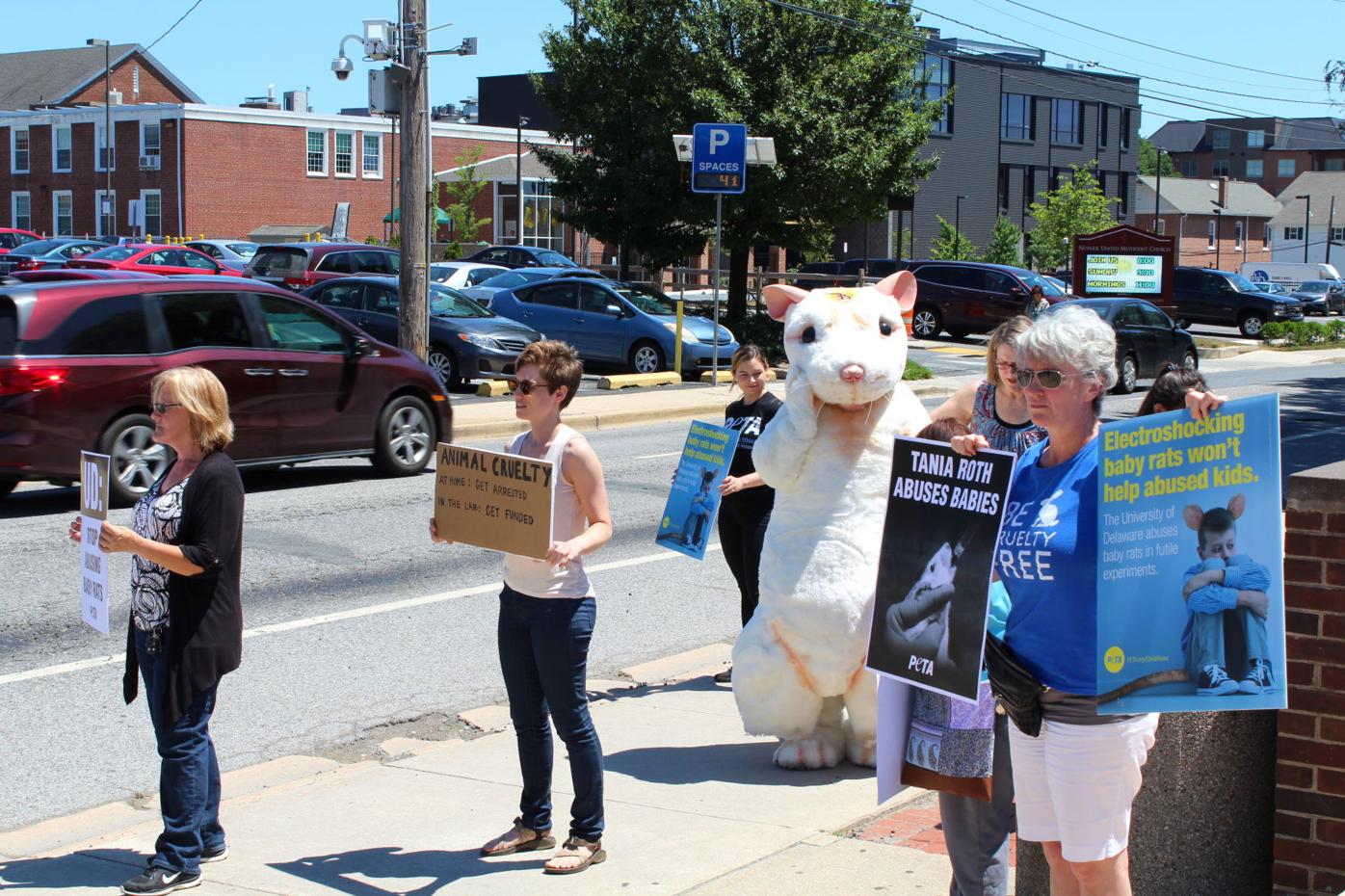 A group of protesters, led by PETA, organize outside of McKinly Laboratory, a University of Delaware building, to protest the research techniques of a professor on Monday. 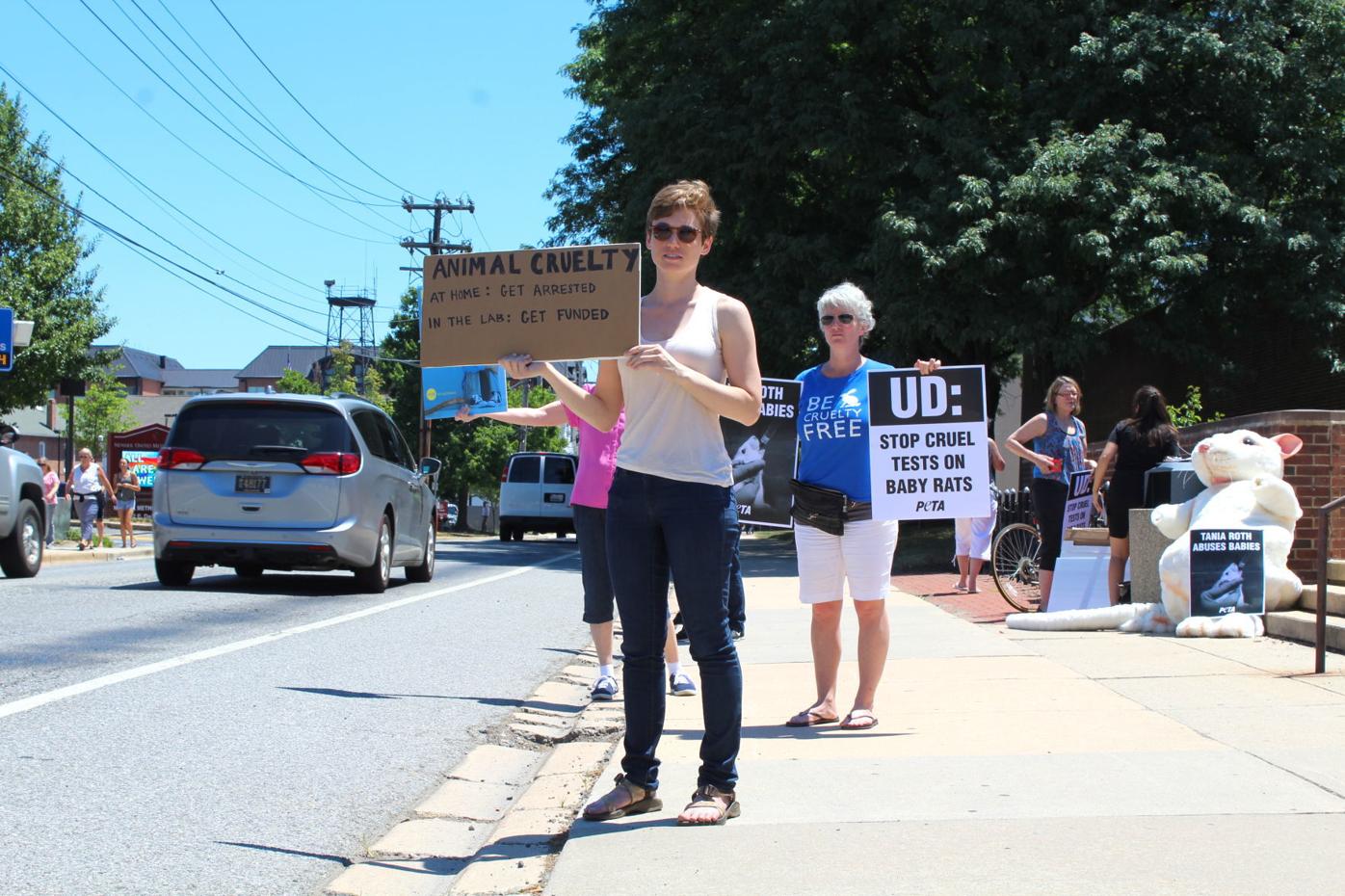 PETA called for a protest against University of Delaware’s Tania Roth, associate professor of psychological and brain sciences. PETA alleges that Roth’s use of rats for her research on the effect abuse has on the brain is inhumane. 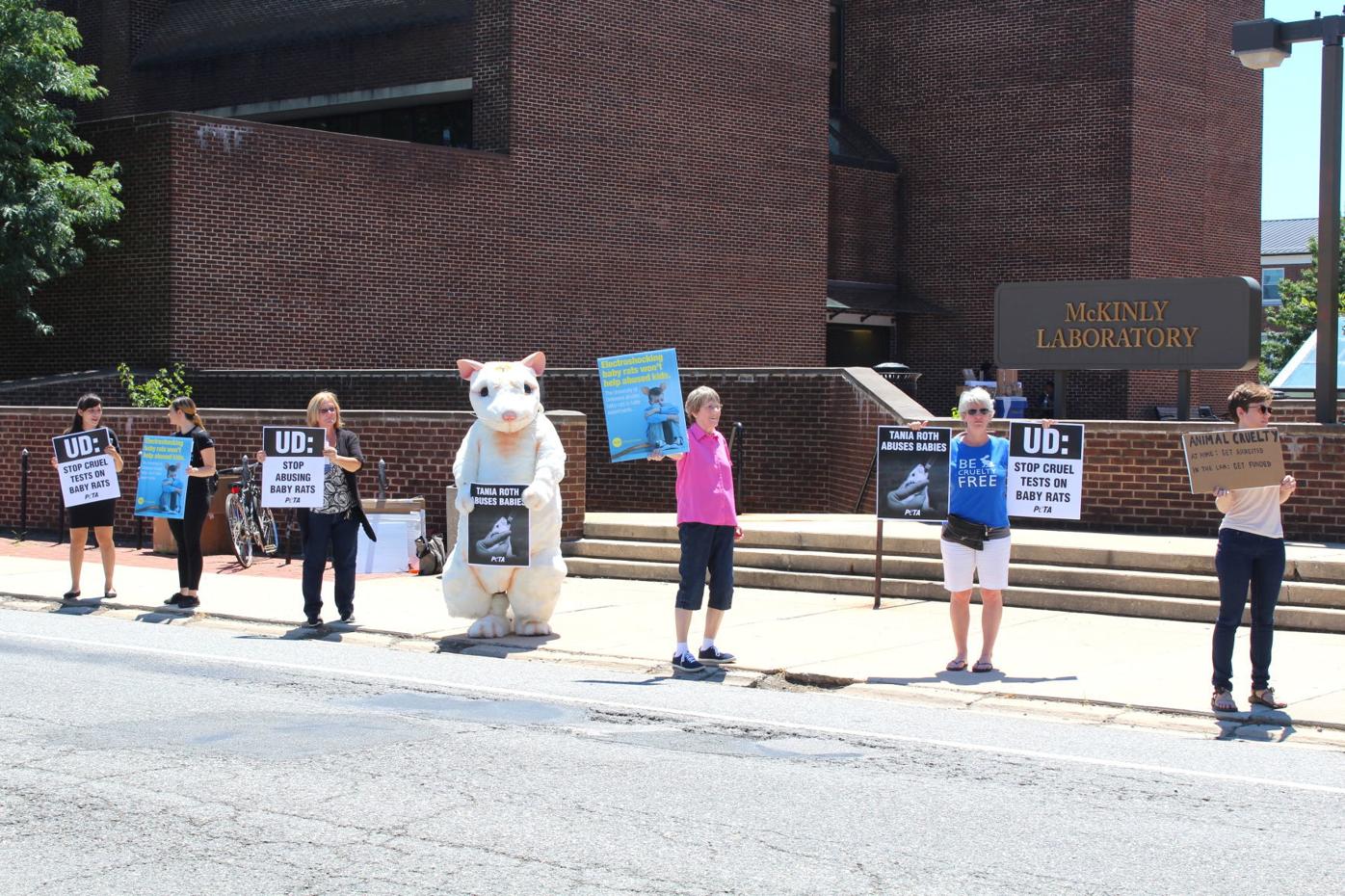 Protesters, led by PETA, line up outside of McKinly Laboratory, a University of Delaware building. The demonstrators are against Associate Professor of Psychological and Brain Sciences Tania Roth’s use of rats in her research on the affect of abuse during early development on the brain.

A group of protesters, led by PETA, organize outside of McKinly Laboratory, a University of Delaware building, to protest the research techniques of a professor on Monday.

PETA called for a protest against University of Delaware’s Tania Roth, associate professor of psychological and brain sciences. PETA alleges that Roth’s use of rats for her research on the effect abuse has on the brain is inhumane.

Protesters, led by PETA, line up outside of McKinly Laboratory, a University of Delaware building. The demonstrators are against Associate Professor of Psychological and Brain Sciences Tania Roth’s use of rats in her research on the affect of abuse during early development on the brain.

A small group of demonstrators led by People for the Ethical Treatment of Animals gathered outside the University of Delaware’s McKinly Laboratory on Delaware Avenue on Monday to protest a professor’s research techniques.

On the first day of the university’s second summer session, protestors held signs that read “UD: Stop abusing baby rats,” “Electroshocking baby rats won’t help abused kids” and “Animal cruelty – at home: get arrested, in the lab: get funded” as a stand against research conducted by Tania Roth, an associate professor of psychological and brain sciences.

“For nearly 20 years, Tania Roth has been tormenting and killing mother rats and their infants in pointless, cruel and inhumane experiments,” said Katerina Davidoich, a spokesperson for PETA. “We’re calling on the University of Delaware to put a stop to these experiments.”

Roth’s research focuses on the long-term influence of maltreatment in early-life caregiving experiences. She uses developing and adult male and female rats to study the brain regions that are significant in behavioral and mental health.

PETA alleges that Roth has used $2 million of public funds in experiments that “have no benefit to human health,” according to Davidoich. PETA has filed a complaint with the National Institute of Child Health and Human Development to ask it to cut funding for her research.

“Rats feel pain and fear and loneliness just like the dogs and cats we keep as companions,” Davidoich said. “Unfortunately, rats are exempted from the Animal Welfare Act; they don’t even have minimal protections in laboratories, so it’s really important that we get pressure from the school to stop these cruel experiments.”

In a prepared statement, UD spokeswoman Andrea Boyle Tippett said the institution is committed to “providing the highest standard of humane treatment to animals used in research, and we follow all guidelines from the National Institutes of Health Office of Laboratory Animal Welfare.”

“Dr. Tania Roth is an accomplished and respected researcher in the field of behavioral epigenetics. Her important research helps inform appropriate treatments for children who have been abused or traumatized,” Tippett continued. “The University of Delaware supports her vital research program as part of our fundamental mission to make a positive impact on society through education and scholarship.”

Charlotte Chaze, a graduate researcher in biochemical engineering at the university, was among the protesters gathered outside McKinly Laboratory.

Roth did not respond to a request for comment.

In an editorial published Monday in the News Journal, Roth wrote that her work “seeks to understand how negative experiences early in life have lifelong impacts on the brain and behavior…. Without the animals I work with, I would not be able to uncover the basis of how our experiences affect our brains. We already are using information we have fathered from our work with rodents to inform intervention efforts with neglected and at-risk children in the US and abroad.”

According to UD, the Office of Laboratory Animal Welfare in the National Institutes of Health investigated the claims against Roth and found that her research complies with the regulations and guidelines.

Could it be that we'll go back to the good old days and get rid of the rats and perform experiments on the 4,000 new freshman UD plans to add while paying them minimum wage or in exchange for free tuition.

Fellow PETA members: this is small potatoes. What about the millions of rats being slaughtered in America's inner cities? I say: liberate the housing projects and create "safe spaces" for peaceful enjoyment of rodent life.

Your tax dollars at work, folks. I hope at least the rats weren't getting top shelf.

Rats are just as feeling as any other living being. I'm disappointed that tax payer money was used in such a terrible way and caused these animals so much suffering.

You are actually wasting your time on this Allison. You want rats to flourish and increase in number? Would you prefer that testing be done on humans? Peta should disband. Your organization is a laughing stock. What is your stand on abortion?

This absolutely incredible that these people care so much about rats, but they can care less about a baby being aborted.

I find it truly upsetting that my tax dollars are being used to torment rats. It's 2018: Sophisticated technology exists that generates reliable results that can actually be applied to humans. Enough of this archaic barbarism already.

---Charlotte Chaze, a graduate researcher in biochemical engineering at the university, was among the protester---- Yet, Charlotte Chaze is a DEMOCRAT AND SUPPORTS ABORTION !!! SAVE THE ANIMALS BUT NOT THE BABIES.....DEFINITION OF HYPOCRITE !!...........https://voterrecords.com/voter/70650284/charlotte-chaze

Nutty Katerina Davidovich says, "Try to understand the severe pain that the lobster feels when you put them in a pot of boiling water" !!!......https://bangordailynews.com/2017/08/02/news/midcoast/two-topless-women-want-you-to-think-of-them-when-you-boil-your-lobsters/

This Katerina Davidovich, PETA is another millennial vegan nut !! She even wants to take my down pillow away !! https://www.youtube.com/watch?v=3EUJZ-eM51s

This woman forces alcohol down the throats of newborn rats, stuffs pregnant rats into tubes and blasts them with strobe lights and terrifies rats by shocking their feet. So much for the university's commitment.

TWO DECADES of torturing rats and for what? Absolutely nothing. UD must stop this madness immediately.

Tormenting rats will not help children who are suffering fallout from abuse and trauma. Funds and efforts should be directed to programs that help children directly, instead of cruel experiments on animals.

I despise you. I think you have very little intelligence. No moral compass. You pray that one day if you pull on that little piece of taffy between your legs that you'll get the slightest bit aroused, but I agree!!!!!!! These PETA people are worse humans than you!!!!!