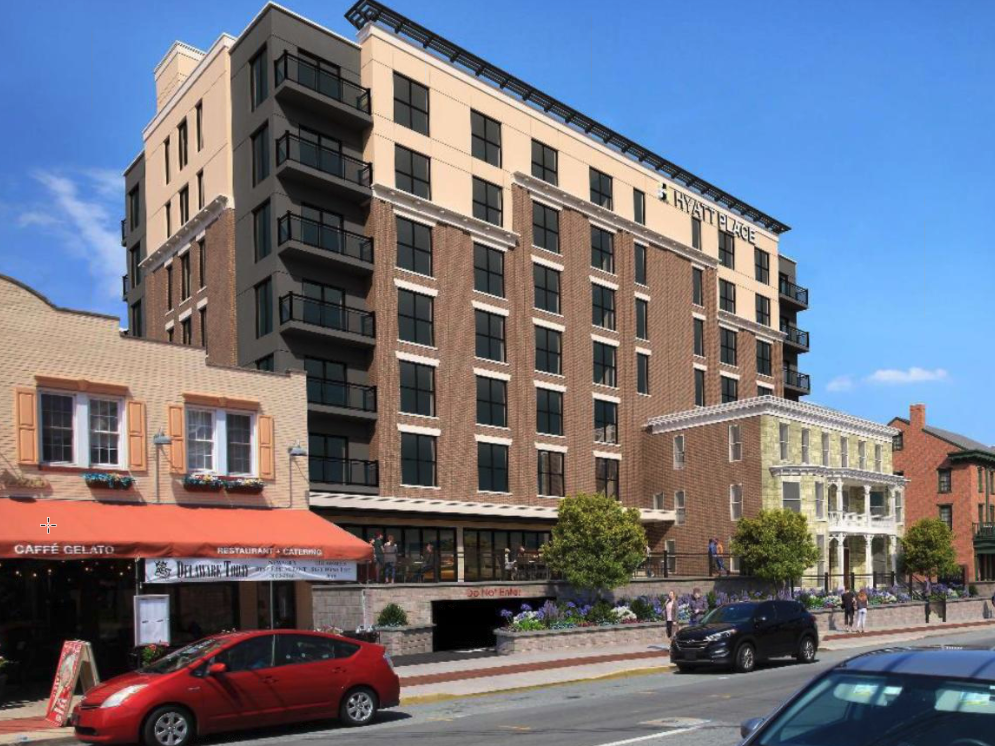 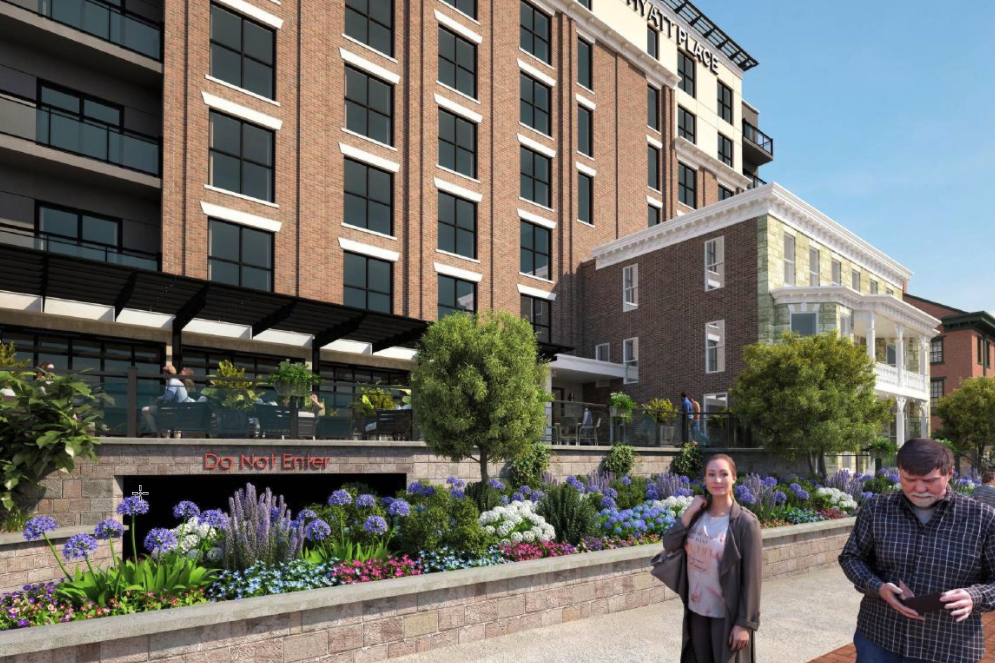 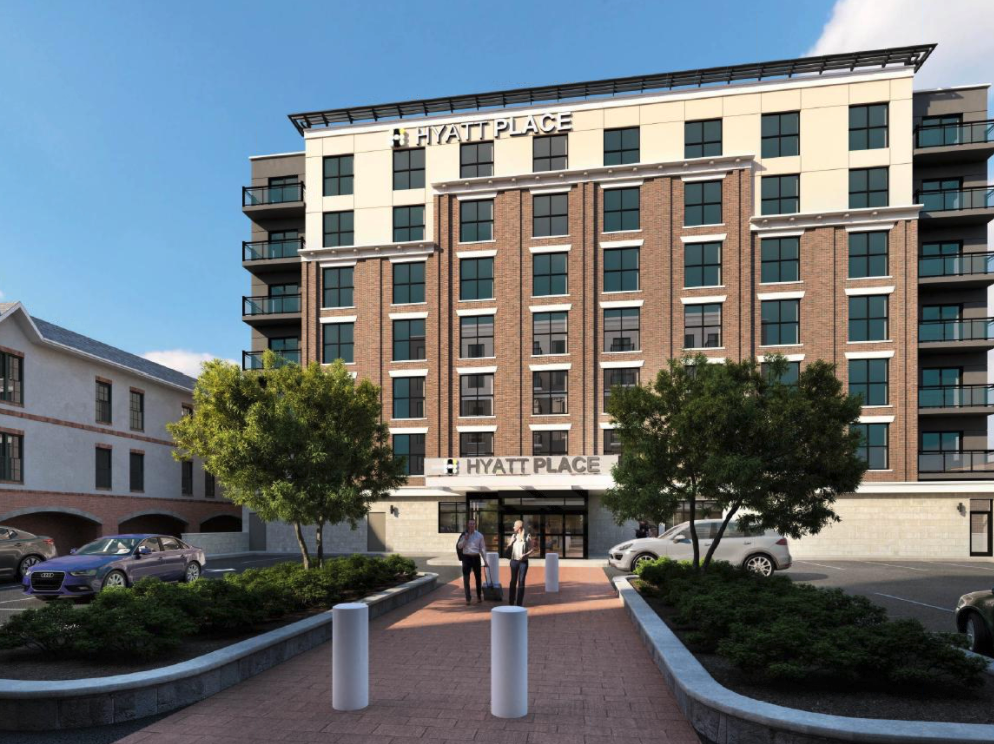 An artist’s rendering shows the new design for Lang Development Group’s Main Street hotel. This view is from behind the building and shows the lobby and a small surface parking lot for visitors. 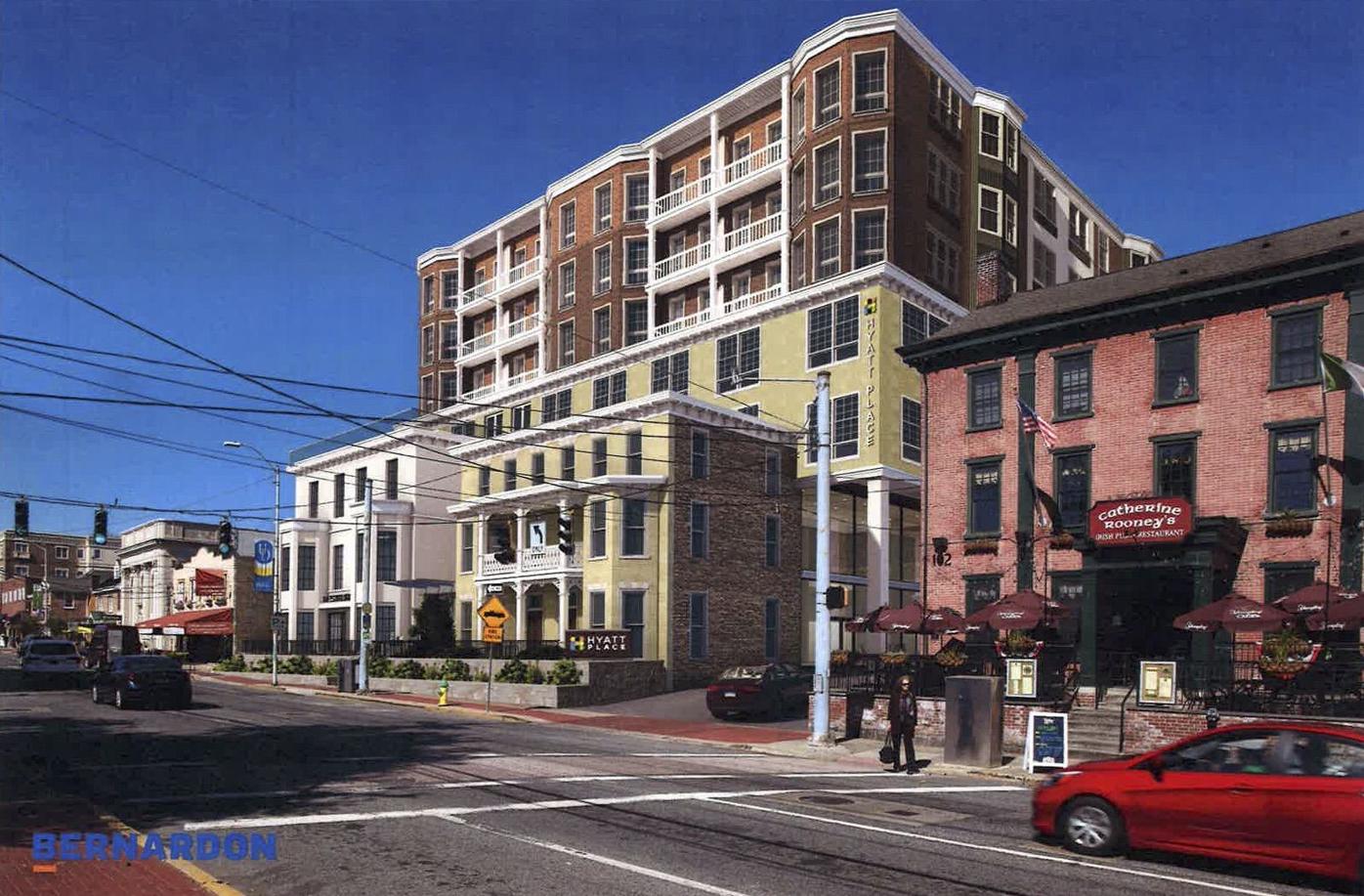 This is the previously approved design of Lang Development’s Main Street hotel. Lang has since scrapped this design due to the effects of the pandemic. 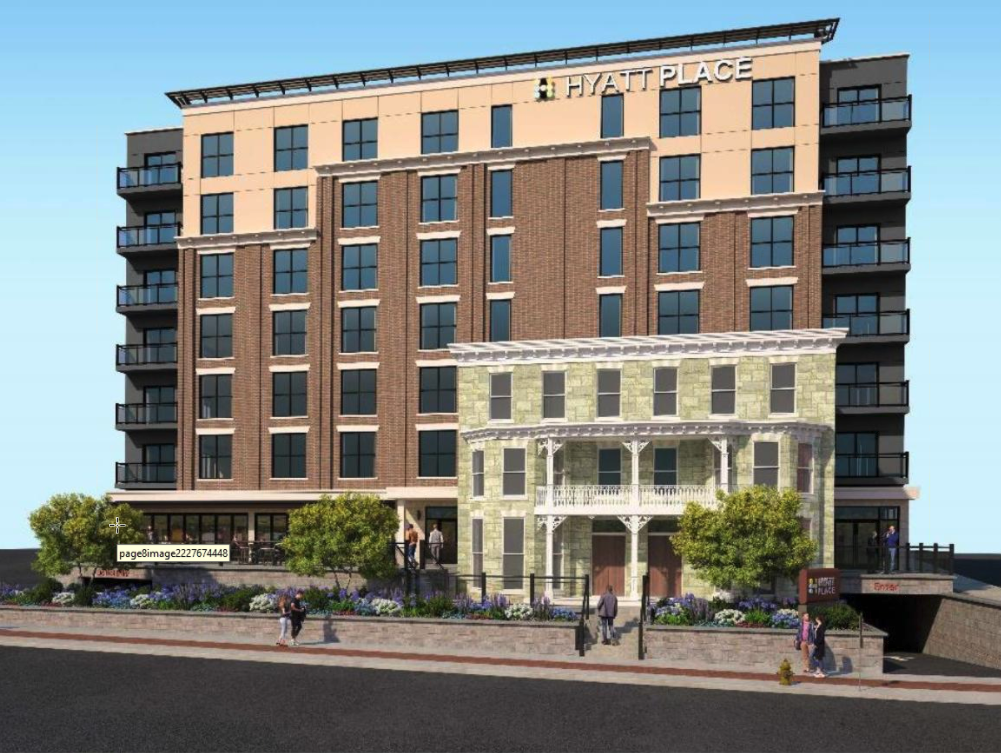 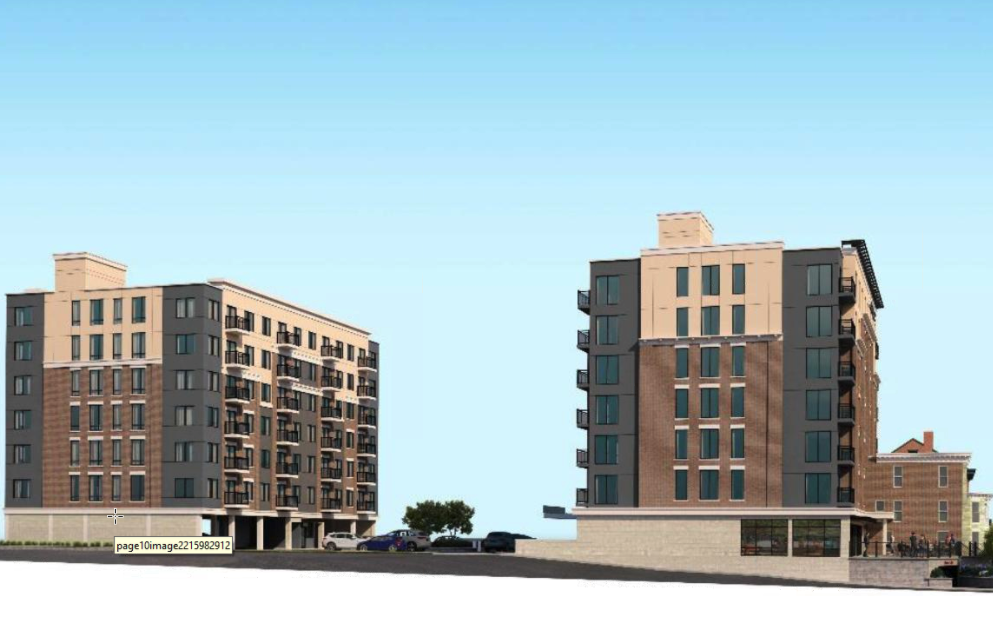 An artist’s rendering shows the new design for Lang Development Group’s Main Street hotel. This view is from the side and shows the hotel building fronting Main Street on the right and the rear apartment building on the left. 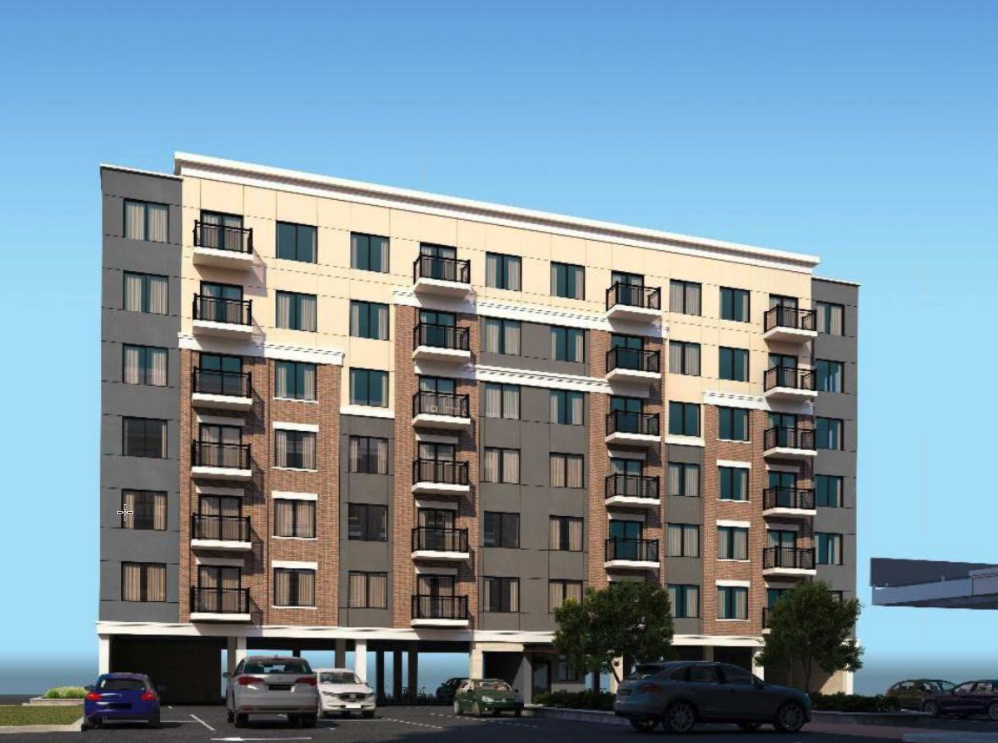 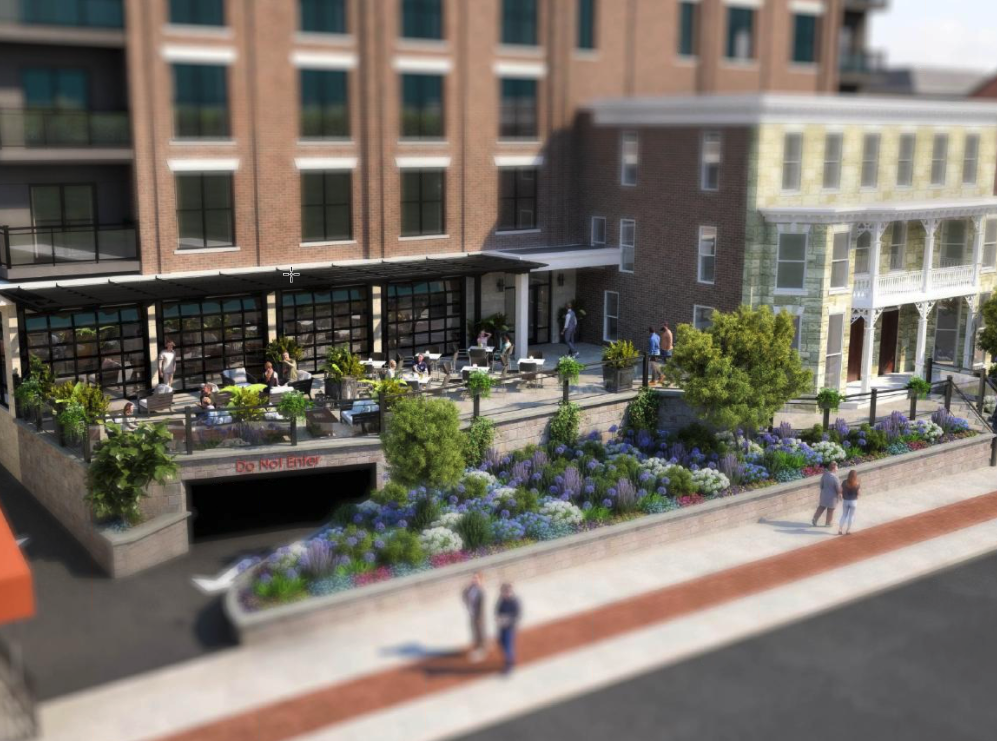 An artist’s rendering shows the new design for Lang Development Group’s Main Street hotel. This view is from behind the building and shows the lobby and a small surface parking lot for visitors.

This is the previously approved design of Lang Development’s Main Street hotel. Lang has since scrapped this design due to the effects of the pandemic.

An artist’s rendering shows the new design for Lang Development Group’s Main Street hotel. This view is from the side and shows the hotel building fronting Main Street on the right and the rear apartment building on the left.

Lang Development Group is seeking to make major changes to its proposed Main Street hotel, reducing the number of hotel rooms, replacing the office space with apartments and splitting the project into two separate seven-story buildings.

The planning commission recommended approval of the revised plan Tuesday night, putting the controversial project back in the hands of city council two years after it approved the initial version during a contentious public hearing that dragged on past 1 a.m. in March 2019.

The previously approved plans called for a seven-story building containing 144 hotel rooms, commercial space, 19,500 square feet of office space and a parking garage at 96 E. Main St., across from the Academy Street intersection.

Originally aiming to open the hotel this summer, Lang demolished the former Abbott’s Shoe Repair building and the rear portion of the historic Green Mansion in fall 2019 and dug a pit where the underground parking garage will go. Work was halted in May 2020.

Changes in the real estate market brought on by the pandemic necessitated an overhaul of the project, developer Jeff Lang said.

Because of that, he said, it wasn’t feasible to get financing for the original project, so he had to find a way to redesign it to work financially while still honoring his franchise agreement with Hyatt.

The new proposal shrinks the hotel to what Lang called “a much more manageable size” of 104 rooms and reduces the amenity space from 10,000 square feet to 2,000 square feet, including nixing the rooftop pool and deck, among other features. It also eliminates the office space and commercial space and replaces it with 48 two-bedroom apartments.

It also changes the look of the buildings, though it will still incorporate part of the Green Mansion, as required by the city’s historic preservation law. The Green Mansion – which will house the hotel’s conference room as well as some suites – will jut out to the sidewalk and be flanked by a patio. Behind that, the hotel will rise up seven stories, eliminating the “wedding cake” design that would have been a more gradual rise.

Behind the hotel will be a surface parking lot. At the back of the site will be a second seven-story building containing ground-level parking and six floors of apartments. Underground parking will run under the entire property, and cars will enter and exit the parking garage from Main Street.

The apartment building will not extend all the way back to the rear of the property as originally planned, which Lang said benefits the city because it avoids splitting the city-run parking lot. There is now room for an access road behind the building, which will link both sides of the city’s lot.

The project includes 171 parking spaces, which is 73 fewer than the previous version of the project and 39 fewer than required by code.

The planning commission granted a parking waiver for 39 spaces. Lang will pay $181,000 for the waiver and also agreed to allow the public to pay to park in the garage when space is available. Parking waivers allow developers to reduce the amount of parking included in a project by paying into a fund that is supposed to be used for public parking projects.

Lang told the planning commission that the project will be an economic driver for Newark and said the people it will bring downtown will be a shot in the arm for businesses decimated by the pandemic.

“The business opportunity here, I think, is immense for the street,” adding the hotel will bring in a different, more steady customer base to complement the college students that are here for nine months of the year.

The revised project was well-received by the planning commission, which voted 5-0 to recommend approval to city council.

“I like this proposal. I think it’s a significant improvement over the other proposal,” Commissioner Alan Silverman said, adding that he likes that the project is smaller now.

“Given a second chance, you’ve come up with a better project,” Hurd said.

The project now moves on to city council for a final vote March 8.