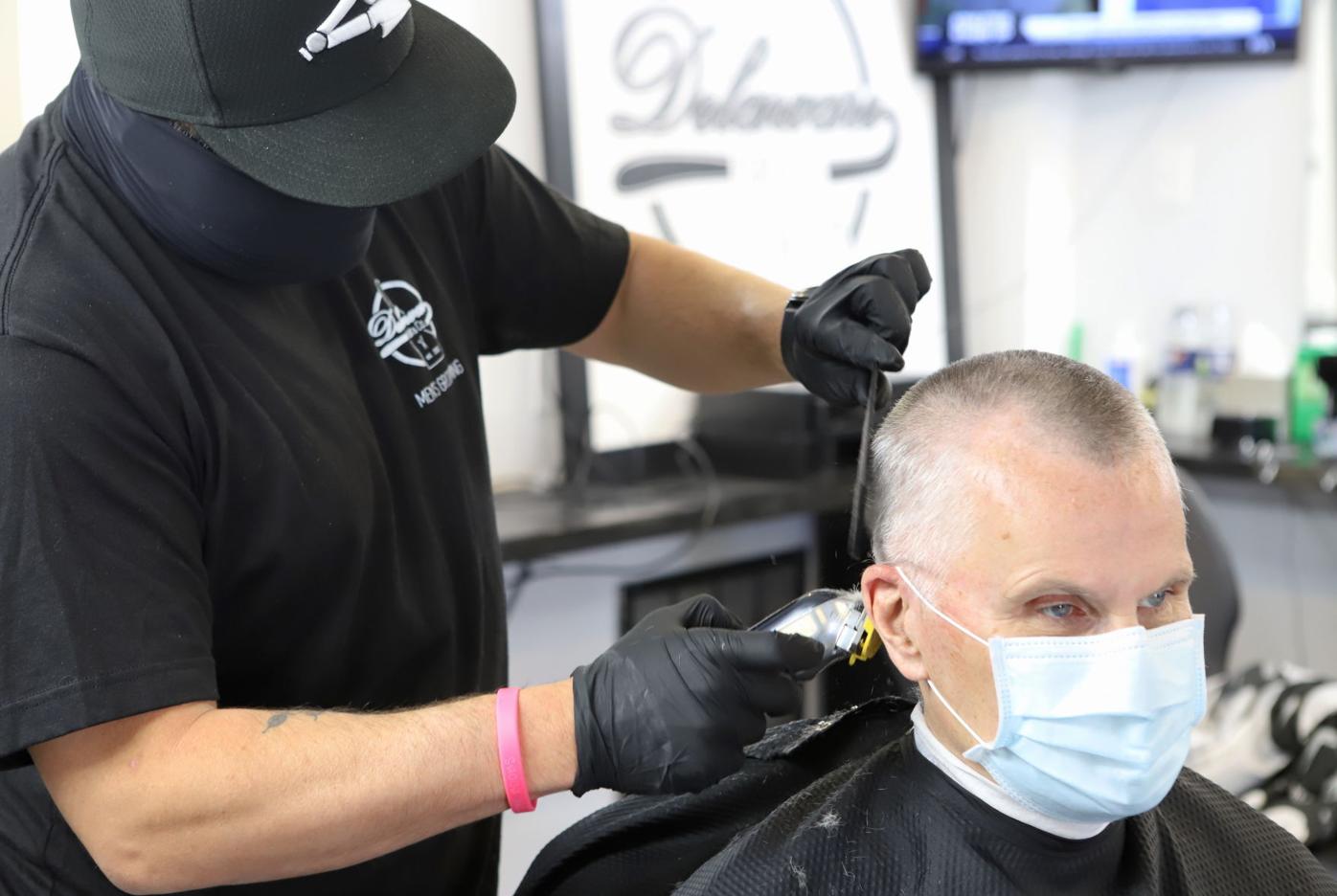 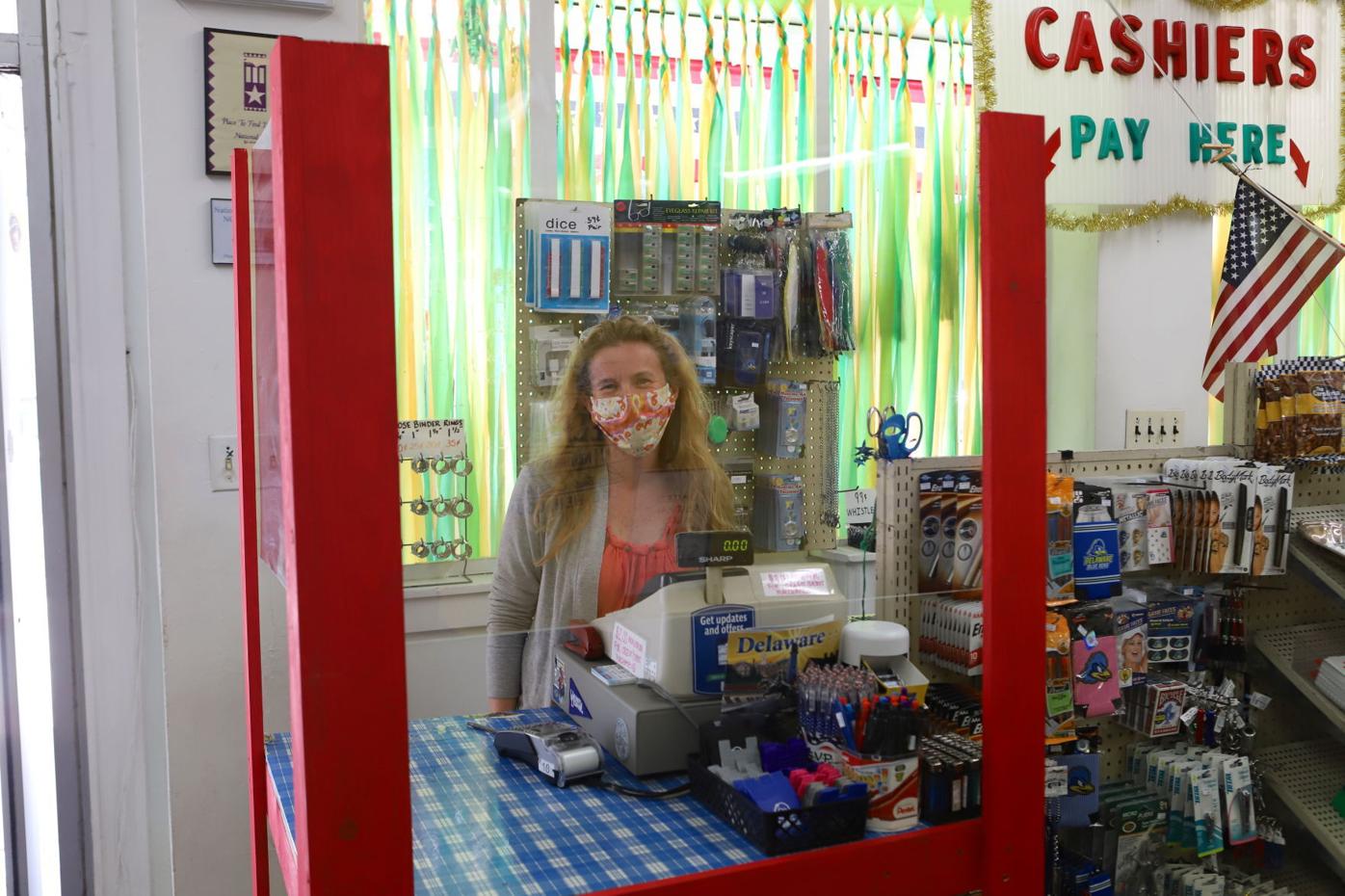 Cindi Handloff Brooks stands behind the counter at National 5 and 10, where a plexiglass shield was installed for protection from the coronavirus. 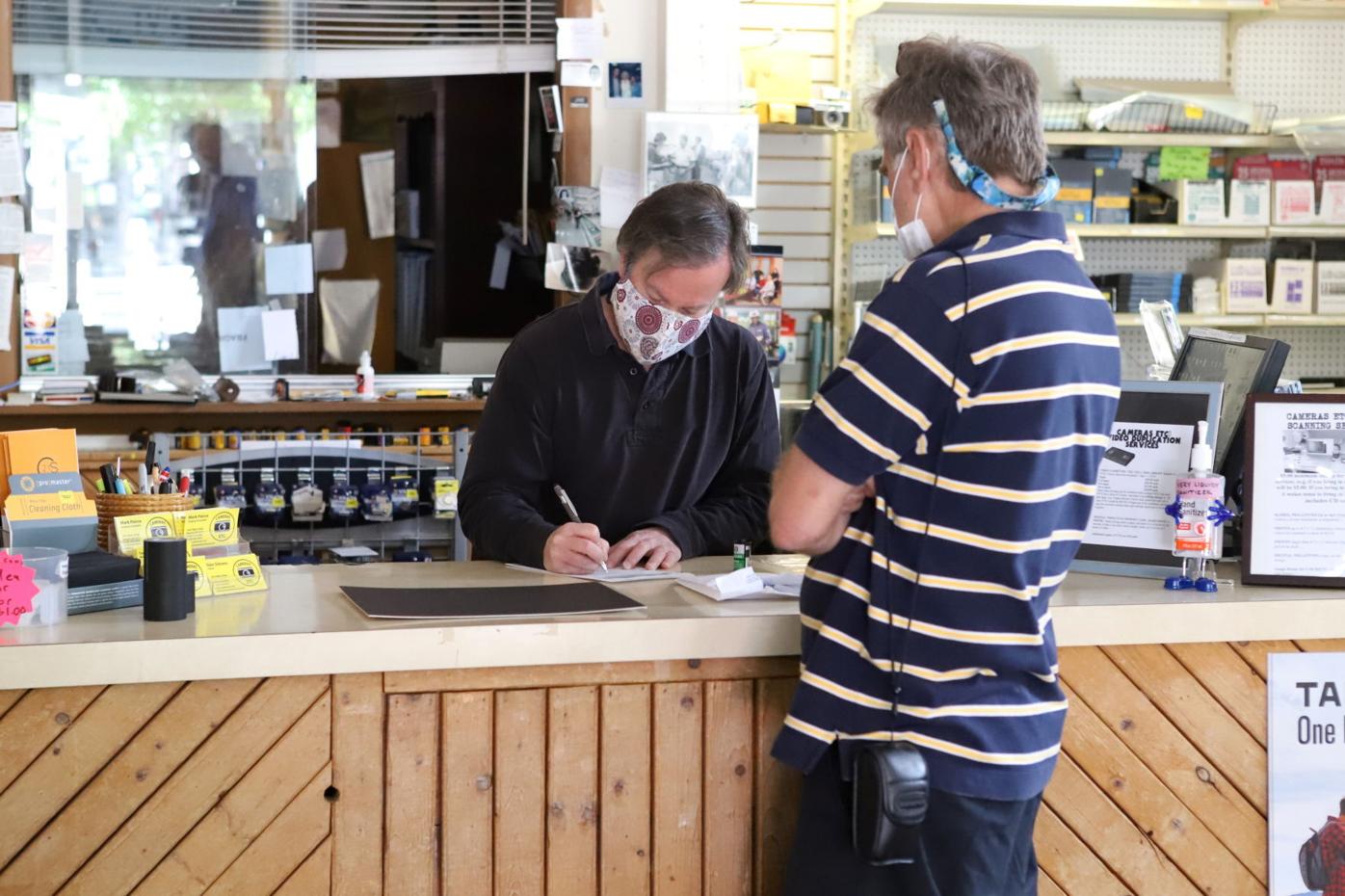 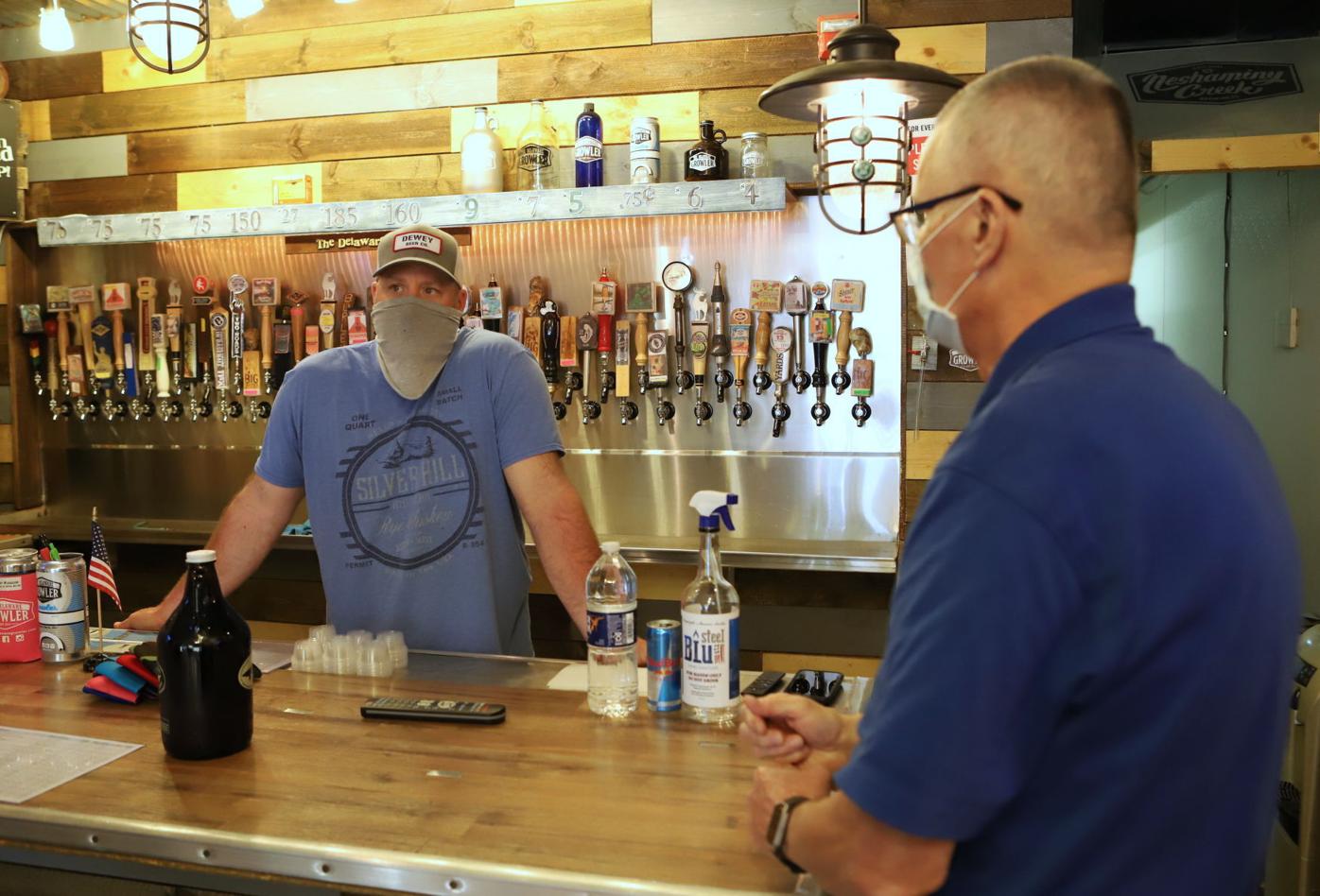 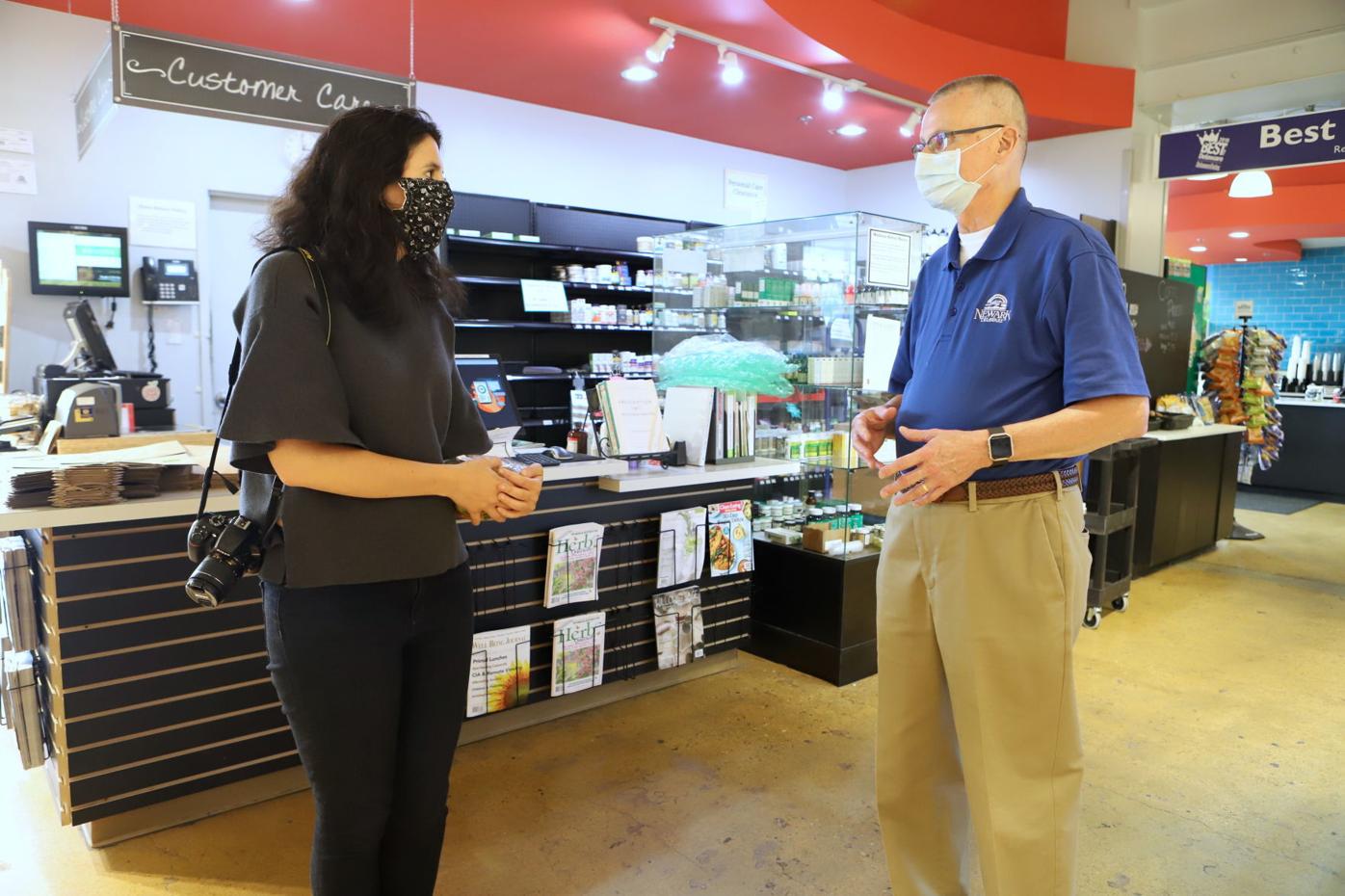 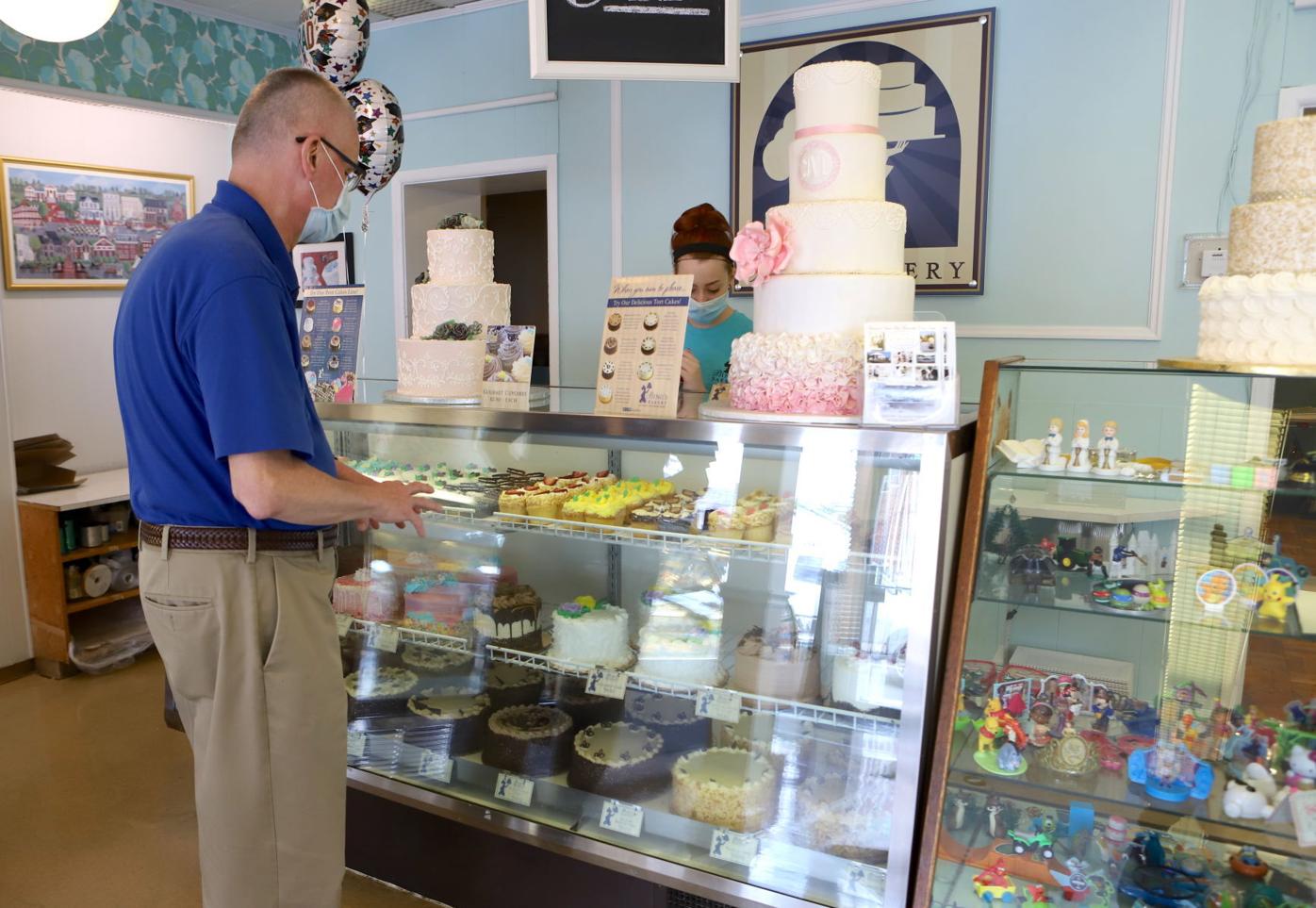 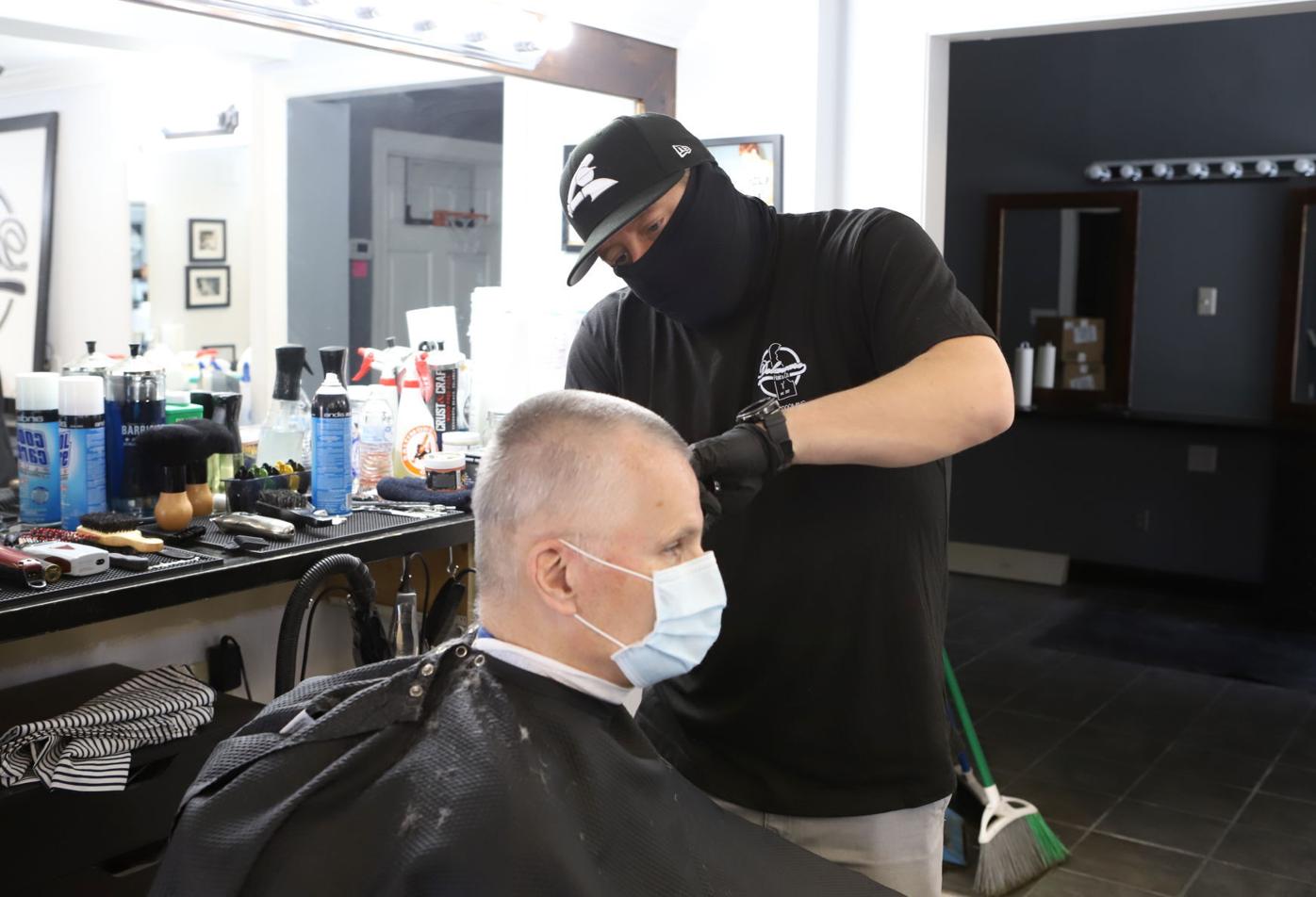 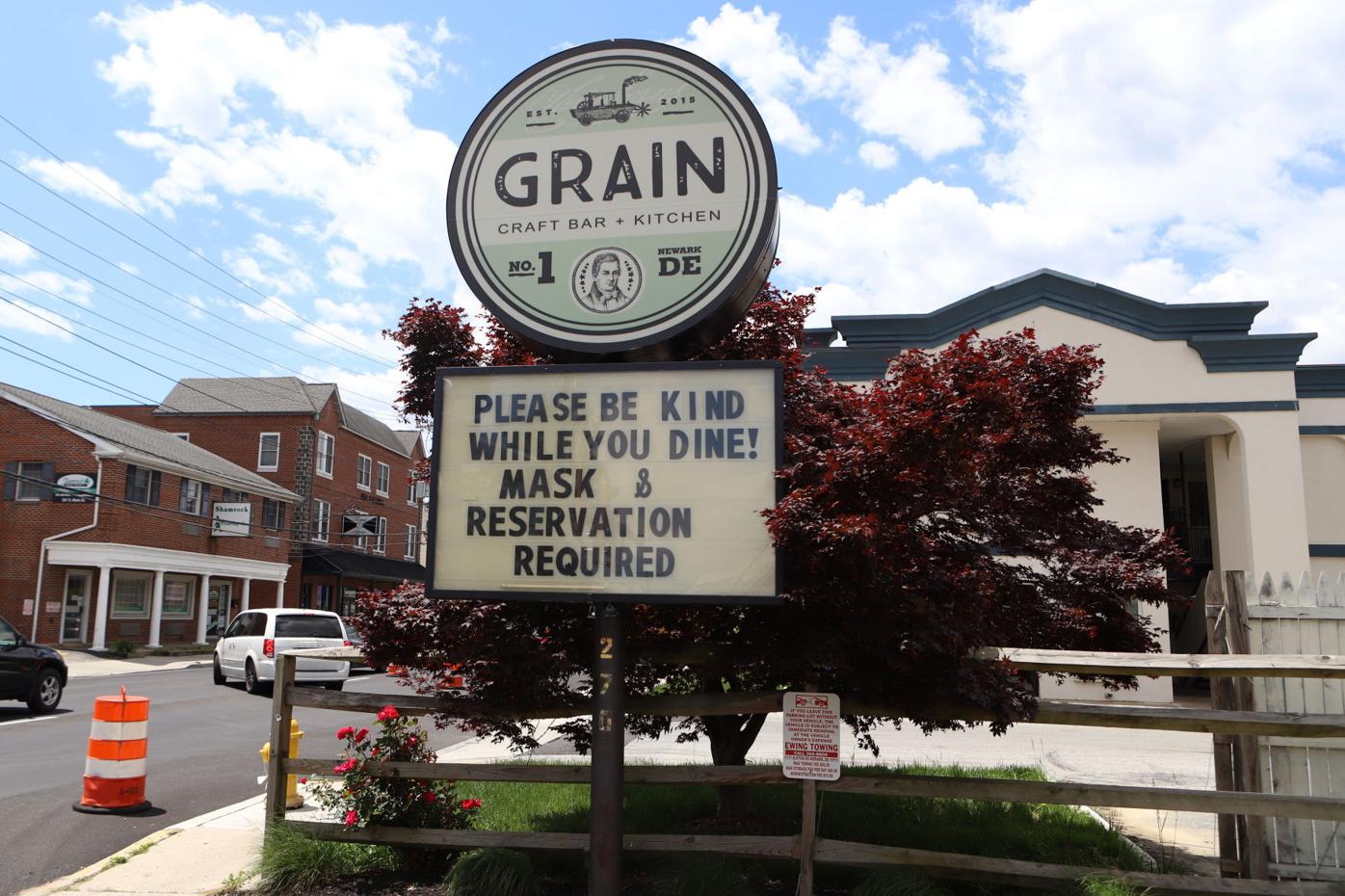 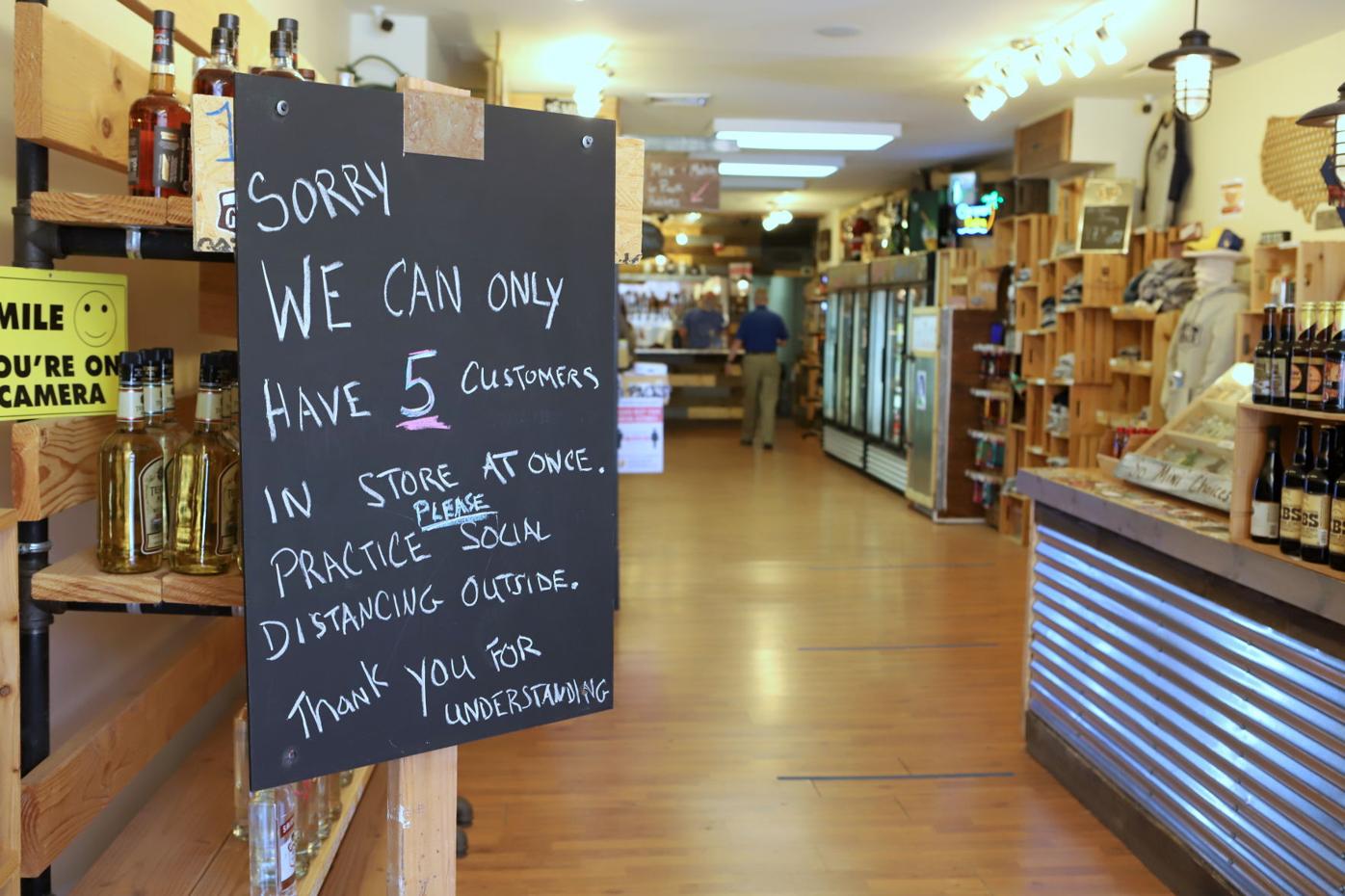 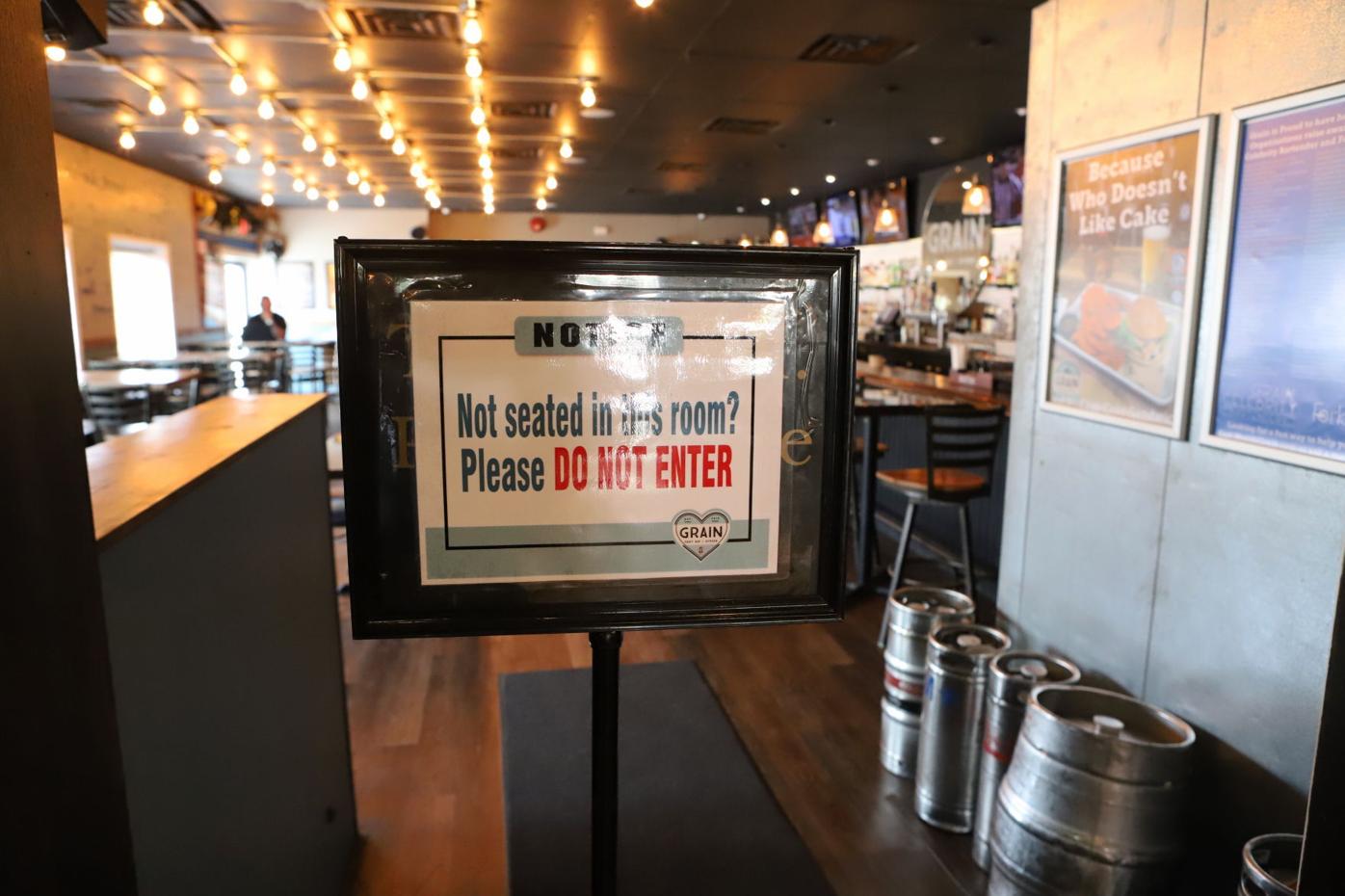 Cindi Handloff Brooks stands behind the counter at National 5 and 10, where a plexiglass shield was installed for protection from the coronavirus.

Slowly, but surely, life is returning to downtown Newark.

Up and down Main Street this week, Newarkers started to ease back into habits once considered routine but made impossible once the coronavirus pandemic hit in mid-March.

At eateries like Grain Craft Bar + Kitchen and Home Grown Café, diners enjoyed meals on sun-kissed patios and rediscovered what it’s like to eat inside a restaurant. At National 5 and 10, shoppers browsed for Blue Hen-themed merchandise. At Delaware Hair & Co., customers were eager to shed their shaggy pandemic hairstyles.

Monday marked the first day of Phase 1 of Delaware’s economic reopening plan, which allows many businesses to reopen as long as they follow strict social distancing guidelines. Businesses must require customers to wear masks, limit occupancy to 30 percent of what is allowed by the fire code and strictly enforce a six-foot distance between customers. On June 15, the limit will increase to 60 percent occupancy.

“It gets us that much closer to a sense of normalcy and gives us a chance to make a living again,” Delaware Hair and Co. owner Matt Scherr said as he cut Mayor Jerry Clifton’s hair on Monday morning.

After being closed for more than six weeks, barbers and hair salons were open by appointment only, with only two customers allowed in at a time. On Monday, that expanded, which Scherr said essentially means he can have a customer in every other chair.

All of his staff is back, working on a rotation schedule, he said, noting there is pent up demand from customers who went longer than usual without getting their hair cut.

“We don’t have enough appointments to go around,” Scherr said.

Delaware Hair and Co. was the first stop on Clifton’s tour of Main Street on Monday, as he stopped into downtown businesses to show his support and wish them luck with their reopening.

“I feel confident people are going to start back patronizing our businesses,” Clifton said. “The attitude of business owners is phenomenal.”

It shouldn’t be overlooked that the pandemic is far from over. No date circled on the calendar or timeline dreamed up by the governor’s economic advisors can change the fact that people are still getting sick and dying or that there is still plenty that scientists don’t understand about how coronavirus spreads.

Delaware was successful in flattening the curve, and the rate of new cases and hospitalizations have fallen significantly since the height of the outbreak. However, in the week leading up to the reopening, 689 more Delawareans tested positive for COVID-19, including 15 Newark residents. In the same time period, 40 Delawareans died from the virus, including a sixth patient at Newark Manor Nursing Home.

“I understand people are hesitating,” said Lexi Hawkins, general manager at Grain. “We’re doing everything we can to make people comfortable.”

Following state guidelines, Grain removed some of its tables to reduce capacity, requires its employees to wear masks, uses disposable menus and utensils and restricts customer movement throughout the restaurant.

The capacity limit means Grain can serve up to 56 people inside, plus more outside, which is less of a reduction than it sounds like, Hawkins noted. Even a full dining room is fewer people than the maximum capacity allowed by the fire code, which is only reached during the busiest bar nights, she said.

She said business was steady Monday, and the staff is excited to see customers again.

“It’s been a bit lonely only serving from the window,” she said, referring to the pickup window Grain created to serve takeout customers. “So far, everyone has been kind and understanding.”

“We’re excited to be back,” McConnell said. “It’s been nice today seeing people and carrying plates in my hand.”

Home Grown remained open for take-out and delivery during the shutdown, but lost 80 percent of its business during what is usually the busiest time of the year.

“It wasn’t fun, but the idea was to stay open to keep feeding the community,” McConnell said.

One thing that helped keep the restaurant afloat was its initiative to serve meals to ChristianaCare doctors, nurses and support staff. Customers donated more than $20,000 toward the effort, which provided hundreds of meals per week.

Ryan German, owner of Caffé Gelato, said he is spreading out tables to exceed state guidelines and pumping more fresh air into the restaurant. He’s also working with the city to expand his outdoor seating.

“We’re going to sanitize everything so well, it’s safer than going to a public place,” he said.

“We’re looking forward to having diners in the restaurant,” he added. “That’s why we’re here.”

At Bing’s Bakery, customers trickled in to browse the cases teeming with cookies, brownies, cheesecakes and other goodies.

During the height of the pandemic, the business remained opened but focused on curbside pick-up, delivery and special events like a drive-thru doughnut sale.

“We’ve definitely had tremendous loss. This was our cake season, with graduations and communions,” owner Carla Guzzi said. “Thank you to our customer base. They’re the reason we made it through the pandemic. This was the hardest thing for me to get through.”

Guzzi added that she was happy to be able to reopen Bing’s Bake & Brew in mid-May. The coffee shop opened on Amstel Avenue in December and was still establishing itself when the pandemic hit, and the Guzzi family decided to temporarily close it to focus on the core business.

At National 5 and 10, plexiglass dividers were installed at the check-out counter, masks were provided to customers not already wearing ones, and employees provided each customer with a squirt of hand sanitizer as they walked in the door.

The store fulfilled online orders throughout the shutdown and was able to open by appointment only for the last couple weeks. Monday was the first day customers could enter at their leisure.

“The website got very busy,” said Cindi Handloff Brooks, whose family has owned the store for decades. “It didn’t make up for being closed, but it was an income.”

She expects a slow summer, but hopes more customers start making their way in.

“Hopefully, with the construction almost done, locals will come out of hiding,” Brooks said.

Newark Natural Foods was doing a brisk business Monday. As an essential business, the store was able to stay open throughout the shutdown, except for a few days in March when it closed due to possible COVID-19 exposure.

The store marked arrows on the floor to make aisles one-way, closed its café buffet and implemented other social distancing measures.

“We’ve had a pretty strong customer flow,” marketing coordinator Dylan Furlano said. “Our community has been great during this time.”

Darren Thomas, owner of Audio Works, said his business remained strong, and the Main Street construction project was a bigger deterrent than the pandemic.

“We’re waiting for this road to reopen, then we’re all thumbs up,” Thomas said, noting that as an automotive business he was allowed to stay open.

“You coop someone up in their house, and they’re going to want to buy something,” he said. “Browsing went down, but buying went up.”

Other businesses were taking it slower, preferring a more gradual reopening.

“It’s still, in my opinion, safer to be by appointment,” Simons said.

He continued working through the shutdown, mostly doing services like memory card recovery and scanning. He also took advantage of the time to rearrange the store to create a gallery and lecture space.

You’ve Been Framed, which is marking its 40th year on Main Street, is also remaining appointment-only for the rest of the week.

“We will be posting regular hours next week but plan to continue encouraging the public to book appointments to control our occupancy and, as we've discovered in the last couple weeks, the one-on-one attention has been greatly appreciated by our customers,” owner Rich Hanel said.

Cheeburger Cheeburger was still limiting customers to take-out on Monday, though general manager Kala Mullins said she planned to open up for dine-in service later in the week.

She expects two or three employees to come back, but some others don’t feel confortable doing so. Even though she’s been working through the shutdown, she admitted some apprehension herself.

“I’m going to wait a month before I go out, because I’m terrified,” she said.

A number of businesses have yet to reopen, and several likely never will. Mediterranean Grille announced early on in the shutdown that it would close permanently, and Aunt Margaret’s Antique Mall and The Perfect Blend waffle shop made similar announcements recently. On Main Street this week, there were rumblings of more closures coming soon.

“People fought to make it through the construction only to have the pandemic hit. That was the straw that broke the camel’s back,” Clifton said. “My heart goes out to the people who can’t reopen.”

He expressed optimism that as the economy recovers, new businesses will look to make Newark their home.

Already, two have announced plans to open soon. The Daily Veg, a vegan eatery in Pike Creek, will open a second location in the former Jimmy John’s storefront, and a Korean restaurant called Sopoong will open behind Cameras Etc. in a space last occupied by Subway.

nice to see the small business opening but downtown newark is not a place i frequent due to rude manners and foul language from the ud community. having to walk in the street because the kids are six abreast and listening to foul language in restraunts is not a fun outing.