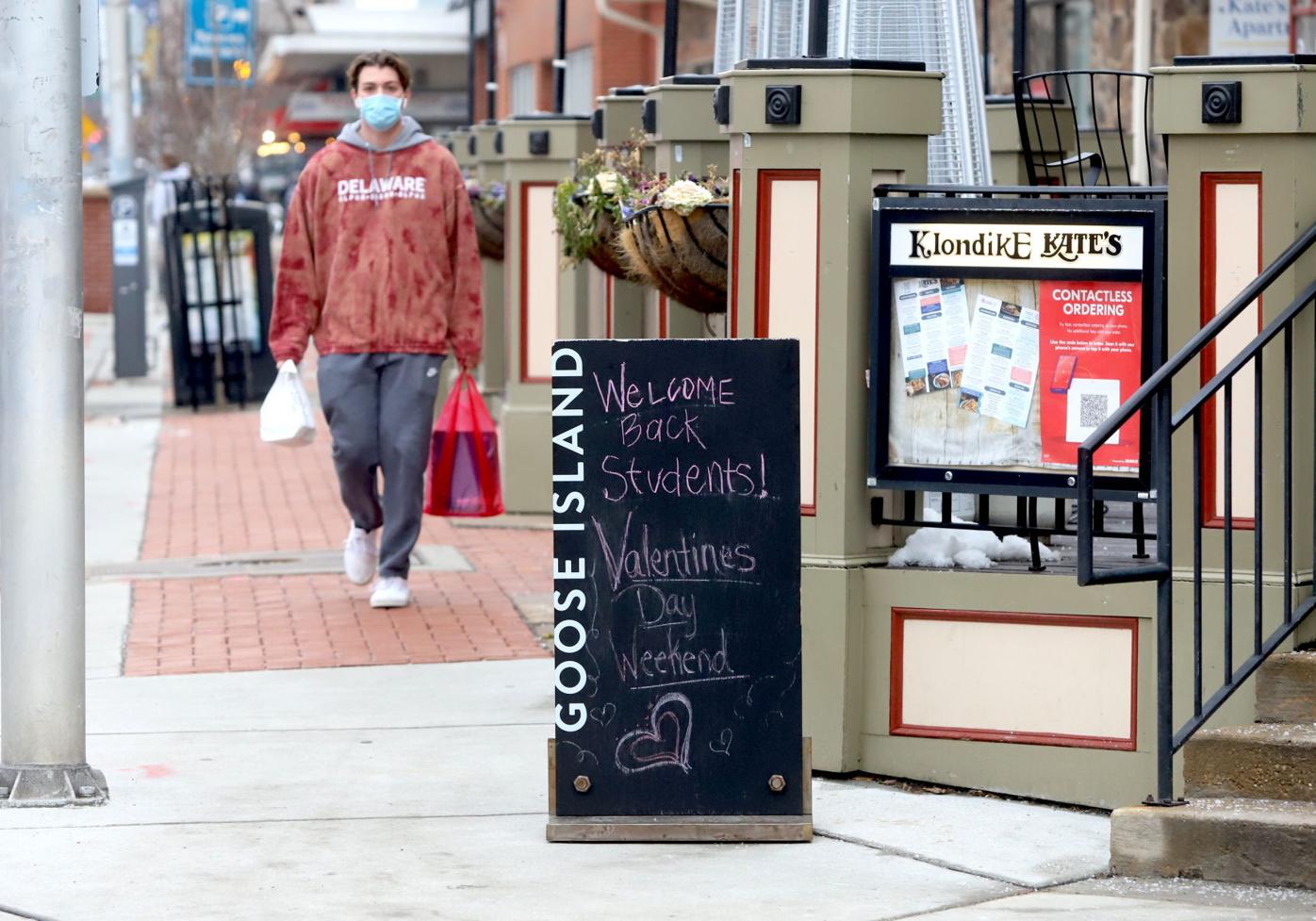 A sign outside Klondike Kate’s welcomes students back to Newark on Sunday, as Main Street bustled with students for the first time in several months. 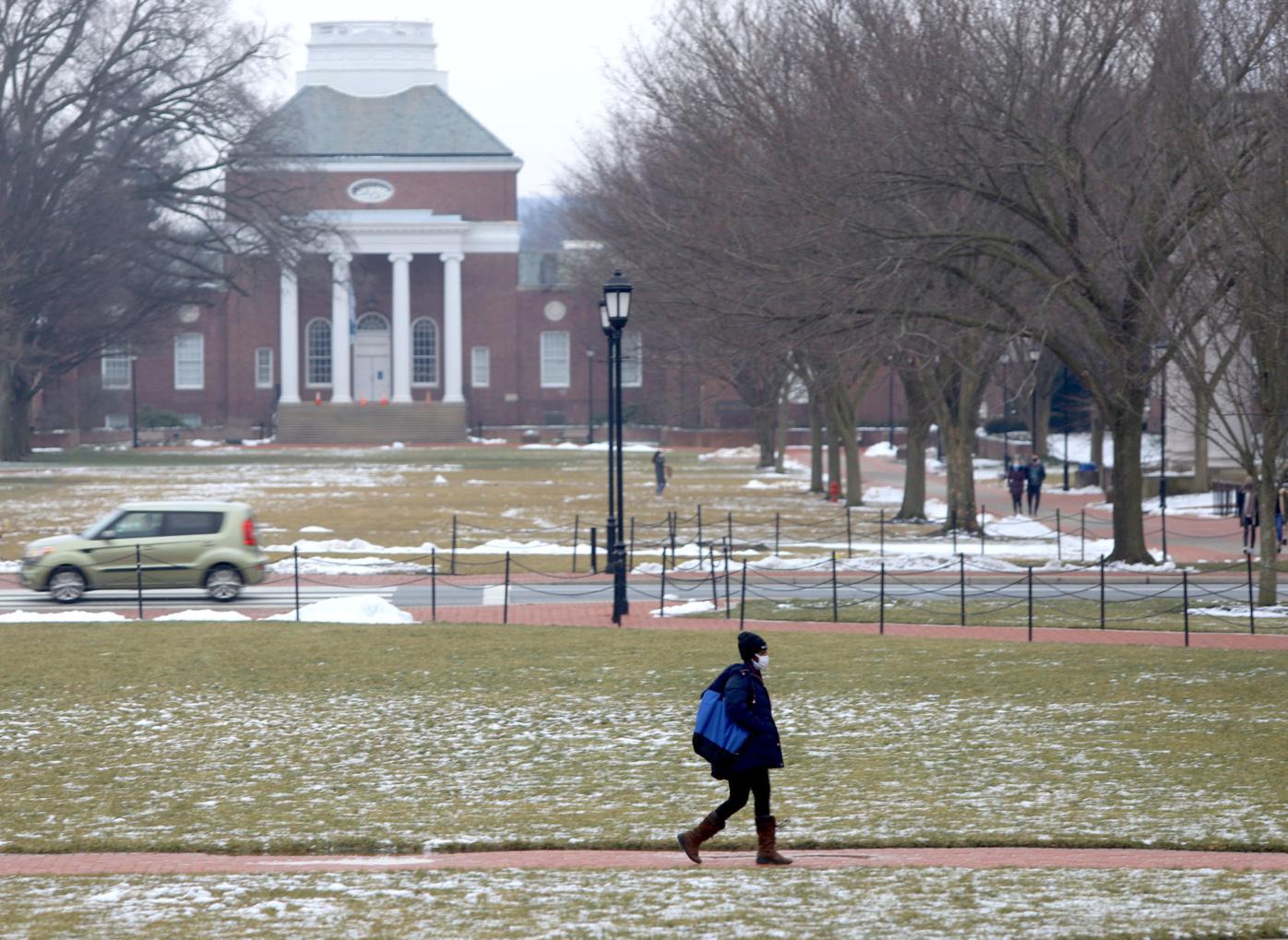 A masked pedestrian walks across the UD Green on a dreary afternoon Sunday. 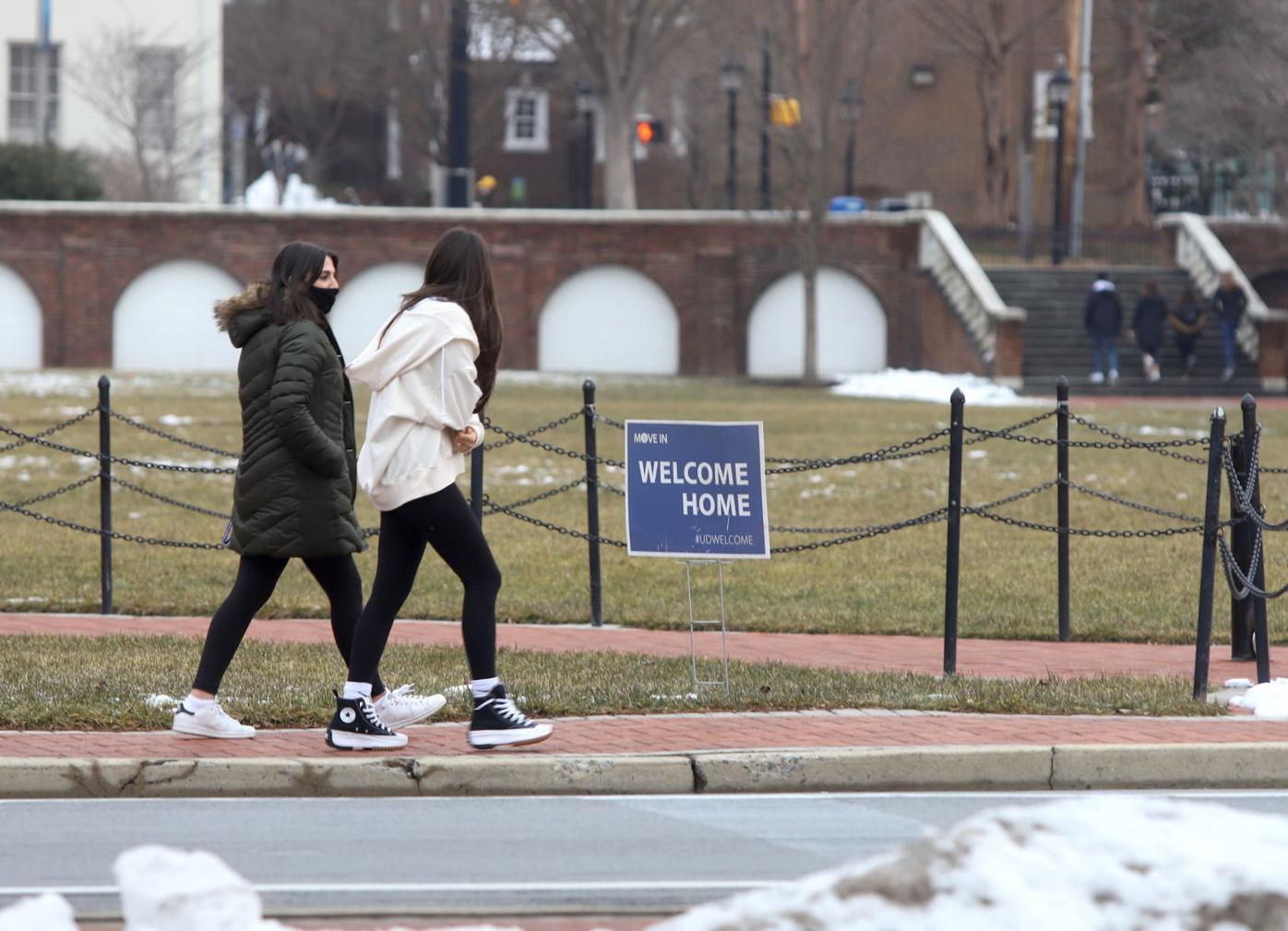 A sign on the UD Green near Delaware Avenue welcomes students back for the spring semester on Sunday. 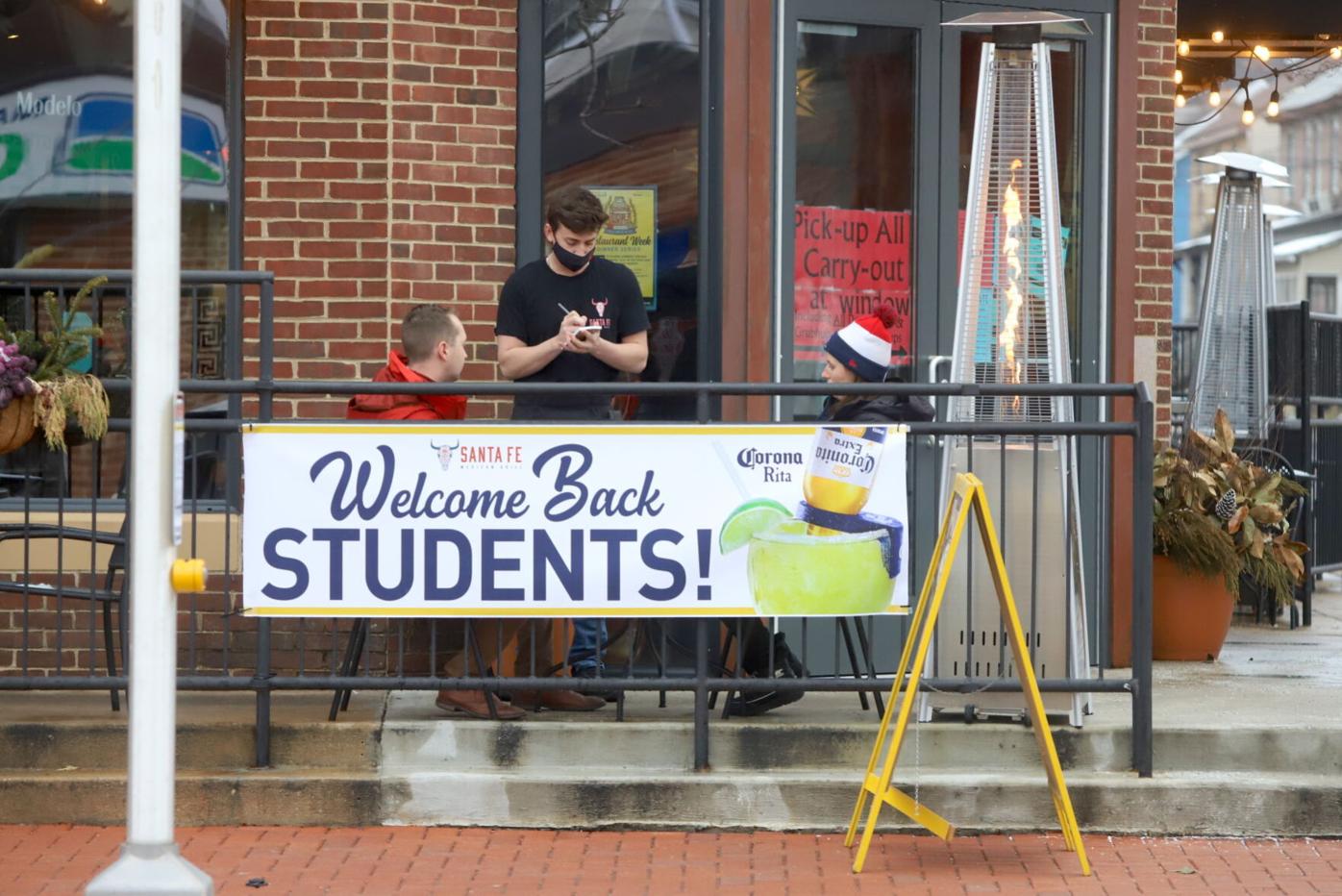 A sign outside Sante Fe Mexican Grill welcomes students back to Newark as a table of hardy diners brave temperatures in the 30s to eat outside Sunday afternoon.

A sign outside Klondike Kate’s welcomes students back to Newark on Sunday, as Main Street bustled with students for the first time in several months.

A masked pedestrian walks across the UD Green on a dreary afternoon Sunday.

A sign on the UD Green near Delaware Avenue welcomes students back for the spring semester on Sunday.

A sign outside Sante Fe Mexican Grill welcomes students back to Newark as a table of hardy diners brave temperatures in the 30s to eat outside Sunday afternoon.

The University of Delaware campus sprung to life again Monday, and The Green bustled with students heading to class or back to their dorms on a chilly, gray February day.

At the noontime class-change period, there was nowhere near the throngs of students that there would be in a normal year, but it was the closest thing to a crowd the campus has seen since the discovery of a COVID-19 case on campus March 11 sent students scrambling to leave town.

With the start of the spring semester, UD officials have met the goal they set months ago – a broader reopening of the campus than was possible in the fall.

It’s a decision that has major benefits for students seeking more normalcy, for the university’s financial situation and for the Newark businesses that rely on students. Still, there are a number of potential pitfalls – the pandemic is significantly worse than it was when the fall semester began, vaccines are likely months away for most students, and the threat of faster-spreading coronavirus variants looms.

“We have navigated this unprecedented pandemic together and we will come out on the other side stronger than before,” UD President Dennis Assanis wrote in a letter to students Monday. “As we begin the spring semester, I am certain that the UD community will again rise to the challenge of doing whatever is necessary to ensure we can resume the normal rhythms of campus life as soon as it is safe to do so.”

This spring, approximately 3,800 students are living in the dorms, which is 60 percent of normal occupancy but approximately triple the number from the fall, according to Caitlin Olsen, UD’s director of government relations. All rooms are single-occupancy.

There are likely also several thousand students living in off-campus apartments throughout Newark, but UD doesn’t release statistics on that.

Move-in was spaced out over five days, Feb. 10 to 14, to avoid families having to congregate in hallways and parking lots.

Olsen noted that many of the new arrivals are freshmen who started their college experience virtually and are now experiencing campus life for the first time.

“A lot of these students that are coming to campus may be new to Newark and new to campus because they didn’t get to come here in the fall. So if you see any wandering around with their lanyards and their IDs hanging on them, please, you know, direct them back to campus,” Olsen quipped last week as she updated city council on UD’s reopening plans.

This semester, 18 percent of courses feature an in-person component, up from 9 percent in the fall. However, those that are in-person will look different than usual.

“Many of you know or have seen our large, 400-person lecture halls. Envision that, but with only 50 people in the space,” Olsen said. “We want to make sure that everyone is spread out according to the current recommendations from the CDC and our local officials.”

It’s likely that Newark’s number of new daily coronavirus cases will increase, simply as a result of bringing thousands more people into town. However, city officials are hoping to avoid the large spikes in cases seen during the fall semester.

“We’re going to be really closely watching the city’s numbers as the students return to campus,” City Manager Tom Coleman said. “We had the spike over the fall, even though it was pretty much isolated to the student population, as there are these other variants, we really want to keep a lid on the case counts in town so it doesn’t escape from the youth and spread through the population.”

After getting the initial outbreak under control in the spring, Newark saw a relatively low number of infections throughout the summer, averaging less than one new case per day in late August. However, the numbers started increasing once many UD students returned in the fall and spiked even more after a spate of illegal Halloween parties among students – hitting a peak of 26 new cases per day shortly before Thanksgiving, when students left for winter break.

By early February, the city was down to an average of eight new cases per day, though that number started ticking up as students began returning to town.

Olsen said the university is taking strict measures to keep the virus in check on campus.

UD is significantly ramping up its coronavirus testing program and plans to test 6,000 students and employees each week, more than double the amount in the fall.

Under a new policy, all students living on campus are mandated to be tested once a week, and those who don’t comply could face sanctions. Students living off-campus are encouraged to get tested at least monthly and will be randomly chosen for mandatory testing.

In the fall, UD encouraged weekly testing but stopped short of requiring it because of questions regarding the legality of mandatory testing, according to the campus medical director. This semester, the testing mandate is part of the housing contract that all students sign in order to live in the dorms, a UD spokeswoman said.

Tests are analyzed at UD’s Allen Biotechnology Laboratory, which is located on the university’s farm and is typically used for poultry research.

Students, employees and visitors are required to complete a daily health questionnaire every day they are on campus.

Students were also required to take an online training course about coronavirus safety and answer quiz questions about how the virus spreads and coronavirus-related restrictions.

The training highlights Newark’s social gathering ordinance, which limits gatherings to no more than 10 people indoors or 20 people outdoors.

Police have cited more than 115 people with violating the ordinance since it was passed in late August. First-time offenders are fined between $100 and $500 and ordered to complete up to 20 hours of community service. Under UD policy, any student caught hosting a large gathering is immediately suspended.

The ordinance’s next big test will be St. Patrick’s Day, which is usually the biggest party weekend of the year.

UD has social distancing policies in the dorms, as well.

“They’re going to be very strict about guests and meandering around the halls in the dorms,” Olsen said. “There were far fewer students in the fall, but word is getting out pretty quickly what the consequences are if you do not follow rules regarding guests or too many people in your dorm room. That is going to be a lot stricter in the spring, just because there’s so many more students.”

She added that she expects students who weren’t in Newark for the fall will quickly learn about the city’s gathering restrictions.

“It will be interesting to see how quickly word spreads around that we’re not messing around,” she said.