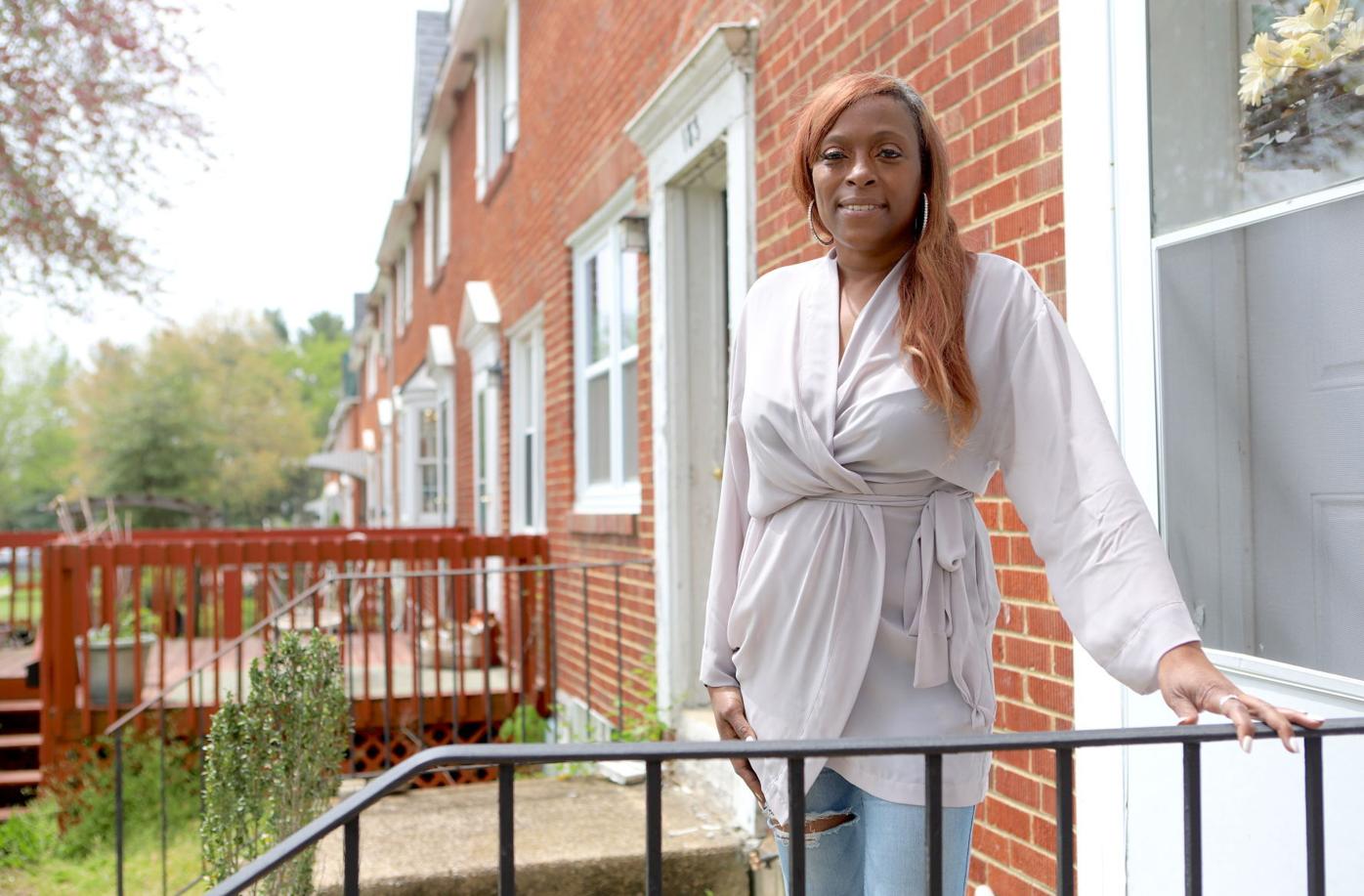 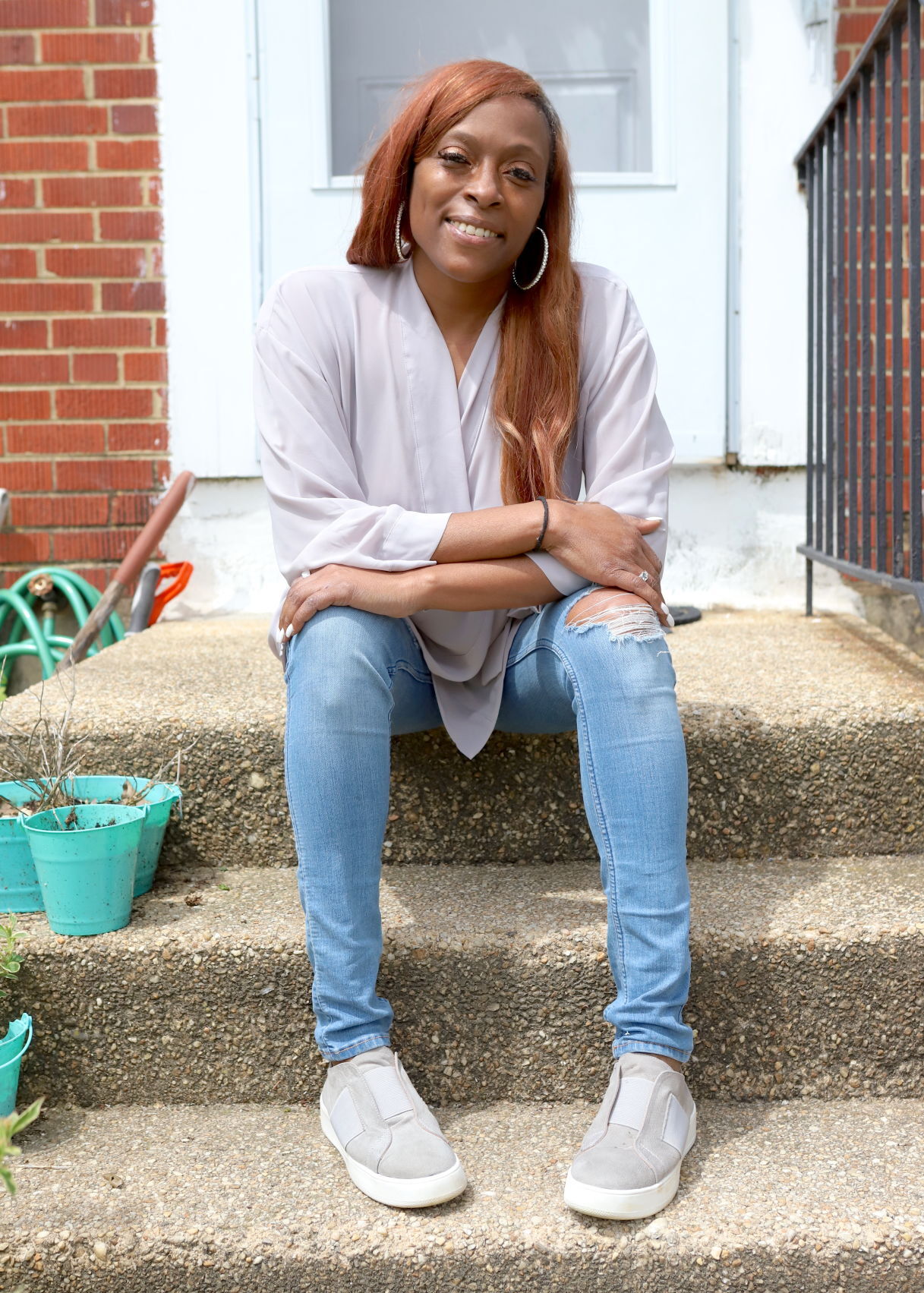 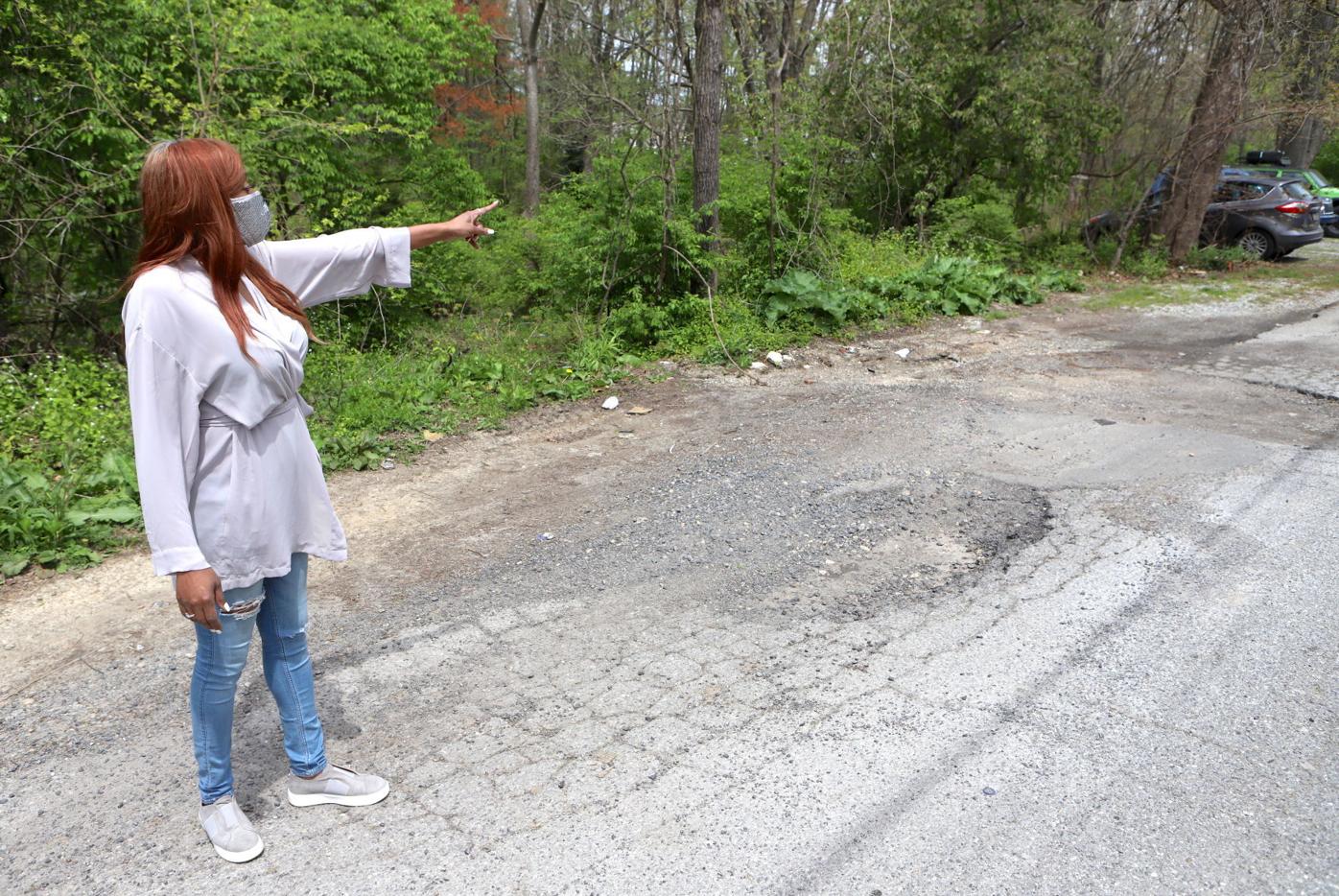 Newly elected Councilwoman Dwendolyn Creecy points out potholes in a service road that runs behind her Madison Drive home. 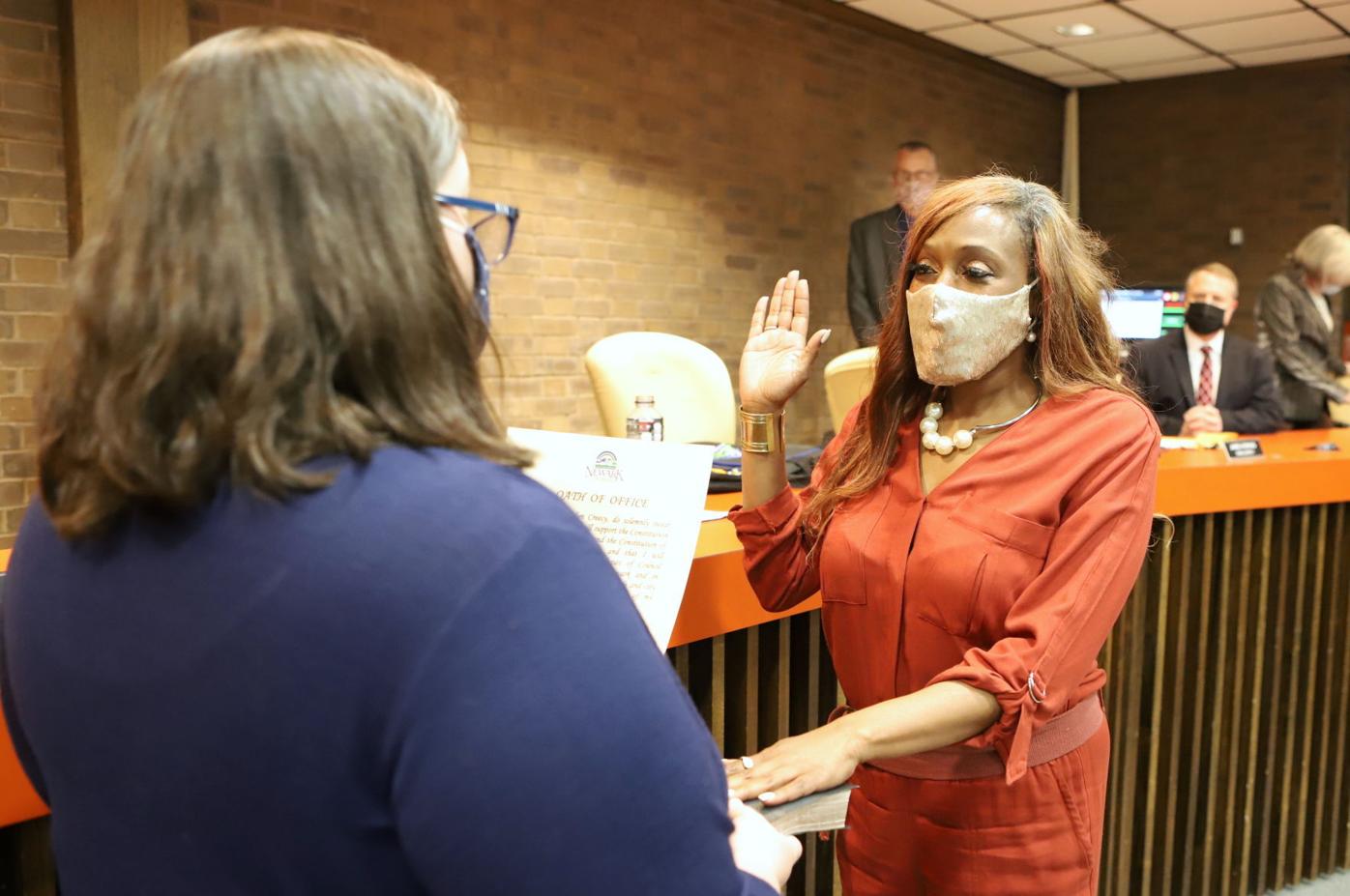 Newly elected Councilwoman Dwendolyn Creecy points out potholes in a service road that runs behind her Madison Drive home.

Walking along the service road that runs behind her Madison Drive house Saturday afternoon, Dwendolyn Creecy watched as a car swerved to avoid one of the massive potholes caused by garbage trucks and other heavy vehicles that use the road.

“I’m going to get that fixed,” she shouted to the driver, introducing herself as the neighborhood’s new city councilwoman.

Two days later, she brought up the issue during her first council meeting, prompting City Manager Tom Coleman to commit to examining options for repairing the road.

Creecy intends for that to be just the first of many times she uses her new position to advocate for College Park, the working-class neighborhood off Elkton Road that often gets a bad reputation.

“This little nook of an area right here has been slightly forgotten,” she said. “I want to bring voice to this area, and to my other constituents in other areas in District 4, and try to come up with some good compromise for the issues at hand.”

Creecy was sworn in last week to replace Councilman Chris Hamilton, who chose not to seek a third term. Creecy ran unopposed for the seat.

Creecy is the first council member from College Park since Orville Clark, who concluded his 10 years of service in 1987. The five district representatives since then have all lived in the more affluent Old Newark neighborhood.

Creecy’s election is historic for another reason as well. She is the first Black woman to serve on Newark’s council and only the second Black person to do so. The city’s first and only other Black council member was the local civil rights leader George Wilson, who served on council from 1958 to 1962.

“It felt amazing to break that glass ceiling,” Creecy said. “I’m overjoyed that the City of Newark put its trust in me. I have some huge shoes to fill since it's been since the 1950s to have some diversity in city government. I have to do all the years of catching up from George Wilson.”

She joins council as the city continues to talk about ways to diversify the government, a conversation that began last year after the killing of George Floyd in Minneapolis. In fact, the first ordinance she voted on as a council member was the last step in establishing a diversity and inclusion commission to advise council on equity issues.

Mayor Jerry Clifton called Creecy’s swearing in a “historic evening” for the city.

“It's nearly 70 years later before the second Black council person is serving and I suspect and I hope over the next years to come that we’ll get a much more diverse candidate pool who will want to run and serve on city council, not just the Black community, but other minority communities as well,” Clifton said. “This is truly a groundbreaking moment for Newark.”

‘I’ve been through a lot’

Creecy grew up in a rough neighborhood in West Philadelphia.

She recalled a time when she was 14 and found a baby who was turning blue while its parents were distracted doing crack cocaine. She grabbed the baby and, with help from her mother, was able to resuscitate the infant.

“That really hit me hard as a child,” Creecy said. “I’ve seen a lot and I've been through a lot.”

She credited her parents and extended family with keeping her on the right track.

“It took a lot of people to raise me,” she said. “My Aunt Robin, whose son I ended up taking care of after she was murdered, was a huge, huge factor in me not ever doing drugs. Had I not had the experience with her, who knows what I would be doing? But she embedded in me that I was bigger than that, and to never follow in her footsteps.”

Still, she faced challenges as a teen and young adult.

After a falling-out with her parents, she left home and was homeless at age 16.

“I know what it’s like to walk past a restaurant and you haven’t eaten in two days,” she said. “I’d stand there and smell the food, and it would take my hunger away.”

A few years later, she found herself in an abusive relationship and went to school to be a dental assistant in order to leave her abuser and create a new life for herself and her then-young daughter.

She later graduated from Temple University and she has spent 35 years as a dental assistant. She has also taught at Delaware Technical and Community College and Dawn Career Institute.

In addition, she helps her mother with a party decorating business and sings neo-soul and jazz music under the stage name Windy Skyy.

‘I have a heartbeat for this block’

Creecy moved to Delaware a decade ago to be closer to her parents, who now live in Bear. She said she instantly fell in love with the house on Madison Drive, partly because it is designed much like the house where she grew up.

However, that dream home quickly became a nightmare when a pipe burst, causing thousands of dollars in damage just months after she moved there in 2010.

She credits City Planner Mike Fortner and a city-run home improvement assistance program with helping her get the damage repaired. Her neighbors also pitched in, lending moral support, praying with her and helping her work through the finances.

“If it wasn't for my neighbors here, I wouldn't be here. I'm telling you, I wouldn't,” she said. “So I have a heartbeat for this block.”

Indeed, Creecy is a fierce defender of Madison Drive and College Park. To the people who might turn up their nose or write it off as a high-crime area, she urges them to take a closer look.

“Here on Madison, there are so many different facets of culture, religion, dialects and education on so many different levels,” she said, noting that the street has a cross-section of people from retirees to students to university professors.

“This block represents all of Delaware,” she added. “To represent this block and this area is to represent everyone because you have every facet of person here, and they’re good people.”

She acknowledged College Park has its share of problems but believes the neighborhood is improving. Part of that, she said, is due to initiatives by the Newark Police Department and local nonprofits to help the kids in the neighborhood. NPD’s Special Operations Unit has organized a number of outreach programs and events like community barbecues and backpack giveaways, and the Newark Parks and Recreation Department sponsors a free summer camp in Dickey Park, which is located inside the neighborhood.

As a councilwoman, she plans to work with NPD and Newark’s new chapter of the Police Athletic League to expand their outreach to at-risk kids in Newark, particularly College Park, by establishing a mentorship program and expanding facilities in Dickey Park to include a community room for kids to gather at after school.

‘I'm going to stand up to racial inequality’

While she has concerns about racial disparities in policing on a national level, Creecy said she is a strong supporter of NPD.

“I believe that the police department is doing as much as humanly possible to gain a connection to the people here in my district. They're trying their best; they realize fault. They are good people, and I support them 100 percent. If anything, the only thing I would like to do is to bring better understanding of minorities and people who cannot express themselves properly.”

Creecy said that while Newark has generally been a welcoming place, she and her now-grown children have experienced racism here. Her son was subjected to slurs while attending the University of Delaware, and she and her daughter have both been made to feel unwelcome at Main Street restaurants.

“I don't frequent Main Street at all because I'm so scared I'm going get that look again,” she said. “But hopefully, after all of this, I'll be able to visit in comfort, but it's kind of sad that I have to go up there and eat now and feel comforted only because I'm a councilwoman.”

She hopes to use her position to bridge any gaps in the community.

“I'm going to stand up to racial inequality if I see it in any way, shape or form, that's for sure,” she said. “But I always believe that there is an alternative to creating some kind of silent chaos. That I don't want. I'm pretty straightforward. There's no jack-in-the-box here. What you see is what you get.”

Her other goals include establishing regular community cleanups in her district, working to create understanding between renters and homeowners and addressing landlords who allow their properties to fall into disrepair.

Hamilton, who stepped down from council after four years, said he is confident Creecy will serve District 4 well, noting that she is already meeting with constituents and addressing issues in the community.

“She's really good with kids, and she's good with people,” Hamilton said. “I think she'll be able to continue that effort to bring a sense of community to that area."