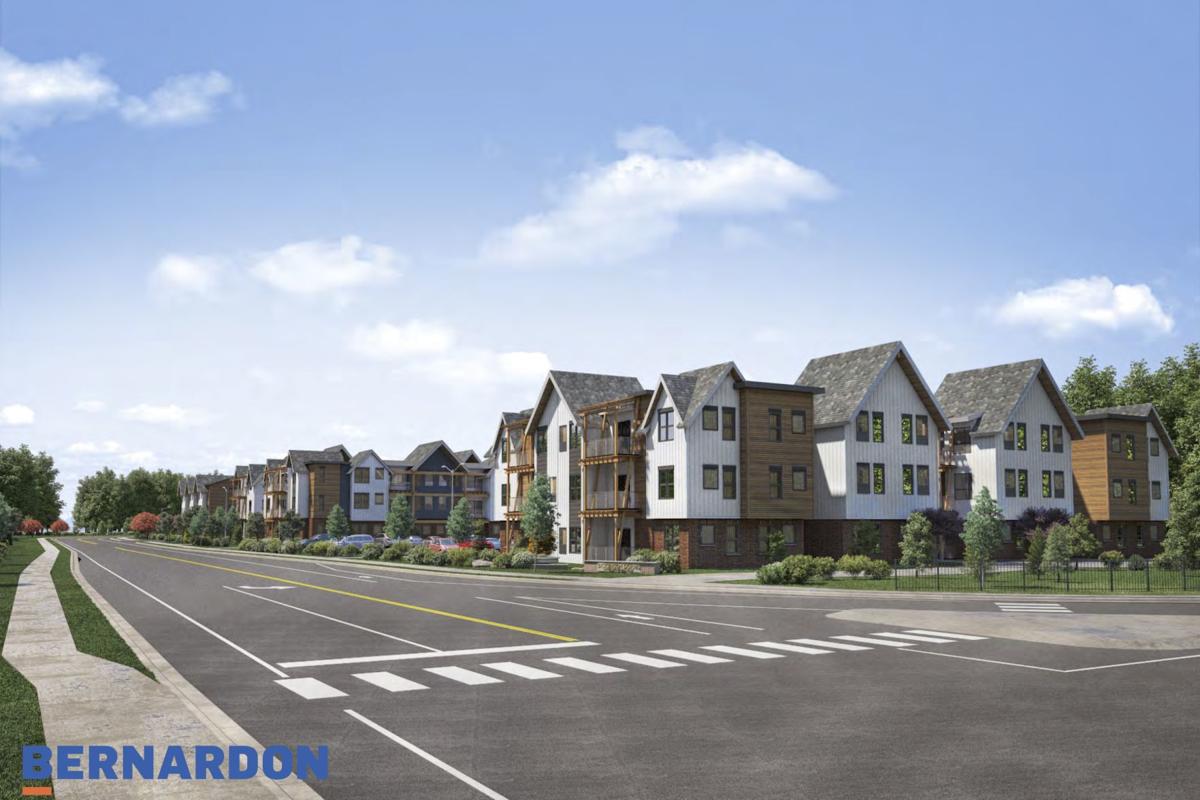 An artist’s rendering shows the apartments and townhouses planned for the Dickinson dorm site, as seen from the intersection of Hillside and Apple roads. 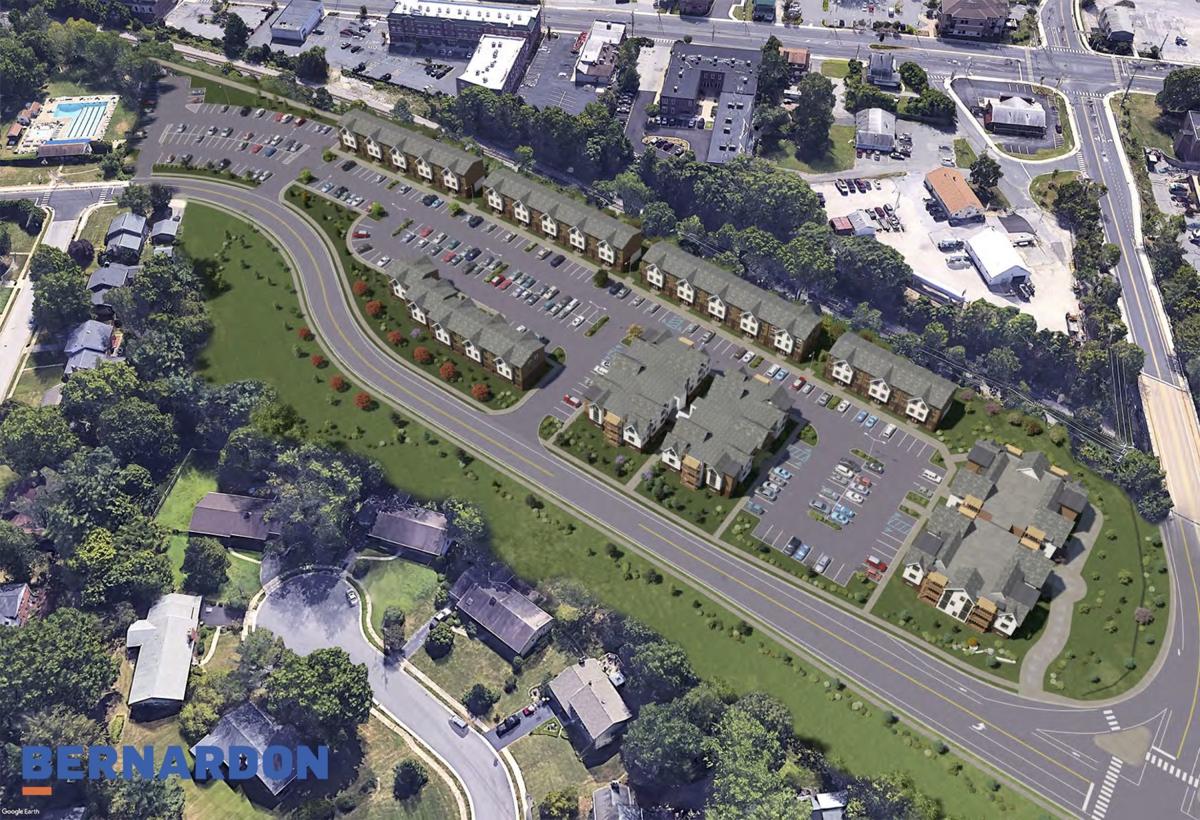 An artist’s rendering shows the apartments and townhouses planned for the Dickinson dorm site, as seen from above.

An artist’s rendering shows the apartments and townhouses planned for the Dickinson dorm site, as seen from the Oaklands neighborhood. 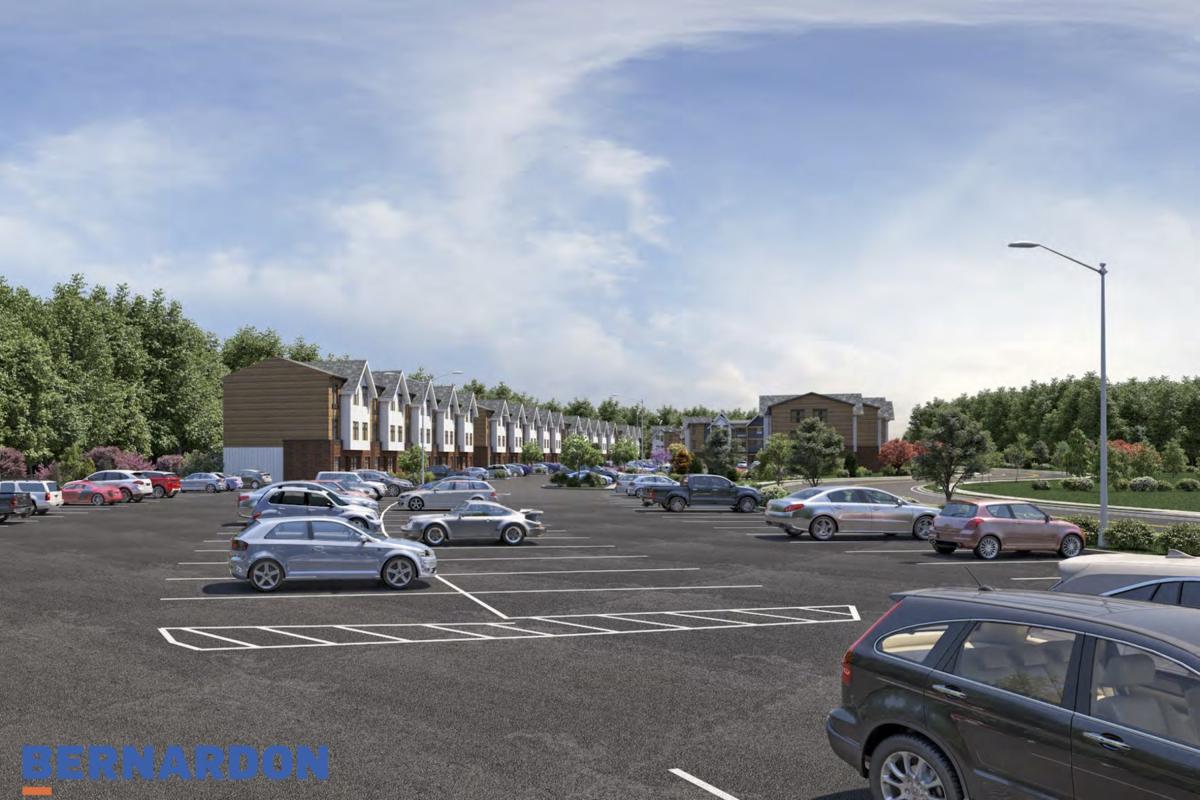 An artist’s rendering shows the apartments and townhouses planned for the Dickinson dorm site, as seen from Oaklands Swim Club.

An artist’s rendering shows the apartments and townhouses planned for the Dickinson dorm site, as seen from the intersection of Hillside and Apple roads.

An artist’s rendering shows the apartments and townhouses planned for the Dickinson dorm site, as seen from above.

An artist’s rendering shows the apartments and townhouses planned for the Dickinson dorm site, as seen from the Oaklands neighborhood.

An artist’s rendering shows the apartments and townhouses planned for the Dickinson dorm site, as seen from Oaklands Swim Club.

After more than a year of debate in the community, a developer has received approval to raze the shuttered Dickinson dorm complex and replace it with off-campus student housing.

Lacking any legal grounds to deny the code-compliant project, Newark City Council unanimously approved it – going against the recommendation of the planning commission, which had concerns about traffic, density and the lack of green space.

College Town Communities plan calls for 46 four-bedroom townhouses as well as 45 apartments spread between four three-story buildings. The $30 million project will contain a mix of two, three and four-bedroom units for a total of 320 beds – approximately half the capacity of Dickinson.

The property, located at the corner of Hillside and Apple roads, is currently zoned for university use, but under a little-known provision in city code, it will automatically convert to a zoning of garden apartments when the University of Delaware sells the land.

The project is considered a by-right plan, with no rezoning, variances or other code relief being sought.

City Solicitor Paul Bilodeau warned council that the Delaware Supreme Court has previously ruled that municipalities have little discretion when voting on code-compliant projects. All they can do is impose “reasonable conditions,” he explained.

Council did just that, adding a number of conditions aimed at addressing concerns from neighbors.

It required the developer to fund a city-monitored surveillance camera near the site, install an emergency callbox on the trail that runs to the Rodney underpass and refrain from renting extra parking spaces to non-residents. During demolition, results of air monitoring must be made public, and construction vehicles will be required to enter and exit via Apple Road, rather than traveling through residential areas.

At the urging of the adjacent Oaklands Swim Club, council also required safety upgrades to the portion of the parking lot the developer shares with the swim club.

First announced in July 2018, the Dickinson project has gone through three iterations. The initial plan called for 65 townhouses and 30 apartments. After meeting with community members, the developer eliminated the townhouses and proposed 10 four-story apartment buildings containing a total of 189 two-bedroom apartments, along with only half the parking required by city code.

Representatives of the developer said reducing the amount of parking would lessen the traffic impact on the surrounding neighborhoods, adding that tenants who don’t have a parking space in the lot could pay to store their vehicle at the UD athletic complex or rent a parking space elsewhere. They said that at their other student housing complexes in Pennsylvania, less than half the residents bring a car.

However, the developer later withdrew that plan, which had garnered strong opposition from Oaklands Swim Club, and instead proposed the code-compliant plan, which meets the parking requirement of 240 spaces.

Several members of council, however, said they wished they were voting on a plan with less parking.

“I actually despise this version,” Councilman Chris Hamilton said. “If I had my druthers, I’d have less parking and more open space.”

“I’m somewhat disappointed at the plan that is before us,” Wallace said. “I do think there were some better plans that would have suited the neighborhood better.”

Councilman Stu Markham noted that it was too late in the process to require less parking, but he encouraged the developer to consider petitioning the board of adjustment for permission to reduce the parking and replace it with additional green space.

During Monday’s meetings and in written comments submitted in advance, a number of residents of the nearby Oaklands neighborhood voiced concern about the project.

Adam Giansiracusa wrote that Hillside Road already has a lot of traffic, and the project will only make it worse.

“The proposed development is not good for the community,” Giansiracusa wrote. “It is simply out of step with the interests of the community to build structures on every available patch of land as they present themselves for development.”

Tom Eleuterio added that when students were housed in the Dickinson dorms, he often saw them strolling through his neighborhood, drinking alcohol, smoking marijuana and littering.

“The residents knew about this behavior and mostly tolerated this low-level nuisance. However, it was always clear that if a true problem developed, the city and university would take steps to respond,” Eleuterio wrote. “My concern about this development plan is that by essentially removing the university’s presence on the property, adding many additional motor vehicles and leaving little room for healthy meeting and recreational space, the city will be creating another location in town that will be dominated by the sometimes thoughtless behavior of students.”

Michael Hoffman, an attorney for College Town Communities, noted that his client has held two informal public meetings to garner feedback from neighbors.

In many cases, he added, different residents made contradictory requests. For instance, some requested less parking to reduce impervious surfaces and lessen the impact on traffic, while others requested more parking out of concern that students without parking spaces would store their cars in Oaklands.

“At the end of the day, divergent opinions are good. Discussion and debate is good, and we’ve heard that,” Hoffman said. “We’ve made modifications where we can make modifications, but we also understand that there is a debate on these issues and you’re not going to be able to address everything.”