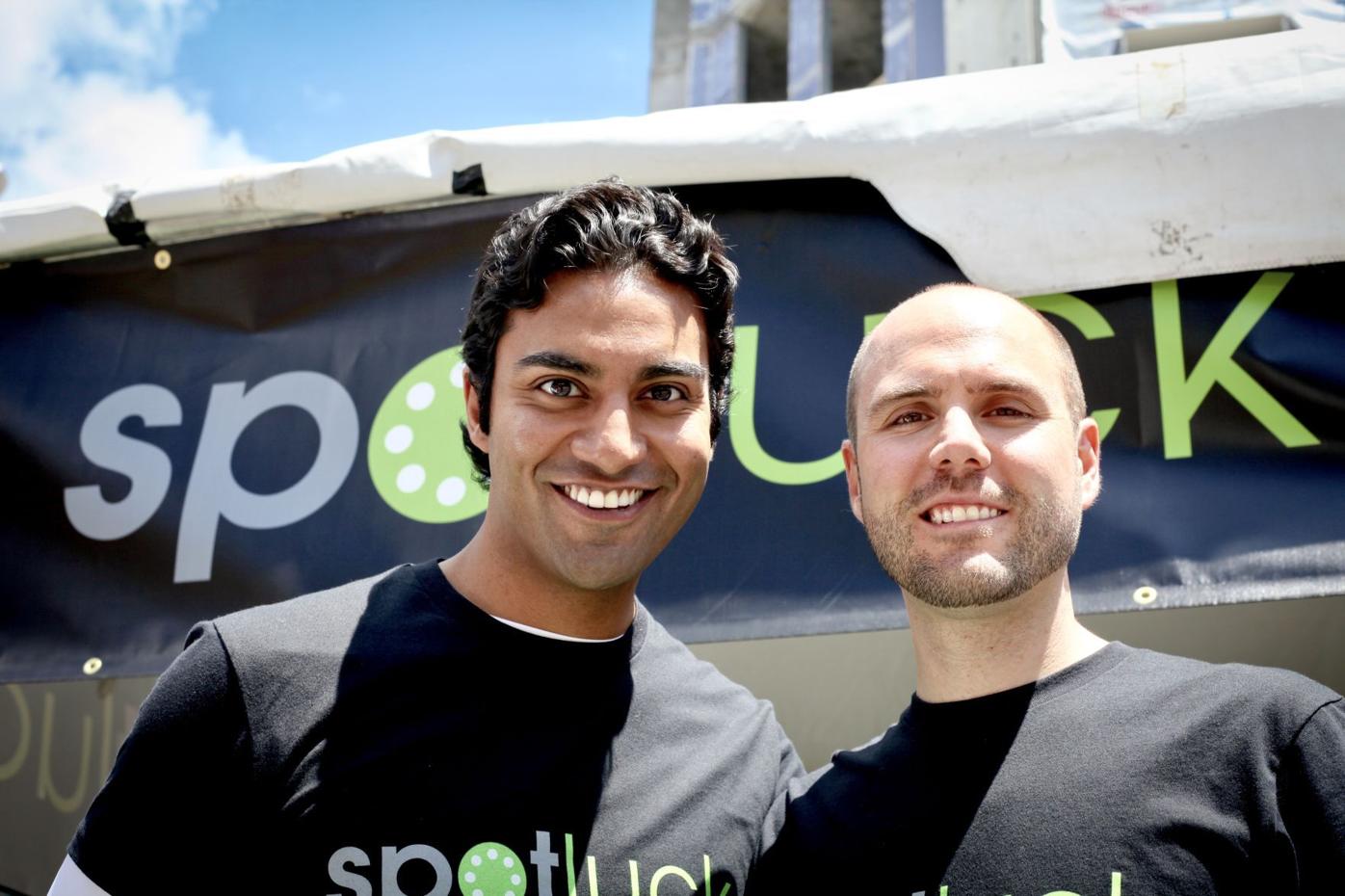 Cherian Thomas, left, and Brad Sayler founded Spotluck, a dining discount app, in 2014 and have grown the company to many large East Coast markets. 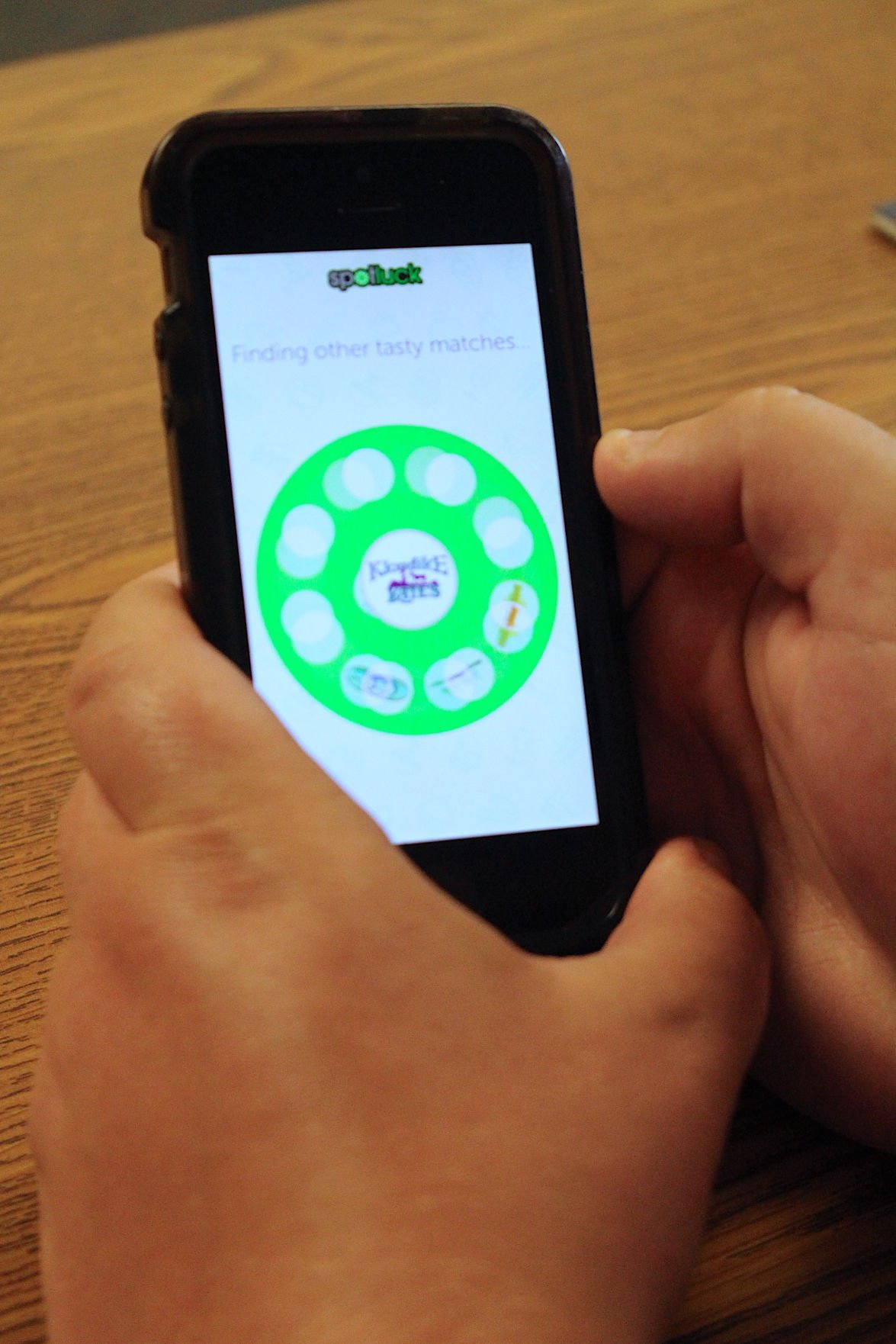 Spotluck, a new dining app with a dash of gaming, recently quietly launched in Newark. 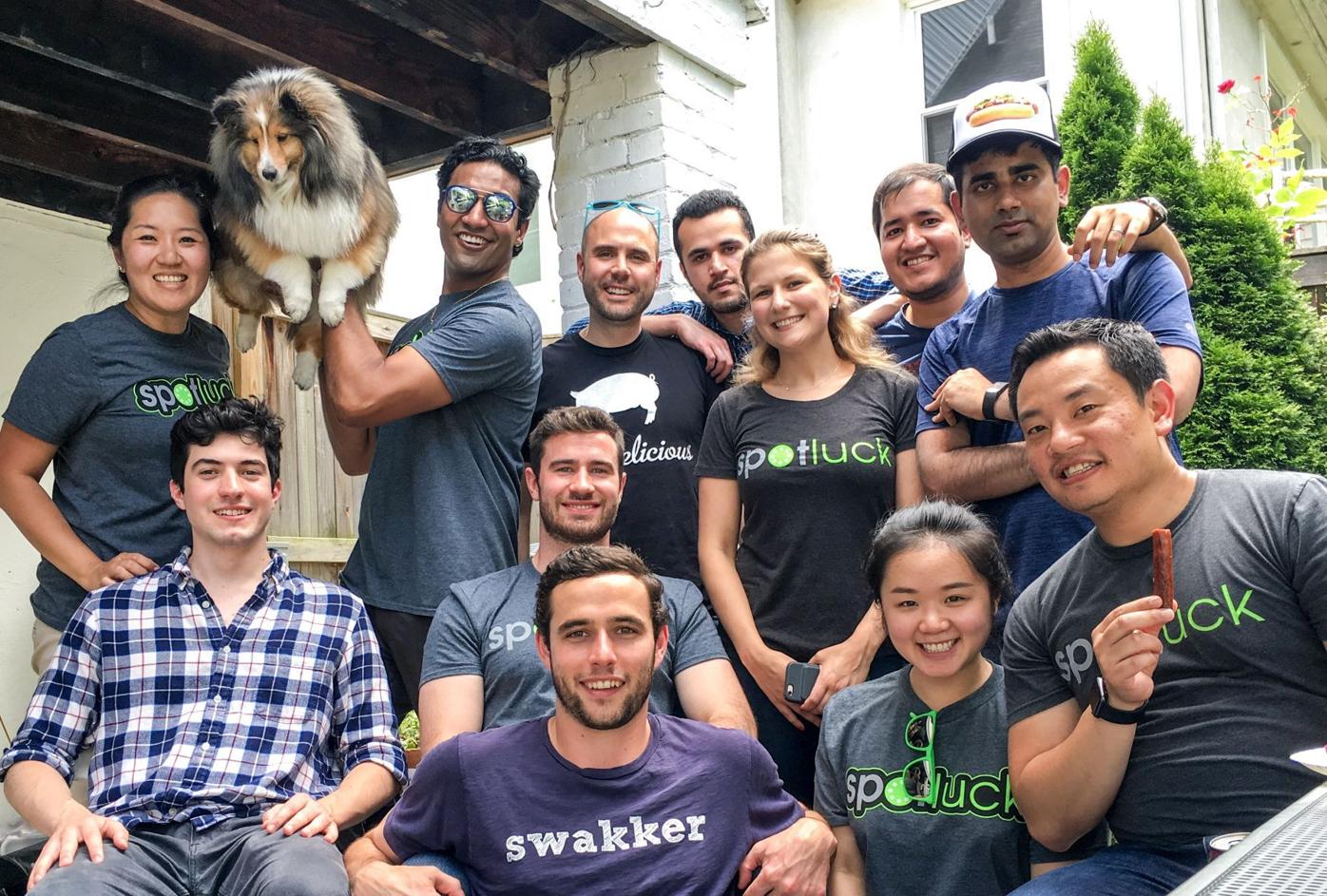 Spotluck, headquartered in Bethesda, Md., now has 20 employees and serves more than 1,200 restaurants. 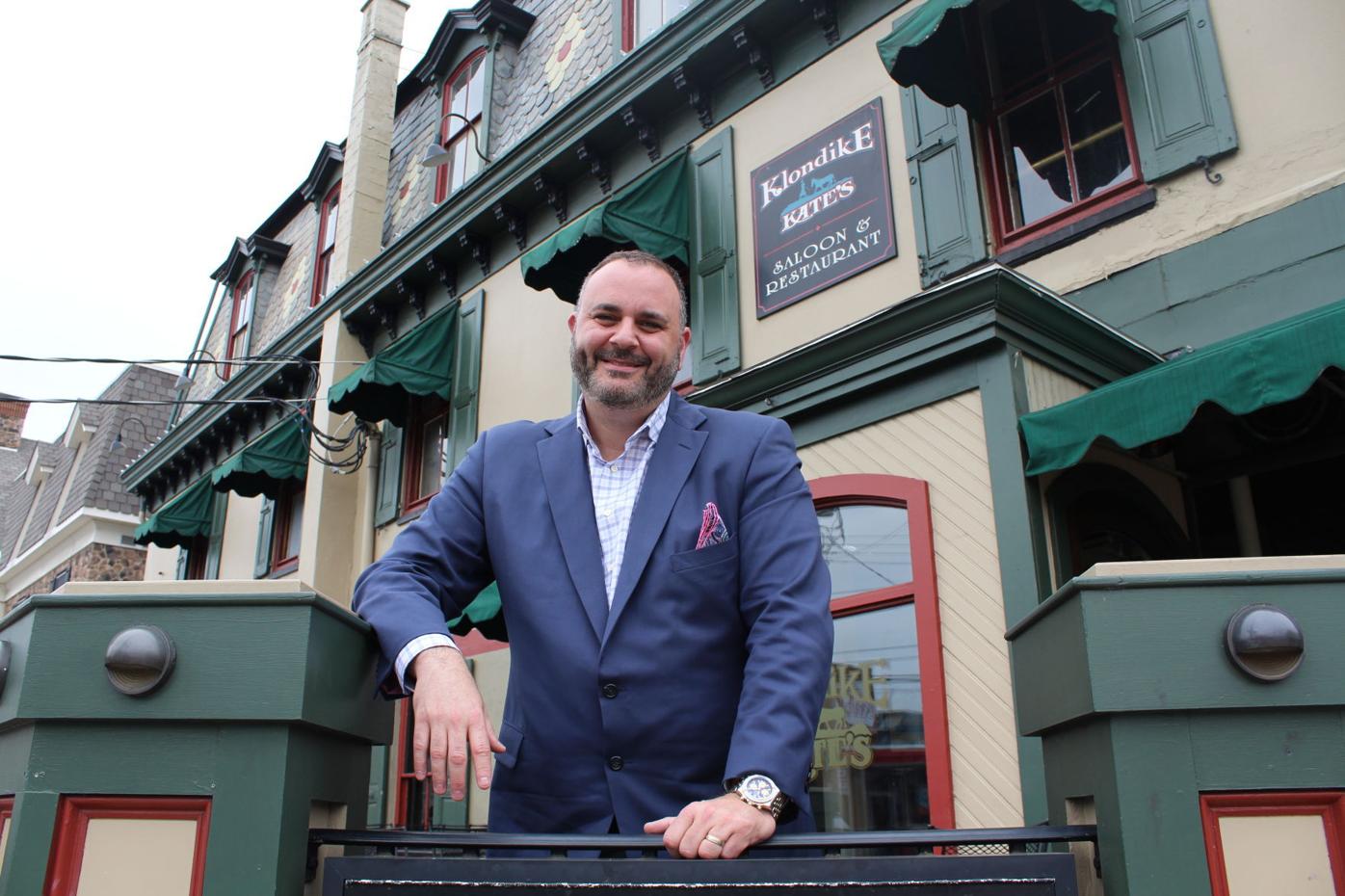 Gianmarco Martuscelli, owner of Klondike Kate’s, said Spotluck's ability to get a customer to dine-in was what convinced him to sign on to the new app service in Newark.

Cherian Thomas, left, and Brad Sayler founded Spotluck, a dining discount app, in 2014 and have grown the company to many large East Coast markets.

Spotluck, a new dining app with a dash of gaming, recently quietly launched in Newark.

Spotluck, headquartered in Bethesda, Md., now has 20 employees and serves more than 1,200 restaurants.

Gianmarco Martuscelli, owner of Klondike Kate’s, said Spotluck's ability to get a customer to dine-in was what convinced him to sign on to the new app service in Newark.

Cherian Thomas could notice a trend on the horizon: dynamic pricing was helping some of the internet age's biggest companies swallow up market share.

But he was troubled when some of those best practices weren't being applied to one of the most common choices that customers make: where to eat.

So about five years ago, Thomas, then a graduate student at Georgetown University, set out to develop an idea that would solve the dilemma. Two years later, he and a longtime friend Brad Sayler decided to invest all of their time and savings into the idea that became Spotluck, a mobile app that combines dining marketing with gamification.

Launched in June 2014, the Maryland-based company now has 20 employees, with Thomas serving as Spotluck's CEO and Sayler as its chief operating officer. It already partners with more than 1,200 restaurants in Philadelphia, Baltimore, Washington, D.C., New York City, New Jersey and parts of Virginia.

On Friday, Aug. 25, it quietly launched in Newark after rolling out in Wilmington in July. The app quickly found a foothold in the First State, drawing 5,000 users in Delaware in its first two months, of which about 90 percent have been verified as using the app, Thomas said.

The app's approach is simple: users identify what kind of food they want, spin a wheel on their smartphone and Spotluck will offer a random discount between 10 and 35 percent to a partnering independent restaurant in the user's local market. Spinning the wheel on a weekday or day with poor weather will likely yield a higher discount. The user then has 24 hours to take the discount to the restaurant to receive savings worth up to $50.

“We truly believe dining should be fun, it should be a game,” Thomas said. “You shouldn't spend 15 minutes arguing over where to eat, but rather 15 seconds find a place and enjoying it, while saving some dollars.”

Spotluck's “gamification” is what amplifies the user base, according to Thomas, who notes that dynamic pricing is nothing new. Independent restaurants have long boasted half-price burger and appetizer nights, but if a customers haven't come in the door to see that special, they often don't know about it like they might with a chain's specials.

“It boiled down to a business problem: businesses have trouble being seen and getting butts in seats, and they have fixed costs regardless of whether the weather was beautiful or terrible all month,” Thomas said.

Thomas said the company prides itself on the fact that while it has a presence in the East Coast's largest metro markets, it has also grown in smaller cities like Harrisonburg and Richmond in Virginia, Frederick in Maryland, and more.

“When you're not competing with 20 other food apps and thousands of other apps spending money to get in front of somebody it's easier to get noticed,” Sayler added. “One unique challenge has been college campuses.”

Spotluck's first large college campus was University of Maryland, College Park, which launched in January 2015. It's since rolled out in several metro markets that serve campuses like Georgetown University, Virginia Tech, University of Pennsylvania, Drexel University and many more. The company is aiming to replicate its original efforts from UMD in Newark, however, where the University of Delaware provides the largest percentage of potential users.

“We want to let people know about these great restaurants and the best way to do that is not to knock on doors in a cul-de-sac, but target high-density areas which often serve a college campus,” Thomas said.

As a UD graduate, Sayler said that he used some of the other local dining rewards programs, but he didn't feel they provided enough value or made choosing dining much easier. He notes that several of the other apps in the market, such as GrubHub or Hungry Hens, are more tailored to delivery service, and he doesn't think they'll compete heavily with Spotluck's appeal, which forces users to sit down in a restaurant.

The co-founders said the backbone of the company is it championing of independent restaurants, evidenced by its strict requirement that a restaurant be local or locally-owned.

“Users don't want to spin a wheel and land on Burger King, they want to know where the locals eat,” Thomas said. “We want to nudge people to venture out.”

Its support of business owners extends to data provided to them on users, GPS-verified reviews and fair discounts — Spotluck's savings max out at 35 percent. On its end, Spotluck charges a fee to restaurants to sign up to the service and it charges a small fee for each diner who shows up to a restaurant to use a discount.

“In Newark, we're eying about 10 to 15 restaurants,” Thomas said. “As a data company, we know that a lot of our Wilmington customers are coming from the Newark area.”

Sayler said his knowledge of Newark from his time at UD has helped the company identify targeted restaurants, although he admits Main Street looks a bit different than when he graduated in 2004.

“The Stone Balloon was a great place to go watch music and get some drinks, and obviously it's gone through some changes since then and reopened,” he said. “Getting Klondike Kate's on board was exciting for me, along with Margherita's Pizza and Home Grown, so I'm definitely going back to my college days.”

For Gianmarco Martuscelli, owner of both Klondike Kate's and La Casa Pasta, the concept of Spotluck's preferred pricing was what caught his attention and convinced him to sign on.

“It's something that I think will appeal to a younger customer who may be more sporadic with their dining choices,” he said, adding he didn't mind paying the finder's fee for diners. “If they don't choose your establishment, then you're not making any profit.”

Martuscelli, who runs a frequent diner program for his restaurants, said he sees Spotluck as “something completely new in the way it works for a restaurants.”

“You're not paying out of pocket until a customer buys a meal, which is good for our end,” he said. “They're doing a lot of marketing themselves, which also helps spread the word on our restaurants.”

While it's just getting underway in Newark, Thomas said the growth of Spotluck in Delaware may not be done as the company is still eying a possible expansion to the Delaware beaches.

“With beach season coming to an end soon, we want to fill a need,” he said. “We're getting a lot of inquiries, and actually quite a few have signed up already because they share ownership with a restaurant in one of our other markets.”

To suggest a restaurant to be added to Spotluck or find out more about the service, email contact@spotluck.com. For new users, sign up with promo code POST to receive an extra Spotluck savings during the Newark soft launch.

When our family is hungry, we want to eat. We don't want to play a game "Wheel of mis-Fortune. We eat within our budget, and don't spend a fortune. We have our hangouts, the food is good. And at our house, app stands for appetite, not gaming.