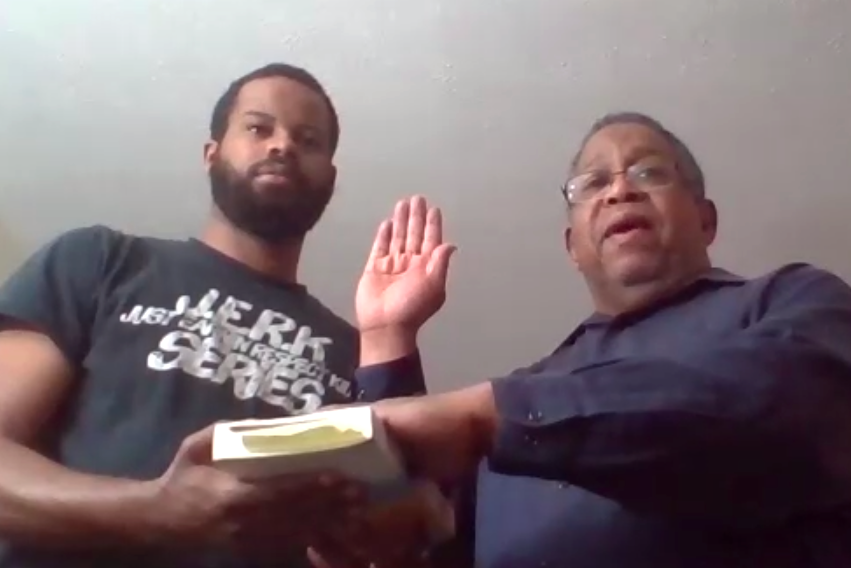 New school board member Warren Howell is sworn in via Zoom as his son James holds a Bible.

The Christina School Board has two new faces, after one new member was sworn in last week and another was appointed.

The board is now up to its full strength after choosing replacements for members Elizabeth Paige and Angela Mitchell, who both resigned earlier this year.

On May 12, Warren Howell, who the board chose from a field of three applicants, was sworn in during a meeting conducted through Zoom. Howell is a retired Marine who had a career in IT and now works as the parent and community engagement coordinator at Delcastle Technical High School, which is not part of Christina.

Later in that meeting, the board interviewed two applicants for the second vacant seat and ultimately selected Monica Moriak to fill the seat.

Warren and Moriak will both serve for about a year, and then the seats will be up for election in May 2021.

“I’ve always been a big proponent of the Christina School District. I think it’s a fabulous school district. The schools are fabulous; you just have to walk into them and recognize all that,” Moriak said. “I’m looking forward to working with people in the district on whatever challenges are ahead and being part of the solution.”

Moriak is no stranger to Christina, having served in PTA and other volunteer roles since 2003.

Both her kids attended Wilson Elementary, and one went to Shue-Medill Middle, before leaving the district to go to Salesianum for high school, she said, noting she wanted her kids to have a Catholic high school experience.

Still, Moriak remained active in the district. She has served on the Citizen Budget Oversight Committee for several years and is part of the referendum steering committee. She mentors two students and teaches Junior Achievement at Wilson.

Moriak first sought a school board seat in 2017, when she lost to Mitchell in a four-way race.

Last week, the board unanimously appointed her to the seat, choosing her over the other applicant, John Lynch, who served 34 years on the New Castle County Vo-Tech School District board.