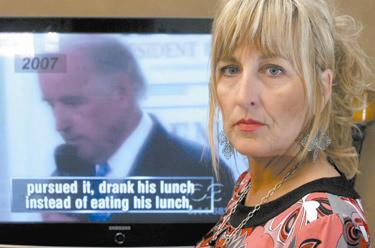 Newark resident Pamela Hamill wants an apology from U.S. Senator Biden (D-Del.) for his recent characterization of her father as having been drunk during the 1972 accident that killed the Senator's wife and daughter. 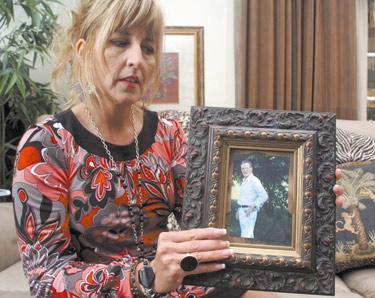 Hamill holds up a picture of her father, Curtis C. Dunn, who died in 1999. According to the judge who oversaw the 1972 police investigation into the accident says there is no evidence that alcohol was was a factor in the accident.

Newark resident Pamela Hamill wants an apology from U.S. Senator Biden (D-Del.) for his recent characterization of her father as having been drunk during the 1972 accident that killed the Senator's wife and daughter.

Hamill holds up a picture of her father, Curtis C. Dunn, who died in 1999. According to the judge who oversaw the 1972 police investigation into the accident says there is no evidence that alcohol was was a factor in the accident.

This article, which was published in 2008, has received a new round of attention during Biden's 2020 presidential campaign. Since the article was published, Biden has apologized to Pamela Hamill, she told Politico in 2019. “He apologized for hurting my family in any way,” Hamill said. “So we accepted that—and kind of end of story from there.”

Dunn was the tractor-trailer driver involved in the December 1972 accident that took the life of the newly-elected U.S. Senator’s first wife, Neilia, and 13-month-old daughter, Naomi.

Dunn died in 1999, but his daughter says she’s fed up with Biden publicly mischaracterizing him as having been drunk when the accident occurred.

According to Delaware Superior Court Judge Jerome O. Herlihy, who oversaw the police investigation 36 years ago as chief prosecutor, there is no evidence supporting Biden’s claim.

“The rumor about alcohol being involved by either party, especially the truck driver (Dunn), is incorrect,” Herlihy said recently.

Police determined that Biden’s first wife drove into the path of Dunn’s tractor-trailer, possibly because her head was turned and she didn’t see the oncoming truck.

Dunn, who overturned his rig while swerving to avoid a collision, ran to the wrecked car and was the first to render assistance.

Police filed no charges against Dunn, who at that time lived in North East, Md. with his wife, Ruby, and their seven children.

Biden has been alluding to alcohol being involved in the crash for nearly a decade. During a speech in 2001, Biden told an audience at University of Delaware that a drunken driver crashed into his family.

He told a similar story during a public appearance in 2007.

More recently, the vice presidential candidate’s misrepresentation of Dunn has found its way into major newspapers, including the New York Times.

It also has been repeated on radio and on television by major news journalists, including CBS anchorwoman Katie Couric.

Yet Hamill said she had no idea Biden had been misrepresenting Dunn until late August.

That’s when “Inside Edition” producers requested an interview with Hamill after the television show’s reporters had gathered evidence contradicting Biden’s story.

Hamill says she defended Biden at first, believing that, perhaps, his words had been misconstrued.

But her disbelief turned to anguish when shown a video of Biden making his unfounded assertion during a public appearance.

“I just burst into tears,” Hamill said. “The story already is tragic enough, why did he have to sensationalize it by saying my father was drunk? My family is outraged.”

Hamill appeared on “Inside Edition” on Sept. 18 to set the record straight and now, acting as family spokesperson, she is campaigning for Biden to recant his story and restore her father’s honor.

On Oct. 1, after several attempts to make contact, Hamill sent a registered letter to Biden’s camp, asking him to tell the truth.

As of Sunday, Hamill hadn’t heard from Biden’s camp.

In an Oct. 21 e-mail, a CBS spokesman acknowledged discrepancies in Biden’s story and explained that he’s awaiting word from the “news people.”

Hamill said learning about Biden’s false portrayal of her late father has chilled warm feelings that she once held for the senator.

In 2001, she wrote a heartfelt letter to Biden expressing her father’s profound grief after hearing Biden make a post Sept. 11 speech in which he told the audience that, given his history, he could empathize with victims.

“Growing up, my dad never talked about it. He always got very solemn around Christmastime because the anniversary was Dec. 18, and he never wanted to celebrate the holidays,” Hamill said. “When newspapers had anniversary articles (about the crash), we hid them from dad.”

Biden responded in a handwritten note, which, in part, reads, “All that I can say is I am sorry for all of us and please know that neither I or my sons feel any animosity whatsoever.”

Hamill says that because she fondly recalled those tender correspondences, the revelation of Biden’s distorted story is even more overwhelming.

“We always felt like our heartstrings were attached to (Biden’s) heartstrings. Now we feel stabbed in the back,” she said.

Hamill wants to clear her late father’s name before Biden’s story is even more widely accepted as fact.

“Suppose he becomes the next vice president,” she said. “Movies could be made about him and books could be written about him, all falsely portraying my father as a drunk driver. We need to set the record straight and clear my father’s name right now before this goes any further.”

I met Biden when I was in high school and I got the same sob story that a man who was driving drunk hit his wife and kids and she died because of his actions. My sons father had his current wife in a college classroom and she told the same story about a drunk driver killing his wife. He is such a lier. Thank you for printing the true story. I am sorry it took so long for me to find out the truth.

Don't hold your breath waiting.... Joe Biden is all about Joe Biden! The best thing about the election last week is that DE finally gets rid of "good ole Joe". We can only hope that Markell doesn't appoint one of his sons as a replacement!!!

Biden supposedly, according to him, has a high IQ, but he seems to be unable to tell the truth, and makes up facts to fit the moment. The Press lets him get away with this, hopefully a lawsuit will get Biden, and his lies the kind of attention that they deserve!

Plagiarist Joe is the perfect Democrat, able to lie at a moment's notice and milk the sympathy vote for all it's worth. It's high time that Curtis Dunn's survivors sued the scumbag for defaming the memory of an innocent man.