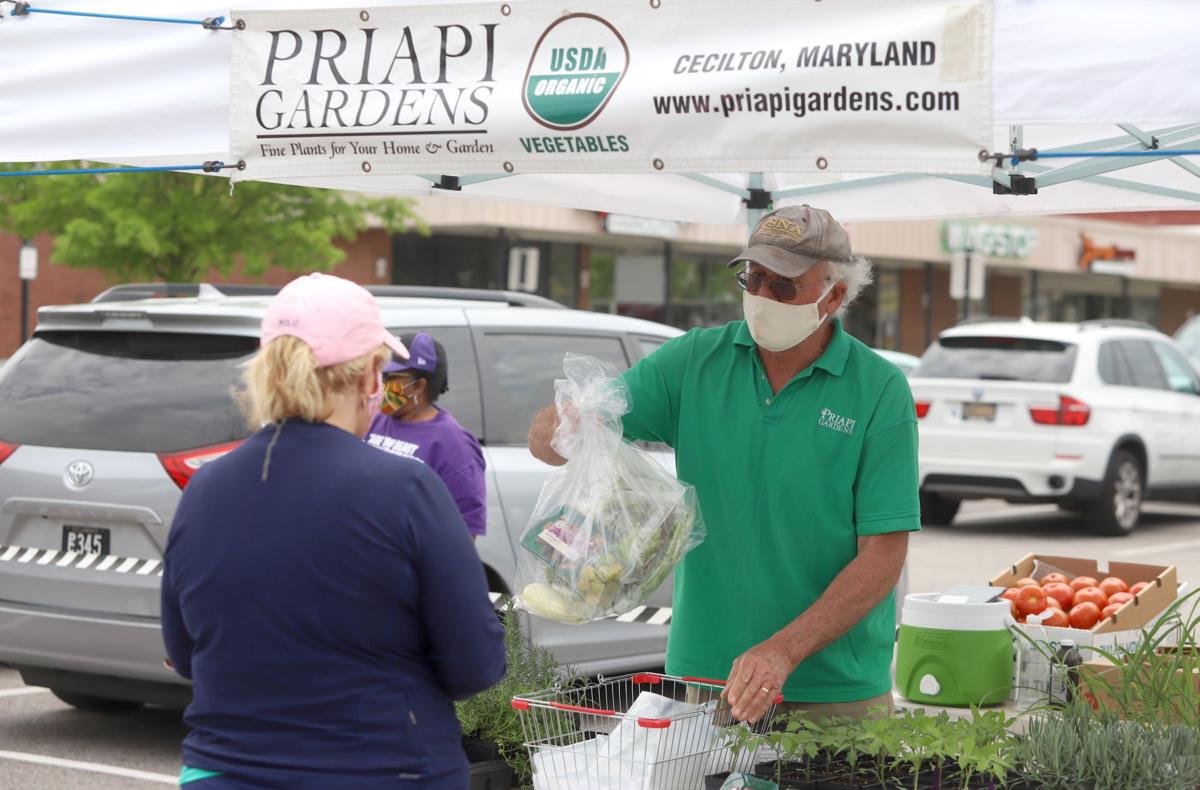 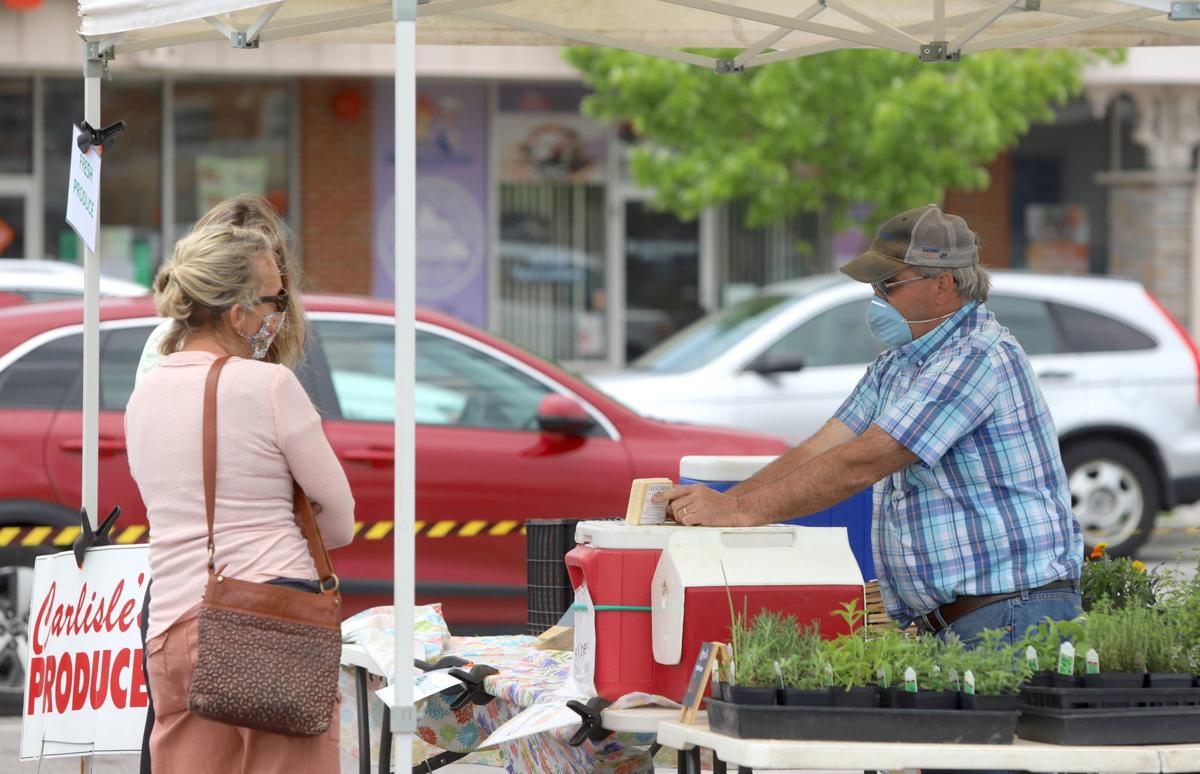 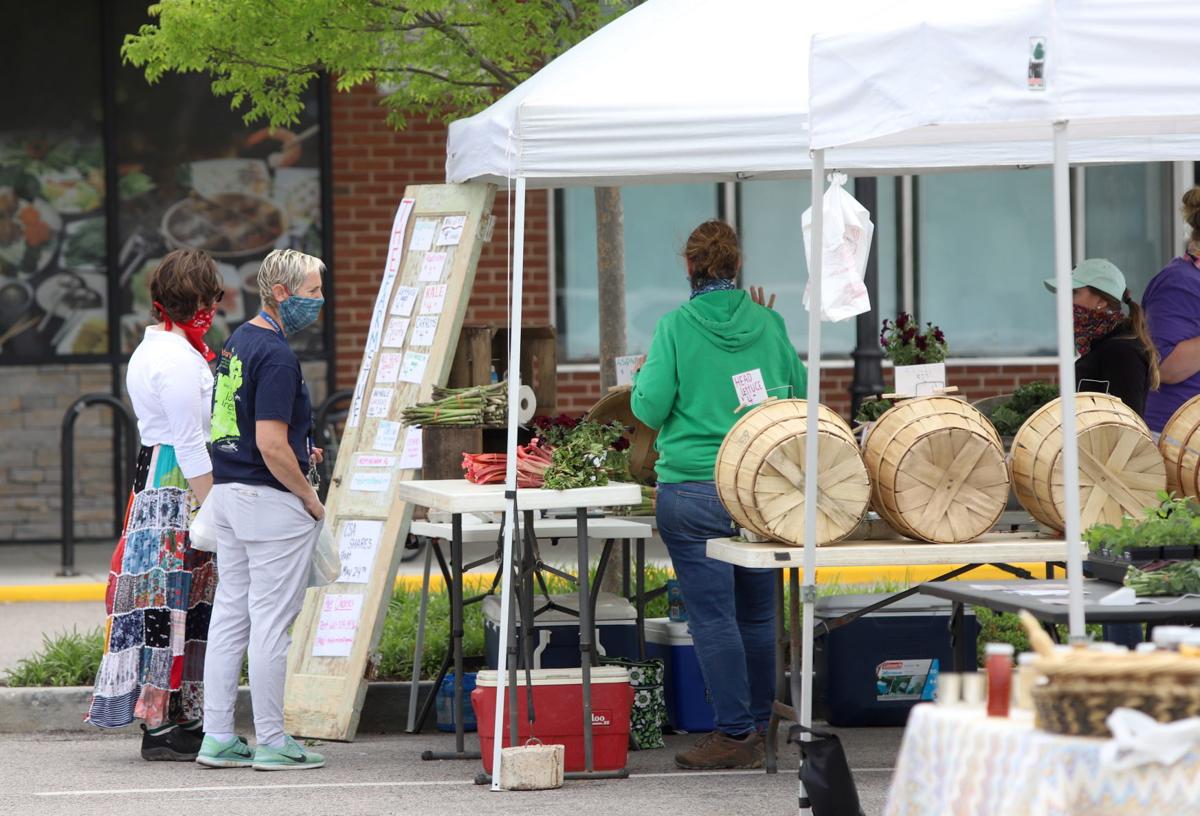 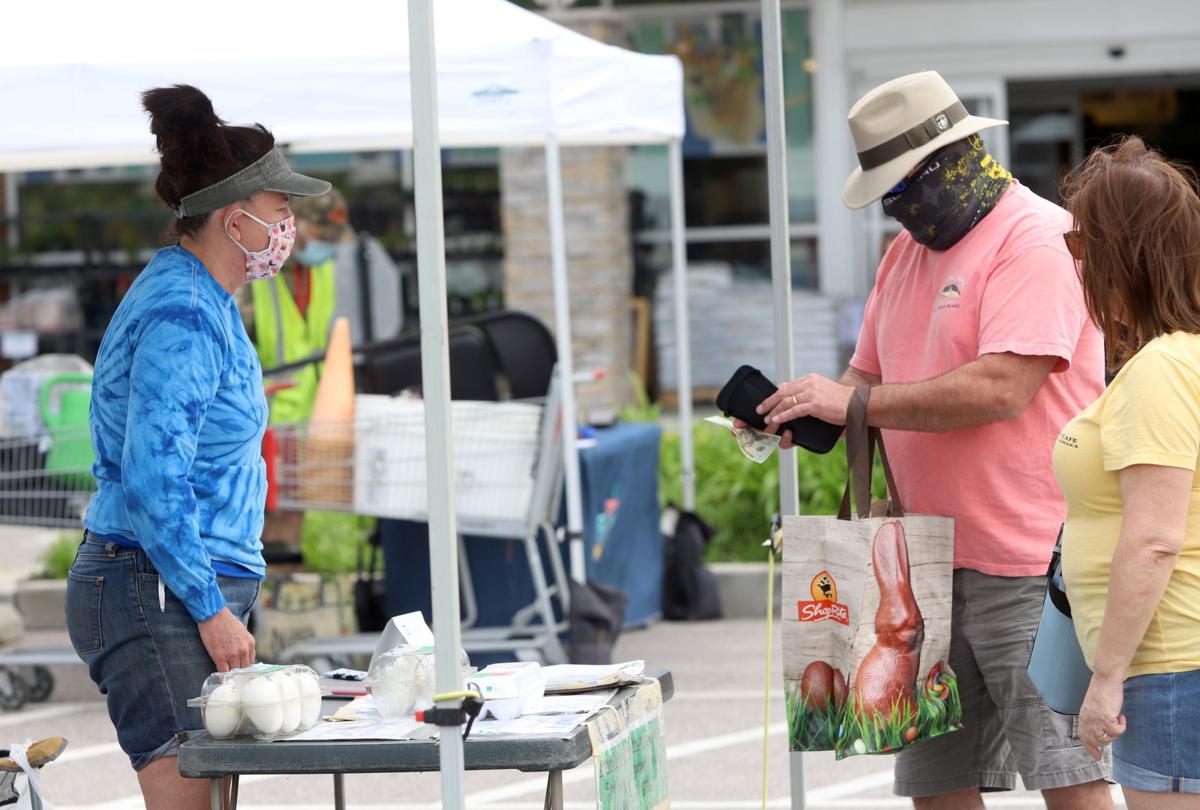 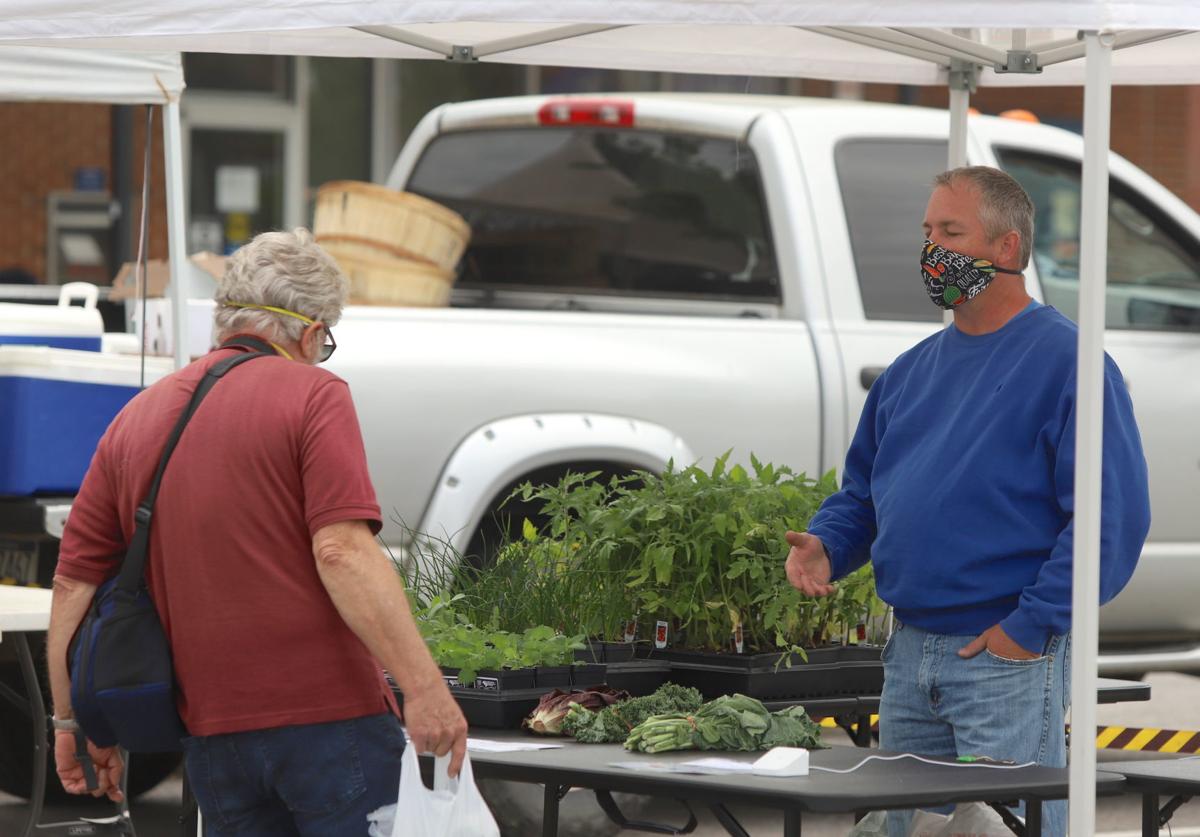 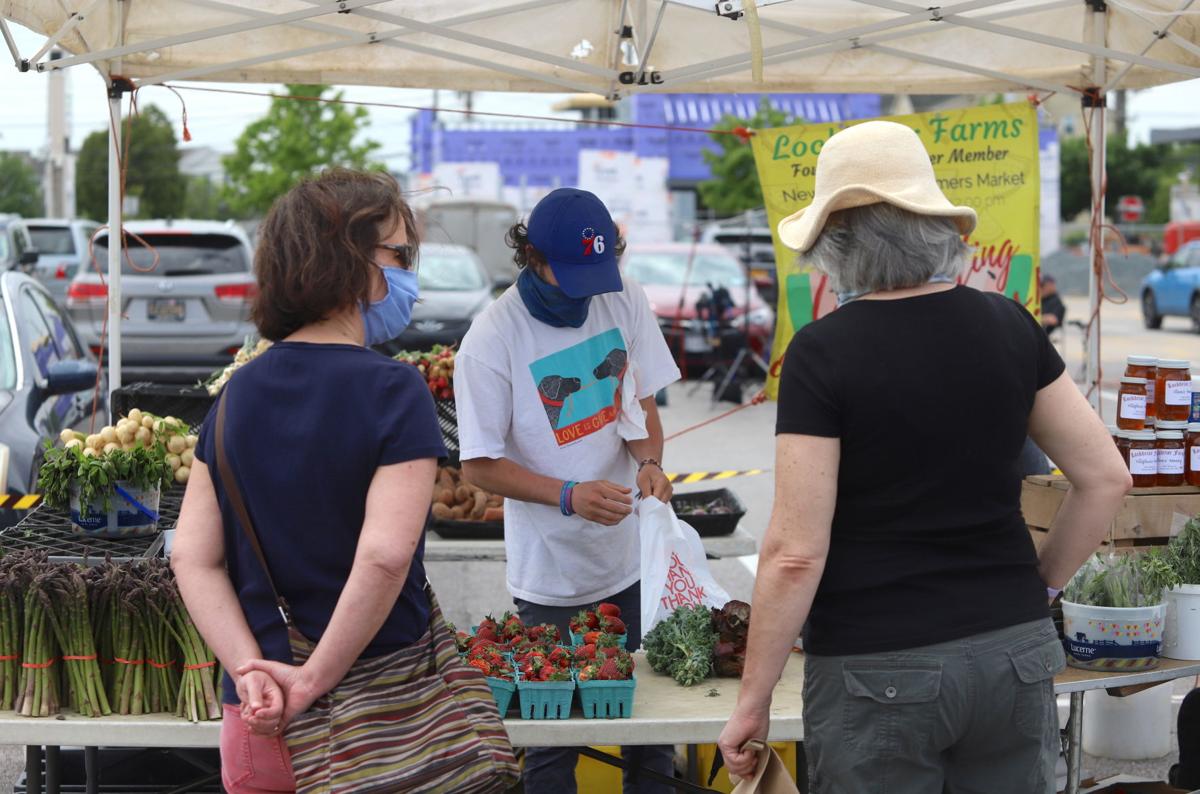 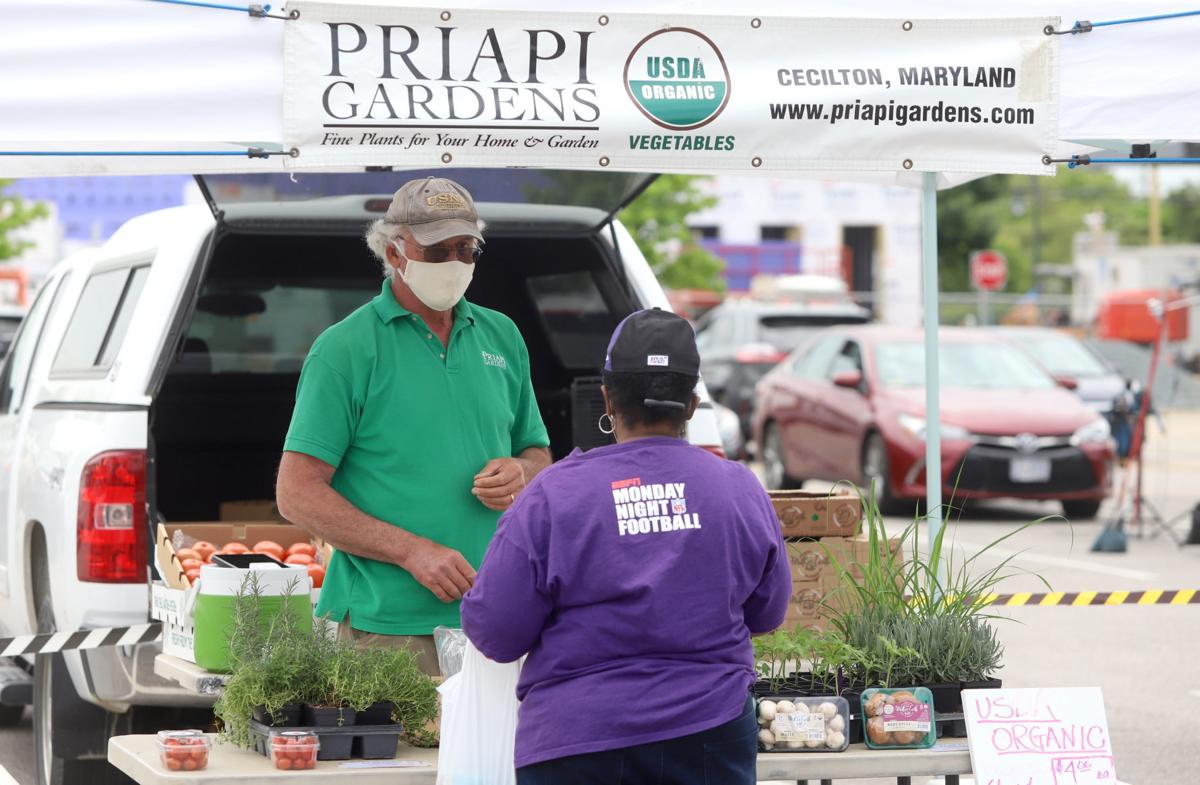 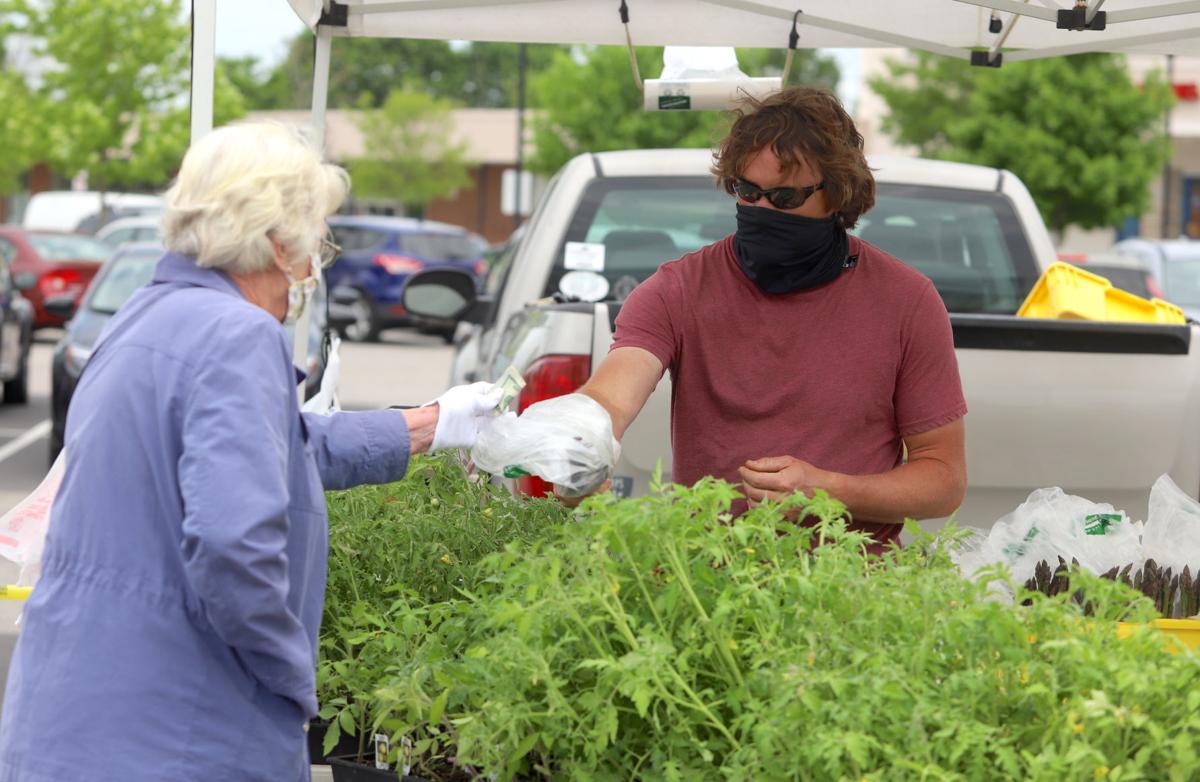 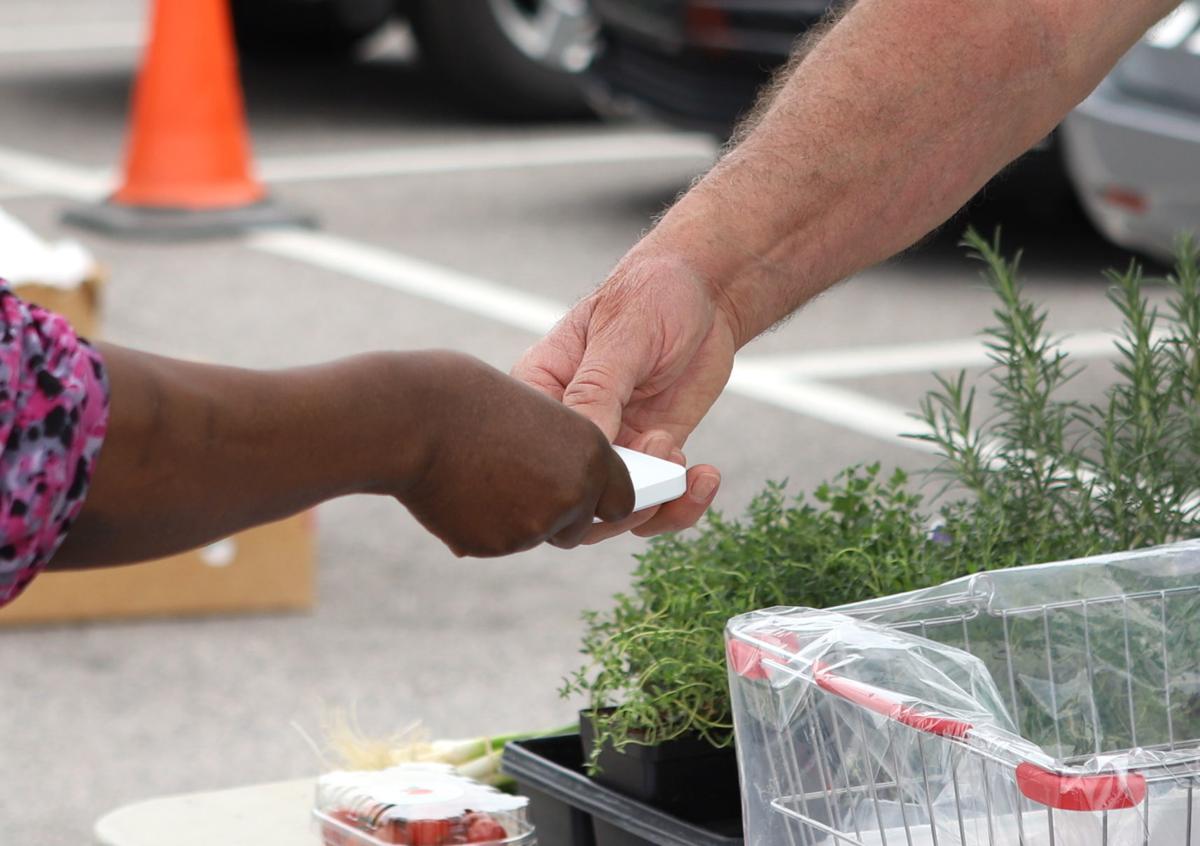 Vic Priapi, of Priapi Gardens, holds out a credit card reader for a customer to use Sunday at the Newark Natural Foods Co-op Farmers Market. 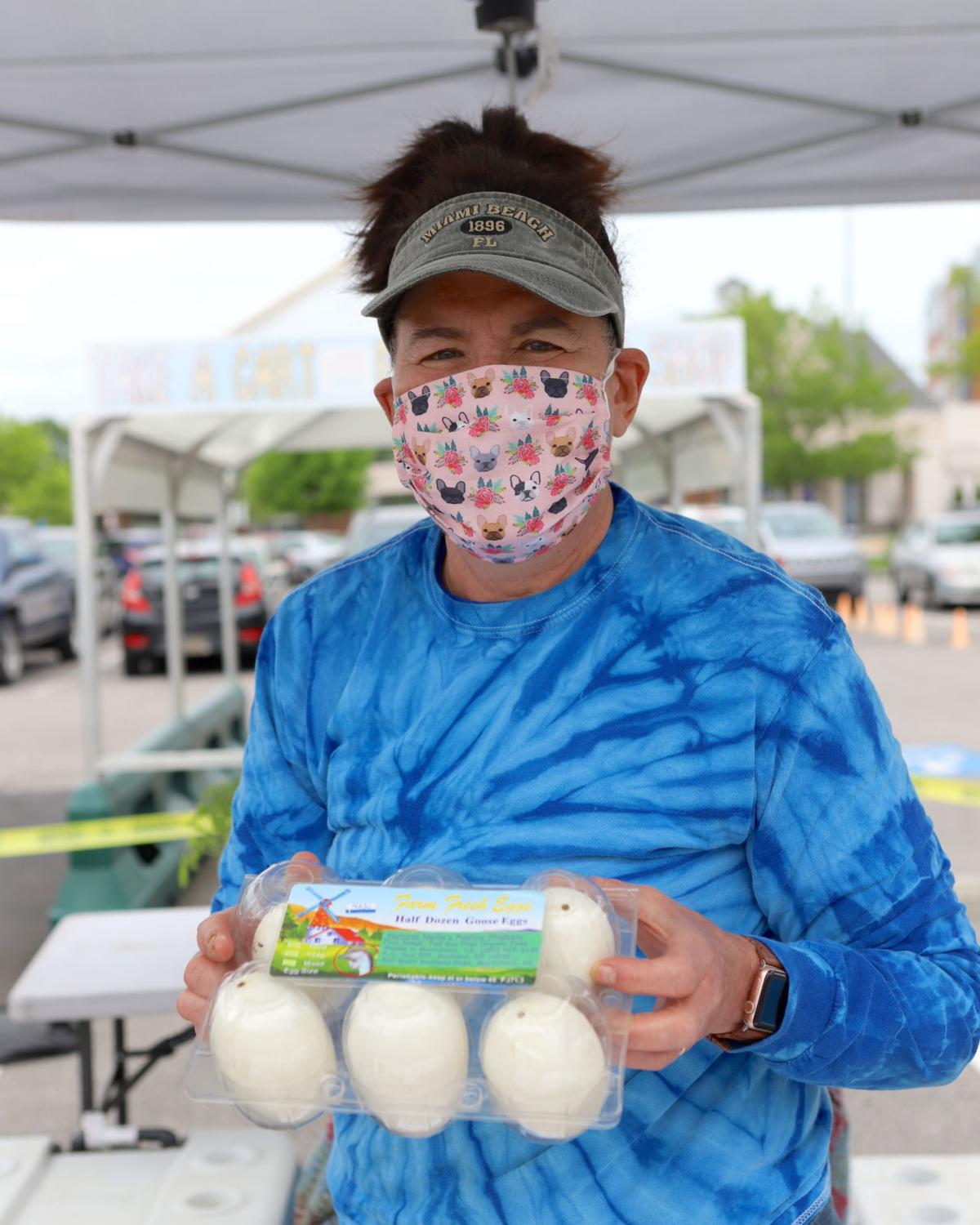 Vic Priapi, of Priapi Gardens, holds out a credit card reader for a customer to use Sunday at the Newark Natural Foods Co-op Farmers Market.

Wear a mask and stay at least six feet away from other customers. Follow the one-way paths around the market. Don’t squeeze the tomatoes – or touch any of the produce, for that matter.

When the Newark Natural Foods Co-op Farmers Market held its pandemic-delayed opening day on Sunday, there were a bevy of new rules for customers and vendors to get used to. Still, with plenty of fresh produce available and a steady stream of shoppers, few were complaining.

“It’s good to be back,” said Nellie Forwood, of Natural Nellie’s Poultry Products in Rockland, who has been selling her chicken, duck and goose eggs at the weekly farmers market for 10 years. “We have a community here. Everybody knows everybody.”

The Co-op Farmers Market typically would have opened May 3. Market manager Catherine Hallman said several farmers markets in Delaware joined together to create a safety plan for reopening and made their pitch to state officials. Last week, the state gave the go-ahead and published a list of rules the markets must follow.

Under the rules, pathways must be one-way, and customers are prohibited from doubling back. The number of people allowed in at any time is limited, and only two members of a household are allowed to enter.

State officials noted that until the pandemic is over, farmers markets are no longer considered a “social venue,” with loitering and congregating prohibited. Only produce vendors are allowed, meaning that certain staples of the Co-op market, such as food trucks, the massage booth and the “ask an architect” stand are missing this year.

Customers aren’t allowed to touch any products, so vendors either had the items pre-packaged or bagged veggies up when a customer ordered.

“We want to make sure that opening the farmers markets in Delaware is done in a way that maximizes the safety of market staff, family farmers, and the customers who are looking to purchase produce, specialty crops, and other value-added food items,” Delaware Secretary of Agriculture Michael T. Scuse said in a prepared statement. “We know a lot more about COVID-19 now and the steps we all need to take to prevent the spread of this disease. Farmers markets will not be the same social experience as they were prior to COVID-19, but we hope that Delawareans will utilize the markets as a place to purchase locally produced food.”

Hallman said there was a line to get in the market in the morning, and attendance was near what the market would see on a typical day in May.

“People have been very good about all of it,” she said. “They’ve been very patient and understanding about what we need to do.”

At the Priapi Gardens booth, proprietor Vic Priapi had a well-honed system in place. The Cecilton, Md., farm also participates in four farmers markets in Maryland, which has allowed them to remain open throughout the shutdown, so he has been dealing with social distancing for a while already.

All his produce was stacked behind his table – close enough for customers to view but far enough away to keep them from touching it. White lines on the pavement marked off where customers needed to stand.

When shoppers were ready to pay, Priapi held out a Square credit card reader, and the customer either used a contactless payment method or inserted his or her credit card into the reader, meaning Priapi never had to touch the card.

Cash transactions are discouraged at the market this year, but customers could deposit exact change into a container. Priapi said he will take the container home and let the money sit for a few days before handling it.

A few years ago, Priapi simplified his market booth by prepacking much of the produce and selling everything in quantities that all cost $4, so the new regulations didn’t take too much adjustment.

“We were very lucky that we were already nine-tenths of the way there,” he said.

The hardest part is getting customers to abide by the rules, Priapi said, shortly before turning around to gently chastise a woman for crossing the white line while buying tomatoes.

“We’re very happy to coach and coax the public,” he said.

While the pandemic has been detrimental to many businesses, Priapi’s Cecilton, Md., farm has fared well, he said.

“Our sales are up significantly due to people wanting to stay out of the grocery stores and stay out in the open air and have fresh, locally grown food,” he said.

“It’s really showing people to just go to the farmer directly,” Carlisle said, as he sold produce, plants, cheese and more at his booth. “It’s helped us out there.”

The Co-op Farmers Market runs from 9:30 a.m. to 2 p.m. each Sunday through November in the parking lot of Newark Shopping Center.