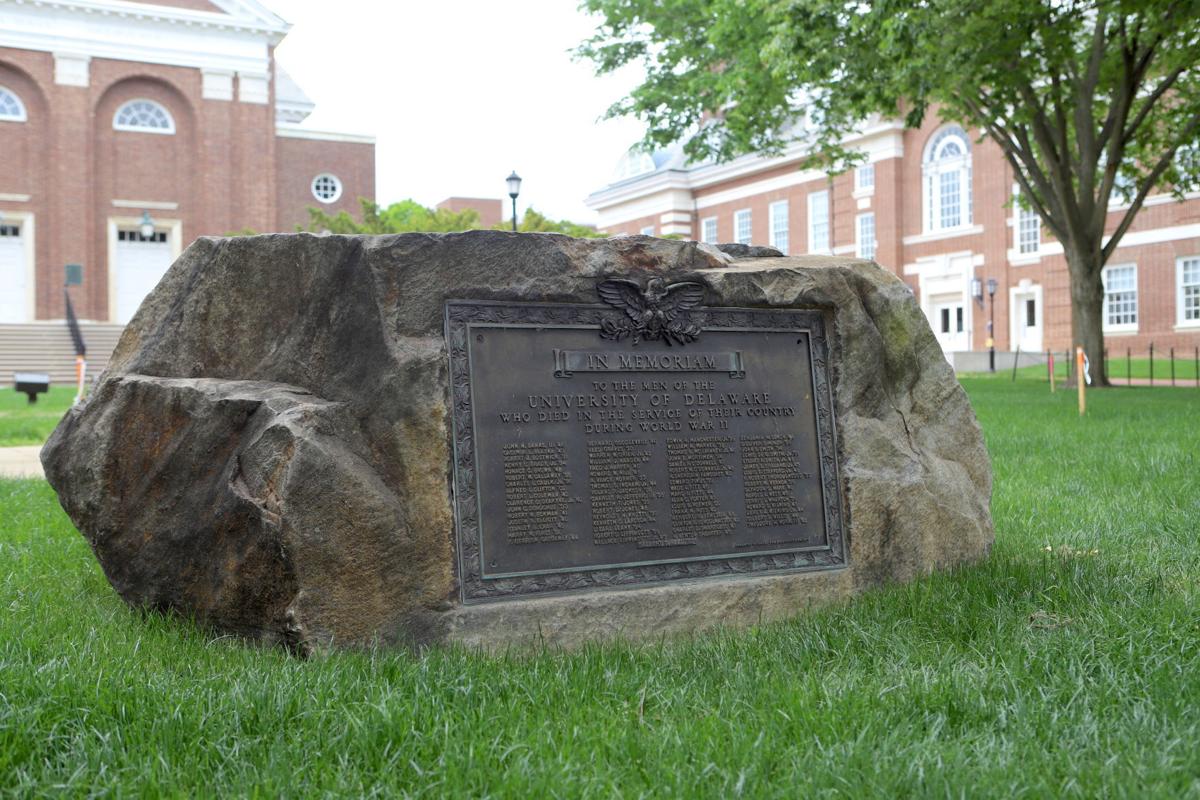 This memorial in front of Mitchell Hall honors the University of Delaware students and alumni killed during World War II. 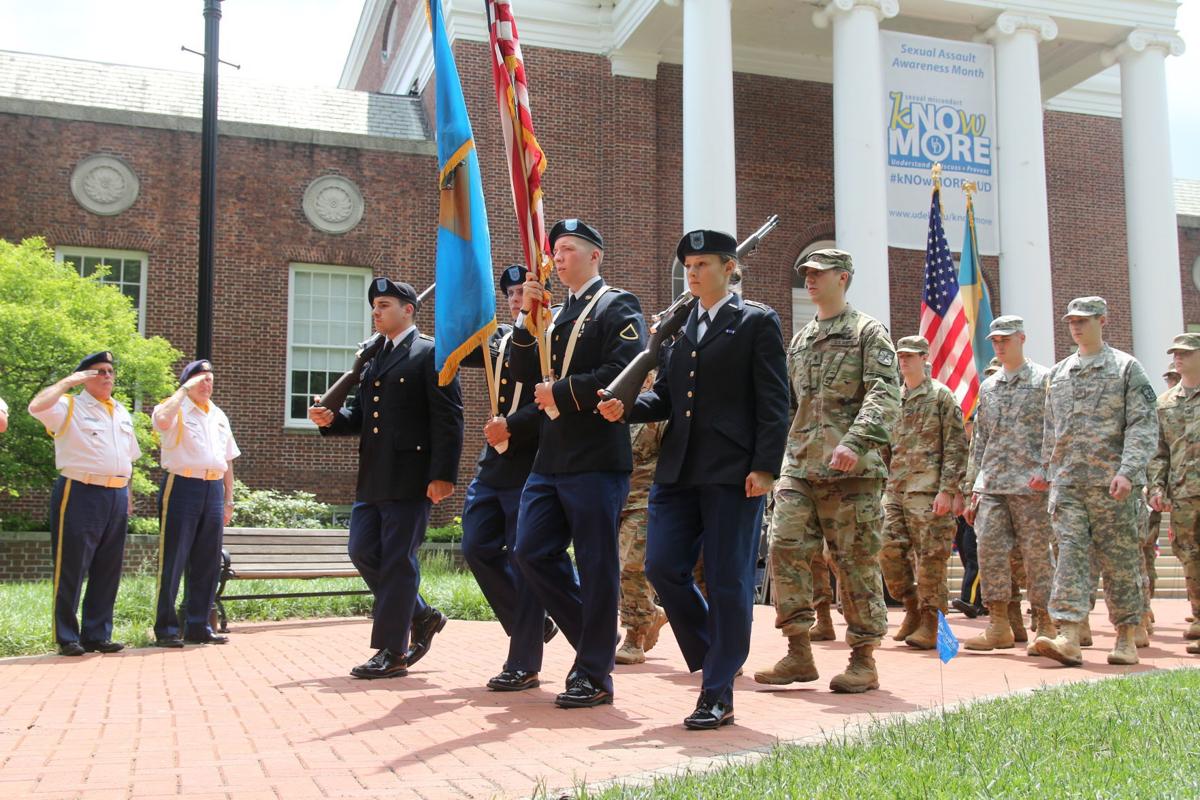 A ceremony in front of Memorial Hall honors fallen troops in 2018. 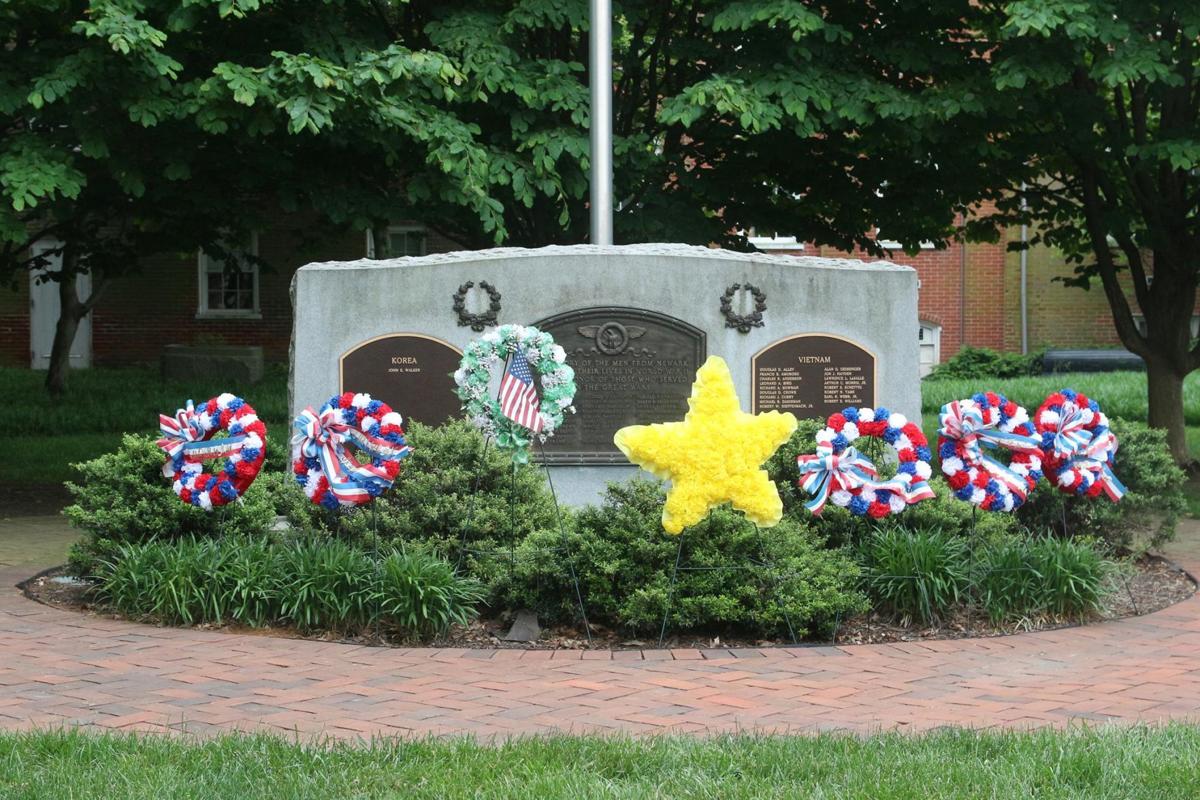 Newark's war memorial is located on the Academy Lawn. 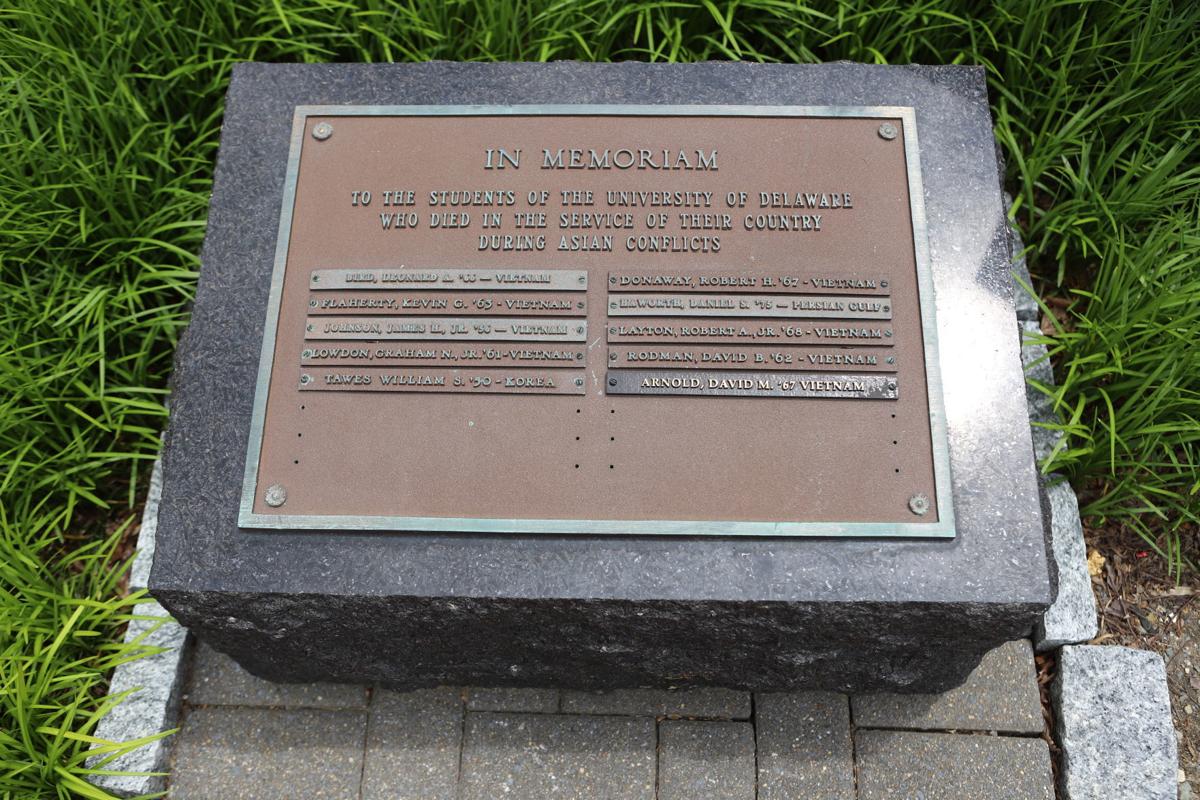 A plaque on the north side of Memorial Hall honors UD students who were killed in Korea and Vietnam. 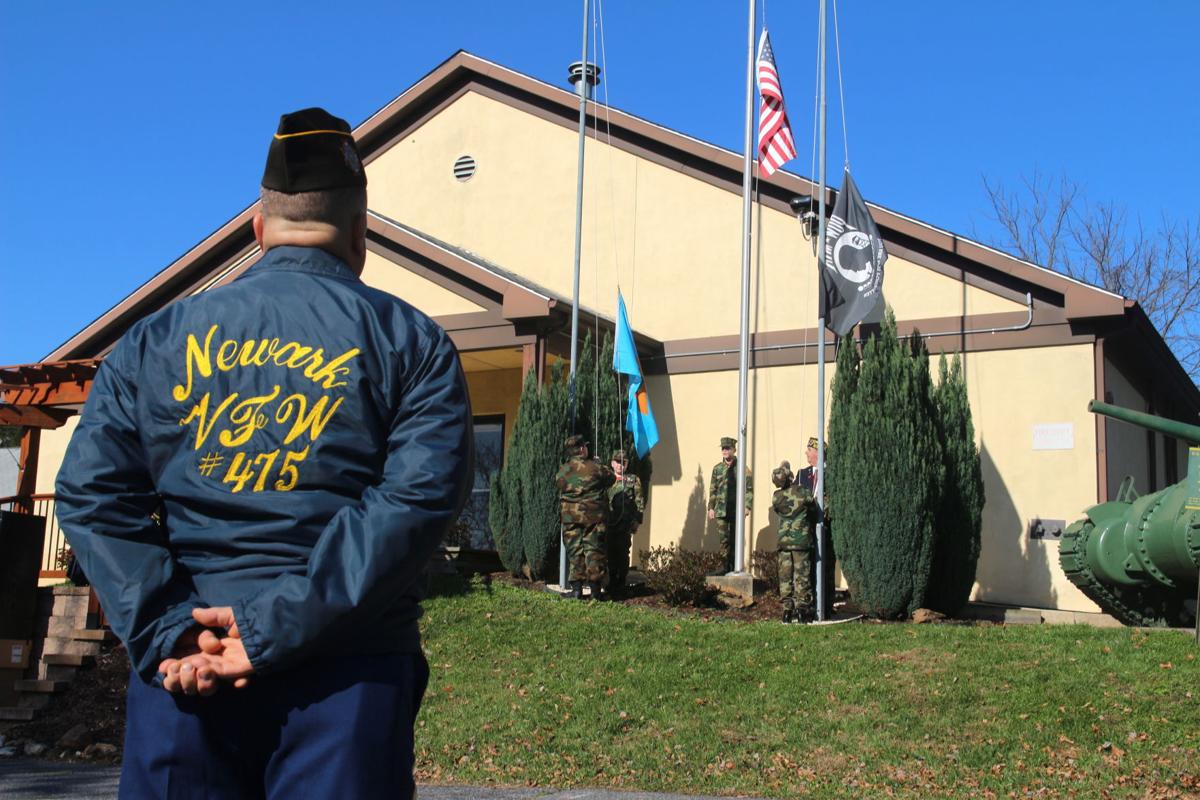 Veterans gather outside VFW Post 475 in November 2018 for a Veterans Day ceremony commemorating the 100th anniversary of the end of World War I. 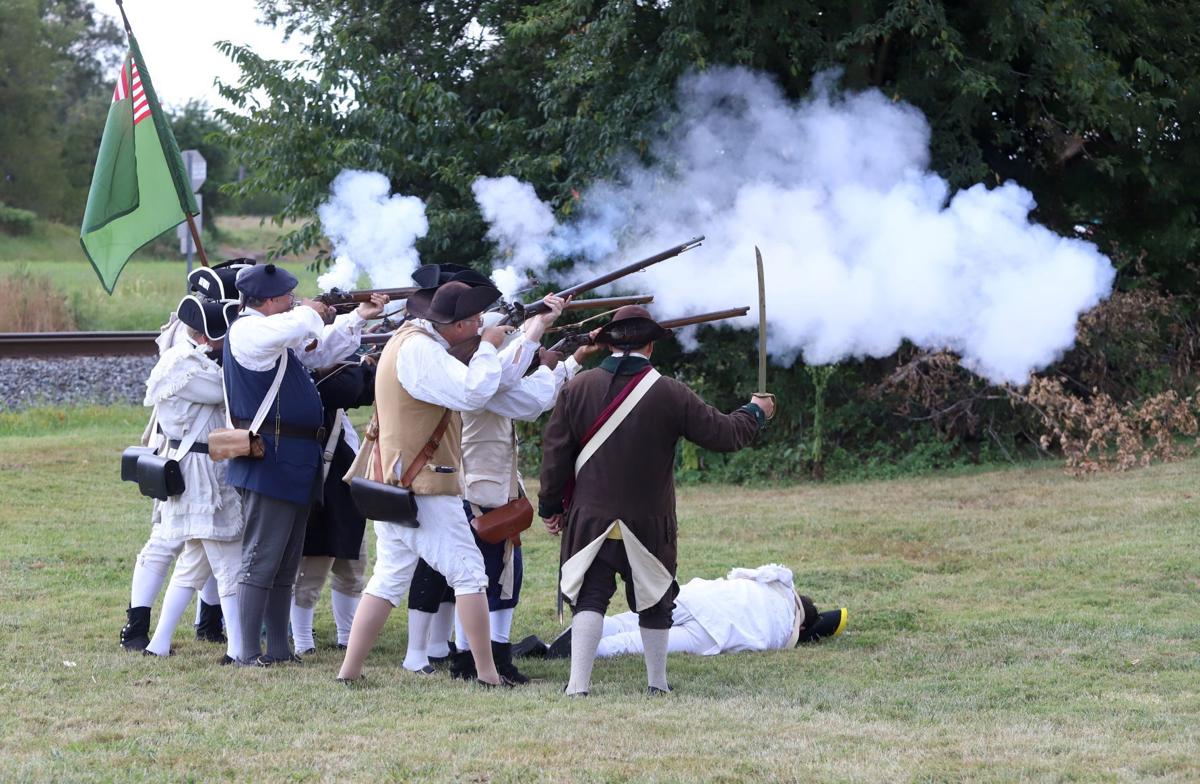 Pencader Heritage Museum hosted a re-enactment of the Battle of Cooch’s Bridge in September. 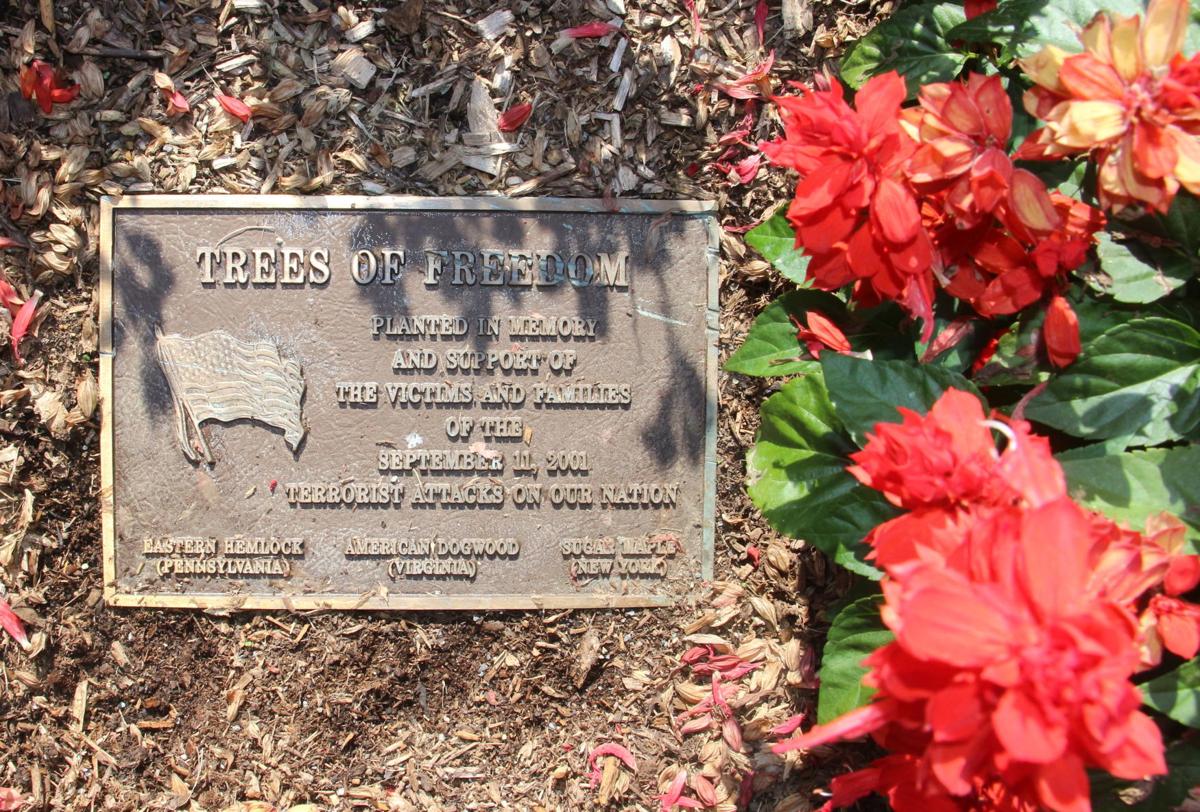 Olan Thomas Park is home to a plaque and trees honoring the victims of the 2001 terrorist attack. 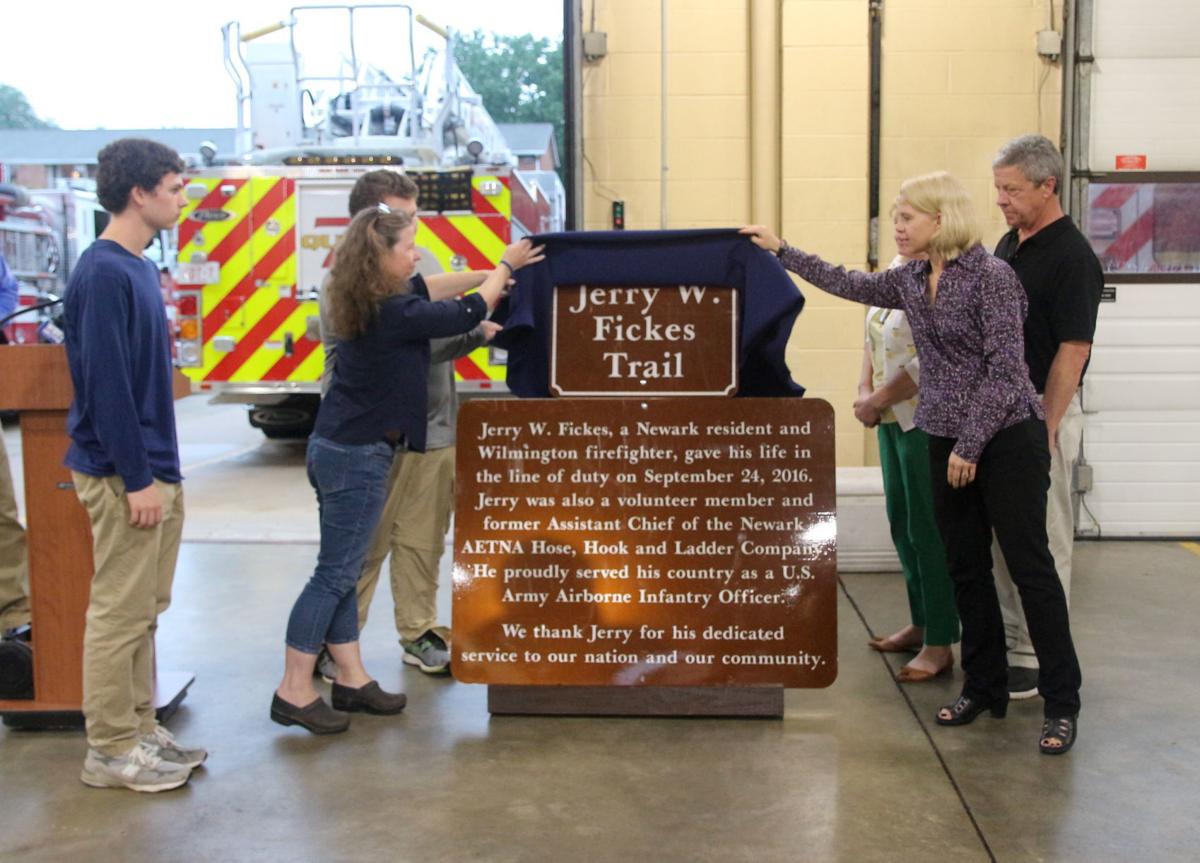 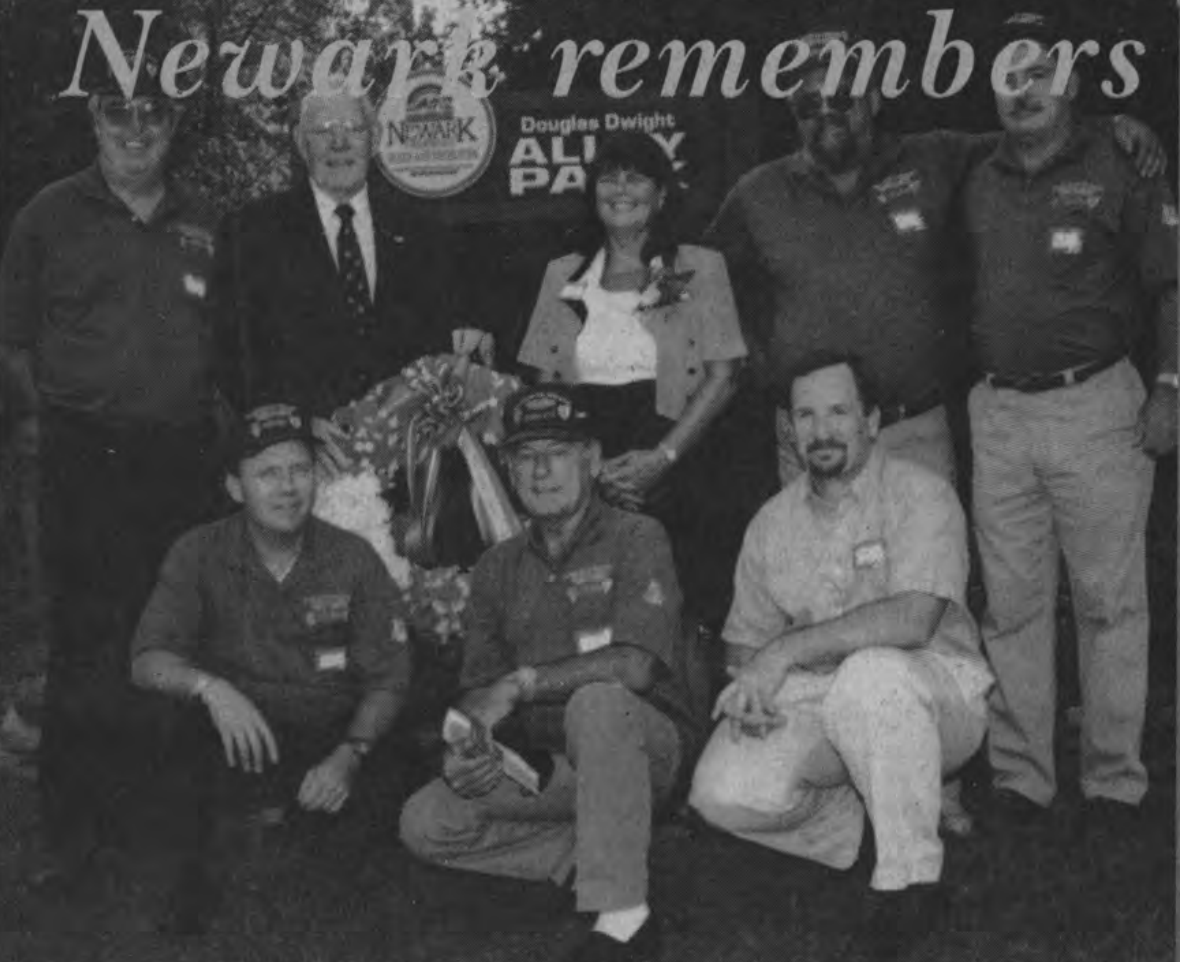 A park is named for Douglas D. Alley in 2001 during a ceremony attended by city officials and soldiers he served with.

Most Newarkers are aware of the history behind the University of Delaware’s Memorial Hall – the stately building that was constructed in memory of Delawareans killed in World War I.

However, while the building is the city’s most prominent war memorial, several lesser-known sites around the city also pay tribute to Newarkers who gave their lives in service to their country.

While the pandemic forced the cancelation of Newark’s parade and other public commemorations this Memorial Day, these sites can be visited at any time. Here’s a look at some of the war memorials located around the city.

In 1922, UD began raising money for a large memorial to Delawareans killed in World War I.

The fundraising campaign included a massive parade in Wilmington designed to raise awareness of the effort. UD students rode a special train to Wilmington and were joined by thousands of school children as they marched to Rodney Square. That event alone raised $34,000.

Memorial Hall opened in 1925. The first building to serve both the men’s and women’s campus, it functioned as UD’s library until the Morris Library opened in 1963. Memorial Hall now houses the English Department.

In the lobby of Memorial Hall is the Book of the Dead, each page of which lists the name of a fallen service member. Every morning, ROTC members ceremoniously turn one page of the book.

The book was supposed to include a biography of each service member, but that part of the book was never completed.

Some 90 years later, though, English professor Bernard McKenna and his students began to fulfill that promise, combing through military records, old newspapers and other documents to find out what they could about the fallen service members.

“What we have today is a start,” George Miller, associate chair of the English Department, said in 2016. “I doubt we’ll ever be able to fulfill the original promise, but it would be a fitting tribute to those who served and gave up their lives, to compile the life histories of those who sacrificed so much.”

Another of Newark’s most prominent memorials is the war memorial on the Academy Lawn, located at the corner of Main Street and Academy Street.

The memorial includes plaques that list the names of all the Newark residents who died in World War II, Korea and Vietnam.

City officials lay wreaths at the memorial during the Memorial Day parade each year. The memorial is also the site of a POW/MIA Recognition Day ceremony each September.

Besides Memorial Hall, the UD Green is also home to two other war memorials.

In front of Mitchell Hall, a plaque honors more than 60 UD students and alumni who died in World War II.

Another plaque on the north side of Memorial Hall honors UD students who were killed in Korea and Vietnam.

A third UD memorial is located near Old College and marks the spot where soldiers were inducted into the army during World War I.

A native of Newark, O’Daniel enlisted in the military in 1916 and served seven months on the Mexican border. He then returned to Newark and enrolled at Delaware College but rejoined the military when World War I broke out.

In July 1918, while on a reconnaissance flight over France, his plane crashed and he was killed.

In a letter home shortly before his death, O’Daniel wrote: “I surely do enjoy flying and everything connected with the air. There isn’t an uninteresting incident related to it.”

South of the city, near the intersection of Old Baltimore Pike and South Chapel Street, several memorials and historical plaques commemorate the Battle of Cooch’s Bridge, Delaware’s only Revolutionary War battle.

The battle took place Sept. 3, 1777. Nearly 17,000 British and Hessian troops landed at the Head of Elk — now Elkton, Md. — and marched toward Philadelphia in an ultimately successful attempt to capture the colonial capital. Gen. George Washington sent 800 soldiers to Cooch’s Bridge to scout out and delay the enemy, ordering them to “provide every possible annoyance.

Hiding in the woods west of the bridge, the Continental Army and militiamen ambushed the approaching British troops. The fighting lasted for a few hours before a British charge forced the Americans to retreat. The British occupied the area, including the Cooch house, for five days before marching through Newark and onto the Battle of Brandywine

Approximately two-dozen continental soldiers died during the battle and are believed to be buried somewhere on the battlefield, though their graves have never been located.

Part of the battlefield site is now managed by the Pencader Heritage Area Association, which runs a history museum there and holds an annual memorial ceremony around the anniversary of the battle.

In the Yorkshire Woods neighborhood – located at the southern tip of Newark, off South College Avenue – two streets are named in honor of Newarkers who died in service of their country.

Douglas D. Alley Drive and the identically named city park are named for a 21-year-old Newark High graduate who was killed in action in South Vietnam in 1966. Pfc. Alley was posthumously awarded the Bronze Star and Purple Heart for extraordinary heroism in ground combat against the Viet Cong.

The next street over is Matthew Flocco Drive, named for a Navy meteorologist who was killed at the Pentagon on Sept. 11, 2001. The street was dedicated in honor of the 1998 Newark High graduate during a moving ceremony attended by more than 200 people in May 2003.

Yorkshire Woods isn’t the only Newark neighborhood that uses its street signs to honor fallen service members. In the Hunt at Louviers, several of the streets are named for Newarkers killed in Korea and Vietnam: Francis Amoroso, Leonard Bird, Richard Bowman, Jon Hayden and John Walker.

Meanwhile, Kirkwood Highway is named for Robert Kirkwood, a Newark native who was an officer in the 1st Delaware Regiment during the Revolutionary War. He was later killed during the Indian wars in 1791.

Pulaski Highway (Route 40) is named for Revolutionary War general Casimir Pulaski, who was killed during the siege of Savannah in 1779.

Newark’s newest memorial honors Jerry W. Fickes, a Newark resident and longtime volunteer firefighter for Aetna Hose, Hook and Ladder Company who died battling a house fire in Wilmington in 2016. Before becoming a firefighter, Fickes served in the U.S. Army as an airborne infantry officer.

In 2018, the city named a trail in Rittenhouse Park for Fickes, who was an avid outdoorsman.

“Our simple hope is that as generations walk this trail dedicated to Jerry they ask, ‘Who was Jerry Fickes?’” Dan Seador, president of Aetna Hose, Hook and Ladder Company, said during the dedication ceremony. “We hope they will research his name and be inspired by the character of a man who gave himself completely in service to his community.”

Pop a WW I I Vet, A Fighter Pilot , took Me over on Main St. to the Academy St. Lawn Memorial, and He looked at the WW II people and says, l knew all of Them. He then says everybody He knew went except 2 people that were C. O. 16 Million Men came back after WW II.