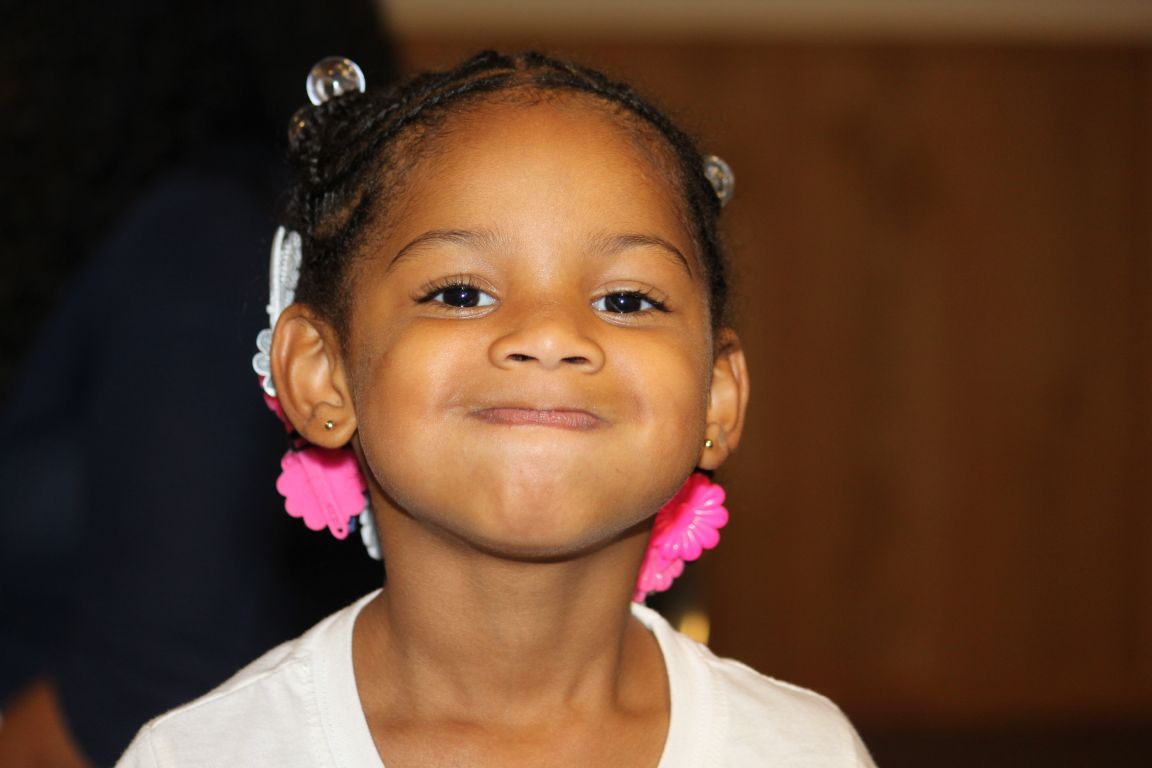 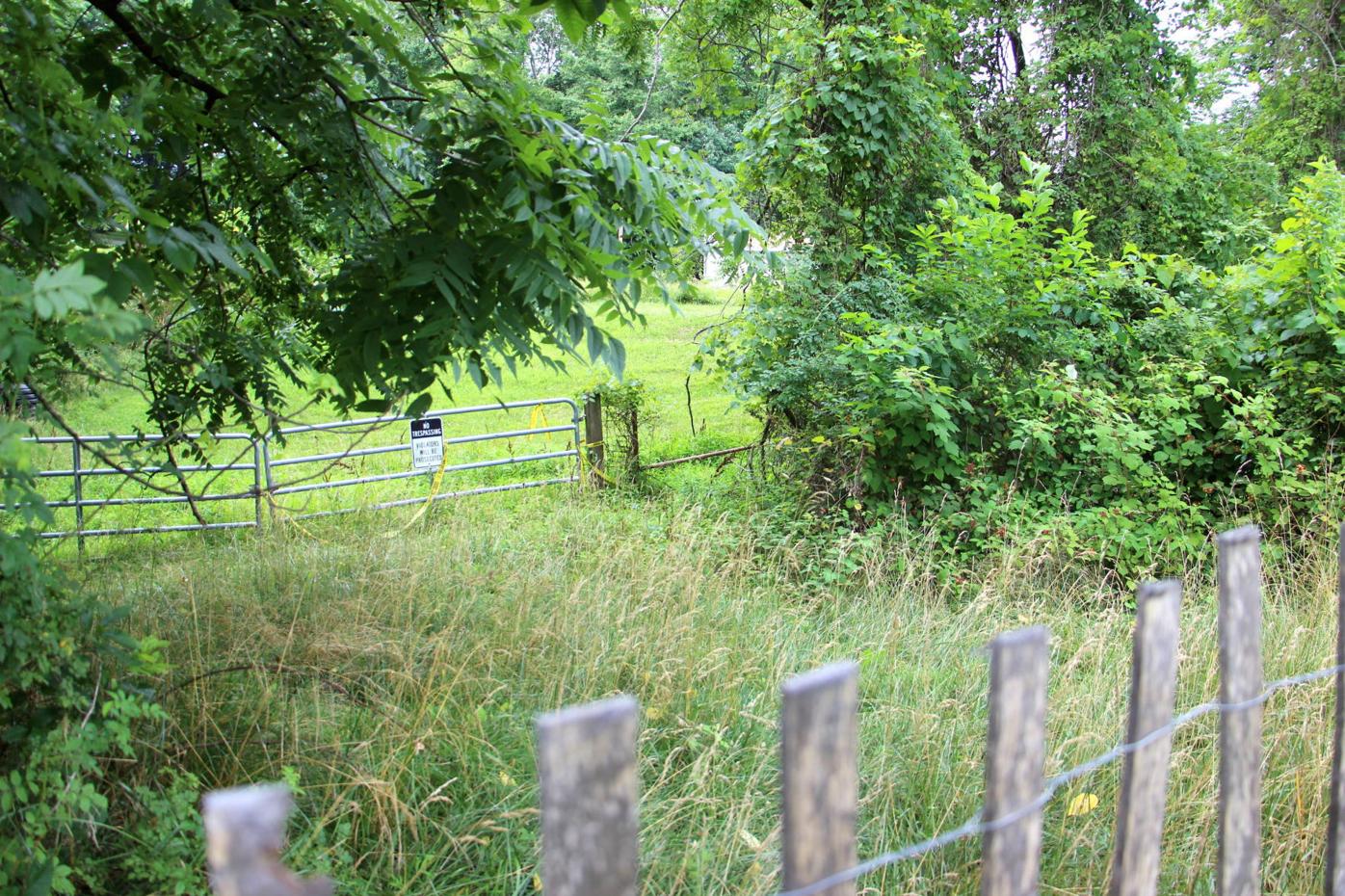 A temporary barrier installed by the city now blocks off the path leading to a broken fence where Mariah Selby entered the country club property. 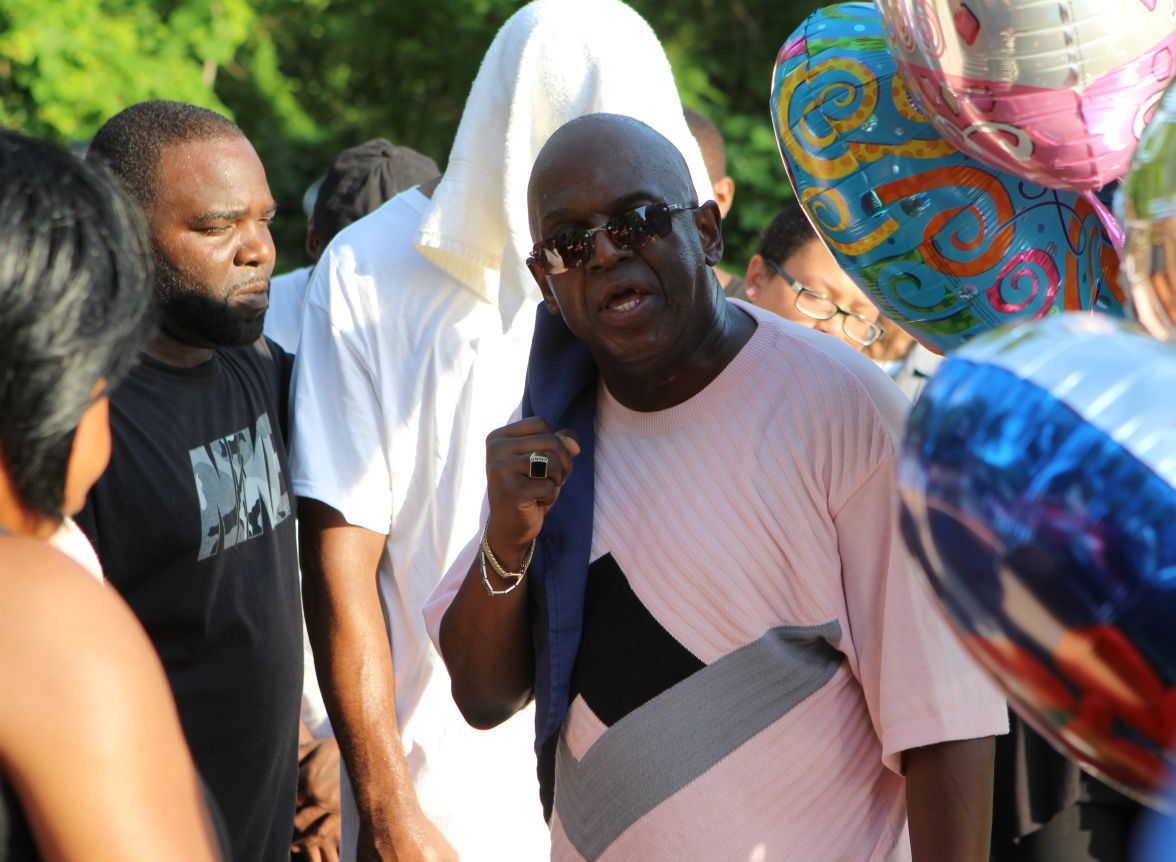 The Rev. John Nichols, Mariah Selby’s great-great uncle, speaks at a vigil for the 4-year-old in June 2015. 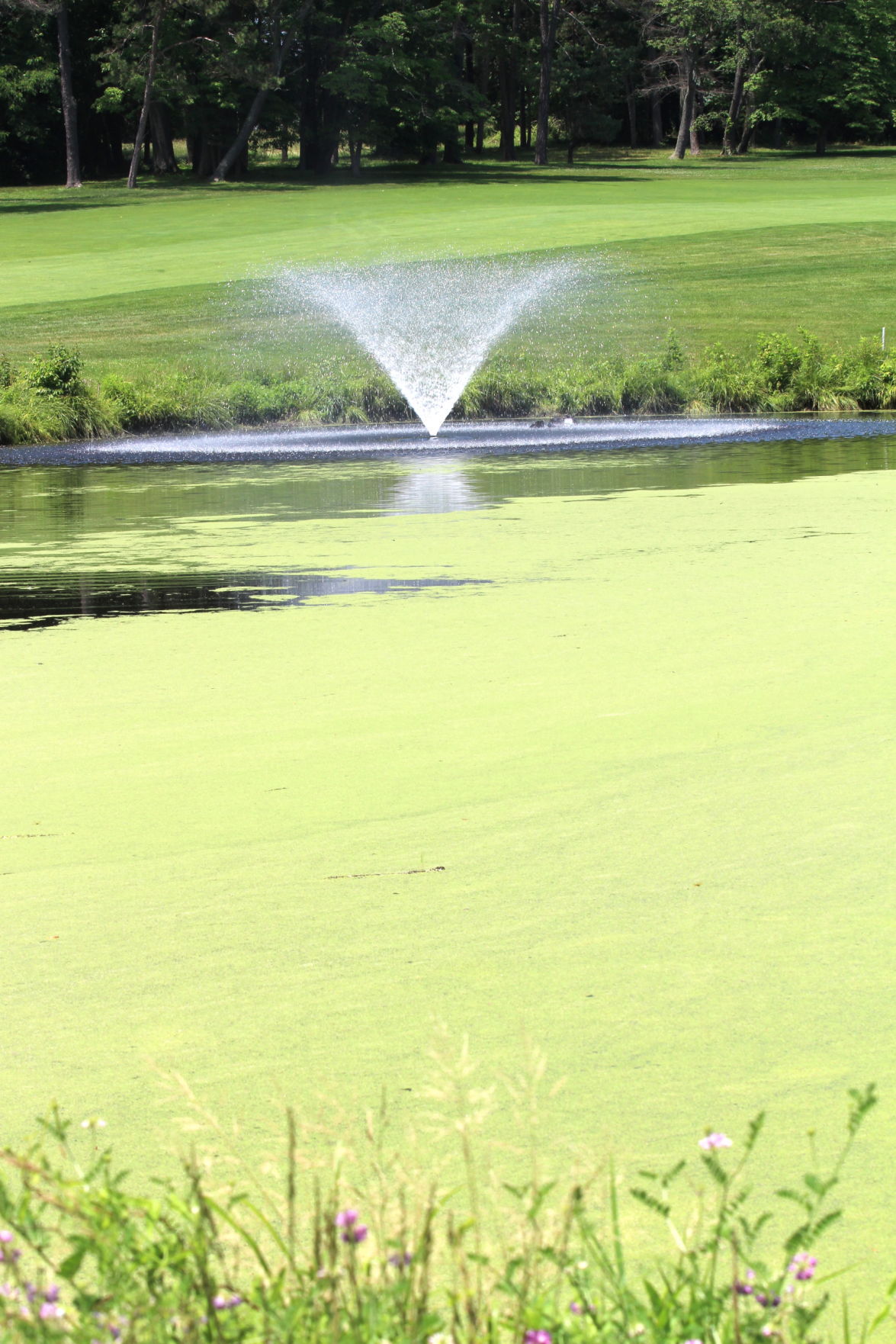 This photo, taken one day after Mariah Selby’s death, shows the pond where the 4-year-old drowned.

A temporary barrier installed by the city now blocks off the path leading to a broken fence where Mariah Selby entered the country club property.

The Rev. John Nichols, Mariah Selby’s great-great uncle, speaks at a vigil for the 4-year-old in June 2015.

This photo, taken one day after Mariah Selby’s death, shows the pond where the 4-year-old drowned.

The family of a 4-year-old girl who drowned last year after falling into an irrigation pond at the Newark Country Club is suing the country club and the city, claiming both entities failed to protect the child from harm.

The lawsuit, filed in Delaware Superior Court last month, stems from an incident that occurred on June 13, 2015, when 4-year-old Mariah Neveah Selby was at a private party outside the George Wilson Center with her father. The city-run community center is often rented out to citizens.

At some point, the young girl wandered away from the group and onto the adjacent country club property, where she slipped into the pond. Someone called 911 and when first responders arrived, attendees of the party were already in the pond searching for Mariah.

Within two-and-a-half minutes, a firefighter and a Newark Police officer pulled her from the water and performed CPR along with New Castle County Paramedics. She was then rushed to Christiana Hospital, where she later died.

According to court documents, Mariah’s mother, Tanesha Williams, and father, Lamar Selby, are suing the country club and city for an unspecified amount to cover Mariah’s hospital bills and funeral expenses in addition to damages from their emotional distress, including “anxiety, depression and a sense of loss.”

The lawsuit states that Selby directly witnessed the injury to Mariah, which caused him to suffer “severe emotional shock, trauma and psychological injury with physical manifestations.” As a result, the lawsuit states, Selby has been experiencing “sleeplessness, anxiety, depression and other symptoms, and will continue to suffer in the future.”

Mariah’s parents are also claiming negligence because the country club and city failed to post additional warning signs and improve the surrounding fence following an incident in 2001, when a young child drowned in the very same pond.

On Jan. 20, 2001, an 8-year-old boy climbed a fence and was walking on the frozen pond with his 11-year-old sister and 13-year-old cousin when he fell through the ice. The sister ran home to alert her mother, and country club personnel called 911.

The boy was trapped for 45 minutes before firefighters plucked him from the icy water. He initially survived but died a year later from his injuries.

The boy’s family sued the country club, but the Delaware Supreme Court ruled that the club was not liable because the child’s behavior was his parents’ responsibility and the pond was not an “attractive nuisance.”

Mariah’s parents claim that in their daughter’s case, the city and country club knew of the danger created by the pond and failed to take reasonable measures to provide a safe walkway. According to the lawsuit, they are also claiming the city and country club failed to properly secure the pond, maintain the path and fence, and post warnings that a pond was on the premises.

Near the pond there is a padlocked gate – adorned with a “No Trespassing” sign – that separates the country club from the community center property, and a chain-link fence obscured by brush and weeds runs along the length of the property line, behind the George Wilson Center’s baseball diamond and tennis courts.

Mariah likely entered the property through a gap where it appears the fence was broken. Just a thin, rusty metal bar and a few weeds spanned the gap, making it easy to enter the country club property.

A day after Mariah’s death, Laura DelPercio, general manager of Newark Country Club, said she was not aware of the gap in the fence and could not confirm how long it had been there. Asked if the club was planning any improvements to the fence, she said she would wait until the investigation was complete and “go from there.”

More than a year later, the gap in the fence is still there and there are no visible improvements to the area other than a short, temporary wooden fence the city erected last summer. The fence, which appears to have been repurposed from somewhere else, blocks off the tree-lined path that leads to the broken country club fence. The area between the fences has become overgrown with weeds.

At the time it was installed, a city spokesman acknowledged that the temporary fence wouldn’t keep a determined child or adult off the country club property but said it serves as a “clear delineation” that the area is off-limits.

The city and the country club both declined to comment Wednesday.

.....and to you "Patriots" I will try to explain to you that no one is PERFECT, and we are human beings, which means first and foremost that we must be mindful of children. And yes, we ALWAYS had a watchful eye on our children, so your guess is wrong. As a parent it was my responsibility first and foremost to protect little ones from dangers. And you look to blame others (see your 7-15 post) 100% for this tragedy. SHAME ON YOU. And why is your post about money relevant to the conversation?

I am sorry to read this story and the tragic consequesces due to this parent's complete failure to look after his child. How do we as a society protect children from those responsible for their well-being? Is it the Country Club's fault that a parent fails to look out for the safety of their child? People: they are children, if you are the parent YOU must be aware of their surroundings ALL THE TIME!! It is not up to society to protect your children from all the pitfalls and dangers in our daily activities. If you brought the child into the world, it is up to you to protect them until they can make decisions on actions and the consequences of those actions. I will restate my concern about our society in general: we are rapidly becoming a nanny state where we want others to be responsible for the well-being and safety of each of us. Take the responsibility that comes from being the adult in the child's life, for goodness sake.

I am appalled at the insensitive and judgmental comments. I sincerely hope that none of you perfect people tragically lose a loved one, especially a young child! And for the parents on here that claim to ALWAYS have a watchful eye on their children you had better be with your children 24/7 if you are making such a claim. My guess is that's probably not the case but that you just enjoy being a cyber bully. My heart breaks for this family and I can assure you that no amount of money will make these people whole again. Rest easy baby girl, prayers for all that have had to find a way to go on and to the people who have the audacity to blame these parents for being human SHAME ON YOU!

To be quite FRANK, It seems like every small-minded, empathetic, stomach turning, ignorant, enraged and arrogant comment at this 4 year olds LIFE cut short due to the lack of responsibility of this careless and SCARY country club ran by complete animals, ARE the animals themselves. Justice will be served. Rest In peace to this beautiful angel and all the condolences in the world to her parents. On behalf of everyone humane thank you to Newark country club for failing to tend to a 2 minute phone call and a priceless cost- due to the loss of a toddlers life- you're GREAT PEOPLE! ... Only to defend the ungodly afterwards. Sickening is what this country club is. Great job!!!!!! 2nd time in a row, A HUGE caring award goes to the staff.

---and all the condolences in the world to her parents--- neither of which were watching her and didn't know she was missing for 20 minutes !!

The country club should be held liable 100 percent in the death of this child,if the club can't afford to replace a deteriorated fence they should shut down!!!

Our house backs up to the Newark Country Club. About 20 years ago they put up a nice split rail fence adjacent to our property and put No Trespassing signs up as there is a pond nearby. In the ensuing years the fence has deterioted to the point that quite a lot of it is rotted away and is no longer there. I contacted the country club and was told that the fence around the club would slowly be replaced but it would take time as money was tight for improvements.
Sounds like money or lack thereof, took the place of safety in this case.

--is suing the country club and the city, claiming both entities failed to protect the child from harm.--- IF SHE HAD DECENT PARENTS, THEY WOULD HAVE BEEN WATCHING OVER HER AND NOT JUST LETTING HER RUN LOOSE !!! WE ALL KNEW THIS LAWSUIT WAS COMING.......NEED SOME FREE CASH IF THEY CAN GET IT !!

While the lack of concern about upkeep of a property border is concerning, especially for a country club (just another way of showing how dead the membership is), there is most definitely a LARGE responsibility on the parents. I'm not sure you can really make a solid case about the grief and distress portion of the monetary claim, since a large portion of that grief and distress is caused by their own neglect. How does one quantify who gets what portion of the neglect? 3/4 parents, 1/4 club? HUH? Beats me. This case will be a mess and most likely end in some grey-area cash settlement.

Agreed. The club already has precedent in that the court found in the other case that the pond was not an attractive nuisance. In this case the parents are pretty much completely at fault. They have probably had issues with their daughter in the past getting away from them and they were too busy partying to notice she was gone. The father's emotional pain has been brought on by his own negligence, and the one emotion they left out was GUILT. It is terrible whenever a child dies, but I don't think the club is responsible. But they obviously don't have the money to properly maintain their property, so they should either raise some or shut down.

hey there "ranger" maybe you should GET A DECENT BRAIN!!!!!