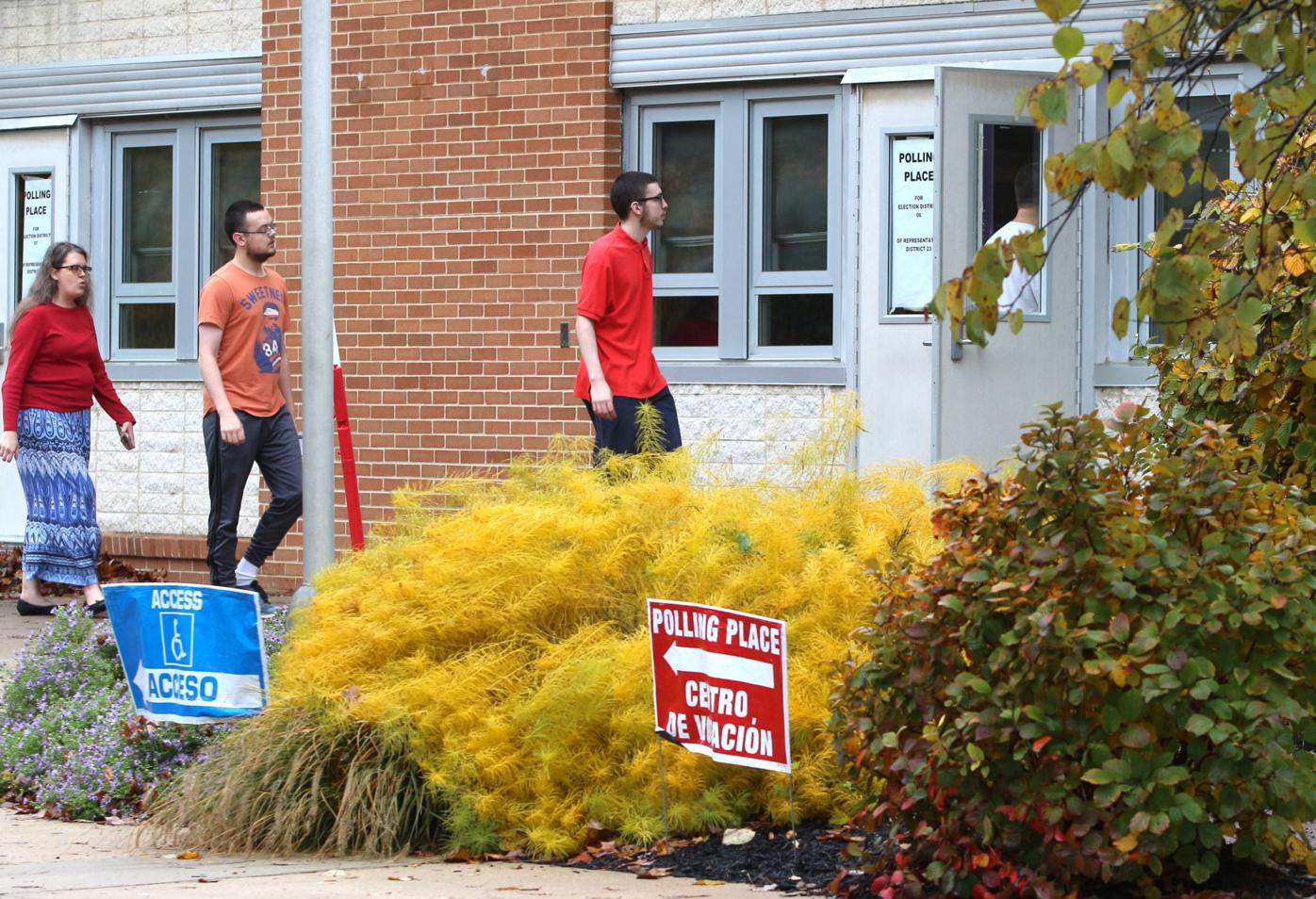 Voters head into the polling place at Maclary Elementary School in November 2018. 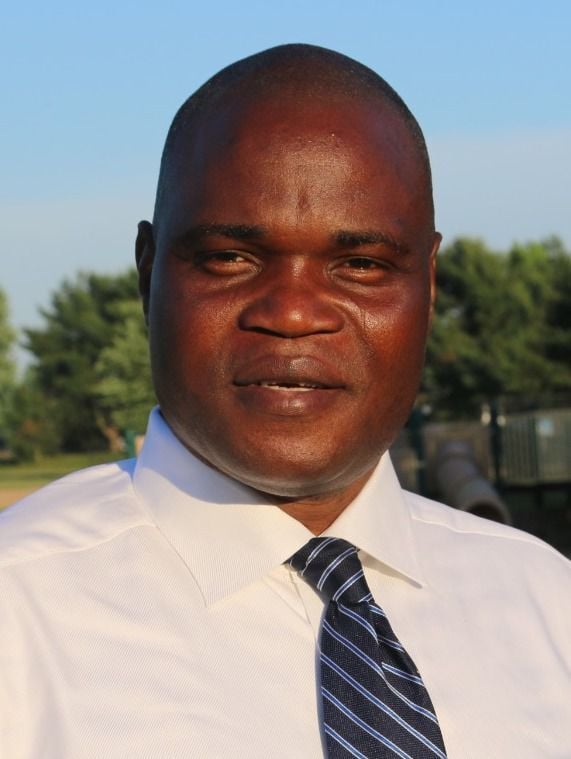 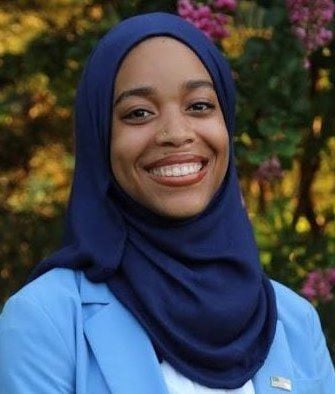 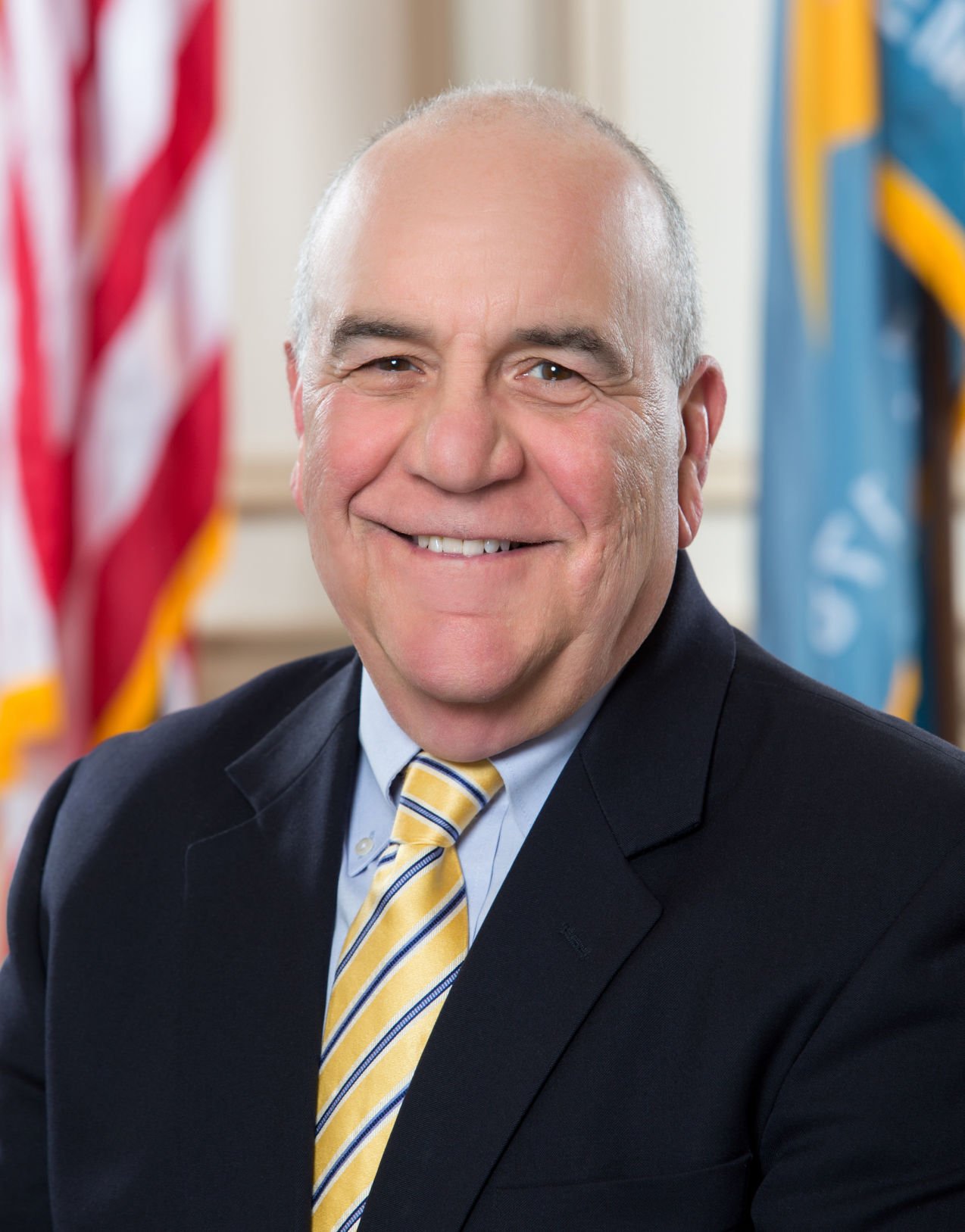 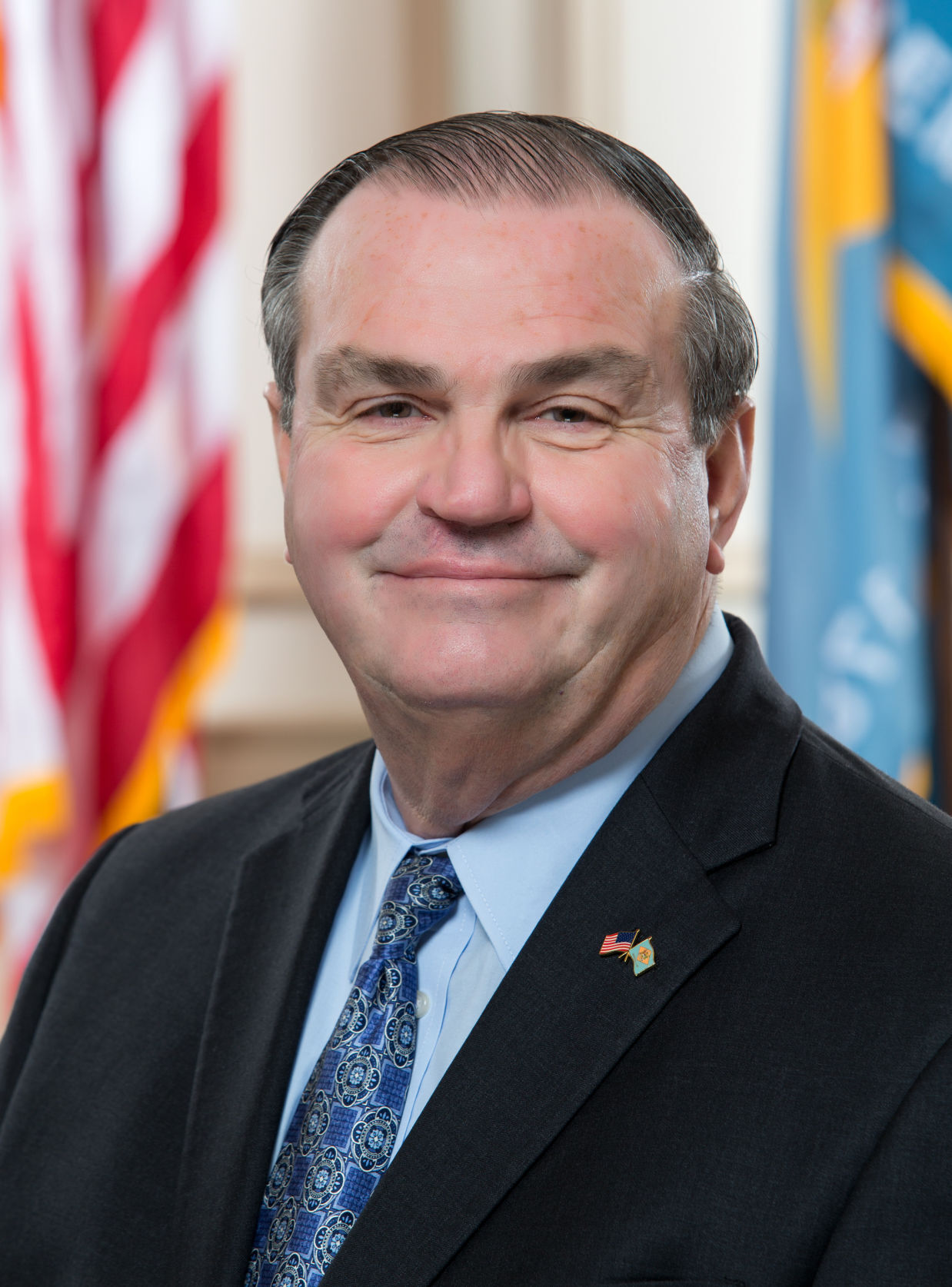 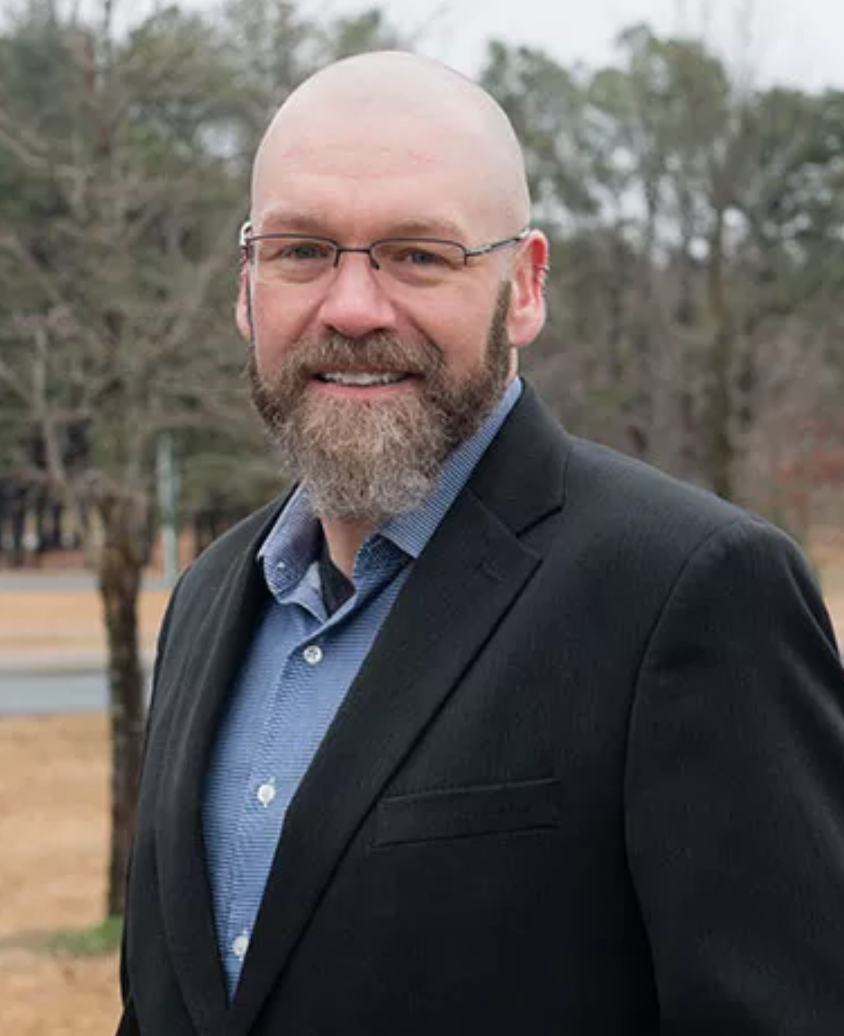 Delawareans will go to the polls Tuesday to cast their vote in several state and local primary races.

Polls are open from 7 a.m. to 8 p.m., though many people have already cast mail-in ballots due the pandemic. Only registered voters from participating parties may vote.

Statewide, voters will choose candidates for governor, U.S. Senate, U.S. House and other races. Also closely watched are the races for New Castle County executive and president of county council.

Locally, though, all eyes are on two state representative districts south of Newark, where two longtime Democratic incumbents have progressive challengers.

In District 26, which encompasses an area south of Newark and parts of Bear and Christiana, incumbent John Viola is being challenged by Gabriel Olawale Adelagunja and Madinah Wilson-Anton. With no Republican candidate, whoever prevails in the three-way primary will win the seat.

Adelagunja is an Iraq War veteran and runs a consulting firm that promotes Delaware companies to African and Caribbean countries. He serves as chairman of the Council for Economic Development of African Descent and also works with people with mental health issues.

He’s worked on campaigns before, traveling to South Carolina and other states to campaign for Joe Biden, but this is his first time running for office himself. He said members of the community asked him to run.

Adelagunja believes he can be a more responsive representative than Viola.

He wants to address education, health care and subsides for small businesses.

He’s also campaigning on strong support for law enforcement, saying he supports police reform but not defunding the police.

“I think we need to address mental health, and that’s what I’m going to do differently. I’m going to bring together a coalition of the community, parents and law enforcement and I’m going to close the gap to address the issue,” he said. “Law enforcement, I see them as our guiding angels. Every community has bad apples, but I don’t like how they’re treating them these days.”

Wilson-Anton, who works as a policy analyst at the University of Delaware’s Biden Institute, got her start in politics as a legislative aid for Viola, which she described as an eye-opening experience.

“I think it's really important that the person representing our community – which is actually a majority-minority district, very young compared to other districts in the state and also very, very progressive – is that our representative should be someone who is fighting for the issues that are important to us and not just getting in line with the caucus,” she said.

Wilson-Anton said that if elected, she would fight for affordable housing and accessible childcare, and one of her main platforms is education funding reform.

“Our funding system is antiquated,” she said. “It's based off of local wealth and not on the need of students. We are one of the few states that still doesn't apportion extra funding for students that need more. So that's really the main thing that I'm interested in changing.”

Viola, who has been in office since 1998, did not respond to an interview request.

“Whether it's as an EMT, volunteer firefighter or Little League coach, I've spent my life serving others in our community,” he wrote in a statement on his campaign website. “I have continued that service as your State Representative in Dover, where I fight for everyone and ensure your voice is heard. I know what it's like to be laid off from a job while raising a family, and I bring that experience to work for you every day.”

In District 27, which includes Glasgow and extends down to the C&D Canal, incumbent Earl Jaques is being challenged by Eric Morrison. The winner will take on Libertarian Bill Hinds, who unsuccessfully ran against Jaques in 2018.

Morrison spent six years as an educator and now works in human resources at a bank. He is on the steering committee of the progressive group Delaware United.

He said he never intended to run for office but changed his mind due to his dissatisfaction with Jaques.

“To be frank, I contacted the incumbent I’m challenging now a number of times about issues. He never responded. That bothered me,” Morrison said. “Then, as I did a little more digging on his record and learned how he doesn't stand for some of the most basic tenets of the Democratic Party, that really bothered me. So, after thinking about those things, and also thinking about issues he hasn't addressed, like health care and criminal justice, I decided this was the right time.”

One of Morrison’s priorities is education reform. He is calling for an end to the funding system that forces school districts to rely on referendums, supports consolidating school districts and argues that the state needs to better spread out money among districts.

“You have some districts that are just rolling in money and you have other districts that are struggling to provide the most basic things to their students,” he said. “In my view, I have just as big of a vested interest in seeing that a child downstate gets a good education as I do my own child.”

His other priorities include expanding access to health care by allowing people to buy into Medicaid, as well as addressing the overdevelopment he says has exacerbated poor infrastructure in his district.

Jaques, who was first elected in 2008, did not respond to an interview request.

“I am proud to be your state representative and your voice in Dover,” he wrote in a statement on his campaign website. “I am always available to hear your concerns and I welcome your input and ideas. We have accomplished a lot together, but we can do more.”

County Executive Matt Meyer is seeking a second term, but must first survive a challenge from Maggie Jones in the Democratic primary. Jones has spent her career working for various state agencies and currently works for the Workforce Development and Community Education Department at Delaware Technical Community College. Whoever wins the primary will be unopposed in November.

County Council President Karen Hartley-Nagle is also facing a challenge in the Democratic primary from Ciro Poppiti and Monique Johns. Poppiti currently serves as New Castle County’s register of wills and unsuccessfully ran for lieutenant governor in 2016. Johns is a paralegal, author, minister and life coach who ran for a Middletown-area state legislature seat in 2016 and 2018, when she made headlines after being caught on surveillance camera stealing her opponent’s campaign literature from a voter’s door and replacing it with her own. Notably, the NCC Democratic Committee has endorsed Poppiti over the incumbent Hartley-Nagle, who has often clashed with members of council and was the subject of a harassment complaint from a former aide. The winner will face Brian Whitaker, from the Independent Party of Delaware, in the general election.

Ken Boulden, who has served as NCC Clerk of the Peace since 1997, is retiring after dropping out of the race at the last minute. In the Democratic primary, Boulden’s chief deputy, Lisa Darrah, is running for the seat against Aja Ajavon, a mediator and Wilmington University professor who filed to run for president of county council before deciding at the last minute to run for clerk of the peace instead. There is no general election challenger.

Six Republicans are facing off in the primary for a chance to challenge Gov. John Carney in November. Most prominent is Colin Bonini, a longtime state senator from the Dover area who unsuccessfully ran against Carney in 2016. Others include David Bosco, a small business owner from Greenwood; David Graham, a tax enforcement officer from Smyrna; Julianne Murray, an attorney from Georgetown; Bryant Richardson, a state senator and newspaper publisher from Seaford; and Scott Walker, a perennial candidate who frequently switches parties and is best known for nailing his hand-painted signs to trees around the state.

Meanwhile, Carney is being challenged in the primary by David Lamar Williams Jr., an accountant from Camden-Wyoming.

Insurance Commissioner Trinidad Navarro is being challenged in the Democratic primary by Kayode Abegunde, a New Castle resident who has worked as an accountant, auditor and insurance consultant. The winner will face Republican Julia Pillsbury, a pediatrician from Dover.

Sen. Chris Coons is seeking his third term as Delaware’s junior senator but first must survive a primary challenge from progressive candidate Jessica Scarane, who works at the Wilmington marketing firm Archer Group.

Meanwhile, two Republicans are vying for a chance to run against Coons or Scarane in November. James Demartino is an attorney from Lewes. Lauren Witzke is a political activist from Delmar, who says her experiences being addicted to opioids and running drugs for Mexican drug cartels gave her perspective on how to fix the opioid crisis.

Two Republicans are facing off in the primary for a chance to run against incumbent Democrat Rep. Lisa Blunt Rochester, who is seeking her third term. Matthew Hathaway Morris, a Wilmington man who served a stint in prison for aggravated assault, says his life experiences give him perspective on the opioid epidemic and prison reform. Lee Murphy is a retired railroad worker and actor from Wilmington who has previously run for the house seat and other positions in Delaware.