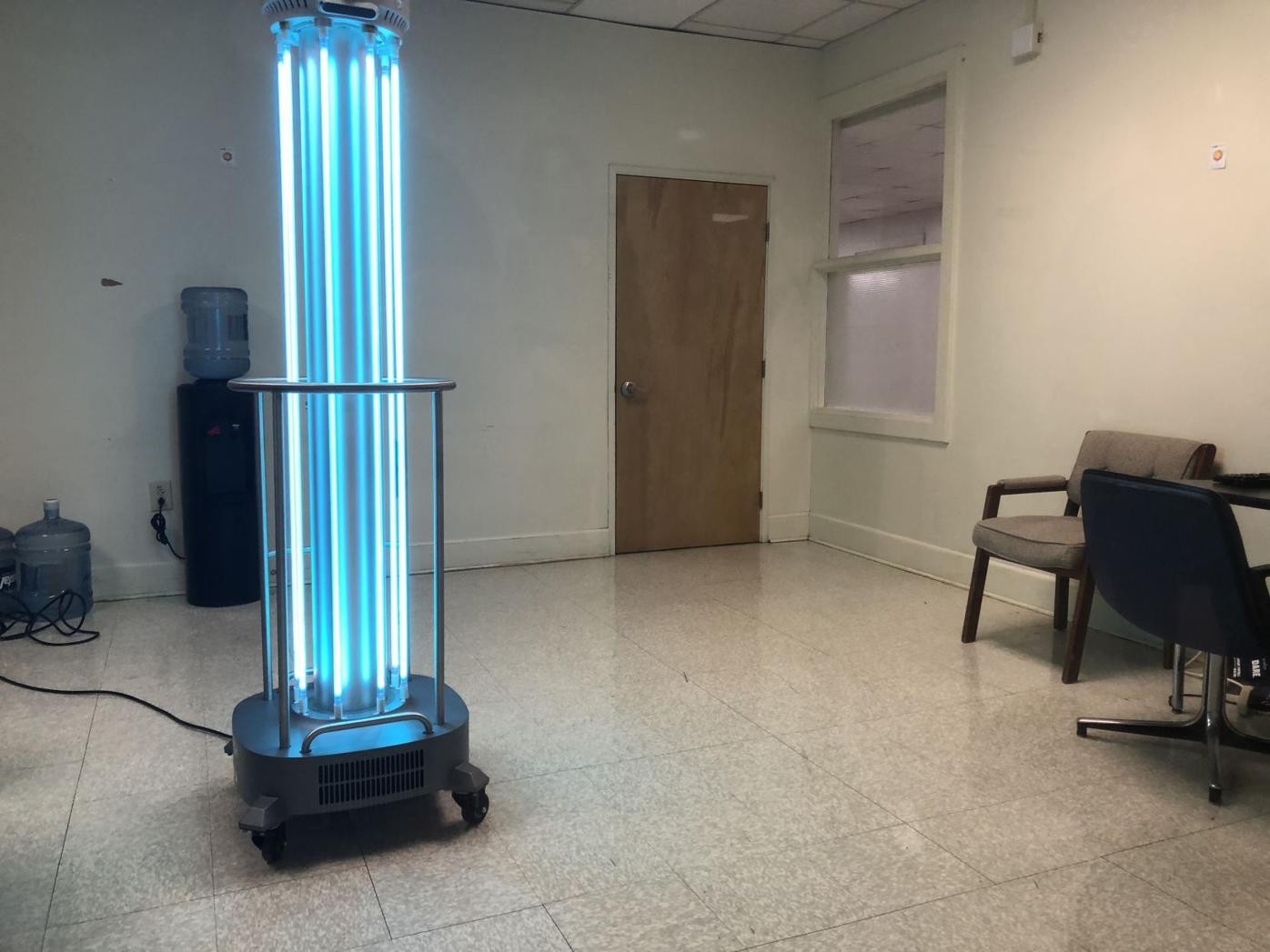 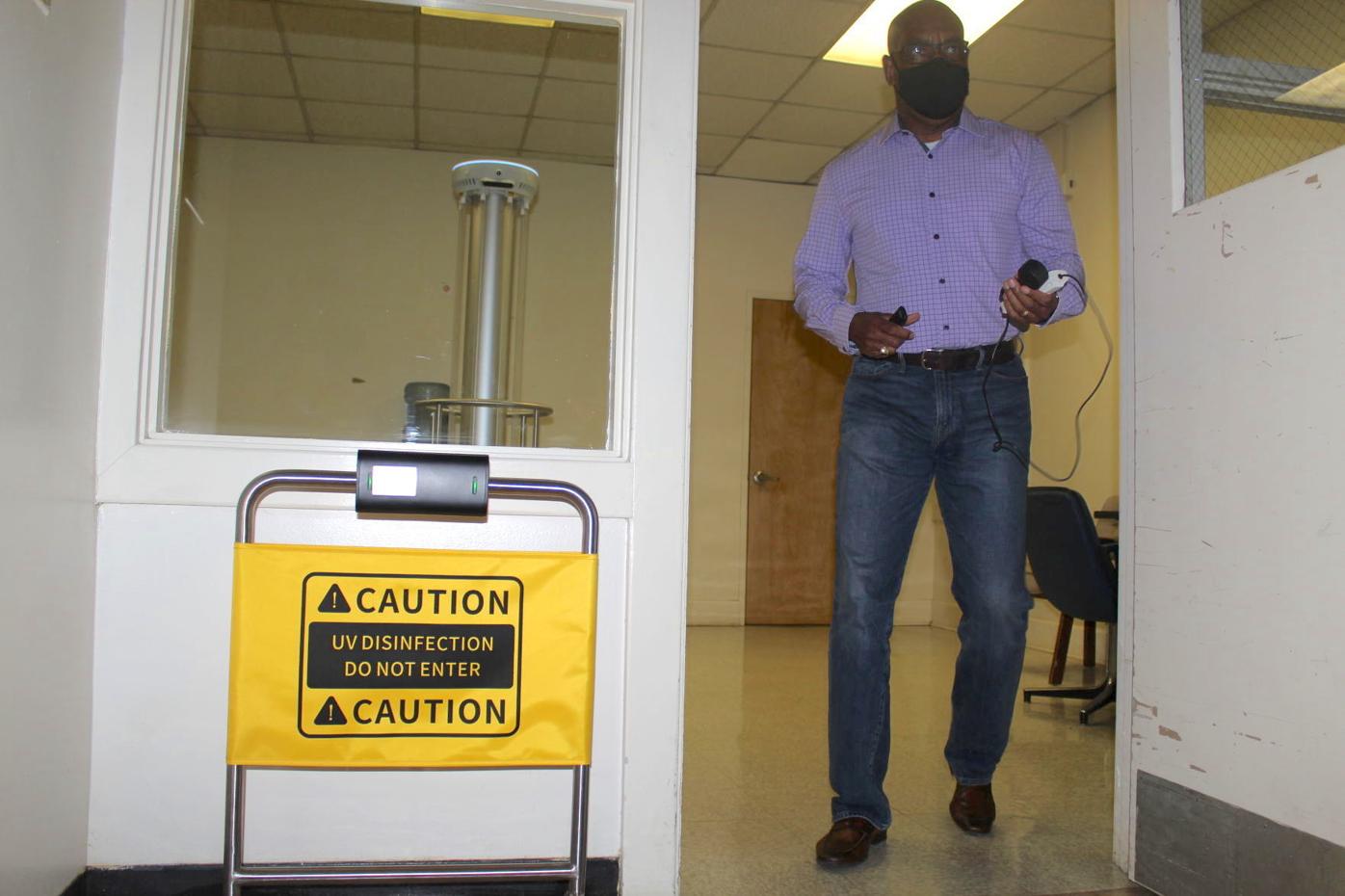 Greg Peel, managing partner at EclipXe Solutions, preforms a demonstration of the ADIBOT, a UV based disinfecting robot, to show Christina and state officials the potential of the technology.

Greg Peel, managing partner at EclipXe Solutions, preforms a demonstration of the ADIBOT, a UV based disinfecting robot, to show Christina and state officials the potential of the technology.

The Christina School District is now the first district in the nation to introduce the ADIBOT, an ultraviolet-light-based disinfection robot, in its schools.

The district used a donation from the Friends of Christina School District to purchase seven robots to help mitigate the spread of COVID-19. The robots were tested in a two-week pilot program at the Bancroft and Bayard schools in January.

Superintendent Dan Shelton said Christina was considering using UV technology, and the partnership with FOCSD gave the district the finances necessary to act on that desire. The robots play a different role from previous technologies Christina purchased, such as steronizers, as they kill germs on classroom surfaces rather than impact air quality.

Greg Peel, managing partner at EclipXe Solutions, which distributes the robots, said the 110-pound machine disinfects a room in minutes using eight UV lights. The technology is equipped with cameras and sensors for safety purposes – if someone walks into the room while the robot is on, it will automatically shut down. The machines are intended to be used by custodians to complement their regular cleaning.

“The grand scheme is to have them used every day in every classroom,” said Chris Sherlock, facilities manager for Christina. “With a three-minute disinfection time, if there is a positive case during the day, we can bring the machine in and disinfect that room immediately.”

UV light has been used as a disinfectant since the early 20th century and works by disrupting the DNA of microbes. ADIBOTs use UV-C light, as it has the shortest wavelength and strongest germicidal effect.

The ADIBOTs will be distributed to the Christina Early Education Center, Stubbs Early Education Center, Gallaher Elementary School, The Brennen School and Kirk Middle School along with the pilot schools of Bayard and Bancroft. CSD chose the schools because of either high-risk populations, high infection rates and the presence of COVID-19 testing sites.

“Our goal is to keep our classrooms open for face-to-face learning,” Delaware Secretary of Education Susan Bunting said. “This technology adds another layer of protection to keep students and staff safe against COVID-19.”

FOCSD member Mary Schorse said the $145,000 grant came from federal CARES Act funding. The school district itself has received CARES Act money, but FOCSD was able to tap into a pool of money reserved for Delaware nonprofits through a grant program administered by the Delaware Community Foundation.

Another part of the grant went toward buying headsets that teachers can use for virtual classes. FOCSD previously received a $5,000 grant through CARES that went towards masks and other supplies.

“I think this extra level of cleanliness gives teachers a greater peace of mind and lets them focus on their job,” Schorse said.

James Simmons, chief equity officer for the Delaware Department of Education, helped spearhead the acquisition of the robots. He emphasized that poor and minority students are disproportionately impacted by disengagement caused by virtual learning. He said the extra layer of protection provided by the robots will help ensure parents that their children are safe and hopefully encourage more students to return to school.

“It gives them something above and beyond what they’re currently getting to increase their comfort level to come back to school,” Simmons said.