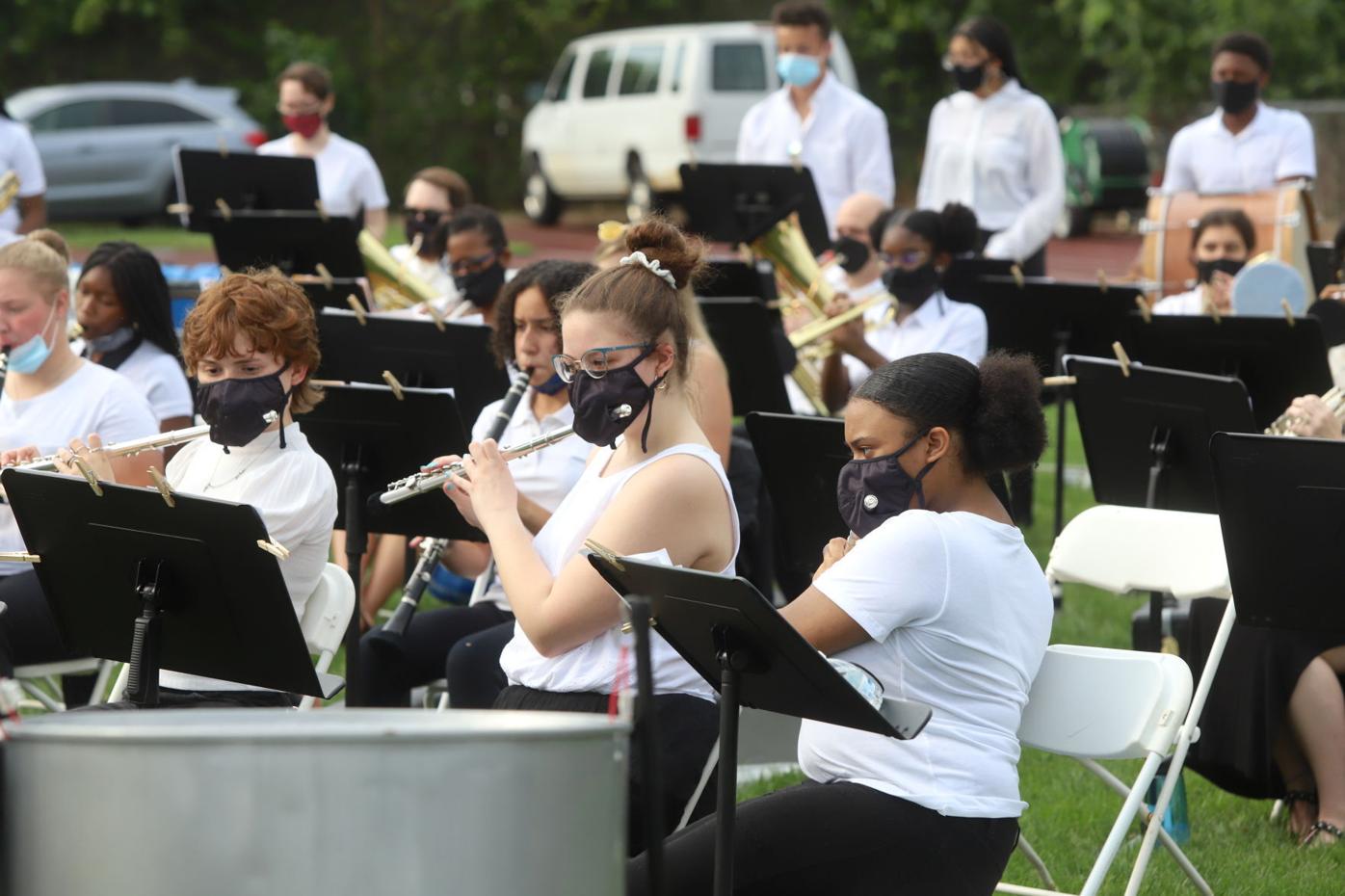 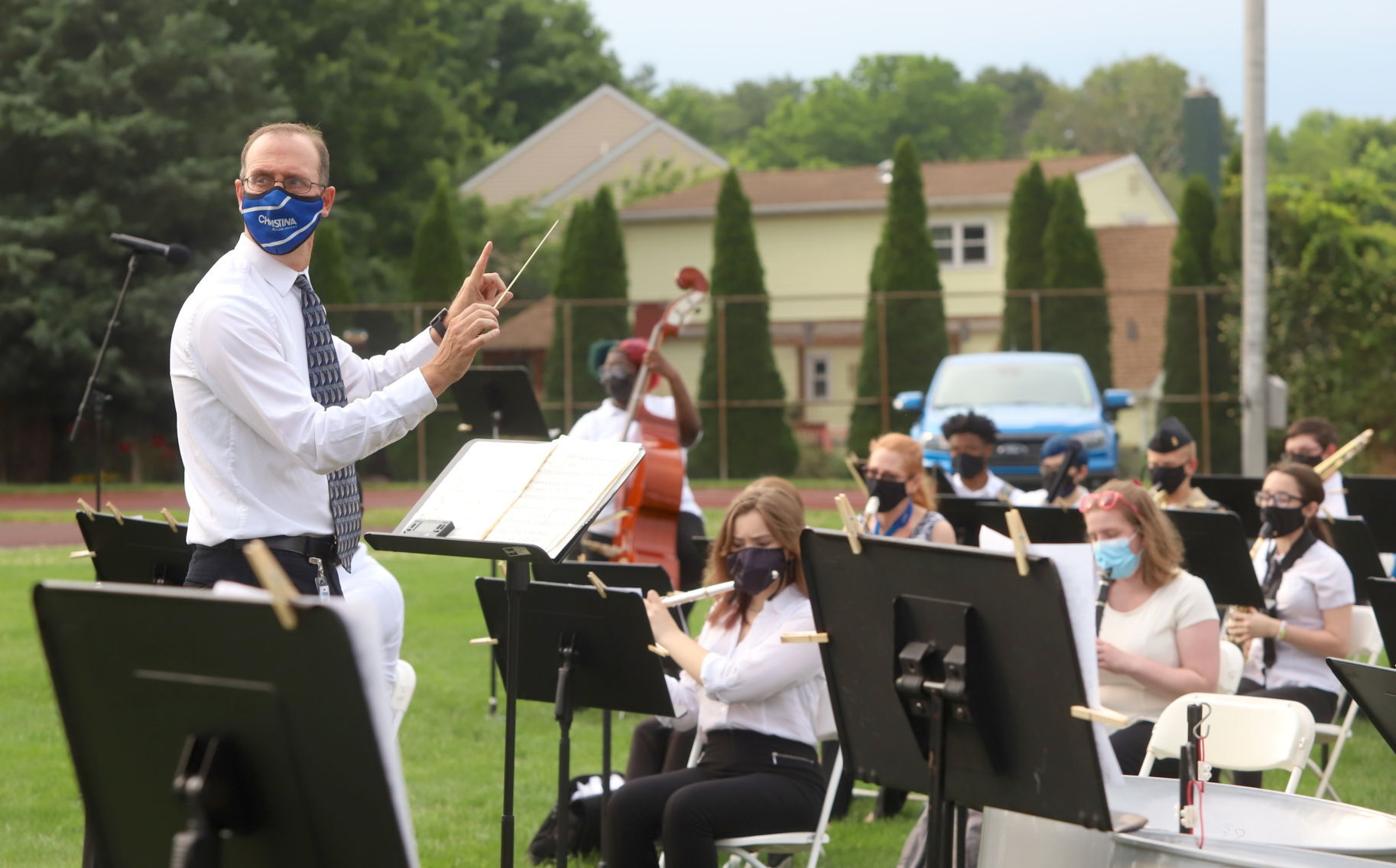 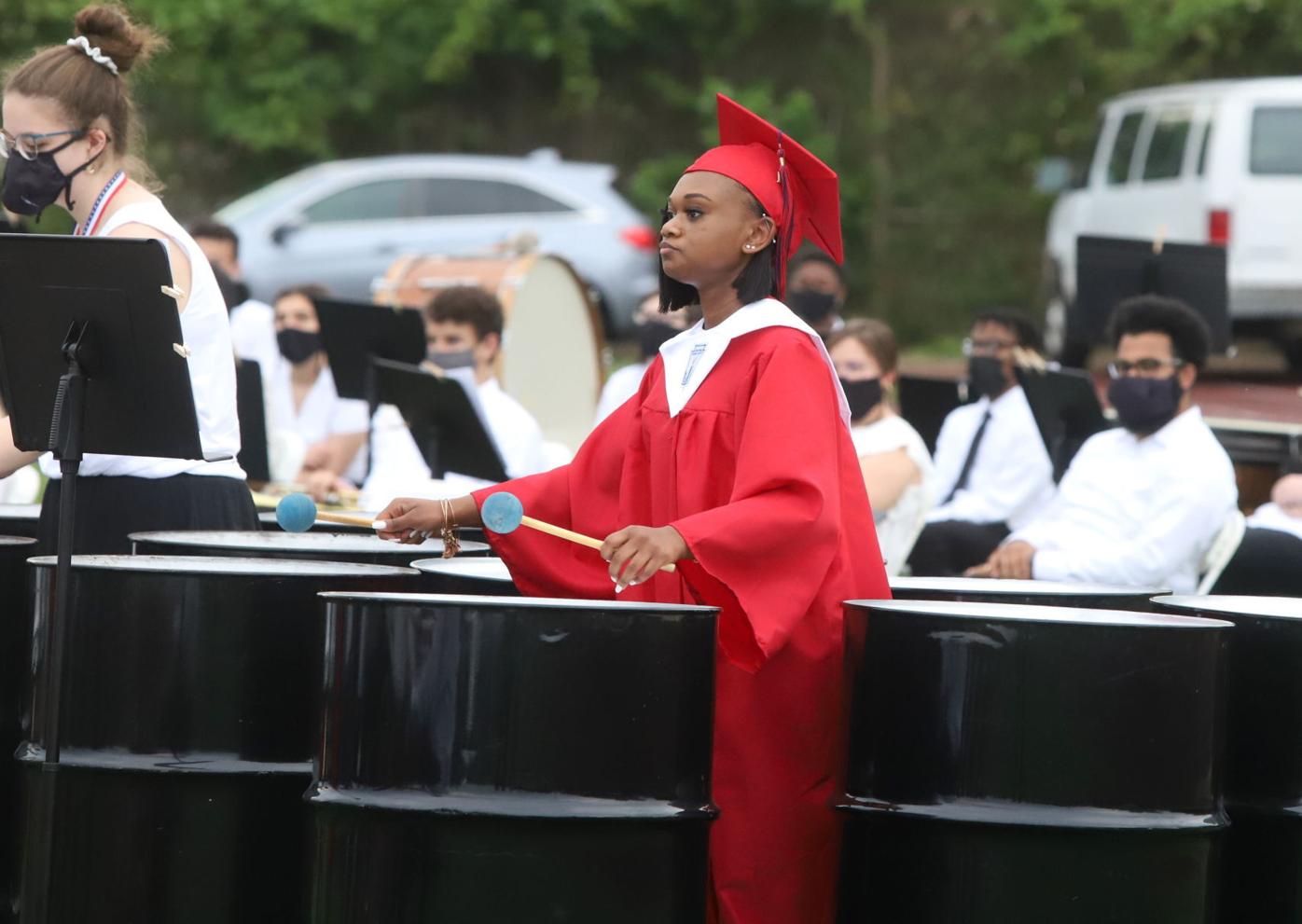 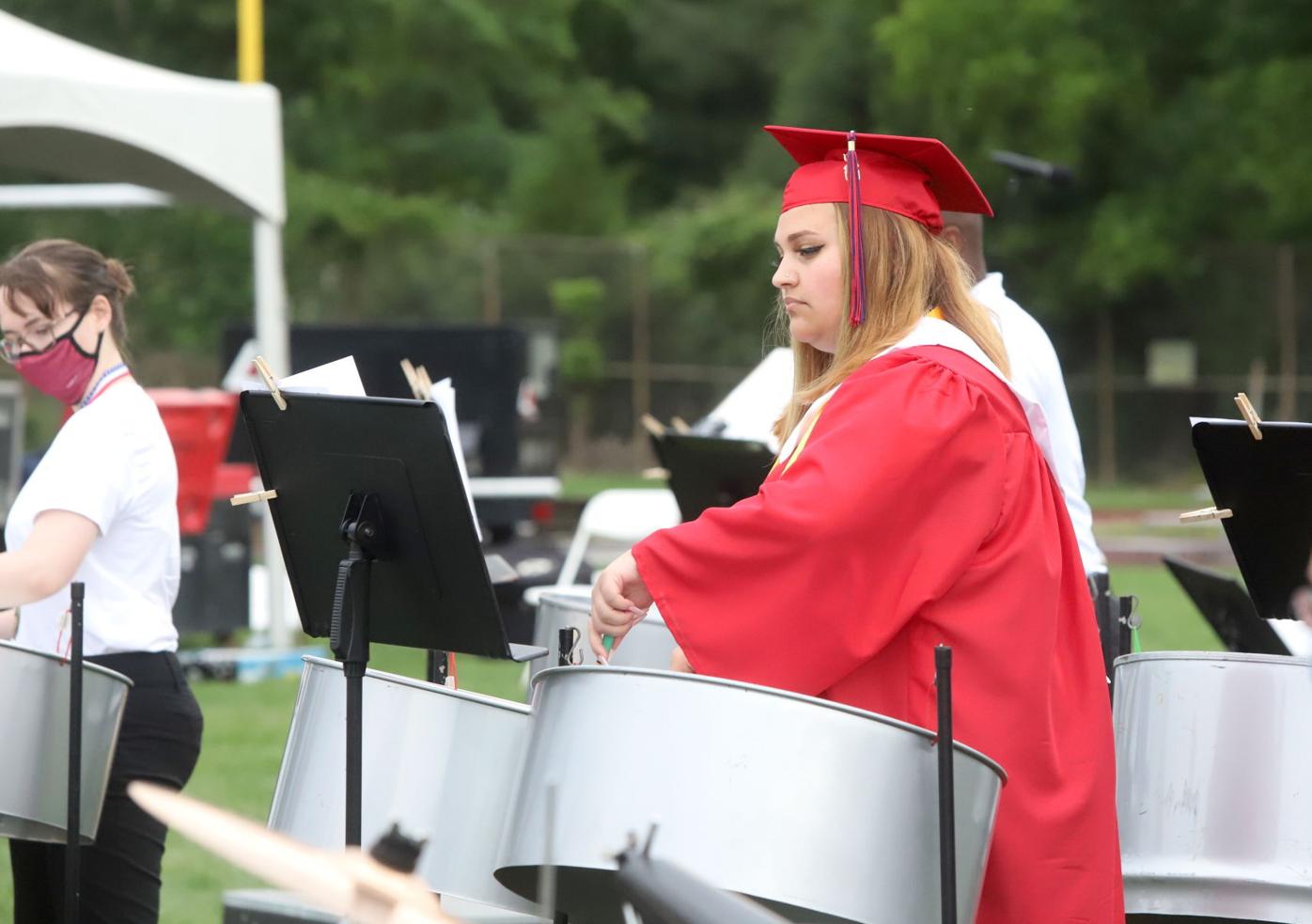 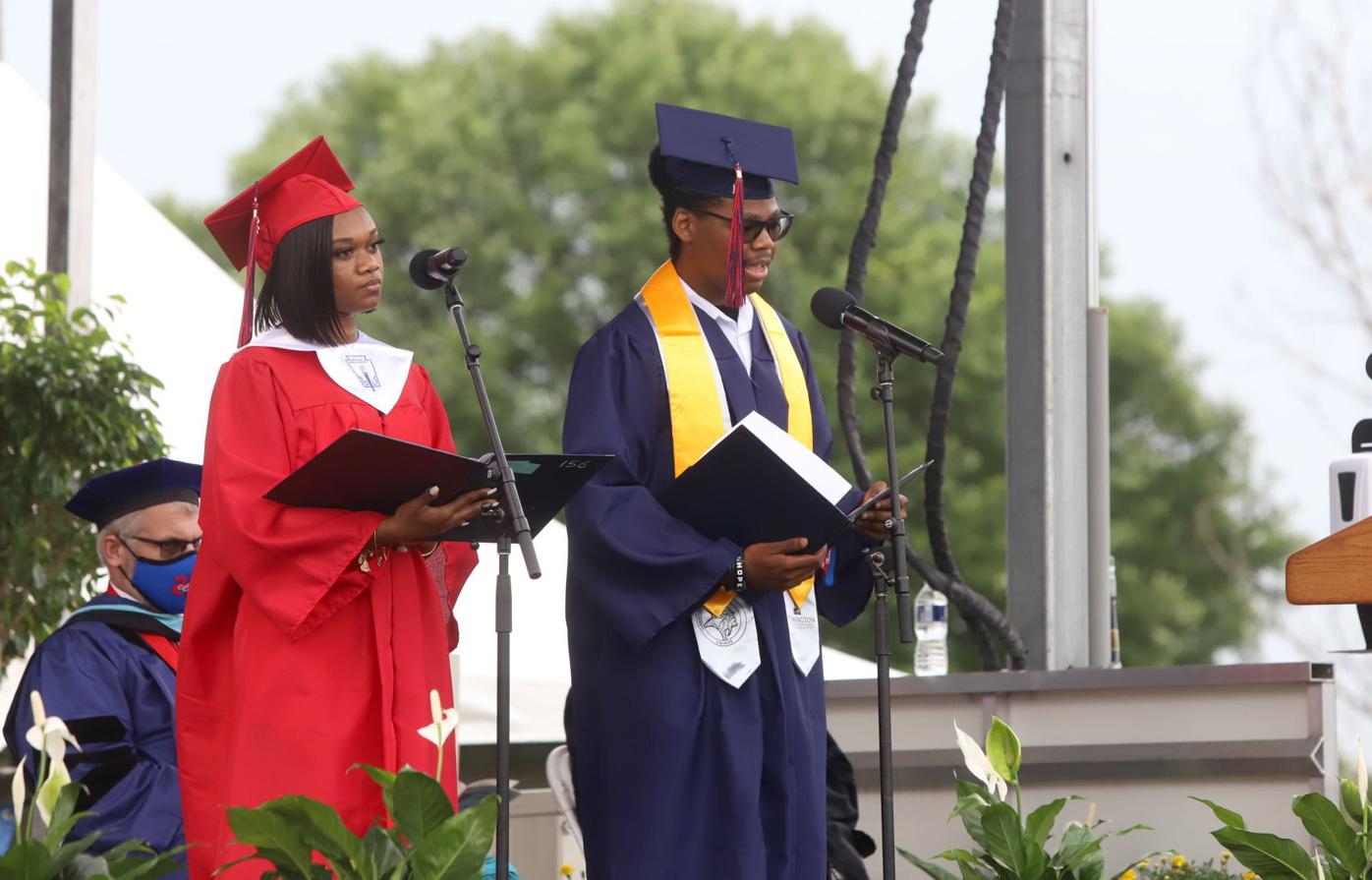 The jazz combo presented its reading of standards before the ceremony began, and then the concert band, with only one combined full rehearsal two nights before graduation, serenaded the graduates as they marched onto the Glasgow High School football field.

Christiana band director Jeffrey Dombchik had to host many of his ensemble classes virtually when the pandemic hit. Because they could not practice, students would critically listen to other groups, paying attention to dynamics and other elements that they could apply to their own performances.

“I don’t think everybody understood what this really was,” Dombchik recalled last month, referring to the beginning of the pandemic in spring 2020. “We thought we were going to be shut down for two weeks, that we’re going to be able to play and kind of figure it out.”

Dombchik emphasized the role of student leaders, as they took ownership of their education during the virtual period. Along with full virtual classes, Dombchik used online breakout rooms based on instruments to teach students their individual parts.

The first piece the Christiana band played in the spring was a “body percussion” piece, with the band playing separate rhythm parts through snapping, clapping and other techniques. That practice proved essential for the band members, as they were able to practice listening to their classmates after practicing alone for so long before once again picking up their instruments.

This spring, Dombchik began using bell covers, instrument jackets, special masks and other protective equipment to enable the ensembles to practice in person.

He said that practicing with PPE enabled students to relearn how to listen to others and allowed teachers to give instant feedback on their performance.

“Already just in the few weeks that we played together in person, it has been really exciting to see and hear the kids,” Dombchik said. “I can see in their faces that they’re really excited about what we’re doing.”

At the graduation, a vocal quartet of two seniors, Destiny Brown and Joseph Raymond and two juniors Tomiwa DaSilva and Sabrina Richards, sang the national anthem. Brown and Raymond also sang “This is Me/You will be Found,” a mashup of musical pieces from “The Greatest Showman” and “Dear Evan Hansen,” accompanied by the faculty chamber ensemble.

Dombchik himself preformed piano music while each graduate’s name was announced. The finale of the graduation ceremony featured the steel drum ensemble performing the jazz standard “St. Thomas” by Sonny Rollins.

“I really wanted to make sure we gave the class of 2021 the proper send off, as well as a chance for a few of last year’s senior class to come back and have the experience they did not experience last year,” Dombchik said. “The collaboration and cooperation across the CHS community was something very special.”