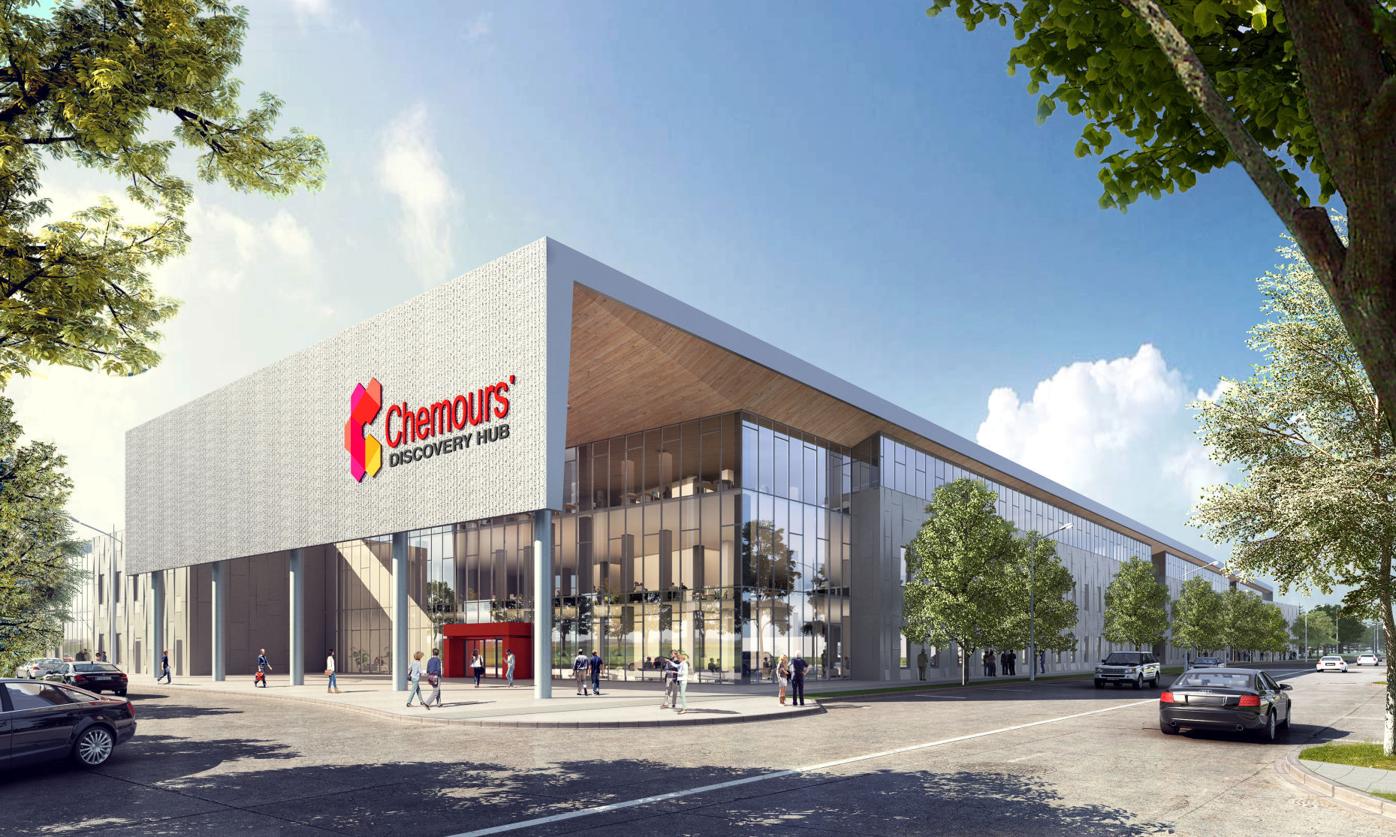 An artist’s rendering shows the 312,000-square-foot research and development headquarters Chemours is building on the University of Delaware’s STAR Campus. 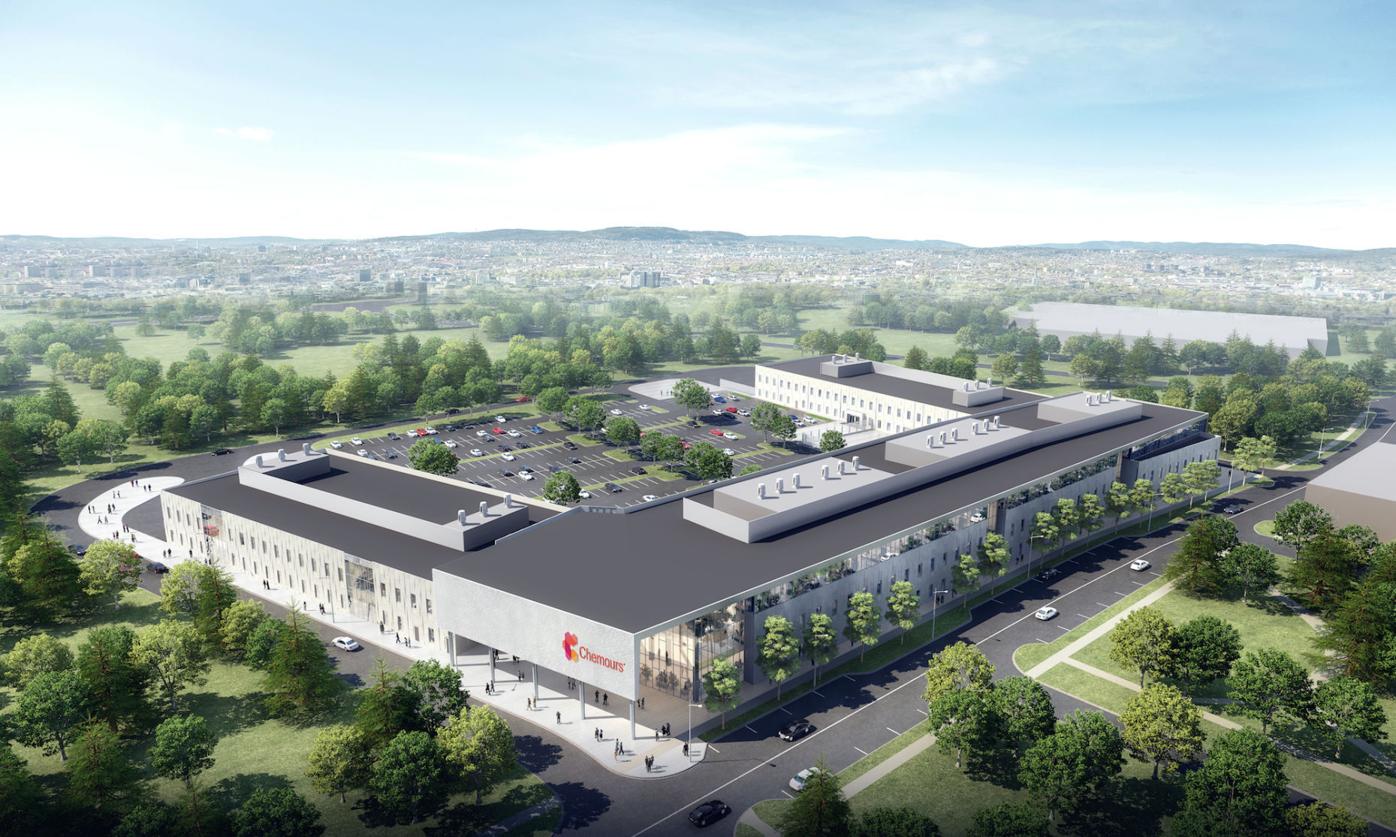 An artist's rendering shows the 312,000-square-foot research and development headquarters Chemours is building on the University of Delaware's STAR Campus. 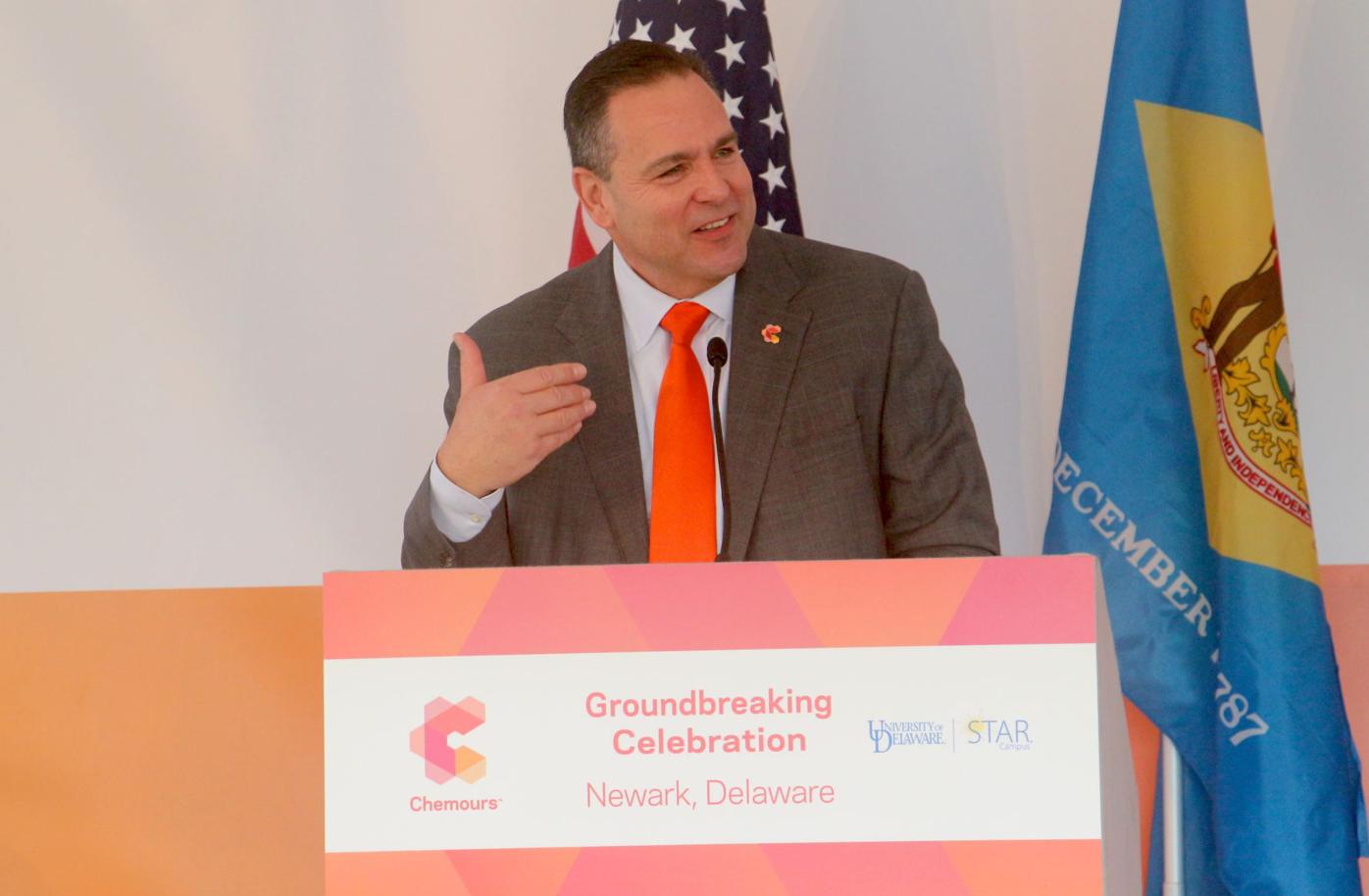 Chemours CEO Mark Vergnano speaks Monday at a groundbreaking ceremony for the Chemours Discovery Hub on the STAR Campus. 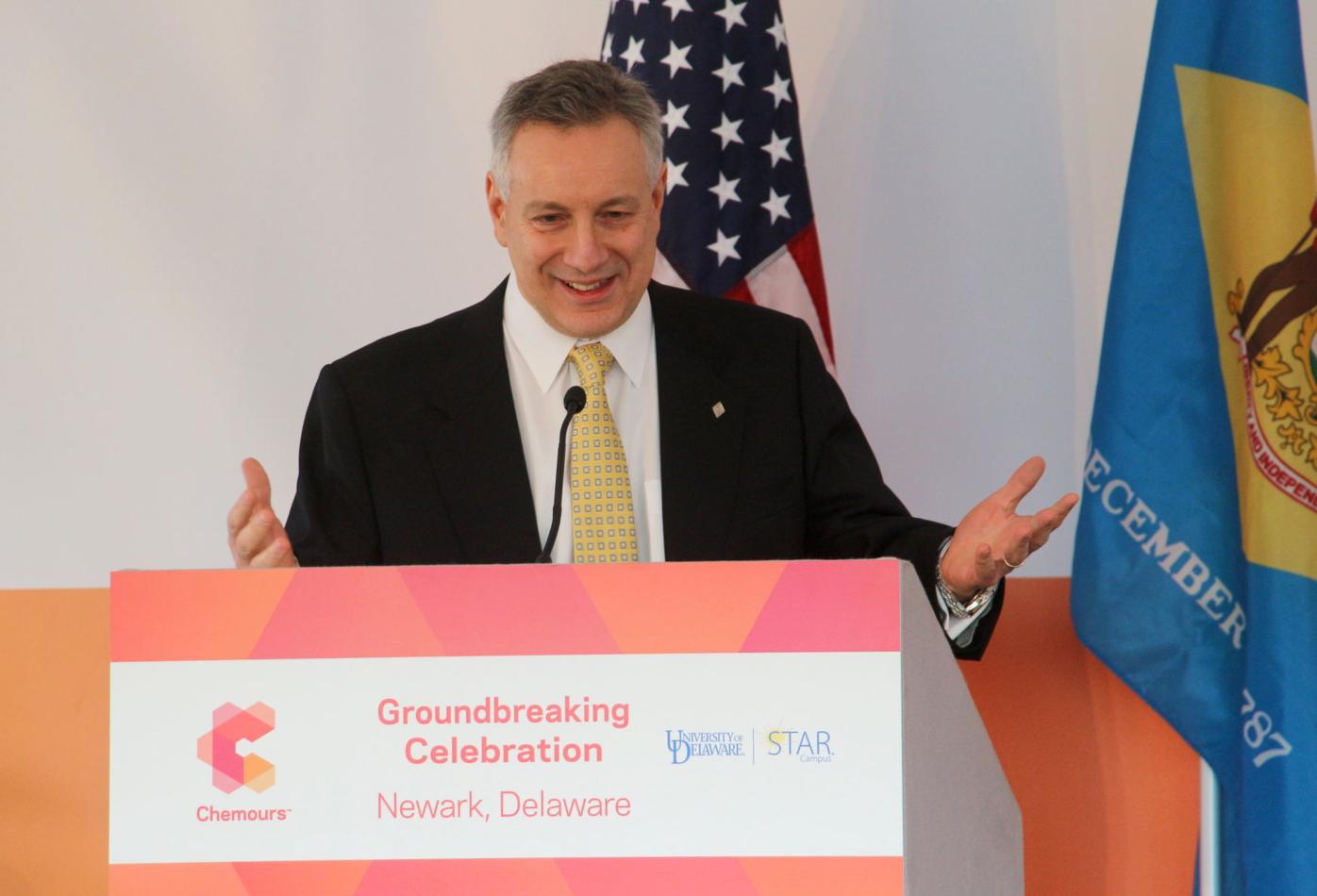 University of Delaware President Dennis Assanis speaks Monday at a groundbreaking ceremony for the Chemours Discovery Hub on the STAR Campus. 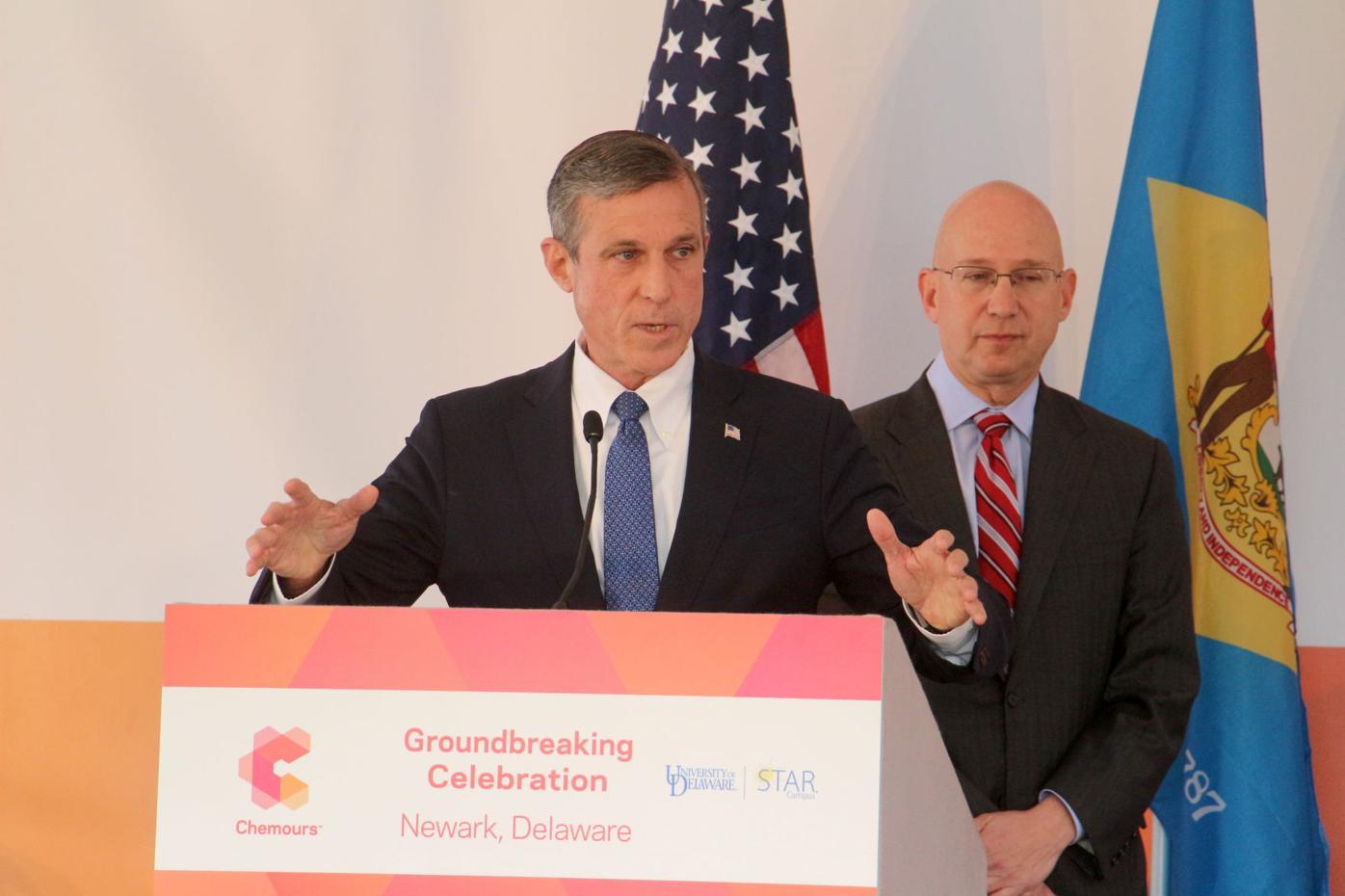 Gov John Carney speaks Monday at a groundbreaking ceremony for the Chemours Discovery Hub on the STAR Campus. 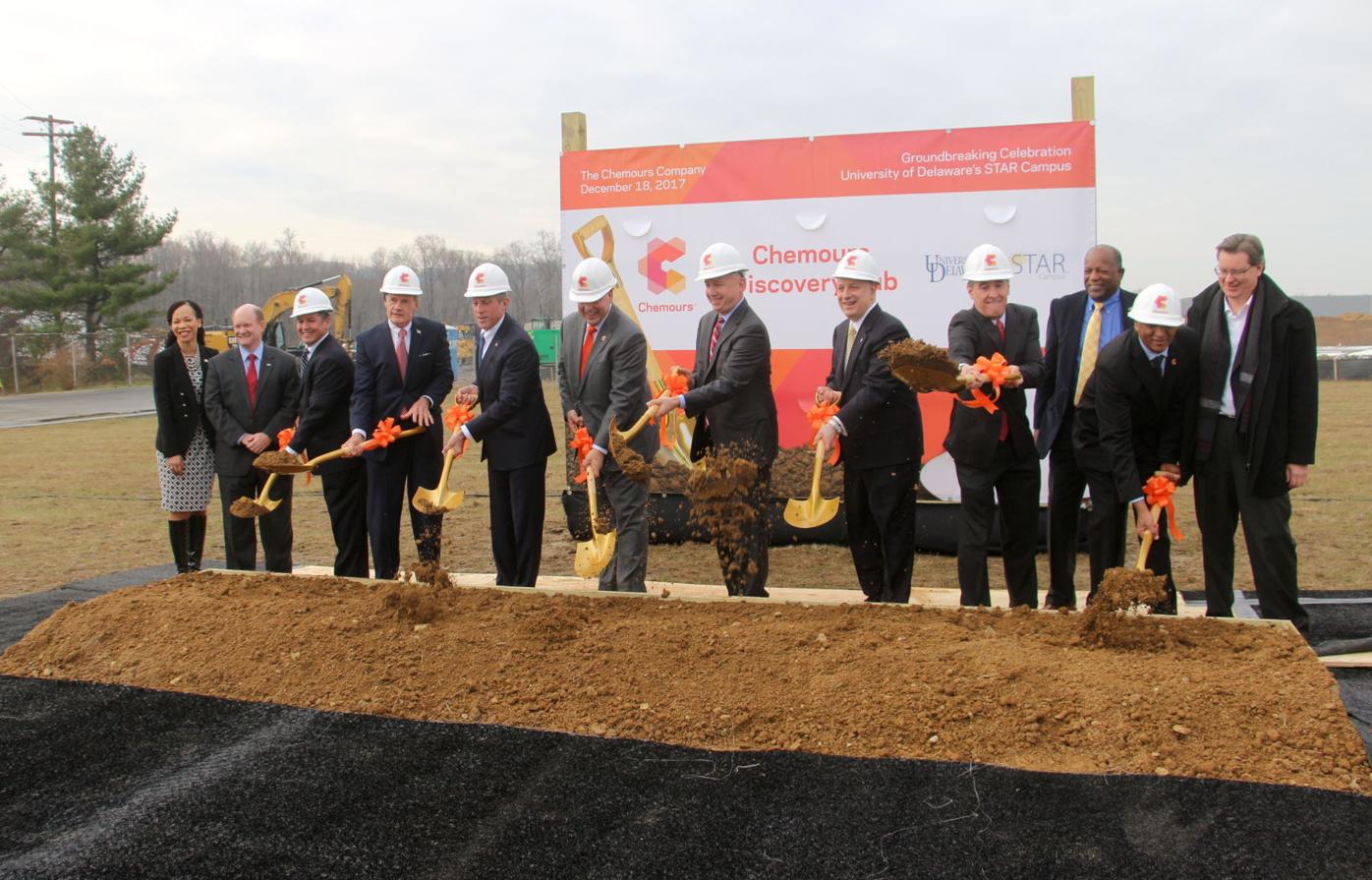 Officials break ground on the Chemours Discovery Hub on the STAR Campus.

An artist’s rendering shows the 312,000-square-foot research and development headquarters Chemours is building on the University of Delaware’s STAR Campus.

An artist's rendering shows the 312,000-square-foot research and development headquarters Chemours is building on the University of Delaware's STAR Campus.

Chemours CEO Mark Vergnano speaks Monday at a groundbreaking ceremony for the Chemours Discovery Hub on the STAR Campus.

University of Delaware President Dennis Assanis speaks Monday at a groundbreaking ceremony for the Chemours Discovery Hub on the STAR Campus.

Gov John Carney speaks Monday at a groundbreaking ceremony for the Chemours Discovery Hub on the STAR Campus.

Officials break ground on the Chemours Discovery Hub on the STAR Campus.

Chemours officially broke ground Monday on a $150 million research and development headquarters that will bring more than 300 jobs to the University of Delaware’s STAR Campus.

First announced in October, the 312,000-square-foot Chemours Discovery Hub is expected to open in early 2020.

“This is much more than a brick-and-mortar story; it’s about the discoveries to come that just might change or at least shape the future,” Chemours CEO Mark Vergnano said. “The Chemours Discovery Hub will serve as a gathering place — a center for activity where vision, ambition, intelligence and creative energy will flourish — not just for years, but for decades to come.”

The facility, which will house laboratories and some office space, will employ approximately 325 scientists and other personnel, all of whom will be relocated from more than a dozen other Chemours facilities in New Castle County.

While the new headquarters won’t create additional jobs right away, Vergnano said the company has plenty of room to expand.

“The whole idea here is for us to grow,” he said. “I believe there will be new jobs over time.”

For now, the benefit of the new building is the ability to bring together scientists who are currently spread out among a number of other sites.

“By bringing our scientists and engineers together in one location, we can make our efforts more efficient, more productive and, above all, I hope more fun as well, as we interact more in person,” said Zeru Tekie, who heads Chemours’ fluoroproducts division.

According to public records, the company inked a 75-year ground lease with UD for a 15.2-acre, pentagonal plot of land in the southeast corner of the 272-acre STAR Campus. That area was designated as “future development” in UD’s 2014 master plan, which called for turning STAR into an urban-inspired campus centered around a new transportation hub and featuring research and development space surrounded by parks, restaurants, residential units, retail stores and a hotel.

Chemours will be situated in close proximity to Bloom Energy, which opened in 2013 as the first private company to locate on the STAR Campus.

Formerly the site of the Chrysler assembly plant, STAR also includes the UD health sciences complex, the technology company SevOne and a business incubator. A 10-story tower, which will house part of the health science program as well as several undisclosed commercial tenants, is slated to open next summer. In October, UD broke ground on a six-story, $156 million biopharmaceutical building.

Under the terms of the deal, Chemours paid UD $4.6 million to lease the land, a UD spokeswoman confirmed. Chemours will pay UD an additional $4 million over five years as part of a research agreement, in which faculty and students will do work for Chemours.

“This is a big deal for the University of Delaware and our state,” UD President Dennis Assanis said. “They’re going to be part of a neighborhood, an ecosystem of researchers, educators, innovators and entrepreneurs. We’re going to create the future of our state here and we’re going to be a major force in the mid-Atlantic region for job creation and for wealth generation for our society.”

Assanis said the deal came together quickly after he and Vergnano discussed a possible collaboration approximately six months ago.

Like any good relationship, it’s all about chemistry, he joked.

“From the moment I met Mark, I knew there was great chemistry,” he said.

Vergnano said he hopes to create a “pipeline” from UD, in which students intern for Chemours while studying at the university and then go on to be hired fulltime.

Kevin Leary, who heads Chemours’ titanium technologies division, said the proximity to UD is crucial for attracting young, innovative talent to the company.

“Our success is rooted in new generations building on the work and wisdom of those that came before them,” Leary said. “With that in mind, this facility and this partnership will be a magnet to attract talent not just from the greater Philadelphia area but from across the country and around the world.”

Headquartered in Wilmington, Chemours was founded in 2015 when DuPont spun-off its performance chemicals division. With 7,000 employees worldwide, the company’s flagship products include brands such as Teflon, Ti-Pure, Krytox, Viton, Opteon, Freon and Nafion.

“A lot of people looked at Chemours when DuPont spun them off three years ago, and a lot of the skeptics said Chemours ain’t gonna make it,” Carper said. “Lo and behold, Mark Vergnano, the CEO, has provided great leadership.”

“The wonderful thing about this investment is that this will foster more innovation and it will lead to the introduction of technologies that can be commercialized and turned into economic opportunity and job creation,” he added.