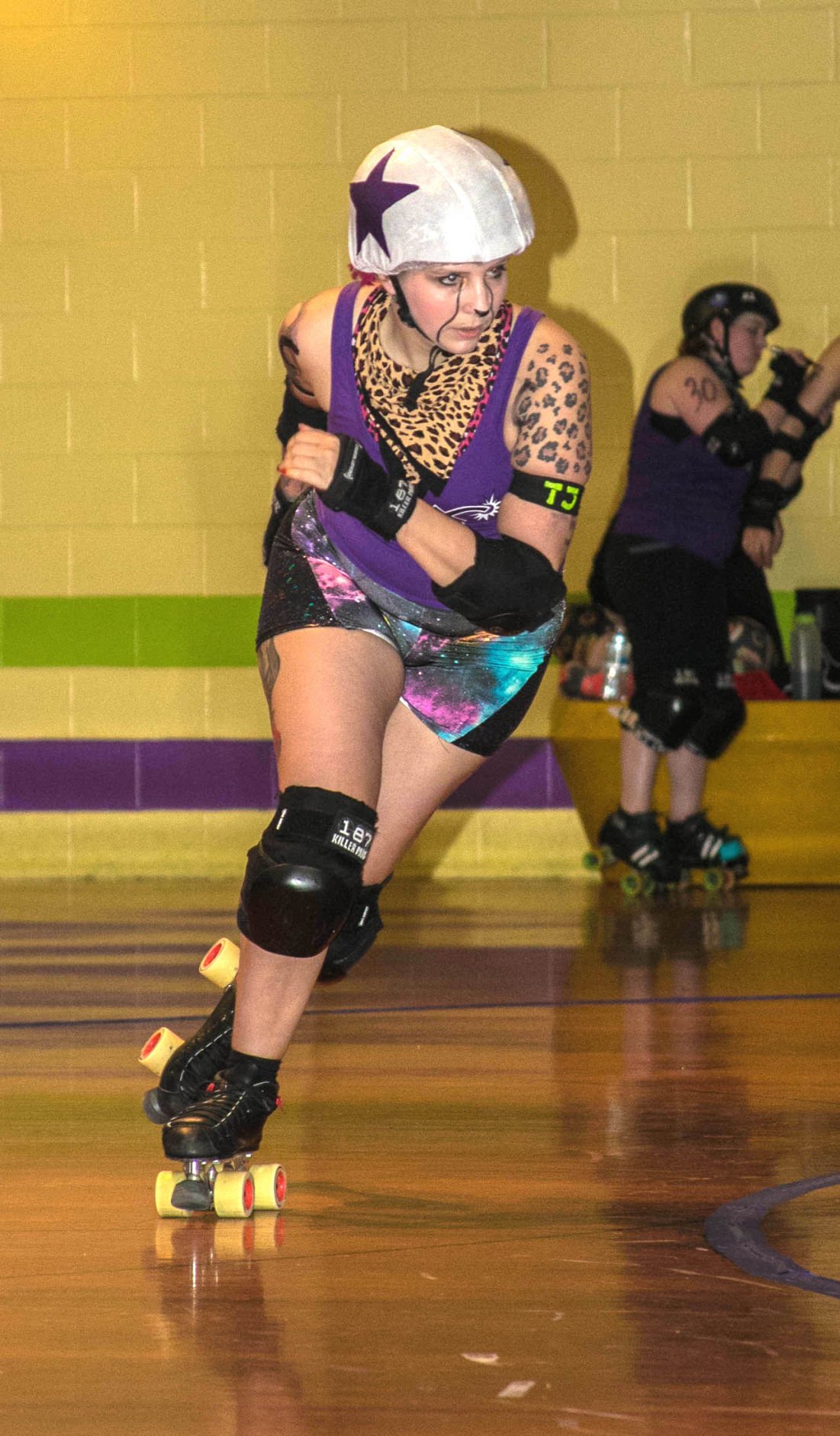 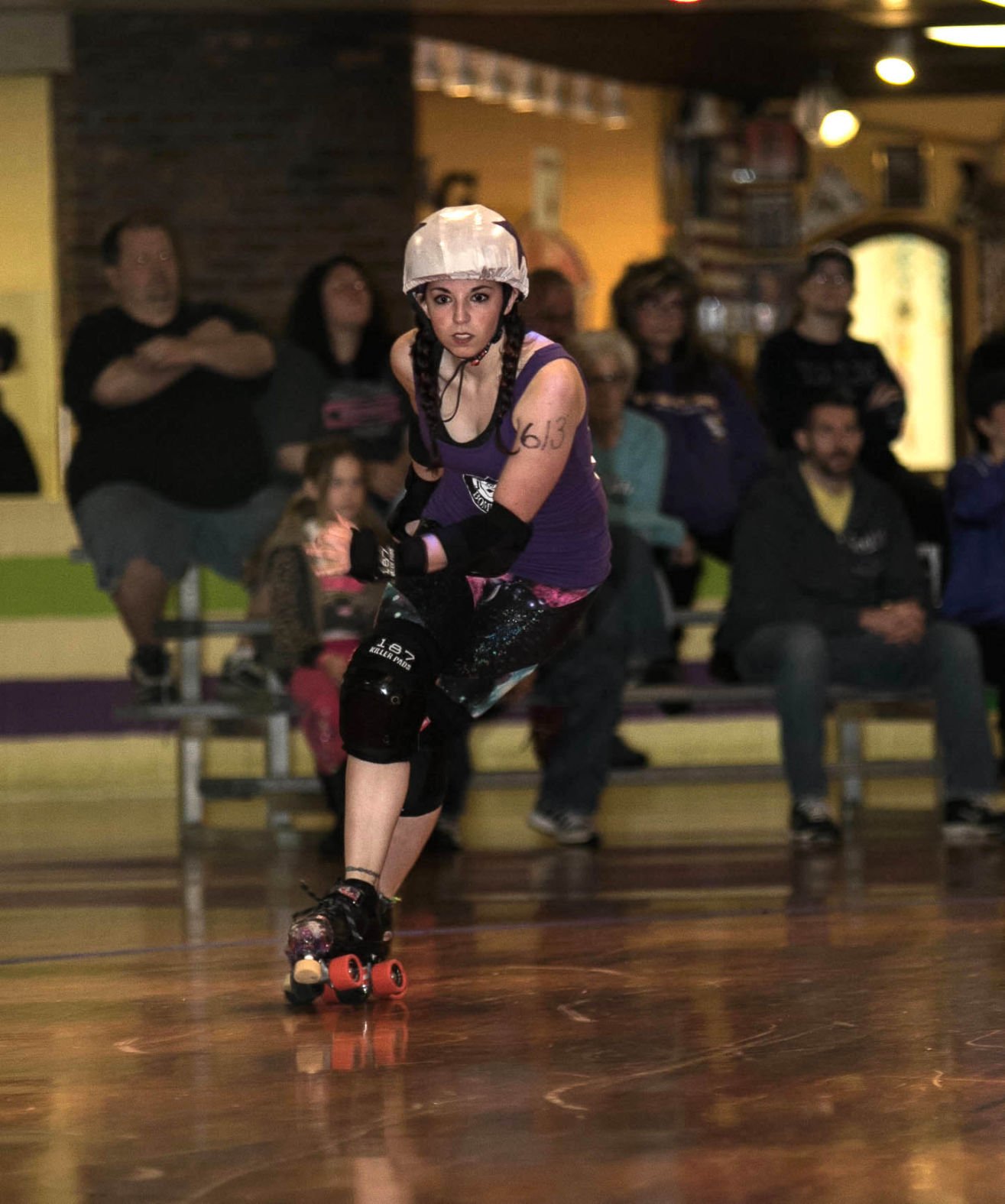 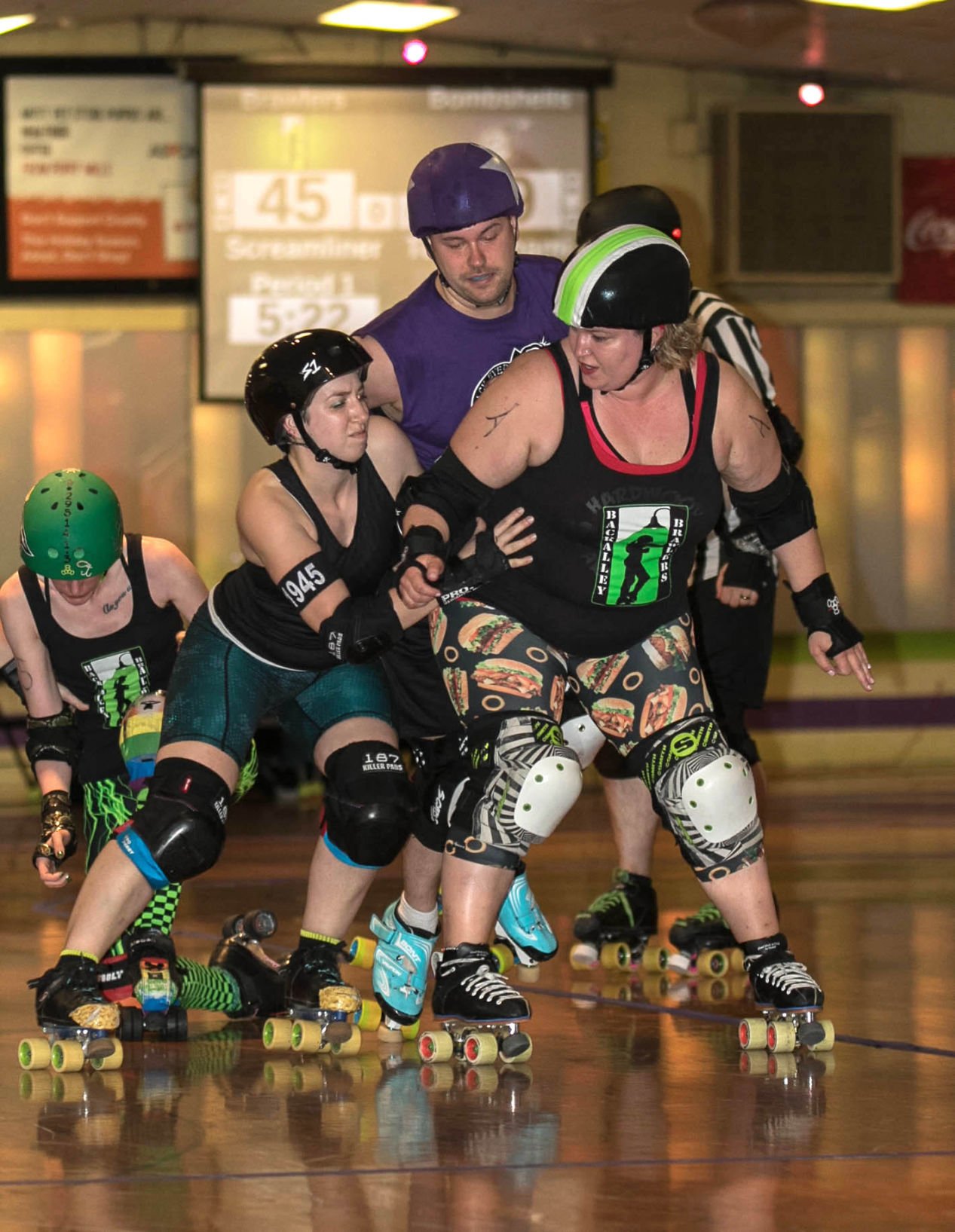 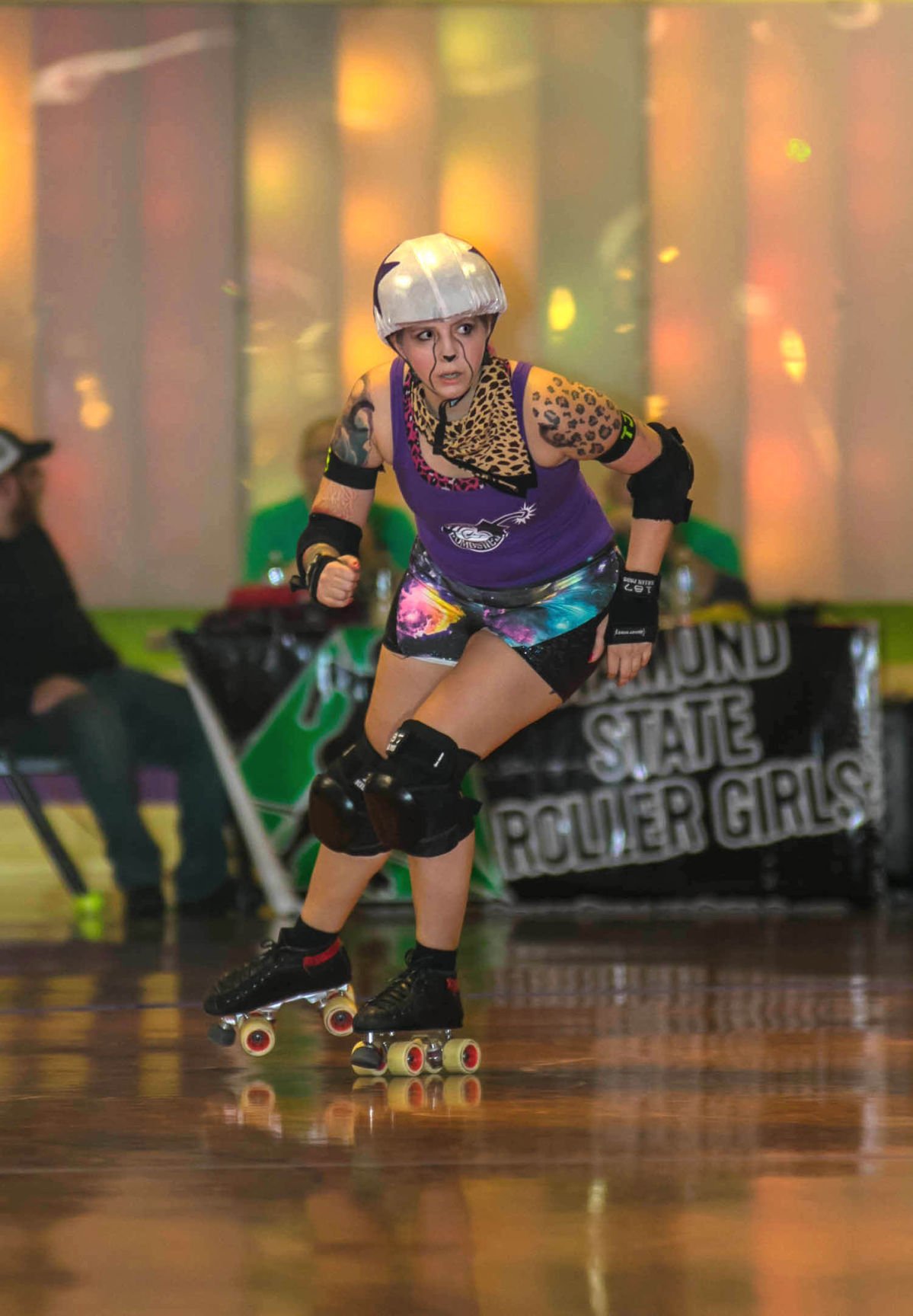 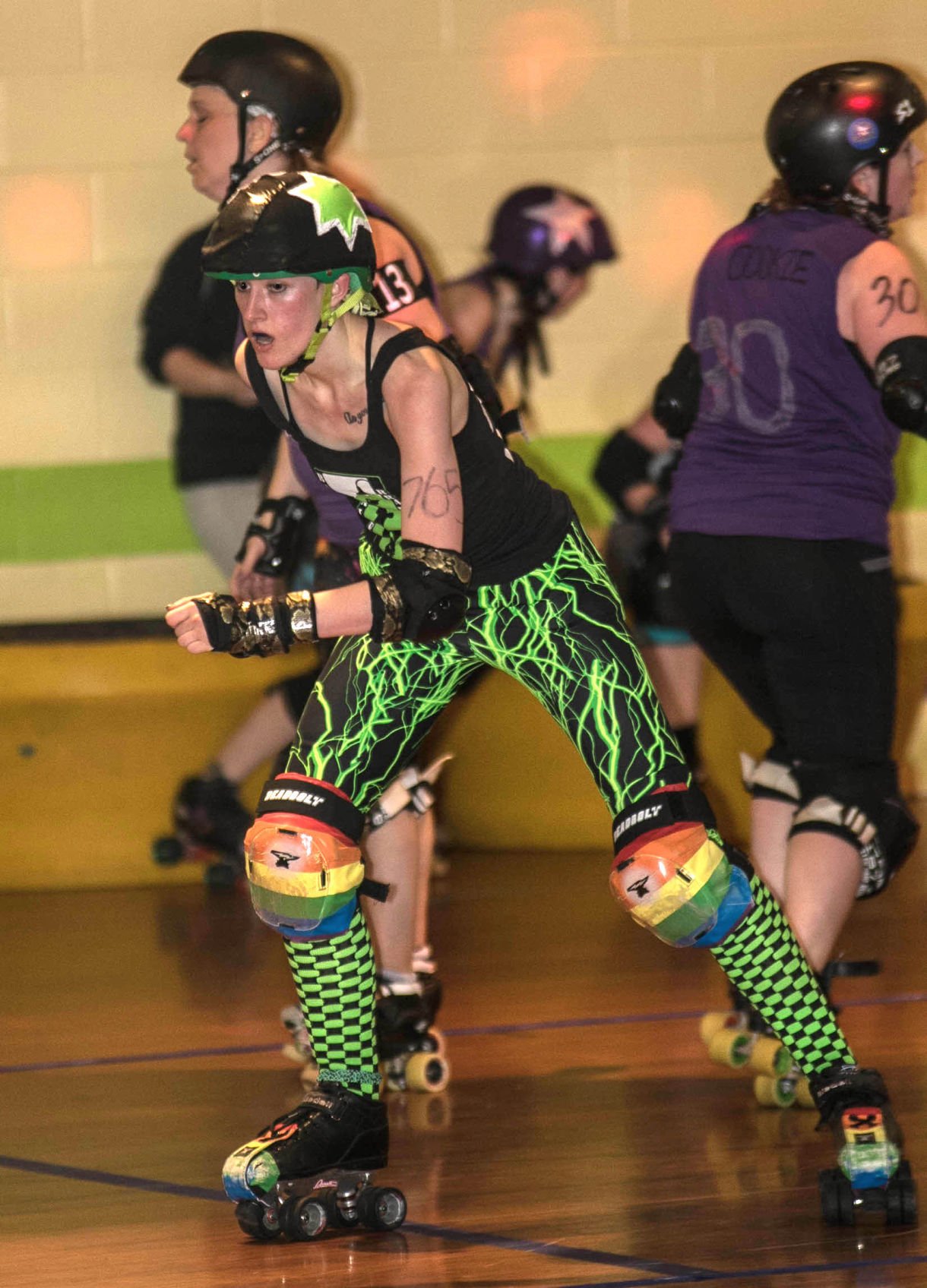 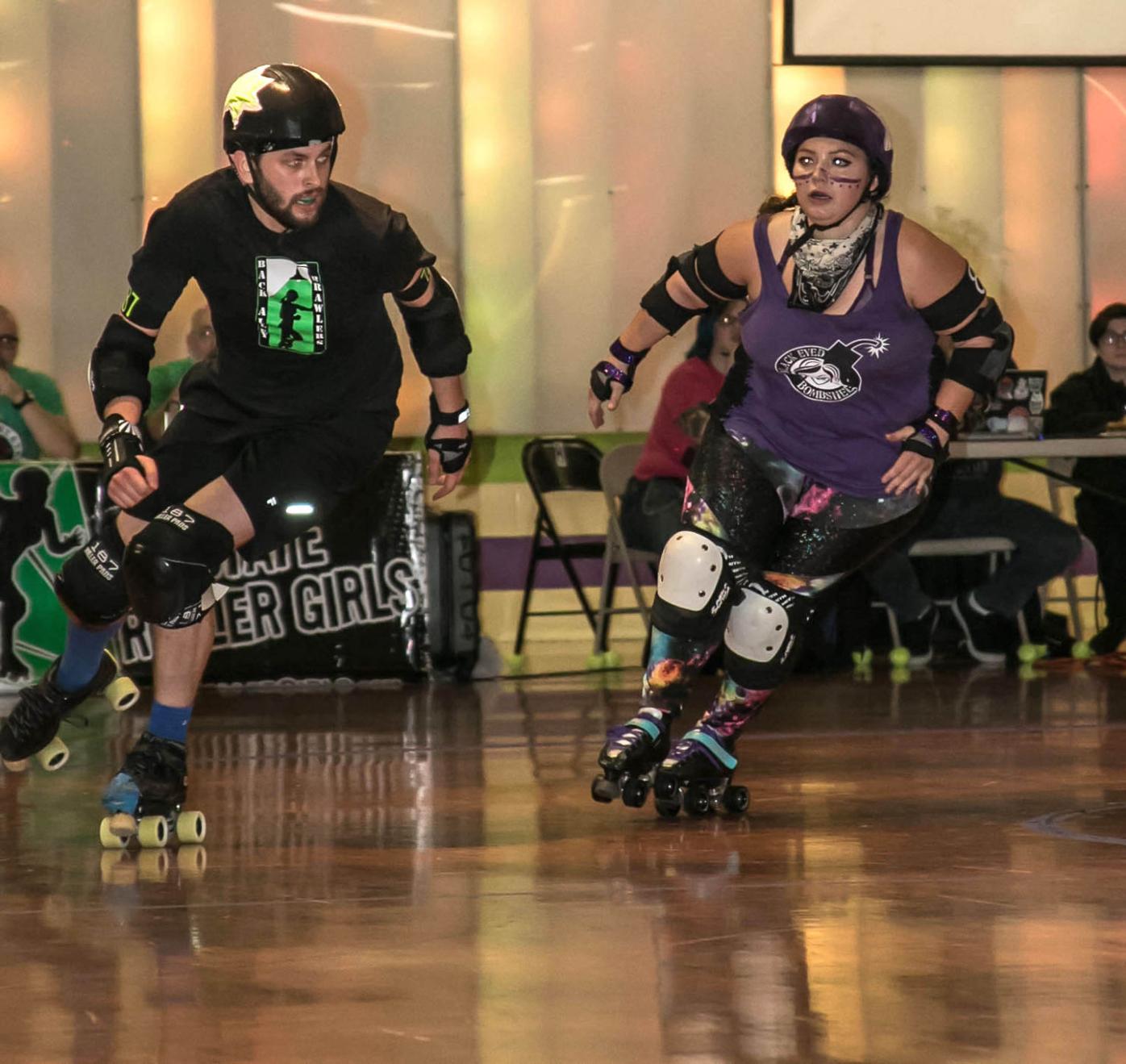 Diamond State Roller Derby skaters “Screamliner” and “Copa KaBangYa” make their way around the track during a bout last month at the Christiana Skating Center. 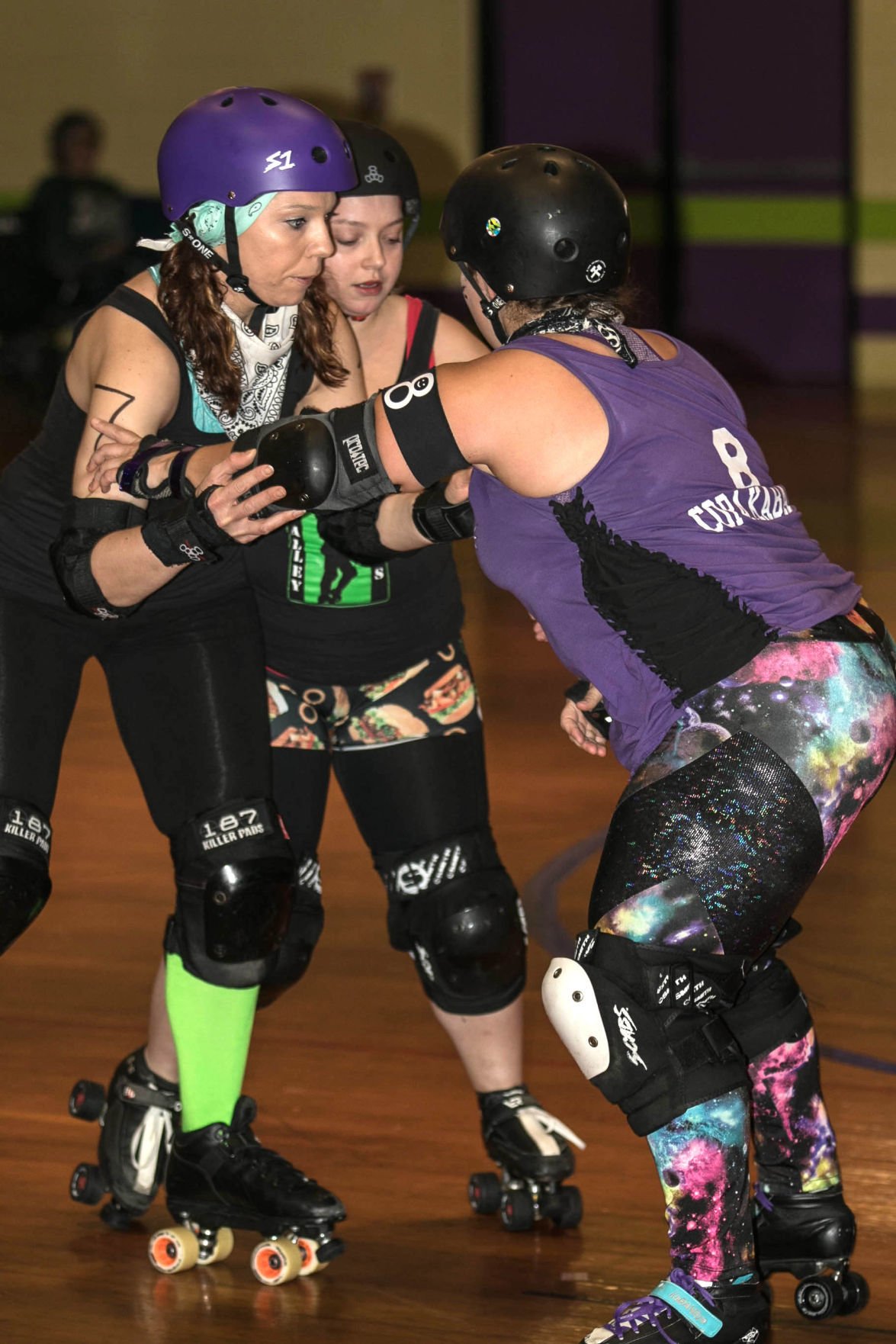 Diamond State Roller Derby skaters “Screamliner” and “Copa KaBangYa” make their way around the track during a bout last month at the Christiana Skating Center.

Delaware may be known as a small wonder, but here, roller derby skaters are delivering big hits.

“Nobody is physically-inclined to be a derby skater,” she said. “But at the same time, derby’s not for everyone. It’s full contact and you can get hurt. It’s also the most fun I’ve ever had.”

Last month, the Diamond State Roller Derby celebrated its 10-year anniversary. It was started in March 2006 by local skaters under the name Wilmington City Ruff Rollers and was the first all-female, skater-owned-and-operated flat track roller derby league in Delaware.

Today, the league is made up of three home teams – the Hardwood Heartbreakers, the Back Alley Brawlers and the Blackeyed Bombshells – that participate in recreational bouts, as well as one all-star travel team, which represents the league as the Diamond State Roller Girls and competes against other teams in the region.

Carbone, who lives in Newark, skates with the Blackeyed Bombshells under the name “Violent Stems.” Last year, she was on the DSRD all-star team.

She explained that derby is played on a flat, oval-shaped track with five players per team, including four blockers and a jammer. The blockers are both offense and defense, and the jammers score the points.

Blockers skate together to create what is called a pack and try to stop the jammer from the opposite team from breaking through the pack. Meanwhile, they also have to help their own jammer get through, which Carbone said tends to get pretty rough.

“It’s full contact, definitely,” she said. “It’s sort of like football or rugby on skates, but with no balls.”

Jammers have to get through the pack once before they can score. After that, a jammer scores one point for each member of the opposite team he or she passes. The team with the most points at the end of the hour-long bout wins.

Carbone said derby isn’t for the faint of heart, and injuries like broken ankles, limbs and bruises do happen.

“It’s inevitable,” she said. “You’re a human on wheels crashing into other humans on wheels.”

Still, she said, it’s not unsafe.

Skaters wear helmets, knee pads, elbow pads and wrist guards and have to complete safety training to learn how to hit and how to take a hit. Beginners have to go through DSRD’s Skater Tot program to learn the game and must pass a skills and endurance assessment before they are cleared to play with a home team.

After a skater makes it through the Tot program, they get their skater name. Carbone said skater names have been around since the sport was conceptualized and are an important aspect of a player’s identity.

“Some people need a name to kind of assume a persona on the track that they may not be in real life, so you have to decide who you want to be,” Carbone said. “It’s a right of passage and a thing that’s known.”

New to the league this year is head coach Shaun Malone, who lives in Oxford, Pa., and skates under the name “Marty Graw.”

He used to coach one of the Charm City Roller Girls teams in Baltimore before becoming a non-skating official for the Wilmington Ruff Rollers (DSRD) in 2009. After that, he played on a team in Baltimore for a while and earlier this year, rejoined DSRD as head league coach.

He said he’s looking forward to coaching a league with such a long history in the area, and noted that for a skater-owned and operated, do-it-yourself league, 10 years is impressive.

DSRD has had its ups and downs over the years and Malone said players have dropped out for various reasons, but people are starting to come back.

“You miss it after a while,” he said.

He has high hopes for this season – home teams play until July and the travel team plays August through November – and for the future of the league, which he said relies heavily on new skaters graduating from the Tot program and getting drafted to one of the homes teams. As long as people continue to love derby and it stays an intramural sport in Delaware, he said DSRD will live on.

“If it becomes professional, I think it’ll draw some people away,” Malone said. “The good thing about DSRD is that you can still be competitive, but the most important thing is that we have fun together.”

That’s why league president Natalie Hyman, 34, of Elkton, Md., joined DSRD four years ago. She said the chance to make friends, have fun and be part of a team were the main reasons she strapped on her roller skates to play derby as “Senora Matadora.”

Hyman, who described herself as a “big girl,” said that unlike other sports, derby is unique because it celebrates women of all different shapes and sizes. She said that in derby, a big butt is great for blocking out jammers and strong, thick thighs are good for skating and endurance.

No one is physically inclined to be a derby skater, which is why the sport is so inclusive, Hyman said.

“It doesn’t matter if you’re older or younger, small or large, no matter what body image you have, it’s amazing what roller derby can show you that your body can do,” she said.

She admitted she wasn’t a very good derby player at first – she’s still working on a few skills – but that never mattered to her teammates, who are now some of her closest friends. They supported her and cheered her on and she was shocked at the amount of positivity and camaraderie.

“I couldn’t walk away from that. It’s the most positive place I’ve ever been,” Hyman said, adding that DSRD even has a rubber ducky named “Posi” that they keep on their bench to remind players to focus on positivity and teamwork.

“Derby definitely is second family,” she said. “There are jokes that it’s stronger than the mob because you never really get out of it. People retire and then they come back to visit all the time.”

DSRD’s next bout is Sunday, May 15 at 6 p.m. at the Christiana Skating Center. Tickets are $10 in advance, $12 at the door and free for children under 10 years old.

The schedule on their website only lists matches in September and October and don't even know if that was last year or this year. Why bother with this article if the Newark Post or the website doesn't list when they play?