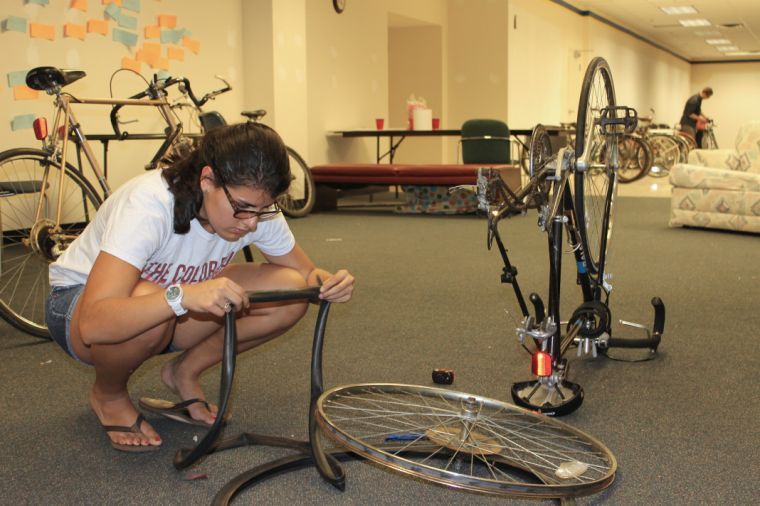 Karol Oviedo, a volunteer at the Newark Bike Project, fixes a tire on her bike at the organization’s new home on Main Street. 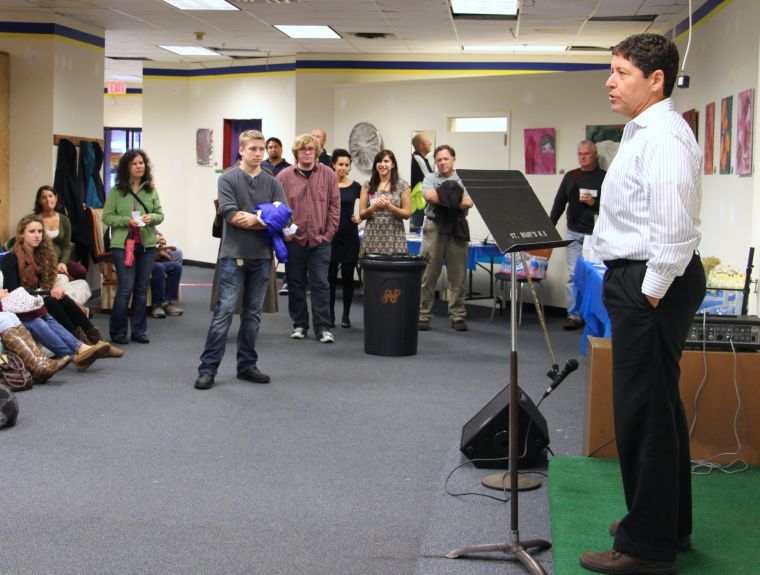 Karol Oviedo, a volunteer at the Newark Bike Project, fixes a tire on her bike at the organization’s new home on Main Street.

The community-oriented Newark Bike Project has a new home – one much larger and more prominent than its old one.

In August, board members, volunteers and clients of the Newark Bike Project went to the previous location on South Main Street for the last time. They packed the tools and bike parts, loaded the bicycles on a rental truck, emptied the store and closed its doors – only to reopen in the former Delaware Book Exchange building on Main Street.

Two months later, the group is settling in to its new home and last week held the official grand opening ceremony for the new facility.

The Newark Bike Project is a community repair shop where bikers can learn how to repair their bike, acquire bike parts or buy a used bike. The mission of the shop is to educate, create community and empower folks in a way that encourages sustainability, according to board member Rory Murray.

The group was founded in November 2011 and was inspired by the Urban Bike Project in Wilmington, a non-profit organization focusing on education and mechanical self-reliance. The store was first located in a 2,000-square-ft. storefront at 7 S. Main St. After the building owner announced he would tear down the property, the Newark Bike Project had to relocate.

The shop moved to 58 E. Main Street, where the Delaware Book Exchange and T’Licious used to be located. Angela Tsionas-Matulas, the owner of that building, is planning to tear down her propriety in 10 months and offered the empty space to the Newark Bike Project on a temporary basis for a cheap rent, Murray said.

“This is an amazing spot, right in the center of Main Street,” Murray said. “There is a huge amount of people walking by, and business definitely increased since we moved here.”

The new store is 9,000 square feet, which allows the Newark Bike Project to have three more mechanic stands, resulting in volunteers being able to help 50 percent more costumers. The new space also allows for an inside test drive, where customers can test their new purchases or their repaired bicycles, and provides additional storage space, resulting in the store being able to take more bike donations, its main source of revenue.

On a recent evening, Zyair Brown, a junior at the University of Delaware, was purchasing her second bike at the Newark Bike Project. She acquired her first bike from the old store on South Main Street, but it got stolen and she came back to the store to find a new one.

She said she enjoys going to the Newark Bike Project for its friendly and relaxing environment. She said she can find good quality bikes at a fair price and knows she will receive good advice.

She also said she likes the store’s new location and she believes it will allow the Newark Bike Project to compete with the other bicycles shops on Main Street.

“I think it is a much better idea as so many more students are on Main Street,” Brown said. “It gets more attention as it is on the front of Main Street and if you are in a good place, you get more business.”

Murray said the group still does not know where it will be relocating in 10 months after the building is torn down. He said he hopes the group can find a suitable long-term location.