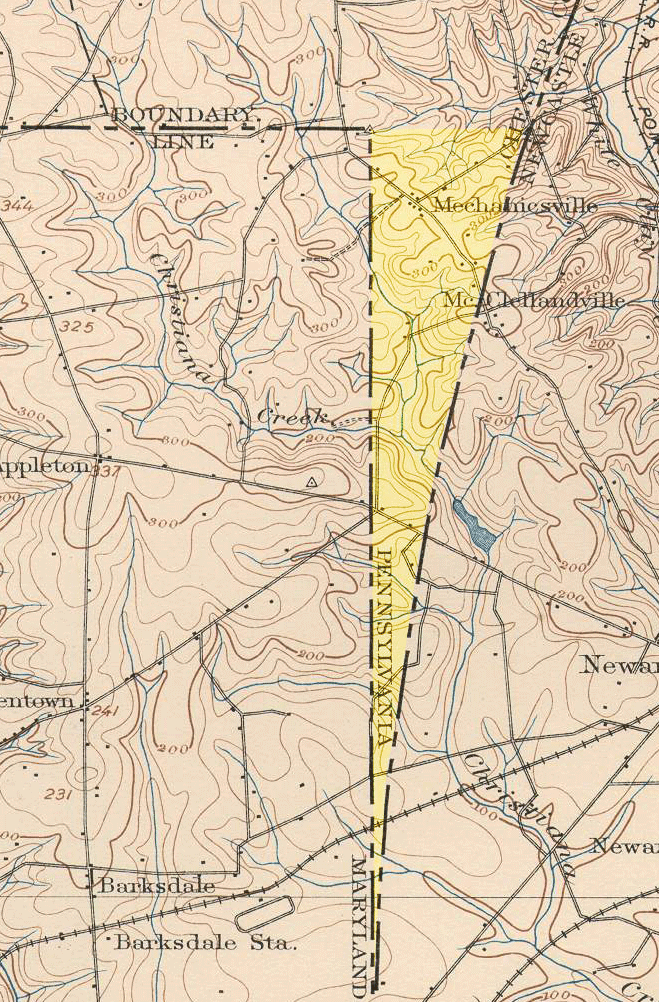 An 1898 United States Geological Survey view of the “wedge” area between Delaware and Maryland. This wedge of land, resulting from surveying oddities in colonial times, was the space left between the North Line --Maryland’s eastern borde r--a nd the Twelve-Mile Circle --Delaware’s western border. The land now belongs to Delaware, but, in this 1898 map, was considered a part of Pennsylvania. 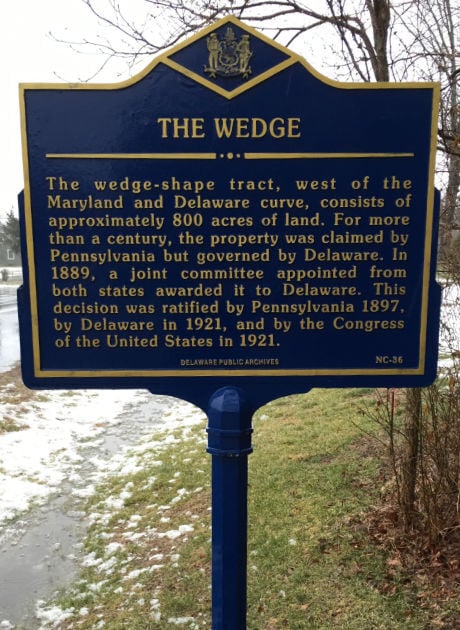 The Wedge refers to the 800-acre, wedge-shaped area in the far northwest part of Newark, where Delaware, Maryland and Pennsylvania meet.

An 1898 United States Geological Survey view of the “wedge” area between Delaware and Maryland. This wedge of land, resulting from surveying oddities in colonial times, was the space left between the North Line --Maryland’s eastern borde r--a nd the Twelve-Mile Circle --Delaware’s western border. The land now belongs to Delaware, but, in this 1898 map, was considered a part of Pennsylvania.

The Wedge refers to the 800-acre, wedge-shaped area in the far northwest part of Newark, where Delaware, Maryland and Pennsylvania meet.

New Castle County government had some fun on social media for April Fools’ Day, tweeting that it is giving The Wedge – a triangular-shaped area near Newark with a colorful history – back to Pennsylvania.

“Per the terms of our 100-year rental agreement with Pennsylvania, we’re returning The Wedge to our neighbors to the north today,” the tweet read. “Best of luck to all the former First Countians living there, please see @ChescoGovt for all your County needs.”

There’s some truth to the county’s math – it has, indeed, been 100 years since a long-running land dispute between Pennsylvania and Delaware was settled, enshrining The Wedge as part of the First State. However, it wasn’t a 100-year lease, but rather the decision of a committee that was eventually ratified by Congress.

The Wedge refers to the 800-acre, wedge-shaped area in the far northwest part of Newark, where Delaware, Maryland and Pennsylvania meet. For a general sense of the geography, picture the aptly named Wedgewood Road.

The land dispute traces its origins to Colonial times when the Calverts owned Maryland and William Penn owned Pennsylvania and the Lower Three Counties that eventually became Delaware.

Because the two surveys didn’t quite line up, there was a wedge-shaped space left between the North Line (Maryland’s eastern border) and the 12-Mile Arc (Delaware’s western border). The space was claimed by both Pennsylvania and Delaware.

For many years, The Wedge was known as a lawless no-man’s land – full of bootleggers and illegal gamblers – because neither state could decisively claim jurisdiction. In 1889, a committee appointed by the two states awarded the land to Delaware. Pennsylvania ratified the border a few years later. Delaware didn’t get around to ratifying it until 1921, and Congress quickly followed suit, making it official.

So what would Newark have lost if the county actually did give the Wedge back to Pennsylvania?

Well, for starters, residents of Amaranth, Chippenham Woods, Country Hills and parts of Covered Bridge Farms, Christianstead, West Branch and Christine Manor would all be Pennsylvanians. So, too, would the well-known Newark artist Wynn Breslin, who spent her career painting the scenery of The Wedge from her home overlooking White Clay Creek Valley.

Part of White Clay Creek State Park, including the Carpenter Recreation Area and the bandstand, would belong to the Keystone State. So would the W.L. Gore plant on Barksdale Road, Head of Christiana Presbyterian Church and Nutter’s Sandwich Shoppe – meaning anyone looking for their fix of Nutter’s crab bisque would find themselves paying sales tax.

Delaware would also lose its share of the Tri-State Marker, which was placed by Mason and Dixon to indicate where the three states meet and today is a popular destination for hikers. Ironically, though, such a move would actually make the marker more accurate – the stone was placed before Delaware broke away from Pennsylvania, and thus, mentions only Pennsylvania and Maryland.

However, the City of Newark – still riding high from prevailing in its recent legal battle with the county over taxes – may not have given up The Wedge without a fight.

Meanwhile, while New Castle County spent its April Fools’ Day giving away The Wedge, the State of Delaware was making a land grab. The state tweeted that it was annexing New Jersey and calling the combined land “New Delaware” – part of Delaware’s long-running, tongue-in-cheek Twitter feud with the Garden State.

Delaware went even further, hitting New Jerseyans where it hurts.

“Jughandles will be banned, and the full coastline will be ‘the beach,’” Delaware tweeted.