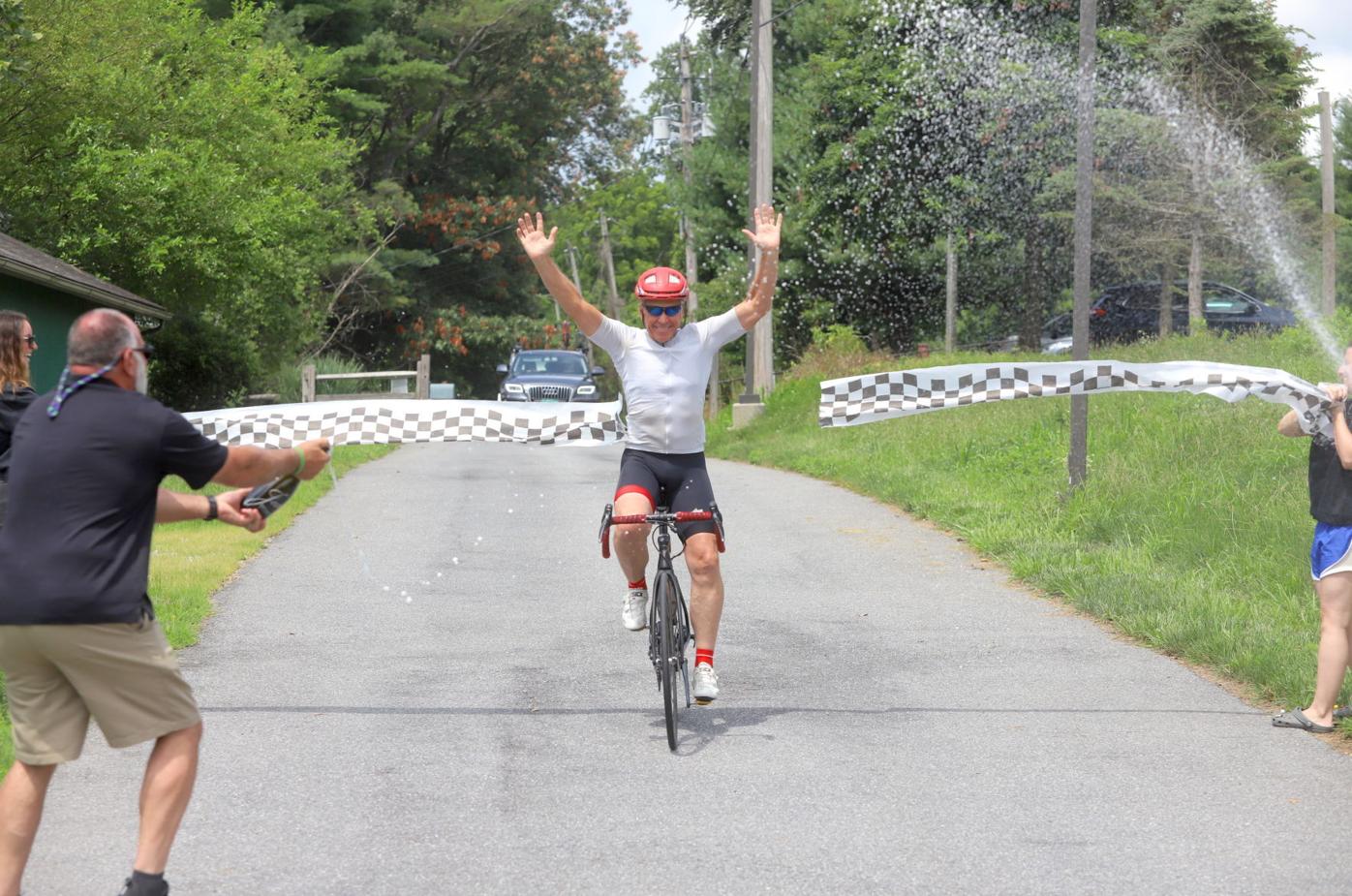 Peter Wiswell arrives at Tri-State Bird Rescue and Research near Newark on Saturday after a 3,600-mile bike ride across the country. 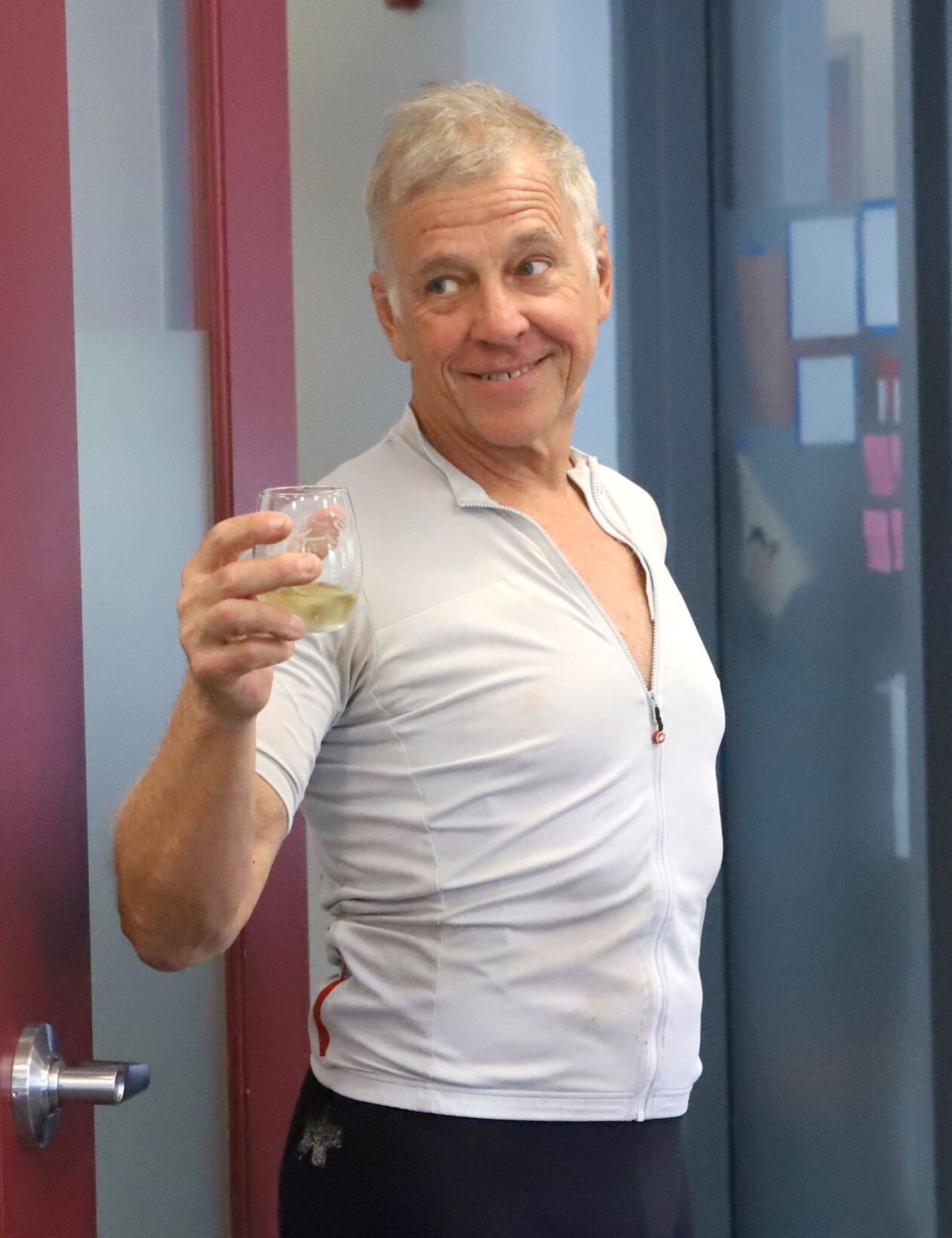 Peter Wiswell celebrates with a toast after his 3,600-mile bike ride across the country. 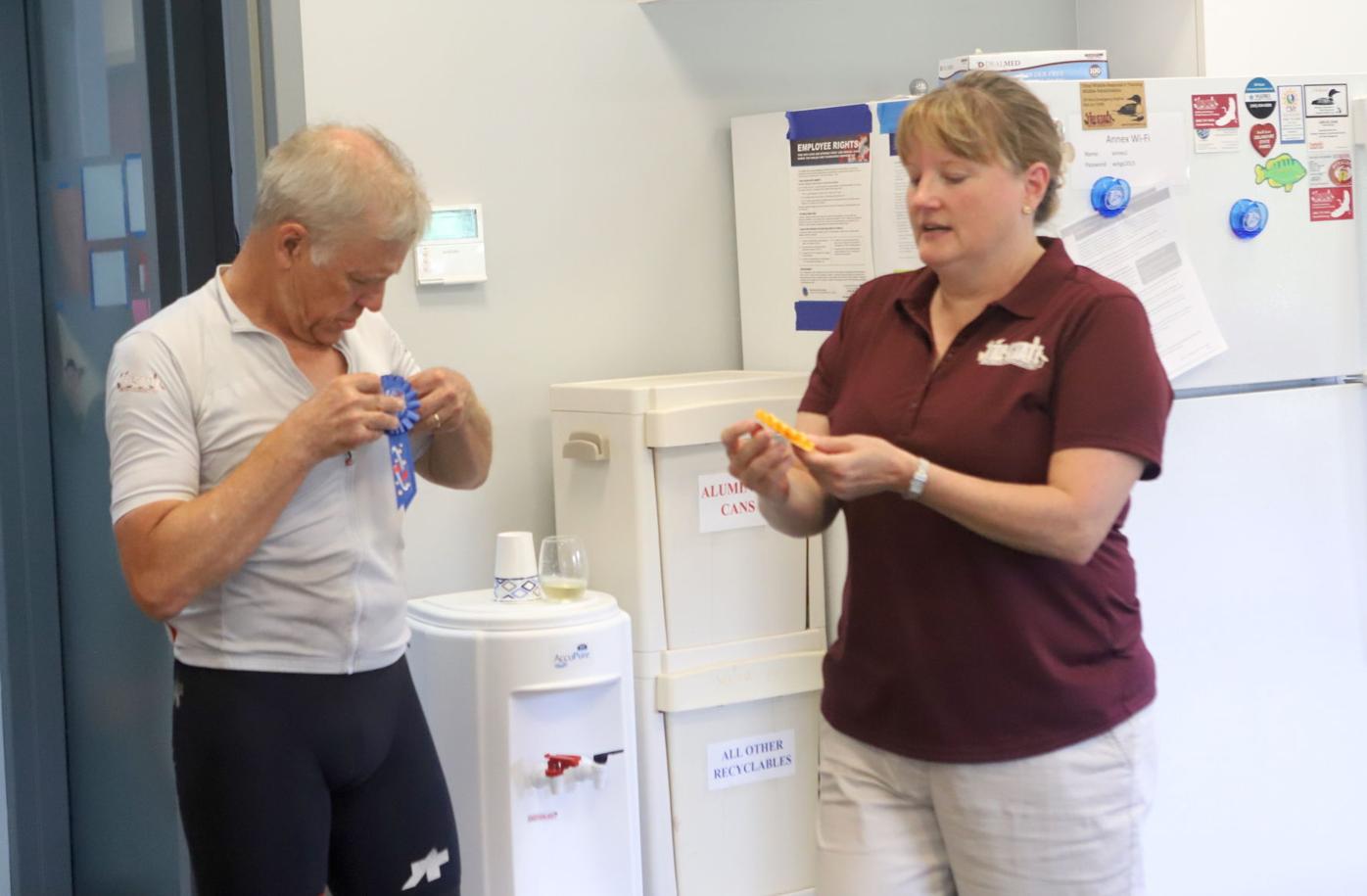 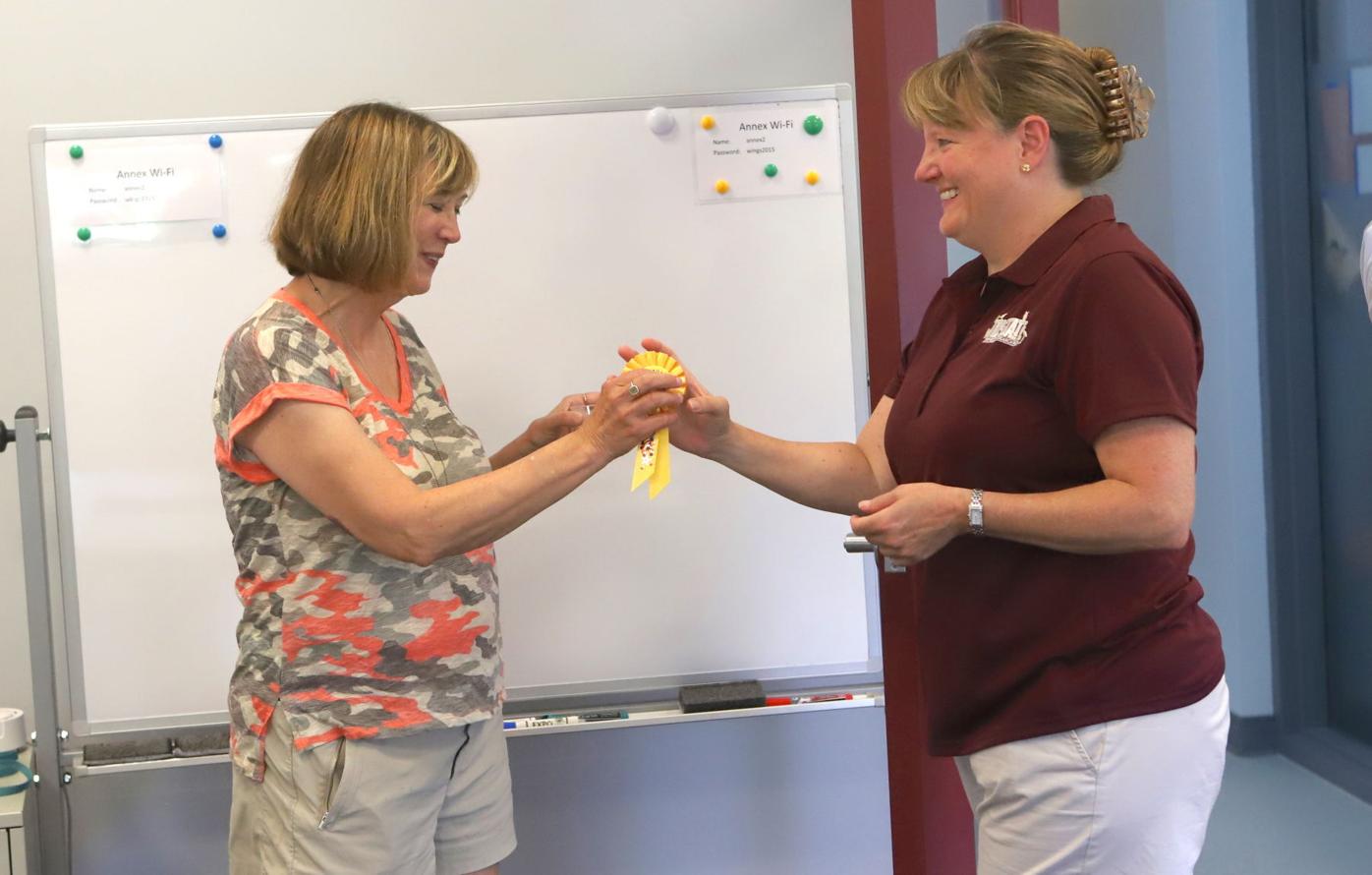 Lisa Smith (right), executive director of Tri-State Bird Rescue and Research, thanks Rena Wiswell for her role in the fundraising effort. 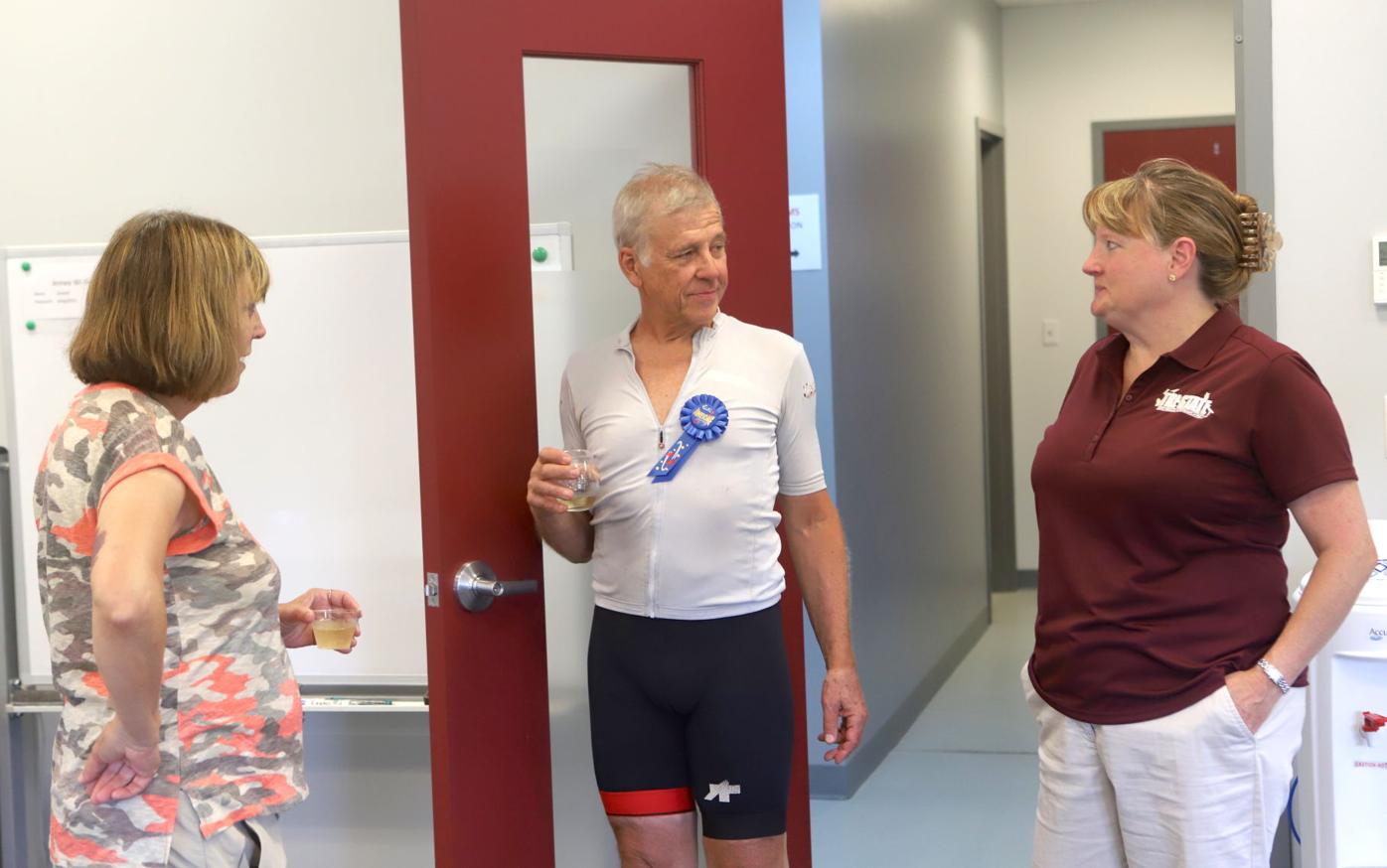 Lisa Smith (right), executive director of Tri-State Bird Rescue and Research, thanks Peter and Rena Wiswell for their fundraising efforts.

Peter Wiswell arrives at Tri-State Bird Rescue and Research near Newark on Saturday after a 3,600-mile bike ride across the country.

Peter Wiswell celebrates with a toast after his 3,600-mile bike ride across the country.

Lisa Smith (right), executive director of Tri-State Bird Rescue and Research, thanks Rena Wiswell for her role in the fundraising effort.

Lisa Smith (right), executive director of Tri-State Bird Rescue and Research, thanks Peter and Rena Wiswell for their fundraising efforts.

When Peter Wiswell biked down Possum Hollow Road and onto the Tri-State Bird Rescue and Research campus, he raised his arms in celebration as he broke through a finish line ribbon and Tri-State employees sprayed him with champagne.

His arrival in Newark on Saturday morning capped a 3,600-mile solo bike ride that lasted 69 days and took him through nine states as he crossed the country from the Pacific to the Atlantic – an undertaking meant to raise money for Tri-State.

“It’s a nice feeling. There were times when I didn’t know we were going to make it,” said Wiswell, who turns 70 next month.

So far, Wiswell’s journey has raised more than $40,000 for Tri-State, which plans to use the money to buy a new truck for its Oiled Wildlife Response Team. The team has traveled all over the world to treat birds and other animals affected by oil spills.

“It’s an amazing effort,” said Lisa Smith, executive director of Tri-State. “Nobody has ever done a fundraiser like this for us.”

Smith said the nonprofit needs to replace its aging oil response truck, which is used to transport people and supplies to wherever they are needed. If the spill is within five hours of Newark, the team will bring the oiled wildlife back here for treatment. For longer distances, they set up a mobile treatment center. Sometimes, they treat a handful of animals, and other times an incident involves as many as 2,000, such as the 2010 Deepwater Horizon spill in the Gulf of Mexico.

Wiswell became familiar with Tri-State through his work as an insurance adjuster. His company, Global Risk Solutions, handles insurance claims related to oil spills and other marine disasters and often hires Tri-State to handle wildlife recovery and rehabilitation.

“They are dependable, affordable, good people to work with. It was a great relationship, but we’re always a little bit on different sides because I was trying to save as much money as I could,” he said. “After I retired, I wanted to see if I could do something to help Tri-State out because they do such a wonderful, wonderful job.”

An avid cyclist, Wiswell had always wanted to do a cross-country ride and decided to combine that with his desire to raise money for Tri-State.

“COVID put us off for a year, and when the masks came off, we were off to the races,” he said.

Wiswell, his wife Rena and their dog Lulu left their home in Connecticut on April 16 and drove to California, stopping along the way at national parks and other sightseeing destinations.

On May 3, he started his ride in San Francisco, with Rena and Lulu following behind in their vehicle. Most nights, they slept in a small pop-up trailer.

Averaging more than 50 miles a day, the trip took Wiswell through Nevada, Utah, Colorado, Kansas, Missouri, Illinois and Kentucky before ending at the Atlantic Ocean in Virginia on July 9. He then drove to Newark for a victory lap at Tri-State.

“What an unbelievably beautiful country we have if you go on the secondary roads of America that are a far cry from the interstates,” Wiswell said.

“Flat old Kansas – spectacular,” he said. “It was springtime. The turtles, the wildflowers, the wheat coming up.”

The best part, though, was the people he met along the way.

“From coast to coast, the most incredible people you can imagine,” Wiswell said. “In every state and every town, Americans that wanted to help, that wanted to support. They’d give us water. I’d go by a bike shop and need some parts, and they wouldn’t take the money.”

Tri-State is still hoping to reach its goal of $75,000. To donate, visit tristatebird.org/wheelsforwings.