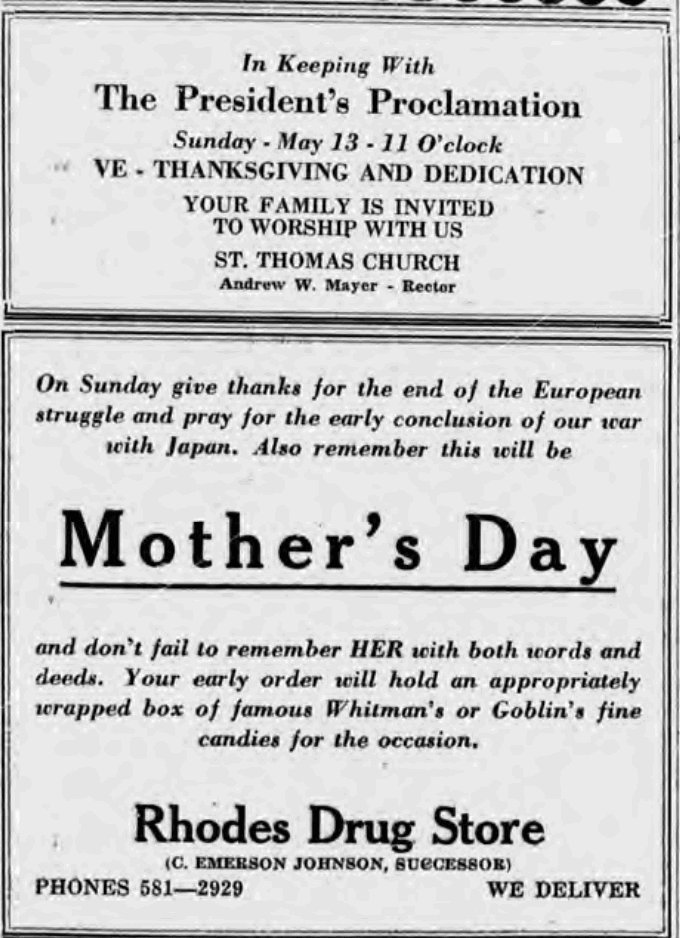 This week’s Out of the Attic item is a 1945 Newark Post headline announcing the end of fighting in Europe, as well as two ads celebrating the victory.

The Germans surrendered to the Allies exactly 75 years ago – May 8, 1945 – a day that became known as V-E Day. Three months later, the Japanese would surrender, marking the end of World War II.

“Local reaction was one primarily of quiet thanksgiving and observance with no planned response,” the Newark Post reported at the time.

Most Newark stores closed, posting signs reading, “Closed in celebration of V-E Day.” Newark High School held a brief assembly, featuring patriotic songs by the school chorus and a prayer by the Rev. Andrew Mayer of St. Thomas Church, and then sent students home early. The University of Delaware also closed for the day.

Officials immediately lifted the midnight curfew as well as the blackout restrictions that were intended to protect against enemy attacks.

“The State Theatre marquee once more blazed forth its scintillating message in multi-colored lights. Merchants windows, long dimmed, were once again profusely lighted, as were outside electric and neon signs,” the Post reported.

Out of the Attic is produced in partnership with the Newark Historical Society. The Newark History Museum is located in the old train station under the South College Avenue bridge. Admission is free. For more info, call 302-234-4145 or visit www.newarkdehistoricalsociety.org. Do you have an old photo to share with Newark Post readers? Contact editor Josh Shannon at 443-907-8437 or jshannon@newarkpostonline.com.