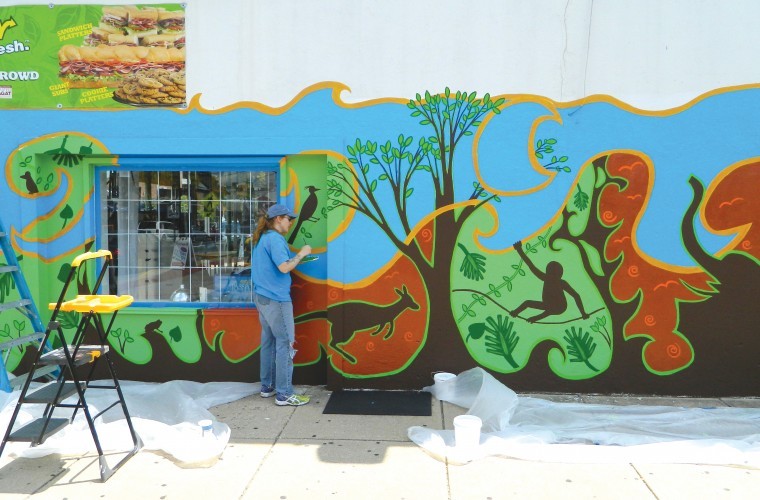 A kangaroo, an elephant and two monkeys made their debut on Main Street this month in a new jungle-themed mural created by local artist Dragonfly Leathrum.

Leathrum, 42, created the mural in Traders Alley between Cameras Etc. and Iron Hill Brewery with some help from her art students at Layton Prep and her private students from other local schools.

“This mural is mainly for the kids,” Leathrum said. “It has animals and bright colors.”

Leathrum said she hopes the mural draws attention to its surrounding stores, such as Village Imports Fair Trade. The mural’s colors were inspired by the Subway sign that hangs above it, she said.

Leathrum has painted eight other murals in the area. To paint a mural in town, she has to obtain permission from the Newark Arts Alliance, the City of Newark, and in this case, landlord Paul Schlosser. Leathrum said there is usually a questionnaire that asks community members what they want in a mural, but the idea and design for this one were all hers.

“I wanted something a little more colorful and abstract than I usually do,” she said.

Leathrum said she thought about things that would be fun and make her happy. She decided on the animal silhouettes and big blocks of color.

Since there was not a lot of detail work in this mural, she said the students weren’t too intimidated to help paint it. Instead of class, her students had the option of painting the mural for an hour every day. They worked on it for about two weeks, during which they cleaned the wall, prepped it with a white coat, drew the design and layered on four coats of paint.

“There’s nothing like painting on a public wall and getting paid for it,” she said.

Some of Leathrum’s other murals are in the Newark Community Center, by Panera Bread and across from the Newark Shopping Center.

The most popular part of this mural has been the kangaroo, and she said she’s been asked a few times why she put a kangaroo in a jungle.