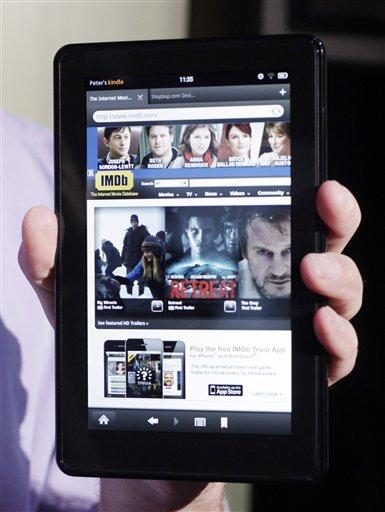 FILE - This file photograph taken Sept. 28, 2011, shows the Kindle Fire at a news conference, in New York. Amazon.com, Inc. announced Monday, Nov. 28, 2011, that this Black Friday was the best ever for the Kindle family and the popular Kindle Fire remained the bestselling product across all of Amazon since its introduction 8 weeks ago. (AP Photo/Mark Lennihan, File)

FILE - This file photograph taken Sept. 28, 2011, shows the Kindle Fire at a news conference, in New York. Amazon.com, Inc. announced Monday, Nov. 28, 2011, that this Black Friday was the best ever for the Kindle family and the popular Kindle Fire remained the bestselling product across all of Amazon since its introduction 8 weeks ago. (AP Photo/Mark Lennihan, File)

Amazon.com, Inc. announced it will spend  $90 million to open a new 1  million-square-foot fulfillment center in Middletown as the final step in expanding to the fast-growing  community was completed.

The deal became final  Friday night  after the company’s real estate developer settled on a transaction for the  land  on Classic Drive near Levels Road. Amazon.com  says it will create  more than 850 full-time jobs at the new center.

“We welcome Amazon's expansion in Delaware, which will mean a significant number of jobs for many skilled and talented Delawareans who want to get to work,” said Gov.  Jack Markell. “The company’s expansion is a credit to the hard work taking place throughout the state to attract top-notch employers.”

The Middletown facility will be Amazon's second fulfillment center in Delaware. While Amazon.com’s first center on the East Coast opened in New Castle in 1997, the company had not expanded further in the state until the most recent  announcement.

Amazon will keep the New Castle Center open. The site employs hundreds of workers, with the  size of the workforce varying with the time of the year. The same will be true in Middletown.

The center is expected to provide a boost for the Cecil County ecnomy, which has seen a lower unemployment rate of late, due in part to growth in distribution center jobs in the county and adjacent areas.

“We look forward to opening our second facility in Delaware this year, creating more than 850 new jobs in the state,” said Dave Clark, vice president, global customer fulfillment. “We’re grateful to state, county and local leaders who have committed to Amazon jobs and investment.”

Amazon.com has been growing rapidly, aided by the success of its Kindle line of electronic readers and the company’s ability to supply books and other content to the devices. It has also benefited from the trend toward online shopping an ability to serve as a “store front” for other online retailers.

In addition to the Kindle and its online sales prowess, Amazon  has become a major supplier of computer capacity, via the “cloud,”  a term used to describe computer server farms in Amazon data centers.  Amazon.com customers  then pay for the data storage, rather than build their own centers.

Its success has not been universally praised, with critics claiming it is now targeting small retail businesses with its offerings, while gaining incentives from local and state governments. States and local governments  note that they have little choice but to try to land big employers, given the state of the economy and the changeover to online retailing.

In December, the Delaware Economic Development Office developed   a  $3.47 million package  from the Delaware Strategic Fund to support the expansion Of that amount, , $2.12 million will help create new jobs at the site. As part of the agreement, jobs at the new center will be in addition to the existing Delaware employment. The fund will also contribute to the company’s infrastructure investment, equal to 3 percent of the total capital expenditures, or a maximum of $1.35 million.

A separate grant for up to $4 million from the Delaware New Jobs Infrastructure Fund will be used to build extensions of  roads to serve the project, improve traffic flow and provide access to additional properties for future economic development. The site has access to Route 301, a crowded highway with heavy truck traffic.

“Fourteen years ago, Amazon chose Delaware for its first East Coast fulfillment center,” said Alan Levin, director of the Delaware Economic Development Office.  “The advantages of our quality workforce and strategic location still hold true today. The company’s expansion in Delaware is a testament to that fact, and a result of a positive, collaborative effort between the state and the town of Middletown.

Amazon will also receive a property  tax abatement from the town of Middletown for the next 10 years.

“We are truly excited Amazon has selected Middletown as its new home,” said Middletown Mayor Kenneth Branner. “This project is a win-win all around, for the town of Middletown and the state of Delaware. The new jobs would be a jump start to our economy and bring additional employment growth to our area.”

Amazon’s new facility is expected to be completed this fall.

Amazon.com, Inc.  a Fortune 500 company based in Seattle, opened on the World Wide Web in July 1995. - Doug Rainey contributed to this story.

At their January 9 meeting, the Mayor and Council of the Town of Middletown approved the con…

A 1 million-square-foot warehouse proposed for Middletown could bring nearly 2,500 jobs to t…